For the first time since 2016, Virat Kohli is taking rather than giving orders. It’s a seismic shift that can go one of several ways for India, world cricket and the man himself, writes JACOB KURIYPE. 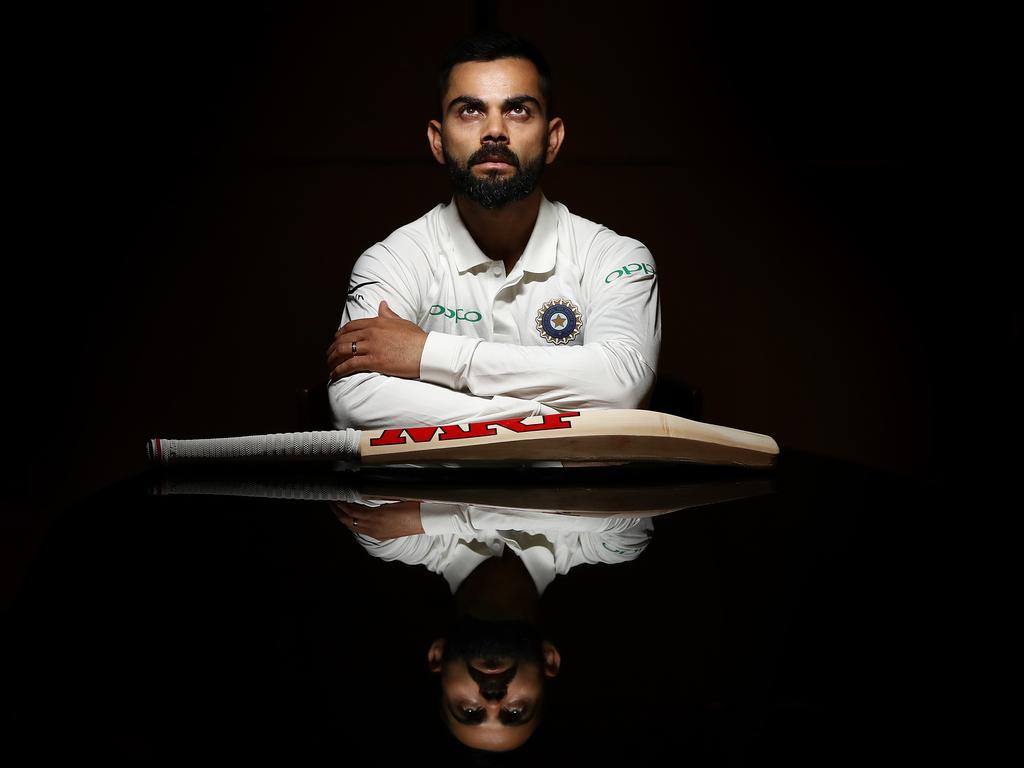 With the flip of a coin, a new era in Indian cricket began on Wednesday at Paarl in South African wine country.

The man calling the toss was KL Rahul, not Virat Kohli.

For the first time since 2016, Kohli had to take rather than give orders. In the space of 69 days, his captaincies of India in all three formats have disappeared, one by one.

It’s a seismic shift for a man who in one way or another has always been defined by the captaincy. Even throughout Kohli’s early years on the world stage, he had been earmarked as a captain in waiting.

Which begs two questions: who is Kohli without the captaincy? And what is India without Kohli leading the way?

Kohli is undeniably one of the batters of his generation, but until recently being the man in charge had seemed to carry him to greater heights. Numbers alone speak to that. Up until 2020, he averaged 63.80 in Test cricket as captain, 77.60 in ODIs and 46.47 in T20Is, the one format where he has fared better without the (c) next to his name. 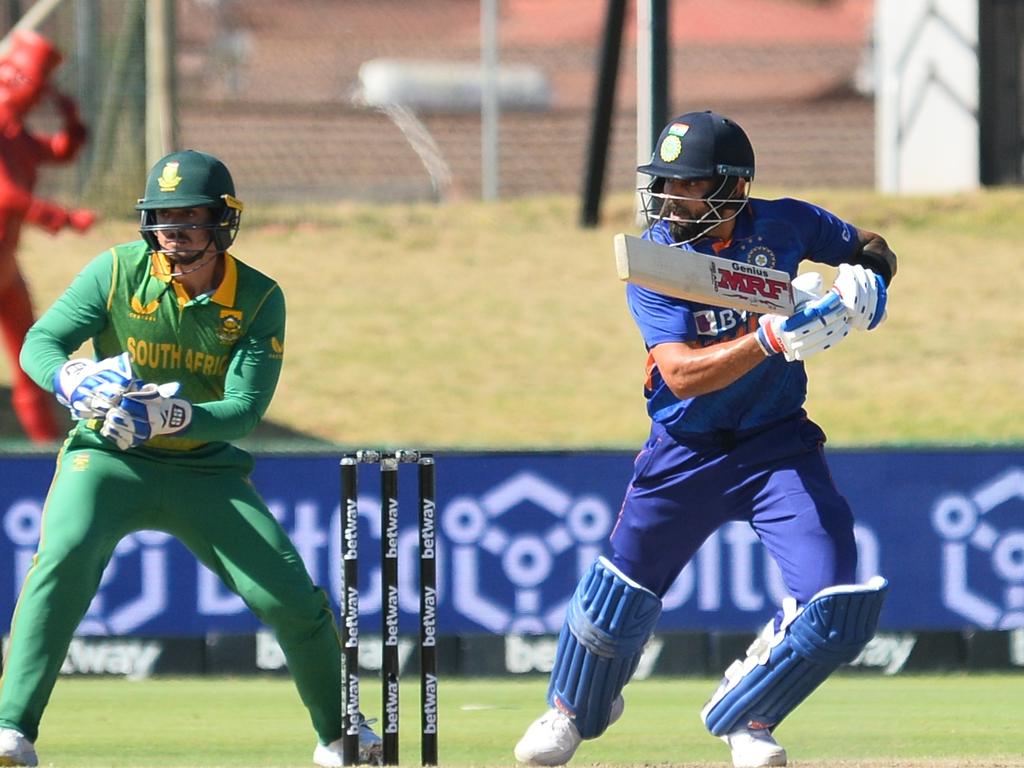 Virat Kohli scored 51 in his first ODI since being stripped of the captaincy. Picture: Grant Pitcher/Gallo Images/Getty Images.

From his first Test in charge, marked with twin centuries in the emotion-charged Adelaide epic following Phil Hughes’ death in 2014, Kohli’s captaincy lot seemed cast. This was a man who would lead from the front, using the responsibility to spur him on rather than weigh him down.

In the past two years, that hasn’t felt the case. In 2020, he endured his first calendar year as an international cricketer without a century and the drought continued throughout 2021. The numbers weren’t terrible in either white ball format but they were in Test cricket; he has averaged 28.14 since the start of 2020, with six fifties across 27 innings. He has rarely looked out of sorts throughout this period, but he has looked tired. Once cricket’s great converter, none of his last 21 fifty-plus scores as captain reached triple digits; though in fairness, there were five not-outs. He extended the run to 22 overall with his score of 51 in India’s 31-run loss to open the ODI series against South Africa.

In 2017, still early in his captaincy tenure, Kohli spoke of potentially playing on until he was nearly 40.

Now the question for Kohli, 33, is whether relinquishing the captaincy extends his playing days or hastens the end of them. Whether he has unburdened himself or put out the pilot light. From what Kohli has said so far, he believes it to be the former.

He cited workload management when he stepped down as T20I captain, and conceded he could no longer give “120 per cent” to being Test captain when he resigned from that role.

Kohli’s knock on Wednesday provided hope but not concrete evidence he will flourish without the captaincy. While he looked at ease on his way to a half-century, he failed to guide the team home from there as he once did so regularly.

Having captained Australia 271 times (93 Tests, 178 ODIs), Allan Border is well aware of the toll being skipper for an extended period can take, particularly given his own captaincy – largely a lone hand for a long time – came with a different, but not incomparable set of challenges to Kohli’s.

“When you’re captain you are watching every ball, which takes its toll – mental exhaustion kicks in,” Border says. “He can now concentrate on his game and not throw everything into the team.

“That’s one of the problems of being captain. Sometimes you can neglect your own game and that’s the worst thing you can do. I think that’s what has happened with him. His game has just dropped off in the last couple of years.

“It will be good for him to just play as a senior player. He can just relax a bit more and score a mountain of runs, which he hasn’t been doing in recent times.” Nevertheless, Kohli’s call to step down as Test skipper is a brave one, given the thinly veiled bickering between himself and the BCCI since his decision to finish as T20I captain.

Few national sporting bodies are as powerful or ruthless as the BCCI and Kohli all but accused the organisation’s president, Sourav Ganguly, of lying in November. The day after the BCCI stripped Kohli of his ODI captaincy, Ganguly claimed to have earlier asked Kohli not to resign as T20I captain. That was refuted by Kohli, who said the BCCI had seen his decision as “progressive”. He took things further by revealing he had only been informed of his removal as ODI captain a day before the news was made public.

Having aired the organisation’s dirty laundry, Kohli voluntarily giving up some of his own power at a critical stage of his career leaves him as vulnerable as he has ever been to the moods of India’s decision makers.

Given everything he has done for the game, and Test cricket in particular, you hope he is given the long leash he deserves.

While Kohli’s enthusiasm for the game has sometimes pushed the boundaries too far, it has also been infectious. India has always loved Test cricket but his passion for the format has made a telling difference to its status in a bat and ball-obsessed nation.

“He has shown that Test cricket is No.1 in his eyes and as Indian captain that is a huge fillip for the game. I applauded that stance he took,” Border says.

“It was vital [that he did]. Just in that period that he became captain, Twenty20 cricket was starting to really force its hand with leagues popping up all over the place. It was gaining influence everywhere and Test cricket was being put in the back box in a lot of countries. His influence was enormous.

“If he had decided, ‘I’ve had enough of this game (Test cricket) and I think Twenty20 is the way to go’, who knows what might have happened because India are such a huge influence financially on the game.”

That’s why the question of who replaces Kohli as India’s Test captain feels a pertinent one globally. They won’t just be leading a team, they’ll be one of the format’s most important flag bearers. Putting that aside, finding the right replacement is a conundrum for India’s selectors because each of the obvious options comes with an asterisk.

With Rohit Sharma waiting in the wings, selectors had a ready replacement as limited-overs captain. It’s a tougher role to fill in Tests, particularly when continuity can be so vital to sustained success. Sharma has been India’s best Test batter since re-entering the team as an opener but throughout that time – and his entire career really – he has been regularly sidelined by injury.

Ajinkya Rahane has excelled as captain when called upon, but has recently been relieved of the vice-captaincy as he struggles for runs, his spot in the side tenuous. So too is Cheteshwar Pujara’s. Rahul captained in Kohli’s absence in the second Test in South Africa but is still not yet a long-term selection guarantee. Rishabh Pant has plenty on his plate as a 24-year-old wicketkeeper, so a leadership role feels premature. Ravichandran Ashwin shapes as a logical choice but his own security in the XI overseas could be a concern.

Whichever way India goes, the next man in charge will have sizeable shoes to fill.

By every measure, Kohli is India’s greatest ever Test captain. No captain has led the team more times in the format and none have been in charge of more victories (40 wins from 68 matches). Globally, only Graeme Smith (53), Ricky Ponting (48) and Steve Waugh (41) won more Tests as captain.

India’s success on the road is his greatest achievement, with the team’s 16 away victories the most it has achieved under any skipper, five clear of Ganguly. That includes a series win in Australia, Test victories in South Africa and a 2-1 series lead in England with a match to go (a series being played across two years after the final Test was delayed by Covid complications). His 11 Test wins as captain outside of Asia are the most by any skipper from the continent. 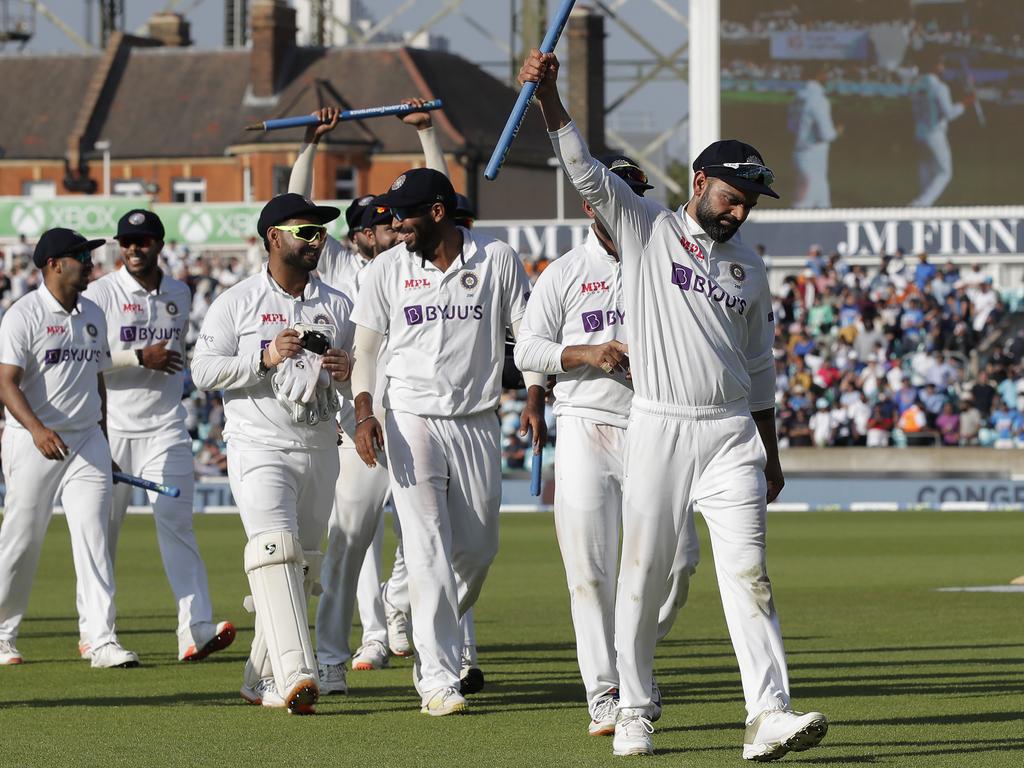 For a while now, India has seemingly been on the brink of being all-conquering in Test cricket. Back-to-back series wins in Australia, a chance to secure that triumph in England next year and South Africa now the lone frontier they have failed to overcome. The next man in charge will either go down as the one who took India that next step or let an empire slip through his hands.

The silver lining for India is that on paper they have the right man to coach them through this next delicate chapter in Rahul Dravid.

While Kohli stepped away from the captaincy by his own volition in two of the three formats, the dressing room still looms as a raw, delicate environment.

“He (Kohli) can’t be seen waving his arms around and moving fielders and things like that. He’s got to bite his tongue and wait to be asked for his input,” Border says.

“It was really good the way Cummins and Smith interacted and that will be the same sort of scenario for whoever captains India; to have that input, quiet exchanges with the former captain rather than him being front and centre.

“It’s just important how they manage that but they’ll be fine. He’s a very intelligent guy. He’ll just enjoy playing and being one of the senior guys.”

It’s nothing Dravid hasn’t seen before. After all, he himself took the reins from Ganguly and oversaw his reintegration into the side after his unceremonious axing at the hands of Greg Chappell. Dravid in turn was all grace when he then stepped down as captain, with Anil Kumble taking charge of a side featuring three former skippers including Sachin Tendulkar.

How he, Kohli and the next man in charge handle this new stage of Kohli’s career will determine where Indian cricket goes next.