While Justin Langer is familiar with the English cricket system, one former England paceman has declared it would be a mistake for the ECB to sign him as coach. Find out why. England Test great Steve Harmison has gone against the flow of opinion in the UK and declared it would be a mistake for the ECB to sign Justin Langer as coach.

Former captains Michael Vaughan, Nasser Hussain and Mike Atherton have all gone in hard calling for England to rush out and recruit Langer to save its Test team following the Ashes humiliation.

Langer has a tight relationship with ECB powerbroker Andrew Strauss and is familiar with the English system after years in county cricket.

Although wounded and mentally exhausted following the scrutiny on him in his final months in the job for Australia, Langer has signalled he wants to be a career coach, and leading England in an Ashes revenge mission against the players who had him ousted would be a story for the ages.

But Harmison has warned the ECB against Langer because, as much as he likes and respects his former Test opponent, he believes the issues that got him off-side with the Australian squad are likely to resurface with England’s stars. “I don’t think it would be right for JL to come into Eng­land. He probably needs a break,” Harmison said on The Cricket Collective podcast. “As much as I like JL as a person, as a character and a player, I don’t think it’s the right fit for England at this time.

“Nasser Hussain came in and told the world what he was going to do with (task master) Duncan Fletcher (in charge) back in 1999 and 2000, but it was a different game.

“Players were different players … and the system was a completely different system because of the financial resources that are in the game now. We need a different way and a different method.”

Harmison worries that the word of mouth from disgruntled Australian players about his coaching methods could impact Langer’s career.

“Where does Justin go from here? We’ve seen since the IPL has been going, the crossover of international dressing rooms now, people talk,” Harmison said.

“So whatever job Justin Langer goes into, there’s going to be somebody in there that’s close to one of the Australian players. That’s what disappoints me about the player power in this. Has this tarnished Justin Langer’s career?”

Although he didn’t believe England should go for Harmison, he said enormous pressure was now on Australia after getting their coach moved on. Why Langer should feel no guilt over potential England defection

Justin Langer might have a tattoo of a boxing kangaroo on his buttocks, but Australian cricket greats have urged him to cross enemy lines and coach England.

Former teammate Mark Waugh has declared Langer should feel absolutely no guilt or tentativeness about jumping the Ashes fence – should he want to continue as a career coach – after being “unfairly” shafted by Cricket Australia.

As England Cricket Board figurehead Andrew Strauss made it clear Langer holds great appeal to him personally as the man to take over the Ashes wreckage, former English captain Mike Atherton on Monday admitted perhaps the only obstacle to the most stunning coaching swap in the history of the game would be the fact Langer “bleeds” so much for the baggy green.

Fox Cricket expert Waugh said Langer might have played 105 Tests for Australia but needs no one’s blessing should he decide to take a job with England and spark an extraordinary build-up for the 2023 Ashes in the UK which would pit him against the Australian players who wanted him out.

“It’s up to him, obviously. It’s a high profile job, but a good job and it would certainly be a challenge for him and he’s not one to back away from a challenge, JL.

“I would have thought he would be a good candidate for that job. I don’t know who else is in line to get it, but he’d be one of the top ones I’m sure.

“If you asked Justin when he was a player would he ever help England out in any way he would have said definitely no, but things change once you’re a coach.

“It’d bring a different dynamic to it with JL coaching.

“Whoever you coach you want that team to win even if you’re an Aussie coaching England, so it’d be interesting.”

Matthew Hayden also backed his former opening partner to coach England, but conceded his personal wish would be for Langer to take time with his family.

It was only two years ago that another Australian Trevor Bayliss was coaching England and the possible coach swap would take on another level again if the experienced mentor was appointed by CA as Langer’s replacement.

Bayliss is content coaching the Sydney Thunder and taking other freelance opportunities, but sources believe he would listen to what CA has to say if they approach him.

Atherton said England must consider Langer, but it may come down to whether the West Australian can imagine himself in a blue tracksuit.

“There are two aspects to it: Would Justin Langer want to do it? He seems to be the type of guy that bleeds green and gold rather than the blue of England for sure, and it might be hard to see him in that position. 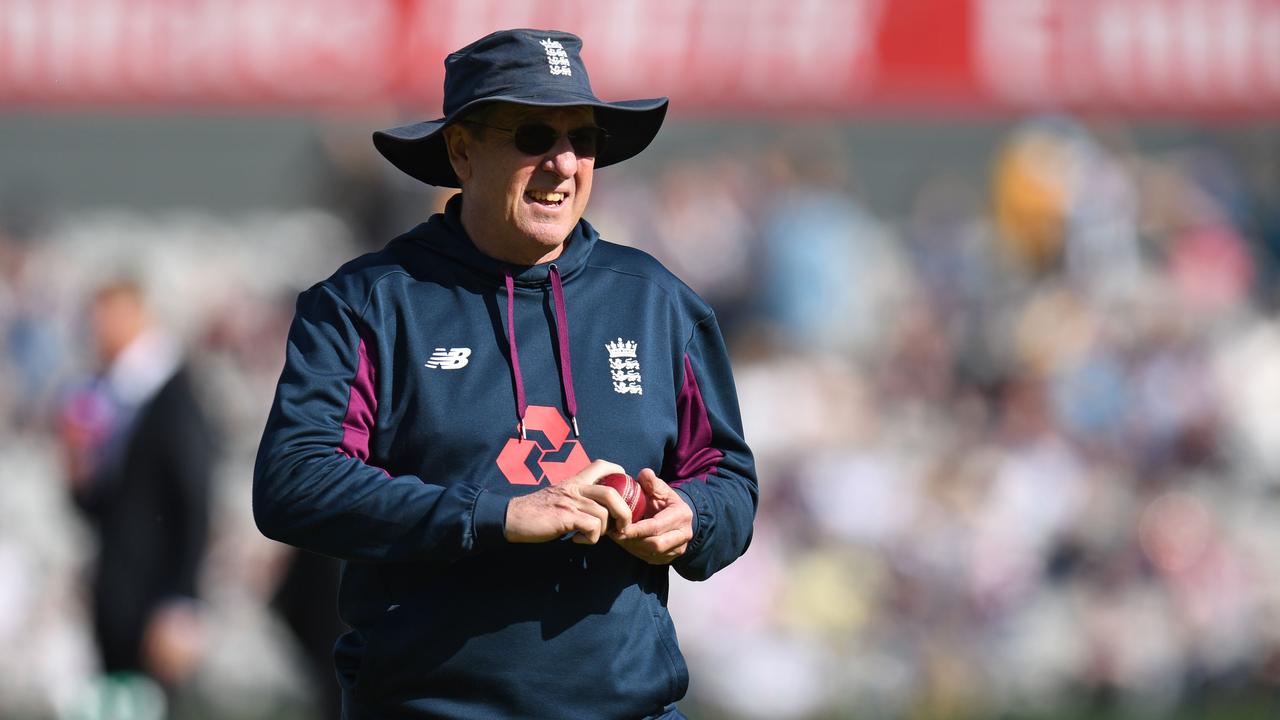 “He’s just had four years of very intense work with Australia, I think he’s just got home for the first time in six months, he’s not seen his family for a long time.

“England would want a permanent coach in place by the start of the summer, you’re talking May or June time in England.

“But there are certain things that would fit.

“He knows English cricket, he’s played county cricket, he knows Andrew Strauss well – they played together at Middlesex and have a high regard for each other.

“England are looking for somebody alongside Joe Root who has got a bit more drive if you like than perhaps was the case under Chris Silverwood’s coaching outfit.”