A sweltering stage 13 has seen the Tour riders come down from the frying pan in the Alps, straight into the fire, with conditions nearing 40C. Pedersen enjoys his moment of victory in St Etienne after a blisteringly hot stage over 192km. Picture: Michael Steele/Getty Images

A little after 1pm the Tour de France peloton departed Le Bourg-d’Oisans and 157 riders turned their backs to the Alps. They were heading west towards la France profonde. Down the Romanche valley they sped, the breeze at their backs, and with each turn of the pedals the mountains got smaller. They’d got through the Alps and it might be imagined that they were happy.

That’s not how it is at the Tour. Rather it is another day, more pain. The riders were going west, not in search of the Atlantic coast but towards the Pyrenees, where for three days next week they will tackle eight brutal climbs. They could live more easily with what’s to come if it weren’t for the transition stages.

There are three this year and this first one was typical — 192 kilometres over roads that rolled up and down, never staying flat. We are in the south but far from the mountains and further from the coast, so the air is stultifying and the roads heavy. Invariably it is unbearably hot on the transition stages.

For this 13th leg of the Tour, the needle hovered at about 38C. That was in the shade. The miracle is that so many still wanted to race. Most of the teams had a plan to get one of their men in the break. Mads Pedersen, the best rider in the Trek-Segafredo team, said he was determined to join any break that had four or more riders.

Ineos Grenadiers’ Filippo Ganna, Groupama-FDJ’s Stefan Küng and Movistar’s Matteo Jorgenson escaped after 30km. With Ganna’s engine, any breakaway has a chance. They were pursued by a group of counterattackers, a cumbersome pack too big to coalesce effectively. After 20km of futile pursuit, Pedersen, his teammate Quinn Simmons, Israel-Premier Tech’s Hugo Houle and Bahrain Victorious’ Fred Wright broke free to see if they could do better on their own.

Wright, 23 and in his second Tour, is having the race of his life. He rode exceptionally well into Lausanne last weekend and here he was again, looking to show he belongs at this level. They worked well to join the three in front. The seven would go on to dominate the race to Saint-Étienne. 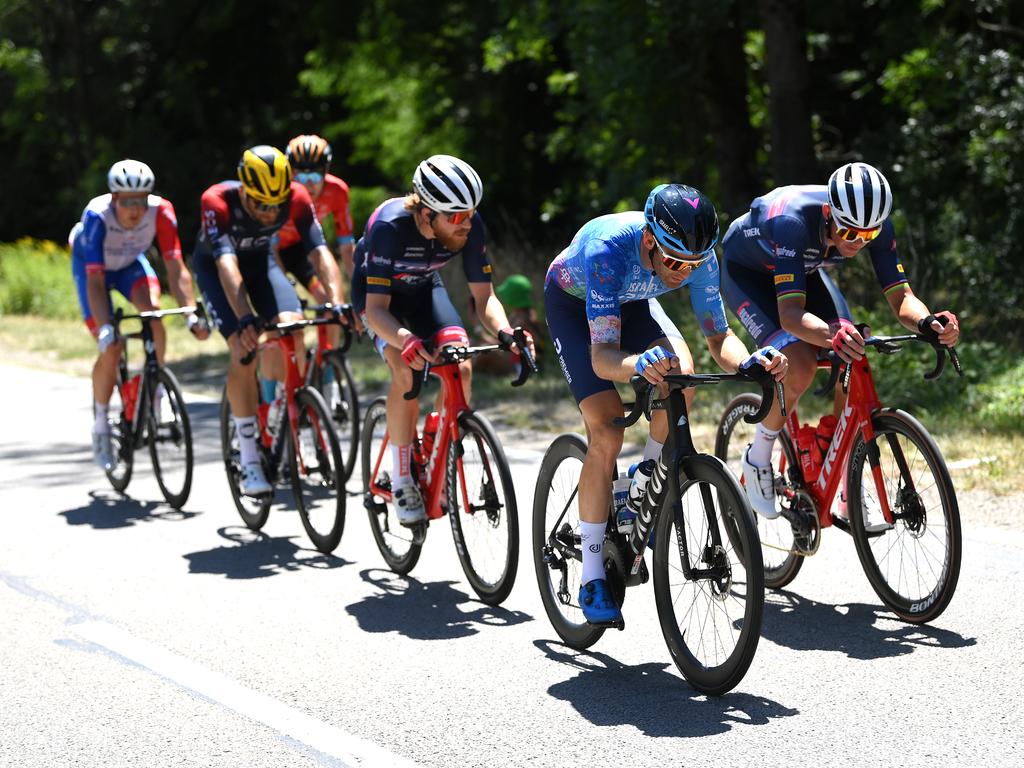 The cyclists sweat through 38C conditions as the Tour came out of the mountains. Picture: Alex Broadway/Getty Images

Not that everyone was happy about that. Teams with specialist sprinters regarded this as a stage that might give their man a chance. So far there have been only two bunch sprints and Caleb Ewan, Lotto-Soudal’s fast finisher, got two of his men to go to the front and rein in the seven escapees. The lead hovered at about two minutes, small enough to tempt the Lotto worker bees into going for it.

Around a left-hand turn with 71km remaining, one of the Lotto riders got his cornering wrong and, in the momentary panic, Ewan was brought down. It was a heavy fall in which he gashed a knee and grazed a shoulder. “Once I went down I didn’t feel so good any more,” Ewan said. He got back on his bike, but by then the rival Belgian team Quick-Step Alpha Vinyl had put their riders at the front to make it harder for the chasing Ewan.

Quick-Step have their own sprinter, Fabio Jakobsen, and for a while they were thinking about a bunch sprint. Jakobsen, though, suffered in the heat and soon his teammates pulled off the front to let others do the riding. Geraint Thomas then spoke with Jumbo-Visma’s race leader, Jonas Vingegaard, and said something to the effect that there was no need to chase a breakaway that posed little threat.

Thomas, of course, didn’t come down in the last shower. His team had Ganna in the break and they were backing the Italian to deliver the victory. Once the pace in the peloton slackened, the gap stretched from two to three minutes. At that point, the BikeExchange-Jayco team decided they would chase. This was the Australian version of closing the stable door after the horse has bolted. They soon realised they were wasting their energy. Pedersen, a former world champion on the road, was one of the favourites to win from the break. As well as being strong, he can sprint. It also helped the Dane that his teammate, the American Simmons, did a lot of the donkey work. Wright always contributes to the workload and he did his share again.

Pedersen feared having as many as five rivals through the streets of Saint-Étienne. With 12km remaining, he noticed Ganna reaching to take food from his jersey. That was all he needed. He accelerated, Küng tried to follow but couldn’t, Wright went past him and sped up to Pedersen. That was impressive. Houle joined to make it three at the front.

Wright and Houle had a dilemma. Work with Pedersen and he will almost certainly win in the sprint. Refuse to co-operate and you pass up an outside chance of winning and the certainty of second or third place. They threw in their lot with Pedersen. About 3km from the finish, Wright attacked but Pedersen swiftly countered.

The sprint went as expected. Pedersen powered clear, Wright went after him but at a distance. He finished an excellent second. All the general-classification favourites finished in the same group, 5min 45sec behind Pedersen. Thomas remains third overall, 2:26 behind Vingegaard, Adam Yates is fifth at 3:44 and Tom Pidcock eighth at 7.39. Three riders in the top eight for Ineos makes it a good Tour for them. Pedersen from a tightly fought lead group, not relinquishing his spot at the front in the last three kilometres. Picture: Alex Broadway/Getty Images

Pretty much every rider interviewed after the stage spoke of the intense heat and how much harder it had made the day. They talked constantly about the fatigue. So many are on their last legs. After the Alps they needed anything but three transition stages.

Somewhere a long time ago, though, the organisers realised that suffering sells. They probably came to this realisation on the road to Saint-Étienne or Mende or Rodez. They’ve been selling it ever since. Australia has dominated the track cycling with the arrival of a new superstar in Matt Richardson and our women blasting opposition away on a day of drama. The moment that decided the Tour de France

When other Tours have receded to dim corners, the 2022 race will be often spoken about. One scene will transcend the others – a moment that encapsulates everything that is beautiful and brutal about that sport, writes DAVID WALSH. 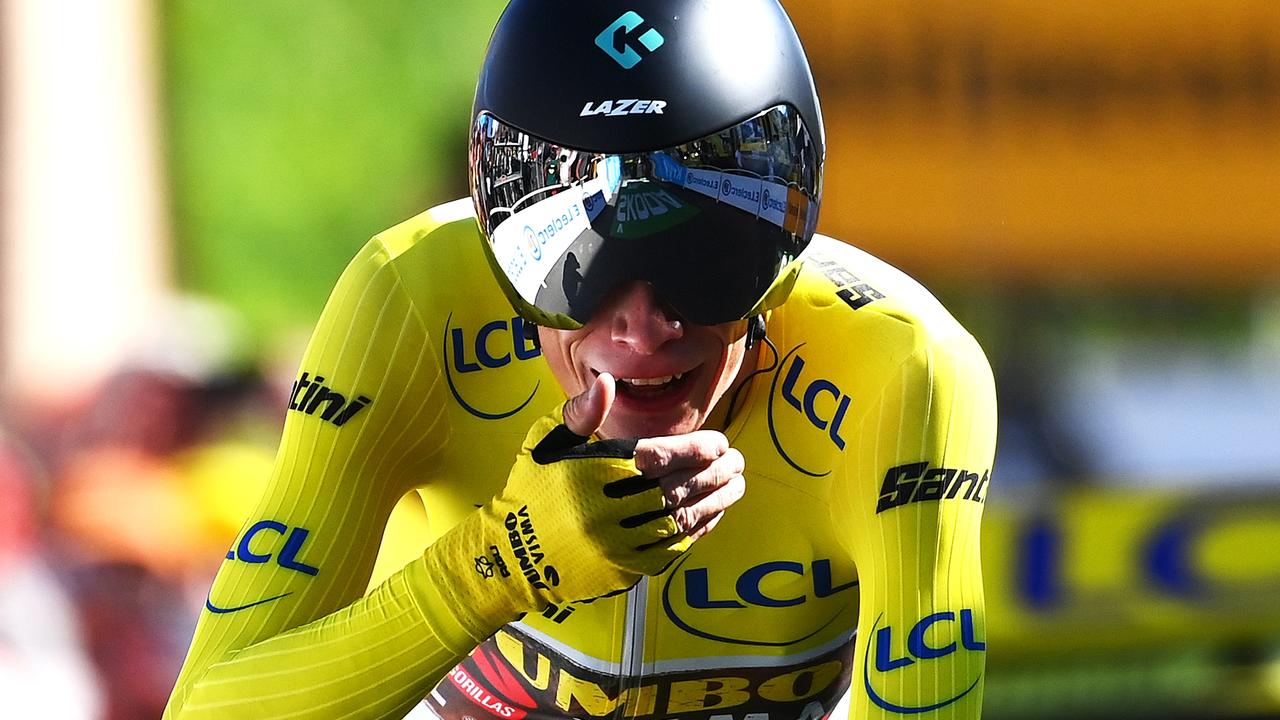 A rider no one wanted will win Tour de France

He shadowed Tadej Pogacar for 10 days then left him behind on stage 11. Now Jonas Vingegaard, three years ago a fish factory worker, has sealed an incredible triumph in the Tour de France. The world’s most famous bike race was first held in 1903 but only now, thanks to the efforts of Louise Vardeman and others, do women get to take part in their own version. 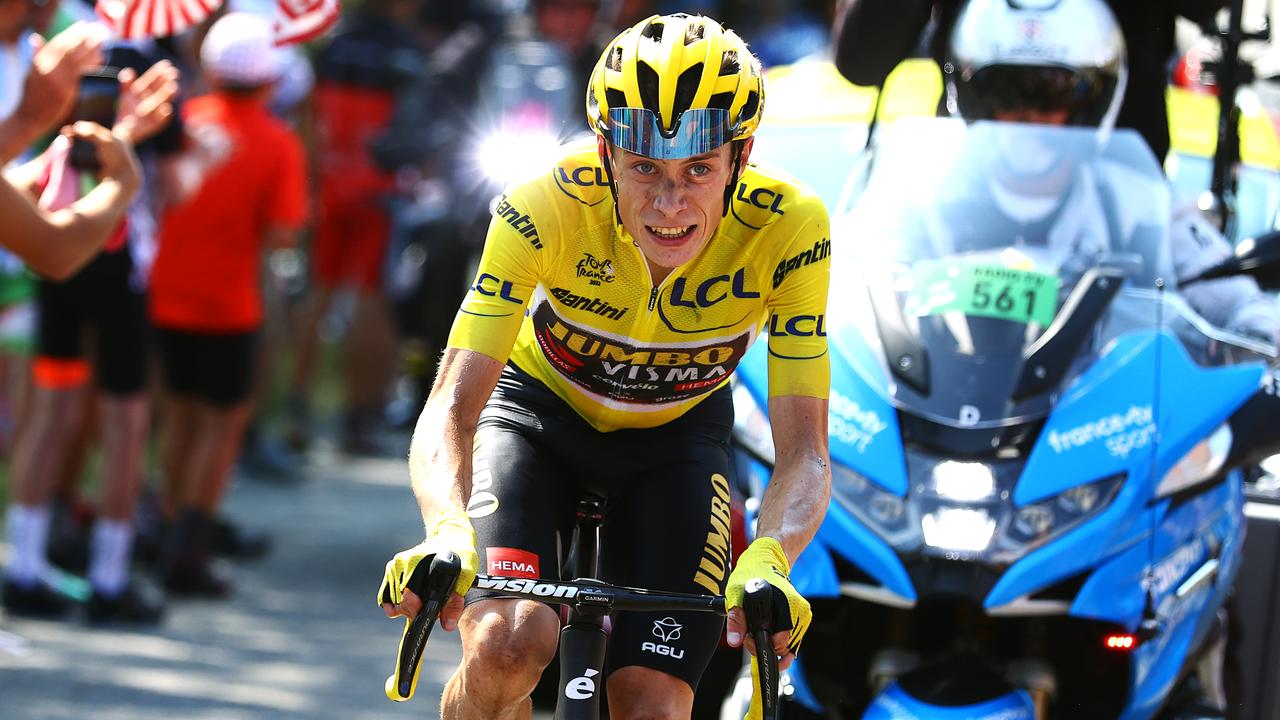 At last Tadej Pogacar had no more to give, writes DAVID WALSH. The Yellow Jersey that he won at the past two Tours started to move away from him, shrinking until he could barely see it. Then it was gone. Tour de France gets its own ‘Drive to Survive’

The producers of the hit Formula One show sent a crew of 60 to turn their cameras on the world’s most famous bike race.