Luke Brattan’s first appearance in Sydney FC’s new campaign is also likely to be his last after he suffered a serious knee injury. 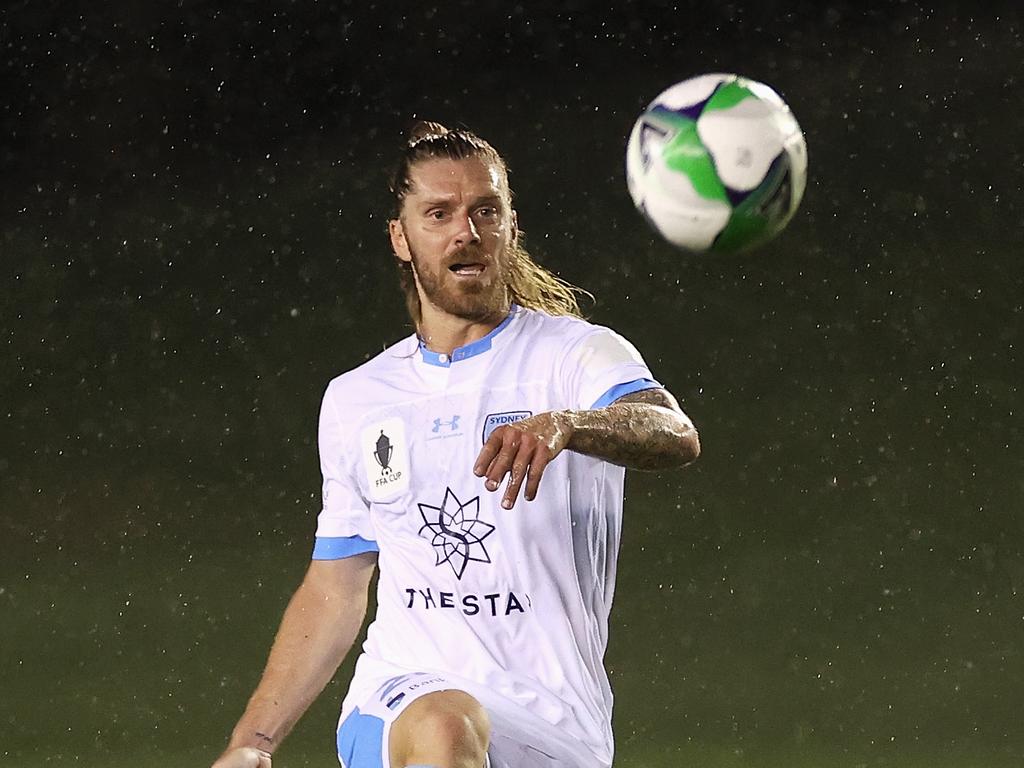 Luke Brattan is set to miss the rest of the season for Sydney FC after suffering a serious knee injury in their FFA Cup clash against Sydney Olympic. Picture: Cameron Spencer/Getty Images

Sydney FC star Luke Brattan is set to be sidelined for the 2021-22 A-League season after suffering a knee injury in the Sky Blues’ 4-2 FFA Cup win over Sydney Olympic.

Brattan was forced off the field in the dying stages of the first half at Belmore Sports Ground on Wednesday night, with his coach Steve Corica fearing the key midfielder had torn his anterior cruciate ligament.

Corica said 31-year-old Brattan would have scans on Thursday to determine how serious the injury was.

“Obviously, it’s not very good if that’s the case and if he has that injury he’s out for the whole season.

“We’ll wait to see and fingers crossed it’s not that bad, but if it is, it’s very disappointing for him and the club.”

Brattan missed last weekend’s opening round of the A-League season through suspension after being sent off in Sydney FC’s 3-1 grand final loss to Melbourne City last season.

Adam Le Fondre, Patrick Wood, Elvis Kamsoba and Trent Buhagiar all scored for the A-League heavyweights, who suffered an early scare when NPL NSW club Olympic went ahead 1-0 through an Adam Parkhouse goal.

“I thought Sydney Olympic did really well in the first half. They put us under pressure and created chances and the goal got their confidence up,” Corica said.

The Sky Blues recovered to lead 3-1 before an Olympic goal in the 82nd minute through Ben van Meurs ensured a tight finish. Patrick Wood was among the goalscorers for Sydney FC against Olympic on Wednesday. Picture: Cameron Spencer/Getty Images

“In the end it was comfortable, but they fought all the way until the end and when they got their second goal, it shocked us a little bit, Corica said.

“Three games in one week in the first week of the A-League season is always going to be difficult.

“We’ve got a few players injured and another one tonight with Brattan going down, so the squad is going to be tested.”

In Wednesday night’s FFA Cup playoff match in Adelaide, Melbourne Victory beat Perth Glory 4-3 in a penalty shootout after scores were locked at 1-1 at the end of normal time and extra time. Former EPL defender and Jamaican international Adrian Mariappa has joined the A League Mens after signing with Macarthur FC Bulls. Ferraris but no physio: Inside Palmer United

He came (in either a helicopter or a rare Ferrari), he saw, he left the dream in tatters. Players have recounted the incredible stories of Clive Palmer’s time as the owner of Gold Coast United. Macarthur FC has been issued a show cause notice by the A-Leagues following the Campbelltown Stadium pitch debacle. Bulls chairman Gino Marra has blasted council for letting down the community. Josh Cavallo will create history this weekend when he lines up for Adelaide United. KELLI UNDERWOOD discusses why gay male athletes largely still opt for silence.