Sam Kerr’s shoulder charge on a pitch invader went viral but the lasting impact could go much further and change football forever.

Sam Kerr’s shoulder charge on a pitch invader last week was felt around the world but the impact could be much deeper if a group of British parliamentarians have their way.

The Matildas captain and Chelsea star gave Australia one of the sporting moments of the year when she impersonated Andrew Symonds and demolished an unwanted visitor.

During a Champions League match between Chelsea and Juventus, the fan was having the time of his life trying to take a selfie with Blues skipper Magdalena Eriksson. However, no one else saw the funny side and Kerr took matters into her own hands, blindsiding the man with a brilliantly executed shoulder charge.

Incredibly, Kerr was give a yellow card for rough conduct by the referee.

It was a decision that looked so much worse when the pitch invader escaped scot-free, thanks to a loophole in the 1991 Football (Offences) Act. He didn’t get off completely scot-free though. Photo by Warren Little/Getty Images Under the law, it is an arrestable offence if a fan goes on to the playing area and a fine of up to 1000 pounds ($1850) can be handed out. However, women’s football is largely excluded from “designated matches”, which include Premier League, FA Cup and any games involving full or associate members of the UK’s Football League but not women’s matches.

That loophole may be slammed shut as a group of eight MPs have taken the issue into parliament, releasing a letter saying they were “shocked to learn that Women's football is not included”.

Members of the women's parliamentary football team and women's football group have written to the Sports Minister calling for the closure of the loophole that excludes women's football as designated matches, as highlighted by @charlotteharpurpic.twitter.com/9V3lHSM4sv

Earlier this week when the loophole was exposed, MP Tracey Crouch, a former Sports Minster herself tweeted: “This is extraordinary! I didn’t know this but now that I do I shall look to see how it can be changed. I also think Kerr’s yellow card should be rescinded – ridiculous she gets punished when the invader does not!”

Although not one of the signatories on the letter, Julie Elliott, who is a member of the UK Digital, Culture, Media and Sport Select Committee, said something needed to change.

“It is shocking that elite sportswomen playing football in this country are not afforded suitable protection like the men are,” she told The Telegraph.

“I do hope the Government look into changing the law quickly, to ensure that women playing the game are kept safe and protected.

“Women’s football is growing and growing, and with attendances going up, this situation becomes more and more important to solve as time goes on. It is an issue I will be following closely, and I do hope that changes can be made sooner rather than later.” 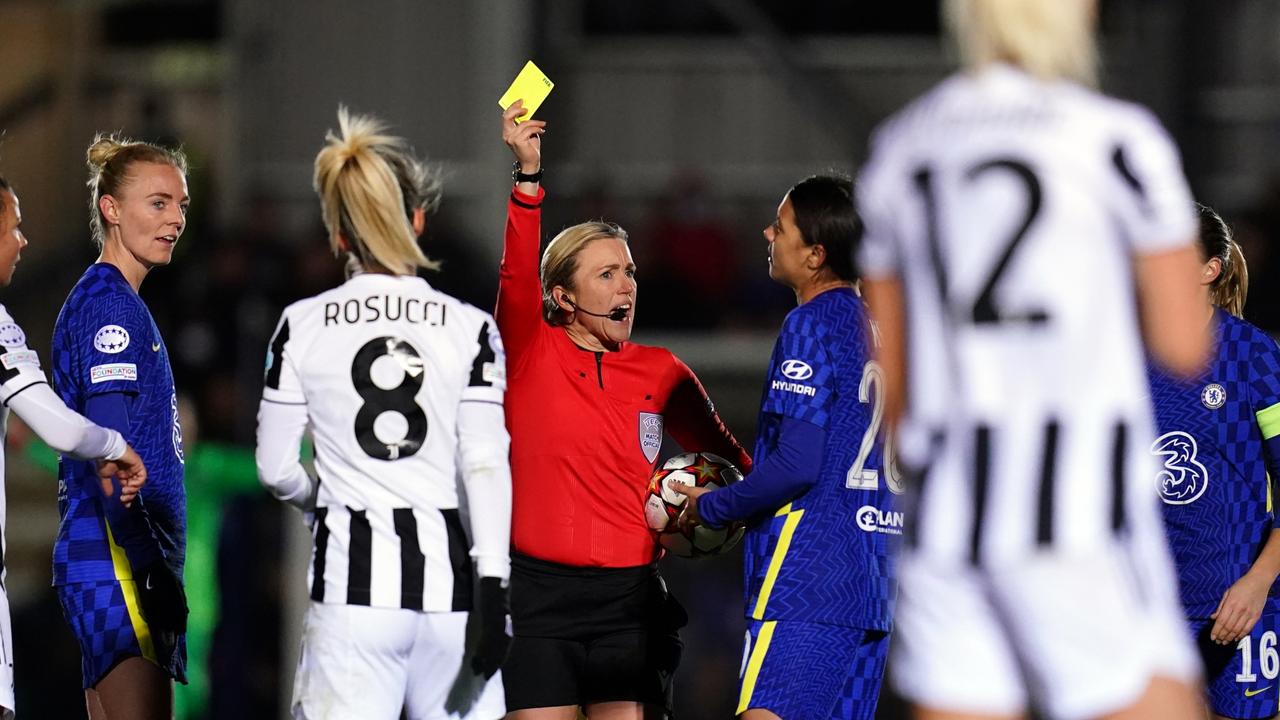 No way Kerr should have got a yellow card. Photo by John Walton/PA Images via Getty Images

“Matches are designated based on the history of incidents and the assessment of risk. Where matches are not designated, they are subject to generic public order legislation that applies to them as well as other sporting events.”

The Telegraphalso reported the match should have been a “designated match” because it featured one of the teams involved “whose home ground is for the time being situated outside England and Wales”.

Kerr’s coach Emma Hayes raised her concerns about the safety of her players after the match.

“We do have to think about player safety,” Hayes said. “We’ve seen in the growth of the game there is this sense of the players being more in demand. It should serve as a reminder to us all in our stadiums and with our stewards we’ve got to put player protection first.”