The Royal and Ancient Golf Club has willingly bent its own rules to permit former champions to play one last tournament, but have denied Greg Norman the privilege and the Shark is not happy.

Greg Norman has written to the Royal and Ancient Golf Club asking for clarification about whether he can play this year’s British Open after one of his former rivals boasted that he got a special invite and a footnote saying how past champions are cared for.

As exclusively revealed by The Daily Telegraph, Norman wants to come out of retirement to take part in the 150th British Open, at St. Andrews in July, but needs an exemption after his original farewell to the home of golf was postponed because of a gruesome chainsaw accident.

As a two-time champion – Norman won the coveted Claret Jug in 1986 and again in 1993 – so was entitled to automatic entry up until the age of 60, when former winners normally make their swansong appearance. But the Great White Shark never got to celebrate his formal British Open farewell the year he turned 60, at St. Andrews in 2015, because he was badly injured the year before and was still recovering from surgery.

Norman now hopes he can make his belated farewell this year but he’s 67, which would rule him out if the regulations are strictly enforced.

However, the tournament’s organisers have been known to fudge their own rules and let older former champions play after passing 60, including Jack Nicklaus and Tom Watson, who both teed off after turning 65.

And officials have even bent the rules again this year with American Mark Calcavecchia, who coincidentally beat Norman in a playoff for the 1989 British Open title, revealing on social media how he had been given permission to make his farewell appearance in July even though he will be 62. “My last Open (at age 60) was supposed to be two years ago at Royal St. George’s, and it was cancelled because of Covid. Last year, I couldn’t play because I’d had back surgery,” he explained.

“So I wrote a long letter in April when I knew I wouldn’t be able to play and I asked the Open committee to consider letting me play at St. Andrews, make it my last Open.

“They got right back to me and said, ‘Let me bring it up to the championship committee.’ And not even a few weeks later, I got an email back.

“The decision by the 25 committee members was unanimous. ‘We’d love to have you play your last Open at St Andrews. We love to take care of our past champions.’

Unsurprisingly, organisers have now been accused of double standards and News Corp can confirm that the Shark has written to tournament organisers asking for an explanation on whether he can play before next month’s deadline for entries.

Some of Australia’s top players are among dozens of professionals who have joined Phil Mickelson in registering with Greg Norman’s rebel international golf league that has divided the sport.

For confidentiality reasons, their identities remain strictly under wraps, but News Corp can confirm Aussie players have already put pen to paper.

Multiple sources have confirmed to News Corp that the as yet unnamed Australians are among more than 70 top professionals who have signed on to play in the controversial Saudi Arabia-backed Super Golf League, that has been labelled ‘sportswashing’. 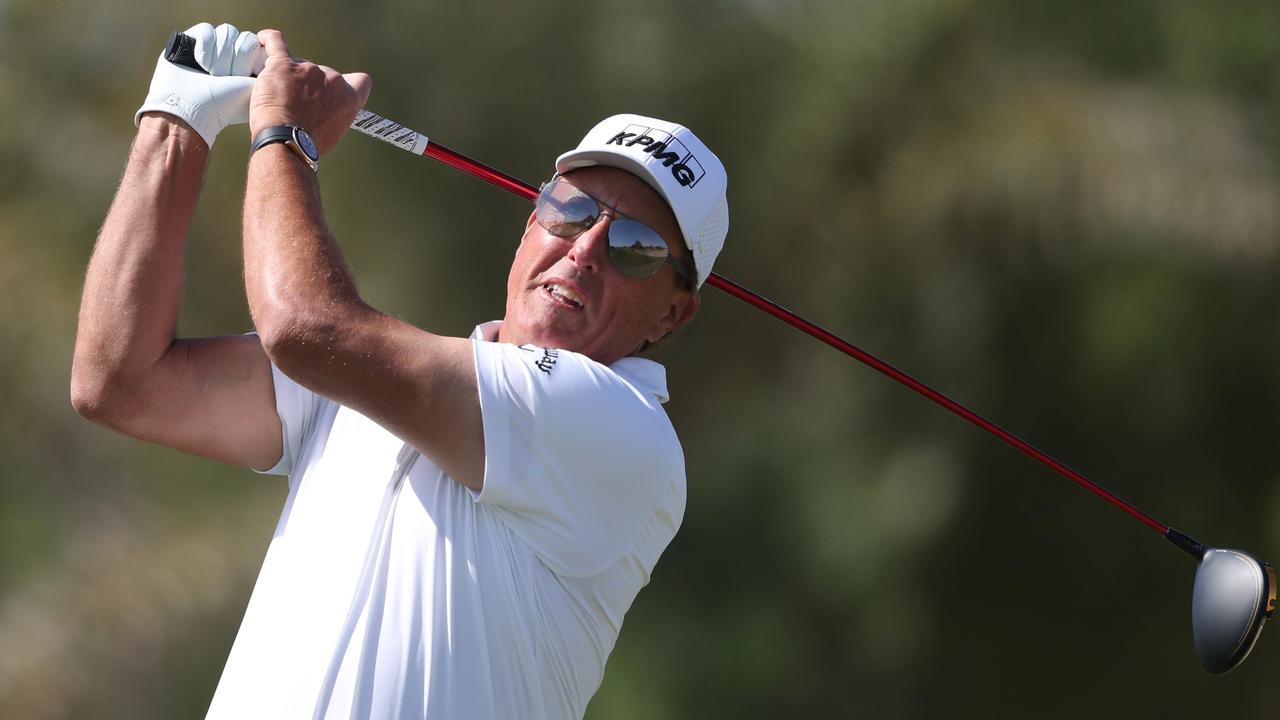 Phil Mickelson is the biggest name to go public about possibly playing in the rebel series.

While Mickelson is the highest-profile player to go public about his intentions to sign up, insiders told News Corp the list features 15 of the world’s top 100 players, including three major winners.

In addition to Mickelson, who has won six majors including last year’s PGA Championship, leaked reports out of the UK say former Masters winner Sergio Garcia and British Open champion Louis Oosthuizen are preparing to play in the rebel league’s inaugural tournament, taking place in England in June.

It has also been reported that Lee Westwood, Ian Poulter and Robert Garrigus intend to play but there are many more whose names have been kept secret but who have been tempted by the massive sums on offer from the invitational series, owned by LIV Golf and being run by Norman as the chief executive officer.

The floodgates could be about to burst after Mickelson’s management company Sportfive confirmed on Tuesday that the 51-year-old American has formally asked the PGA Tour for a release, even though he was still uncertain whether he will tee off in the opening event at the Centurion Club outside of London.

“Our client Phil Mickelson is officially registered to play in the PGA Championship as well as the US Open,” Sportfive’s Steve Loy said.

“We have also filed a request on his behalf for a release to play in the first LIV Golf Invitational in London, June 9-11. This request complies with the deadline of April 25 set forth by the PGA Tour to compete in a conflicting tour event.

“Phil currently has no concrete plans on when and where he will play. Mickelson and Greg Norman, chief executive of Liv Golf Investments, during a practice round before the PIF Saudi International in February this year.

“Any actions taken are in no way a reflection of a final decision made, but rather to keep all options open.”

Set up as a new-look team event to rival the established PGA Tour, the proposed Super League Golf League is scheduled to kick off this year with eight tournaments, each offering eye-watering prizemoney.

Backed by the Saudi sovereign wealth fund, the final event alone will be worth an unprecedented $70 million, more than golf’s current four majors combined, including $22 million for the winning team.

Norman has confirmed that the iconic Blue Monster course at Doral in south Florida, owned by former US President Donald Trump, has been selected to host the season-ending championship. England’s Lee Westwood has been linked to the breakaway series.

“There could not be a more perfect location to host our biggest event of the year at a course with such a long history with professional golfers,” Norman said. “We are excited to add another piece of history to this famed destination.”

The proposed rebel league has split the golfing world with critics, saying it’s a form of sportswashing, where brutal regimes throw money at international sports to distract from their alleged human rights abuses.

Australia has been identified by human rights groups as one of the biggest beneficiaries of the practice, with Australian sports accused of turning a blind eye when it suits them by sticking out their hands when there’s free cash on offer.

Phil Mickelson applies for release to play in rebel tour

Phil Mickelson sparked intrigue about his possible return to golf on Monday after applying for a release to play in the first event of a lucrative Saudi Arabia-backed golf tour in June.

Mickelson’s management company confirmed in a statement that the 51-year-old six-time major winner was seeking approval to play in the June 9-11 LIV Golf Invitational outside London — but stressed he had not yet confirmed his participation.

The former world number one has not played since triggering uproar in February following publication of his remarks made last year to author Alan Shipnuck concerning the new Saudi-funded venture.

Mickelson described the Saudi financial backers of the proposed league as “scary” with a “horrible record on human rights” but said he was willing to deal with them in order to gain leverage to “reshape” the US PGA Tour.

Mickelson, the reigning PGA champion, subsequently apologised for the comments and announced he was taking some “desperately needed time away” from golf. Phil Mickleson tees off in a tournament in Al Murooj, Saudi Arabia.

However his eventual return could conceivably feature participation at the LIV Golf event at Centurion Golf Club outside London.

Steve Loy, co-president of Sportfive management, said in a statement Mickelson was registered to play in both next month’s PGA Championship, where he will be defending his title, as well as the June 16-19 US Open, which takes place the week after the LIV London event.

“Our client Phil Mickelson is officially registered to play in the PGA Championship as well as the US Open,” Loy said.

“We have also filed a request on his behalf for a release to play in the first LIV Golf Invitational in London, June 9-11. This request complies with the deadline of April 25 set forth by the PGA Tour to compete in a conflicting tour event.

“Phil currently has no concrete plans on when and where he will play. Any actions taken are in no way a reflection of a final decision made, but rather to keep all options open.” 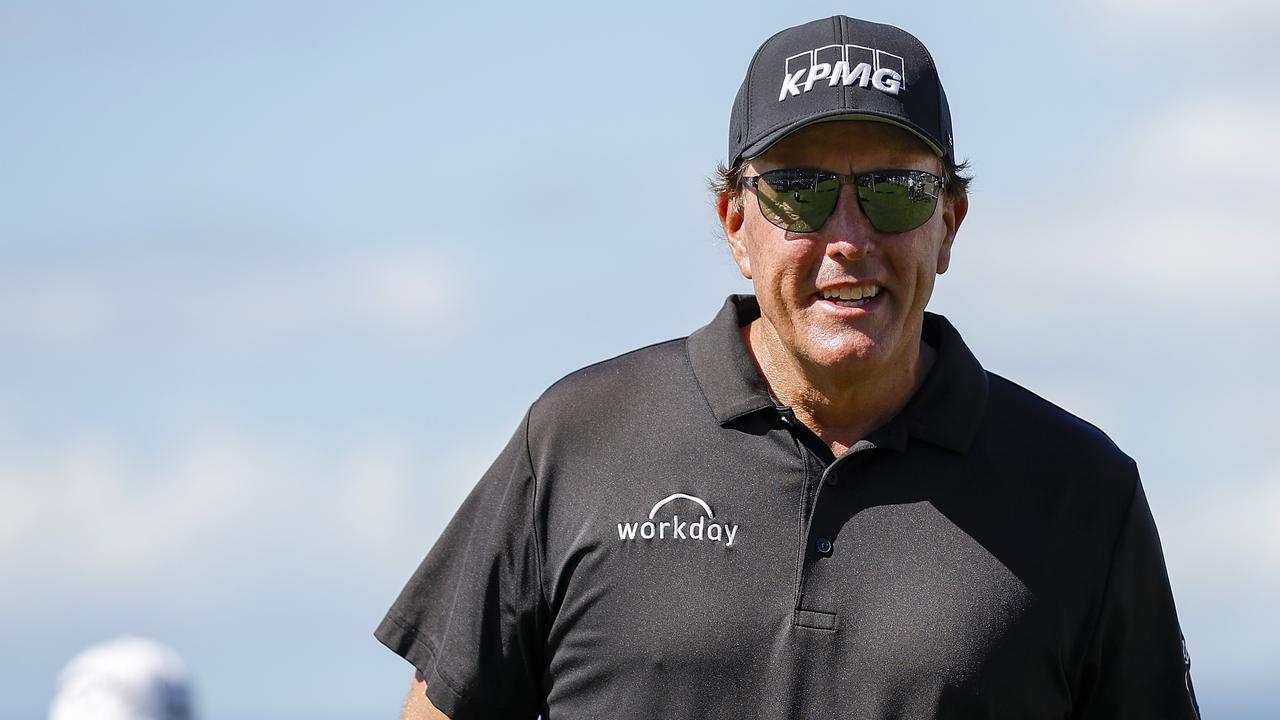 Phil Mickleson’s management say he’s registered to play in the PGA Championship and US Open.

Mickelson’s possible return comes amid intense speculation about other players who may opt to take part in the Saudi-backed venture.

The money-spinning series will offer purses of $25 million per tournament — making every leg of the series more lucrative than the richest event on the PGA Tour, and roughly more than double the prize money on offer for each of golf’s four majors.