The Masters: It wasn’t perfect but it looked like the Tiger Woods of old

Tigers Woods showed few signs of rustiness on his way to a solid opening round featuring three birdies. Tiger Woods didn’t limp his way through his comeback. Neither did he float magically back to the top of the leaderboard. He didn’t drive particularly straight and his touch with his chipping stroke hasn’t yet come back to join him.

However, he did look very much a mirror image of the Tiger Woods of old because if you were ever so foolish as to consider that he might not be up to this task, his fighting spirit was absolutely as belligerently determined as ever. He may or may not win here this week, as he told us he might, but the manner in which he posted his one-under, first-round finish was a victory in itself.

There has been many a famous Tiger Sunday here, but never a Tiger Thursday like this. Even he, an athlete so loath to compliment his own performance, described it as a victory. Why? “If you’d seen how my leg looked,” he said. “People have no idea how hard it’s been.”

A hero's welcome at Amen Corner for @TigerWoods ðŸ‘ pic.twitter.com/X4R18EFYC4

What does it look like when you haven’t played tournament golf in 17 months and nearly lost a limb in the hiatus? Well, it’s a circus, isn’t it? It is pure pandemonium.

Yet can you really come in and win the Masters, as he so calmly informed us he could? The answer remains “maybe” when Thursday might have finished on “maybe not”. When he signed for a round of 71, there were other players three shots ahead of him, but he is tucked in nicely behind the leaders with three laps to run; the perfect position.

On day one of the comeback, his target was not the rarefied air at the top of the leaderboard anyway, it was just to keep the leaders in sight. It was not to stumble. And here, whenever you thought he might lose his footing, he saved himself. His rescue game was outstanding. What will never fade from his muscle memory is the ability just to hang in there.

Physically, only Woods knows how those 18 holes felt. “I am as sore as I expected to feel” was how he put it. On the course, though, he kept largely hidden the toll that last year’s car crash had taken. His walk is stiffer, we knew that. On the practice ground before the round, he adjusted the leg strapping beneath his trousers. He stoops uncomfortably when reading putts. Yet never in the course of these 18 holes did his demeanour suggest that his right leg was holding him back. “I was telling the team all week,” he said, “come game time, it’ll be a different deal, my adrenaline will kick in, I’ll get into my own little world and I’ll get after it.” 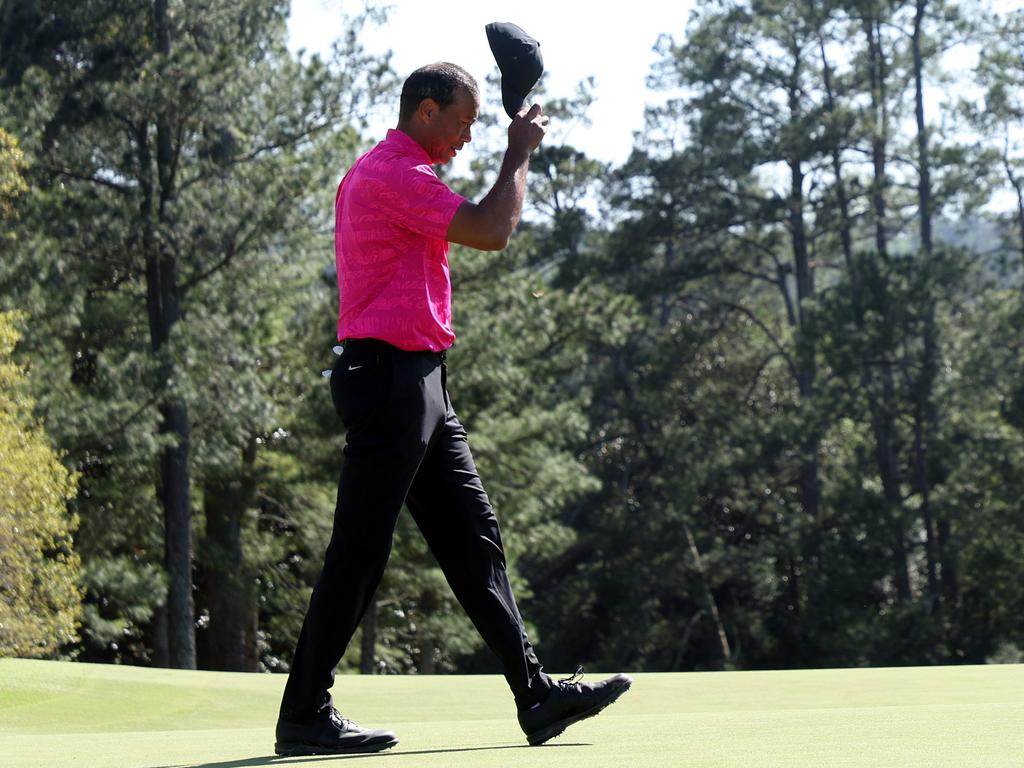 Woods had a few issues with the driver but his putting more than made up for it. Picture: Jamie Squire/Getty Images

He could not have been truer to his word because just when it seemed that he was running out of steam, he unveiled something familiar. On the 14th his drive went loose and left and he finished with a bogey. Then on the par-five 15th, rather than go for the green in two, he laid up and finished left in the trees again.

Done and dusted? What happened, then, on the 16th — a hole where he has a certain amount of history — would be the fuel that would take him to the end of the round. His drive finished short and right of the pin. His putt, however, was a thing of beauty and rolled all the way in. Oh the roars.

Putting kept Woods in the game. His driving began right and then started ducking left. His short chips from the fringes were the shots where those long months away from the game were most exposed. Yet every time he slipped back, he found a way of stepping forward again.

Never was there any sense of certainty, which only added to the hysteria which has been plain silly all week — and that was just on the practice days. Naturally, the dial was turned up even higher for the first round when there was a messianic air around Woods, with armies of humanity flocking to see him, from the practice range to the 1st tee, then up the fairways and beyond. Just to get a glimpse.

A @TigerWoods fist pump on 16 ðŸ…

The birdie moves Tiger back into red numbers. pic.twitter.com/qb6AvOXvVg

Awaiting him on the tee was the hubbub of anticipation. Through the crowded galleries, barely anyone could really get so much as a fleeting glance of him. No matter.

“I hear him,” said one patron as the din travelled over from the nearby practice green. “Here we go,” said another. “Some exciting shit’s going on round here.” And so it was.

First shot. How much store can you set against his initial competitive golf shot in 17 months? That drive strayed right, short of the sand trap, but sufficiently off target to give him a tricky approach. Already he was scrambling.

And could he scramble like the Tiger of yore? That was the first flicker of old. He may have nearly lost a leg, but he hasn’t lost his personality. Show some grit. Dig in. Don’t let it beat you. He punched a low chip across the green for his third, stood over an eight-foot par-putt and holed it. Up and running. 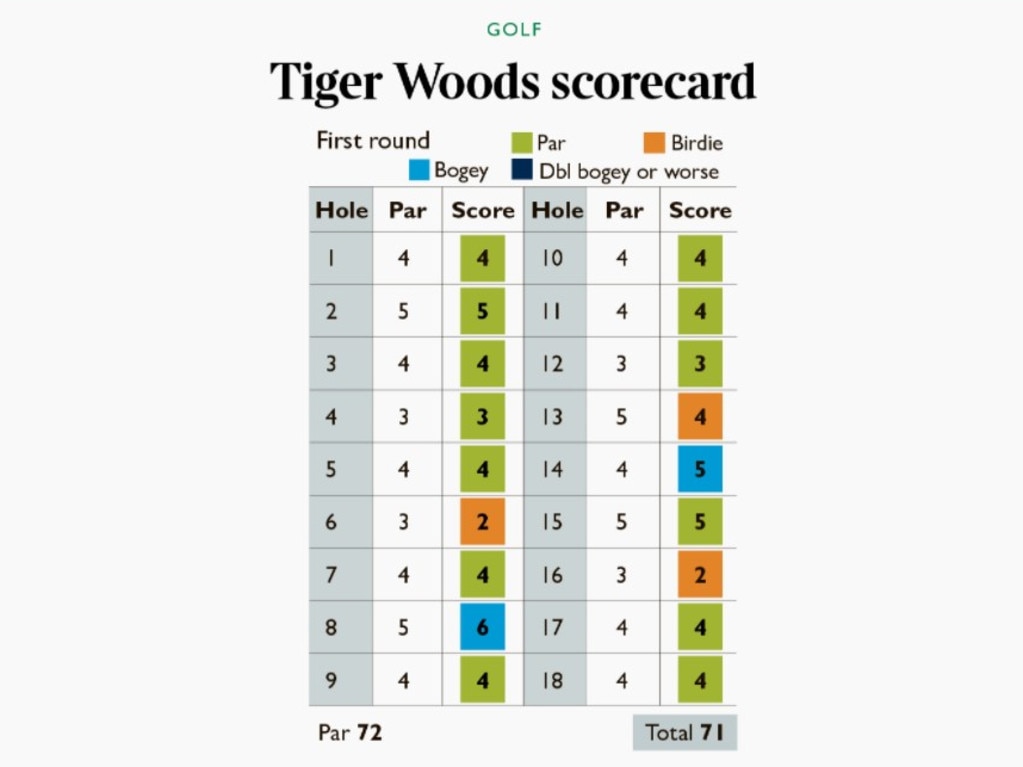 For two holes only did it seem that his discipline and concentration slipped. His worst shot of the day was his third on the par-five 8th, a 50-yard chip that he left short. That ended in bogey. He then slapped his drive on the 9th way left and had to launch another of those rescue missions.

Indeed, he had to make saves on the 7th, 9th, 10th and 15th. His most thrilling rescue acts were those from behind trees and out of the pine needles on the 9th and 14th. And ever the showman, he saved another for the 18th.

Maybe it is too much to suggest that what he showed is that he has rescued his future as a competitive golfer. Yet at the start, one question was whether Woods would make the cut. That is not the issue now. It is like he said: whether or not he is back to win. 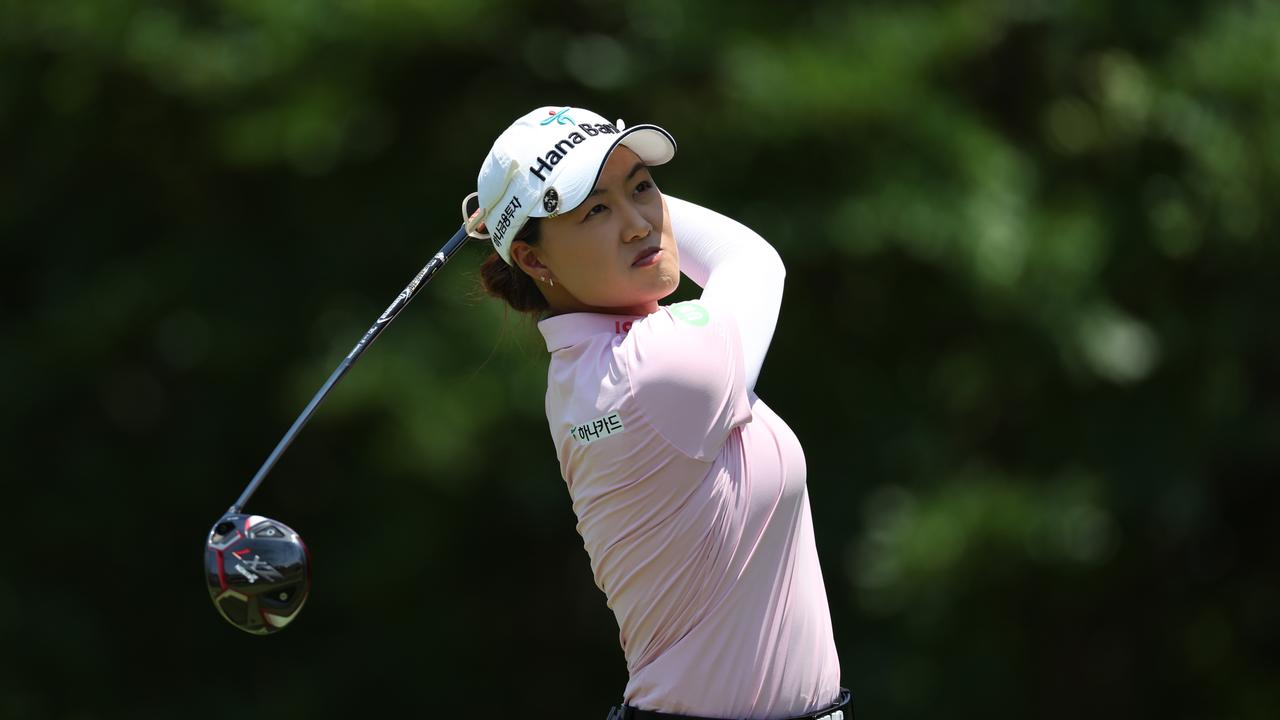