The V8 title fight is on after Chaz Mostert and Cameron Waters combined to deliver Holden hero Shane van Gisbergen a double blow in Darwin.

Keeping the championship alive by outmuscling van Gisbergen during a fender bending Sunday at the Darwin Triple crown, Mostert and Waters both powered their way into championship contention by winning a race each.

With Ford star Waters striking first to win the earlier race, Mostert held on to beat Anton De Pasquale in a final race thriller that ended up breathing life into the championship after van Gisbergen had a shocker.

In a drive that Mark Skaife declared as his greatest, Walkinshaw pilot Mostert survived on old tyres to hold out De Pasquale.

“Everyone had fresher tyres than me,” Mostert said. “But it was a super effort by the team. I came out super aggressive and I just held on.”

De Pasquale was able to narrow the gap to Shane van Gisbergen to 213 by finishing second after the Red Bull driver had a horror final race.

On track for another podium after fighting his way through the field, van Gisbergen came together with Will Davison in an incident that ruined his race.

The reigning champion ended up finishing in 21st place after also copping a 15 second penalty for the contact.

Despite once again making a mistake in a pressure moment when fighting for the lead, De Pasquale emerged as a serious contender by backing up his race one win with a podium.

“I just couldn’t get past him,” de Pasquale said.

“But all in all it was a good weekend for the team.”

Waters also became a contender when he won the first race of the day.

In a race that was suspended after James Courtney skittled a bevy of cars during a lap one crash, Waters continued the Ford fightback by landing another blow on van Gisbergen.

Starting from pole position, the Tickford driver saw off a start line challenge from Dave Reynolds and Will Davison before the crash stopped the race. The beginning of race two at the Darwin Triple Crown was marred by a huge crash.

With four cars stranded in pitlane following the crash, Waters resumed the race at the head of the queue and held Davison at bay to keep his championship bid alive.

“It means a lot,” Waters said.

“It is awesome to be able to bounce back with a pole and win. Wilbur had something in the tank at the end but I had to manage it and I had enough to get the job done.”

Courtney emerged unhurt from the crash that forced the race to be red-flagged. The collision sent cars in all directions.

In a heart-stopping moment for former champion Courtney, the Ford driver speared across the inner track and skittled a number of rivals including Pye.

“I was on the inside and then coming out of the turn someone in front checked up and had a bit of a wobble,” Courtney said.

“I got out of the gas because I was in the back of them and then someone got in the left-rear quarter. I Just spun us off to the left and was a passenger from there.

“I don’t really know who I backed into at that point but it was pretty crazy going across. I was just hoping that I was going to stop before everyone else.

“Unfortunately we ended up going all the way through.” Ford are back in the V8 title fight after Anton De Pasquale finally landed a blow on Shane van Gisbergen by delivering the Holden hero a beating.

In a bash and barge beginning to the Darwin Triple Crown that saw crashes and carnage, De Pasquale held off both Will Davison and van Gisbergen to emerge as a genuine championship contender.

Finally breaking through for his first win of the season, De Pasquale showed both he and Dick Johnson Racing (DJR) have the speed and race craft to take the championship fight to van Gisbergen.

“It is an awesome day for the team,” De Pasquale said. 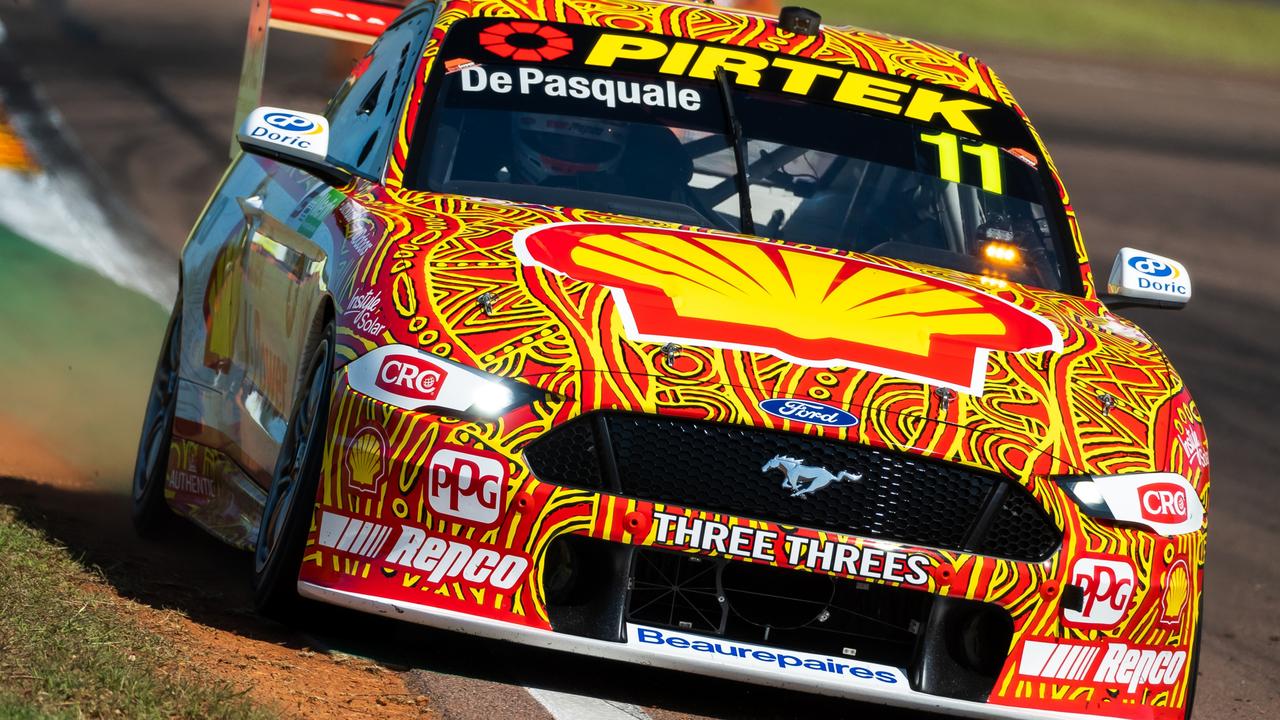 Anton de Pasquale gets everything out of his Shell V-Power Racing Ford Mustang at Hidden Valley. Picture: Daniel Kalisz/Getty Images

“And an awesome race. It feels awesome to get the win because we have been close a couple of times this year. We know we have the team and the package to do it, so it was not a surprise. We have been working hard and it is nice for everyone in the team to finally get it.”

Setting up his race win by barging his way past teammate Davison on the opening lap, De Pasquale was forced to drive the wheels off his car following a late assault by van Gisbergen.

The Red Bull star looked set to fight De Pasquale for the win until he was held up by Davison in a thrilling finish.

“Shane was coming hard at the end on the fresher tyres so he made us work for it,” De Pasquale.

“I had to pick up the pace but it ended up all good.”

It was a red-letter day for DJR with Davison finishing second to make it a one-two for the famous team.

Davison helped De Pasquale get the win by first holding off van Gisbergen and then forcing him into making a mistake.

“It is an amazing bounce back from the team to get the one-two,” Davison said.

“Shane was coming and I just had to hold him. I didn’t know if I could but I was going to give Anton a bit of a buffer if I couldn’t. I didn’t make it easy for him and fortunately I had enough to hang on.” 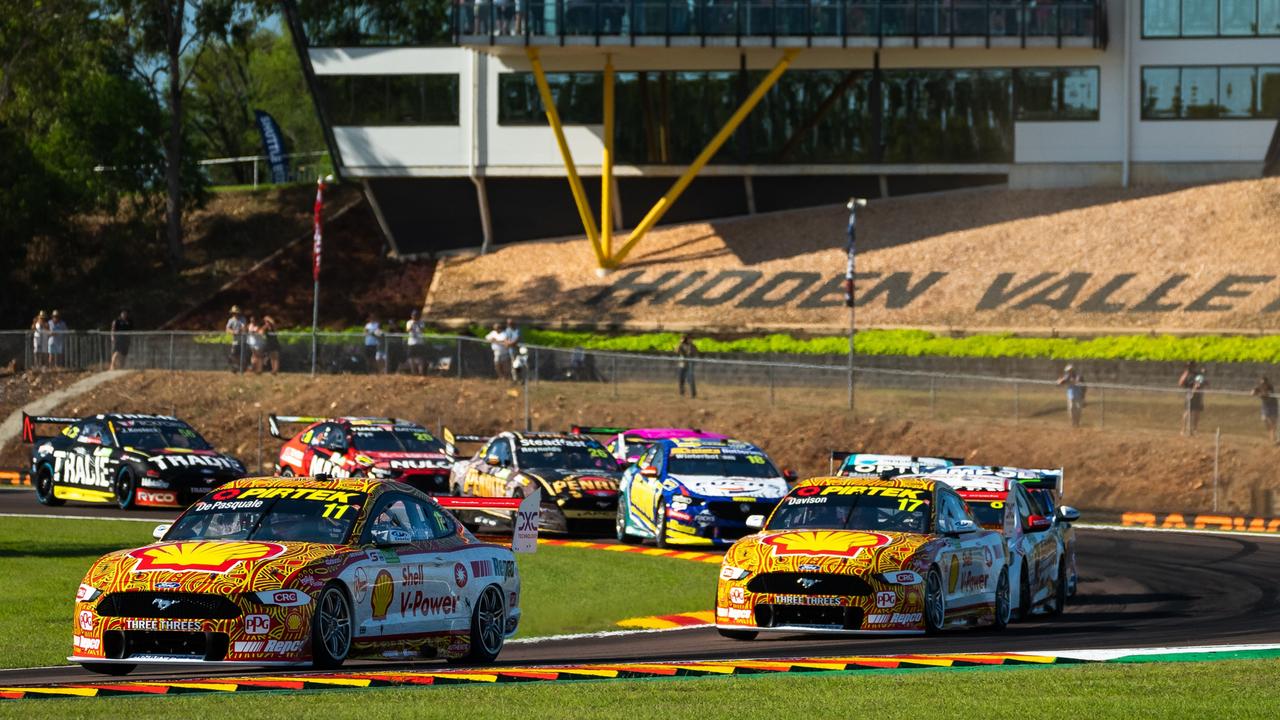 In a stunning one lap blast that came on the eve of his 500th race start, the Ford veteran began his milestone weekend by blasting a fastest ever 1.04.95 to beat Shane van Gisbergen in a thriller.

“We made a couple little changes and the car was great.”

“I’m putting a lot of pressure on myself today, it’s a very special day.

“I don’t get caught up in milestones, but the team did such a nice thing for me this morning.

While Davison was inch perfect as he trumped his teammate Anton De Pasquale, van Gisbergen was unhappy after failing to match the top time.

“It was a shit lap,” van Gisbergen said.

Van Gisbergen did his best to make up for his qualifying lap by charging his way into contention with another five-star drive and another podium.

“The other guys did a great job at the start,” van Gisbergen said.

“We clawed our way back but Will defended well and congrats to them. Our car was fast enough so if we get it together we will be fine.” Will Davison has broken the Hidden Valley lap record to win a scorching top-ten shootout in Darwin ahead of Shane van Giberhgen who had a “shit-lap”.

In a stunning one lap blast that comes on the eve of his 500th race start, the Ford veteran began his milestone weekend by blasting a fastest ever 1.04.95 to beat Shane van Gisbergen in a thriller.

“We made a couple little changes and the car was great.” Will Davisoncelebrates after taking pole position for race 1 of the Darwin Triple Crown round at Hidden Valley Raceway. Picture: Getty Images.

While Davison. was inch perfect as he trumped his teammate Anton De Pasquale, van Gisbergen was unhappy after failing to match the top time.

“It was a shit lap,” van Gisbergen said.

Will Davison’s glittering career at Dick Johnson Racing (DJR) could continue with the Ford veteran about to “sit down” with the powerhouse team to begin negotiating a new deal.

As Davison gets set to strap down for his 500th race this weekend, News Corp Australia can reveal the two-time Bathurst winner is likely to keep his prized seat at DJR despite reports the team is gunning for a younger driver.

Speaking on the eve of the very first Supercars Indigenous Round, which will begin at Hidden Valley Raceway in Darwin on Friday, Dick Johnson revealed that Davison was odds on to retain his seat. Every Supercars vehicle with their Indigenous design ahead of the Darwin triple crown. Photo: Mark Horsborough.

“We haven’t gotten together with him yet but we will sit down to discuss it all soon,” Johnson said.

“At this point in time he is doing a bloody good job and we all just have to sit down to work it all out.”

Reportedly in the hunt for a next generation driver with Erebus rookie Will Brown linked to the team, Johnson suggested Davison was still at the head of the queue and likely to be offered a new deal.

“To be honest there isn’t an awful lot around (on the market),” Johnson said.

“Will is doing a good job.”

Davison could go a long way to sealing a new deal this weekend by breaking through to win his first race at Hidden Valley.

Set to celebrate his 500th race start, Davison could make it a double celebration by trumping the likes of Shane van Gisbergen and Cameron Waters in the battle for the Darwin Triple Crown.

“I have many special memories of this place but Hidden Valley has been one of the circuits that has eluded me,” Davisoin said.

“I have never won here which has eaten at me. I have had four pole-positions and plenty of podiums but never broken through. The thing about this place is that you always have a good time. It is a great event that gets embraced by the community and it is a special event and a highlight on the calendar. It is also an event that I am still very keen to get a win at.

“It would be pretty special to be able to do it on the weekend where I celebrate my 500th race start, but really I couldn’t care what race number it was if I could get the win. As a team it makes no difference and we are just focused on executing at a very high standard.” Will Davison’s future has been the subject of speculation.

While he did not comment on his future beyond the end of the year, Davison declared he was up for the fight.

“I love the pressure that comes with driving for a team like this,” Davison said.

“There is big pressure on us to perform at all times and it is great when you are in a team of this calibre and you all have the same winning mindset.” 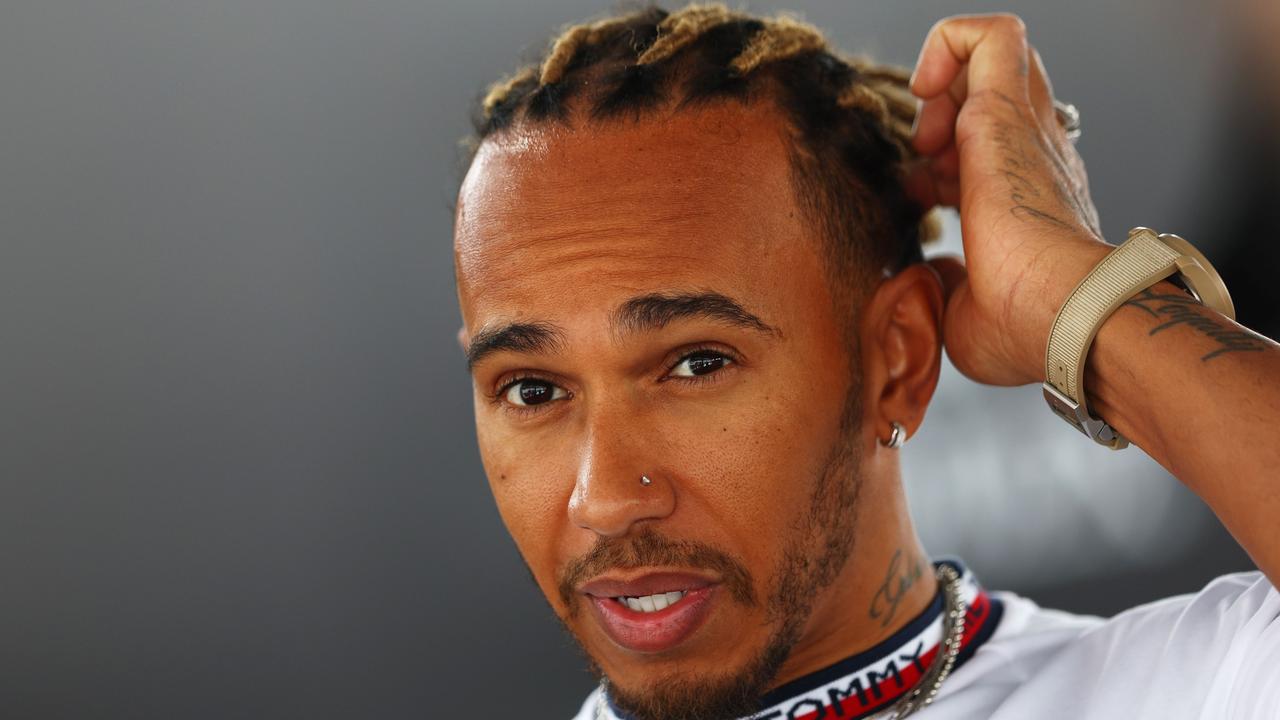