Sitting at the bottom of the table and with nothing left to lose in 2022, Sunshine Coast Lightning took their revenge against the Queensland Firebirds. Meanwhile, the Vixens did their thing. Sitting at the bottom of the table and with nothing left to lose in 2022, Sunshine Coast Lightning took their revenge against the Queensland Firebirds in Saturday’s Battle of the Bruce.

Thrashed by 28 points the last time the two teams met, it was a sweet victory

for Lightning who returned the favour in this match with an unexpected 21 point margin, taking the win 82-61.

The result puts finals almost out of reach for both teams, though with their superior percentage, Firebirds may still be in with a chance if other results fall their way.

Lightning threw in some surprises in their starting seven, with young Annie Miller getting the nod at wing attack and Jamaican Kadie-Ann Dehaney at goal keeper.

The matchup of Miller on experienced Firebirds defender Gabi Simpson proved flawed with the latter getting her hand to two intercepts in the first few minutes of the match. The more experienced Laura Scherian was substituted into wing attack, and was pivotal across the match. 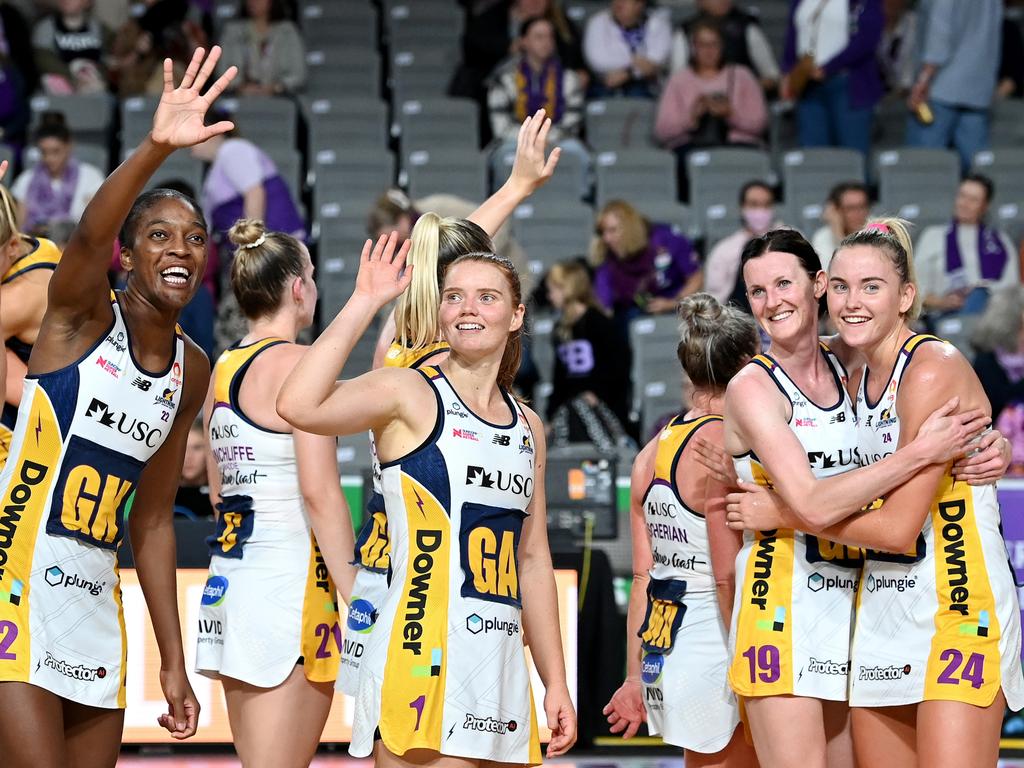 The Firebirds got out to a three goal lead early in the match, but a series of rushed passes saw them turn over the ball which allowed Lightning to score five goals on the trot and steal the lead.

Lightning’s full court defence forced Firebirds feeders to launch the ball from further out. This restricted vision into the circle resulting in fumbles, steps and held balls, as Lightning extended their lead out to 13 part way in the third term.

All the while, Lightning played off the body and drew minimal whistle.

To add salt to the wound, the Lightning’s shooters of Steph Wood, Cara Koenen and Reilley Batcheldor were accurate under the post shooting at 86% including 7/9 super shots.

Late in the third quarter, Wood left the court with a suspected knee injury. The injury sent fear through Lightning and Diamond’s fans alike but sideline reporter, Laura Geitz, confirmed it was just a minor jar to the right knee and she would sit out the rest of the match as a precaution.

In an attempt to draw back the scoreline, the Firebirds emptied the bench but it was to no avail. The changes didn’t worry Lightning in the slightest as they took a convincing win and bragging rights into 2023.

Firebirds’ high penalty count didn’t help their cause today. Penalties have been a sticking point for the home team for many years, but in today’s match they were quite unruly with 69 in 60 minutes.

The Melbourne Vixens proved they are indeed the form team of the competition, defeating the NSW Swifts 59-53 in front of a passionate home crowd in Melbourne and cementing their position at the top of the Super Netball ladder.

The Swifts’ intentions were clear from the start of the match with every win crucial as they attempt to qualify for the impending finals.

The defensive pressure of the visitors was intense from the very first whistle, with the in-form pair of Sarah Klau in goal keeper and Maddy Turner in goal defence stamping their authority on the game early.

The most anticipated match up of the game was between the two centres - Liz Watson and Maddy Proud. The Diamonds’ captain Watson is rarely matched for skill and class, but Proud - who was not selected in the Australian squad for the Commonwealth Games - has been in sensational form in recent weeks and brought plenty of fire to the contest.

After the Swifts pushed out to a five-goal lead, the Vixens shuffled their midcourt, bringing Kate Eddy into wing defence and shifting Kate Moloney forward to centre, allowing Watson to play her preferred position of wing attack.

The changes had immediate impact and the home side began to look more assured and in control as Moloney put in the hard work on the ground in a player of the match performance, which allowed Watson more time and space to use her flair in attack.

It was only in the final quarter that the Vixens began to stretch the lead out, with the Swifts failing to keep pace with the speed of the home team’s attack.

The experienced Vixens defensive pairing of Jo Weston and Emily Mannix stifled the flow in the Swifts’ shooting circle, forcing Helen Housby and Sophie Fawns to pass the ball out of the circle multiple times to find position.

The Vixens’ lower penalty count (55-69) and grinding down of the Swifts’s defence through their superior 53% time in possession began to pay dividends late in the game and the energy in the stadium built to a crescendo.

Despite a late flurry of super shots from Housby, the Vixens kept their cool heads and came away with a six goal win to take the Sargeant-McKinnis Cup and continue their charge for a home semi-final with three rounds remaining.