‘The worst 72 hours’: How NFL reworked its strategy to navigate Covid minefield

An unprecedented number of cases with predominantly asymptomatic players sparked tension and prompted the league to rethink its pandemic strategy.

Tensions inside the National Football League were flaring in every direction last week as a new phase of the Covid-19 pandemic erupted.

Record numbers of players were testing positive. Three games were on the verge of being cancelled, executives around the league said, something the NFL had avoided in its first pandemic season. Everyone involved understood that the viability of the rest of the season was at stake.

Yet there was no unanimity over how to answer a question no one expected to face during the NFL’s second pandemic season: How should the league handle an unprecedented and unforeseen surge of cases?

Team executives were exasperated over players getting shelved by the protocols and the competitive implications of the disrupted games. And as more players entered the league’s Covid protocols — despite most of them showing no sign of illness – they assailed both the league and their own union over the uncertainty.

“It was the worst 72 hours since the pandemic,” one executive said.

The NFL eventually responded with a series of sweeping protocol changes to prevent the season from crumbling under the weight of new cases. It ended weekly Covid testing for asymptomatic and vaccinated players, while also providing a quicker path for those who return to the field. 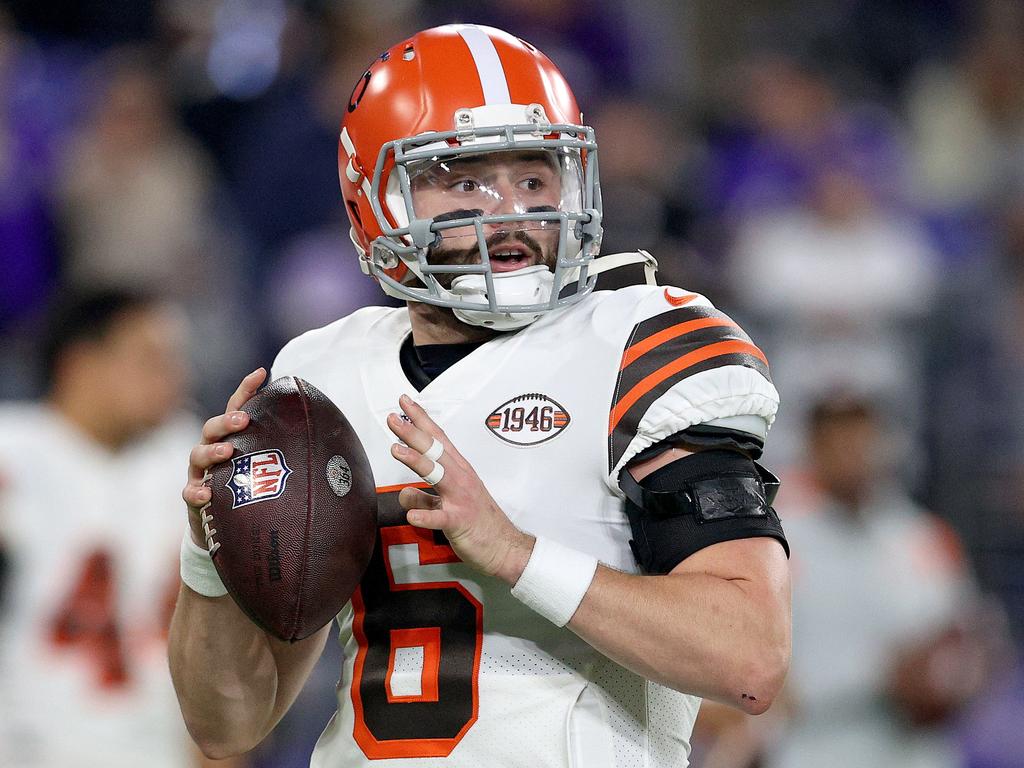 Cleveland Browns quarterback Baker Mayfield lashed out at the NFL on Twitter over the fate of his team’s now-postponed game. Picture: Rob Carr/Getty Images

The league also did something it had no intention of doing when its second season began: it postponed — but ultimately didn’t cancel — three games involving teams with large outbreaks.

The league’s tactical shifts were necessary in order to keep credibility with players, one team executive said. The NFL’s 2021 protocols were designed with carrots and sticks to incentivise players to get vaccinated — yet, once Omicron hit, the vaccinated players were testing positive en masse anyway and subject to missing games.

“The carrots were fading,” the executive said.

It was all evidence of how the pandemic problems of 2021 are much different than they were in 2020.

“In many respects, Omicron appears to be a very different illness from the one that we first confronted in the spring of 2020,” commissioner Roger Goodell wrote in a Saturday memo to teams.

It was already clear that the status quo was unsustainable when the league’s owners gathered in a glitzy Dallas-area hotel last Wednesday for meetings that just happened to coincide with dozens of players testing positive.

The health outcomes of those players, around 95% of whom league-wide are vaccinated, were encouraging. The league said two-thirds of the positives were completely asymptomatic while the rest had very mild symptoms. Still, the mounting case tally threatened to gut rosters.

League officials said publicly in the middle of the week that there were no plans to postpone the games involving the Los Angeles Rams, Cleveland Browns and Washington Football Team, each of which had 20-plus cases that had decimated their rosters. But behind the scenes, according to another executive, the possibility of cancelling those games was “very close.”

Cancellations would create difficult problems. Unlike last season, when the NFL was able to shift games around using teams’ off weeks, that wasn’t a possibility so late in this season. In a July memo to teams, Goodell had also made clear that only medical concerns, not competitive considerations, would lead to rescheduling games. The memo also said if a game had to be cancelled because of an outbreak among unvaccinated players, that team would forfeit. “In many respects, Omicron appears to be a very different illness from the one that we first confronted in the spring of 2020,” commissioner Roger Goodell wrote in a memo to teams. Picture: Sean M. Haffey/Getty Images

Even more problematic: all six teams in the at-risk games — Raiders-Browns, Seahawks-Rams and Washington-Eagles — are in the playoff hunt and would have played one fewer game then their counterparts. The NFLPA, meanwhile, was outraged because if the games were called off, the hundreds of players for those teams would miss out on their game paychecks, according to one of the executives.

Meanwhile, according to one of the people, the Eagles expressed their unhappiness to the league, believing the game should be played Sunday as scheduled or otherwise forfeited because of their belief Washington’s outbreak started with an unvaccinated player. Philadelphia players publicly complained, including cornerback Darius Slay who tweeted: “Damn I thought the team would have to forfeit!!! This crazy.”

Other options were even less appealing. The league had never wanted to add a 19th week to the 17-game regular season to accommodate postponements, but that was especially true with the onset of Omicron.

Adding an additional week would only delay the season further into a time when the healthcare system could be stressed or overwhelmed.

It also needed to preserve the one bit of flexibility left on the calendar — the extra week between the conference championships and the Super Bowl — for use in the event of a pandemic-related playoff crisis.

Meanwhile, the NFL faced public criticism from one of its most prominent stars.

“@NFL Make up your damn mind on protocols,” tweeted Cleveland Browns quarterback Baker Mayfield after he was sidelined by Covid.

When the league on Friday announced postponements – not cancellations, after a push by the NFLPA — it ensured that players wouldn’t miss a paycheck. But some Raiders players, who were about to fly to Cleveland when they learned of the delay, took aim at their own union, with one insinuating that it was a choice that favoured the Browns because Cleveland centre J.C. Tretter is president of the NFLPA. (The implication could have been that a postponement benefits the Browns, as it would the Rams or Washington Football Team — because it would allow them more time to return players from Covid isolation and thwart an outbreak.) One Los Angeles Raiders player accused Cleveland center J.C. Tretter — president of the NFLPA — of pushing for a postponement of the teams’ game because it would help the Browns. Picture: Jason Miller/Getty Images

“I’m sure the @NFLPA president playing for the Browns didn’t have any effect on these negotiations…” Raiders defensive back Casey Hayward tweeted. Tretter, through an NFLPA spokesman, declined to comment.

As the week wore on, though, the sides pivoted toward solutions based on the data they were seeing. The 100-plus cases, which they believe to be due to Omicron, also provided a robust sample size about the outcomes in their almost-entirely vaccinated population: Covid was spreading rapidly but the symptoms were non-existent or mild. The turning point was seeing that hardly anyone was getting sick.

The league said two-thirds were asymptomatic, while a doctor for the Washington Football team said of the team’s 23 positives, only two were sick enough that he would have held them out of practice if not for the protocols that state positive players have to isolate.

That convinced the NFLPA — which had previously called for daily testing before the season — and NFL to agree on a new approach. On Thursday, they reintroduced physical safety measures — such as social distancing inside facilities and mask wearing — to limit the virus’s spread. They also installed new rules to allow vaccinated positive players to test back into action sooner, after as soon as one day, based on factors such as not just whether they’re positive or negative, but how much virus is in their system.

Most notably, the league and union agreed Saturday to cease testing asymptomatic vaccinated players every week — a dramatic new strategy to prevent the situation from snowballing in the days ahead, when more players would test positive without symptoms and plunge the spurt even further into chaos. Unvaccinated players will still be tested daily. The fleeting romance of the NFL Draft

Take a really close look at the moment when the No. 1 pick and his new team start talking about each other. In virtually every case, the highest point of the relationship between drafter and draftee will be at that precise time.