Fox Sports Lab: Why Broncos‘ problems with Storm run deeper than their 2-20 record The Broncos have had a tough time against Melbourne in recent history. Picture: Bradley Kanaris/Getty Images

Friday’s clash between the Storm and Broncos looms as Brisbane’s biggest test this season.

Despite a run of seven-straight wins, their best streak since 2015, only two of those victories have come against top-eight teams. In Melbourne, they face one of the competition’s elite sides and one expected to be there at the pointy end of the season.

Since 2011, the Broncos’ record against the Storm has been their worst of any team in the competition.

Brisbane have won only two of their 22 matches against the Storm (9.1 per cent).

Their next lowest record is eight wins in 19 matches (42.1 per cent) against Parramatta. 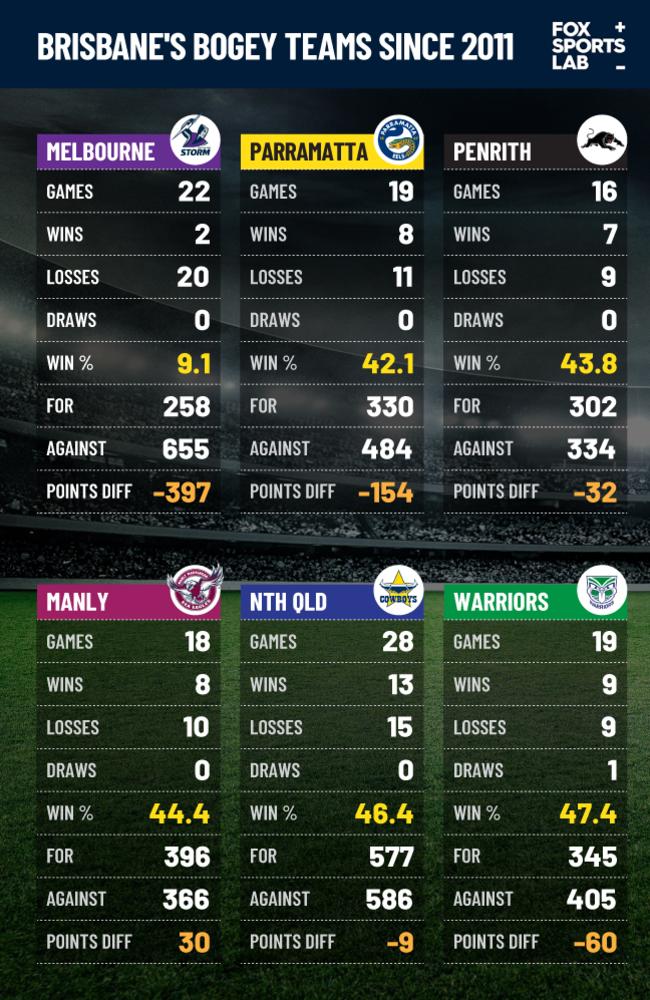 Brisbane has struggled against Melbourne.

Brisbane’s two wins in that time both came at AAMI Park, the most recent in round 25, 2016.

Of significant concern for the Broncos is the margin of their defeats to Melbourne. Eleven of their 20 losses have been by 20 points or more. They have lost their past four matches to the Storm by a combined margin of 136 points.

While the past decade has been an era of dominance for the Storm, their record against the Broncos is their best of any side. Most telling has been Melbourne’s territorial superiority.

In that 22 match span, the Broncos have only made more metres than the Storm once. In each of the past four meetings, the Storm ran for 500+ metres more than Brisbane. 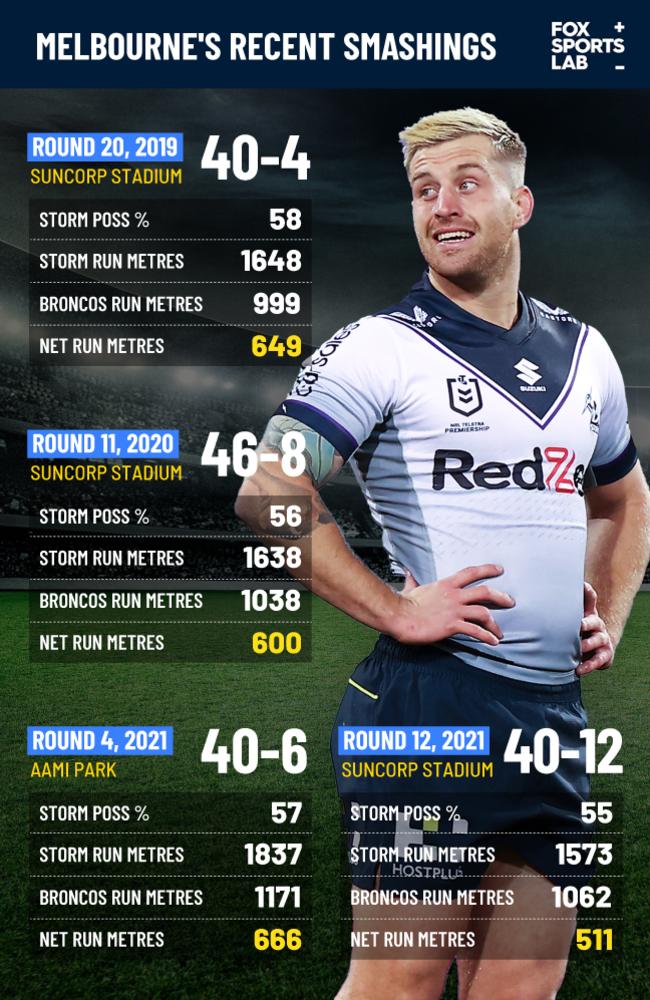 Melbourne has dominated the past four meetings.

As this year’s competition shows, the teams performing consistently well are the ones that are winning the net run metre battle. The Broncos haven’t been able to do that against Melbourne in the last decade.

That has been a constant trend for the Broncos over the past few seasons, struggling to make an impact on the territory fight with Payne Haas left to do the heavy lifting.

However, a measure of the improvement of Kevin Walters’ side in 2022 has been their increased run metres.

This year, the Broncos are registering the sixth-most run metres in the competition per game (1,449 metres). They also have the fourth-most post-contact metres (484 metres per game).

It has been a clear area of focus for the Broncos this year, in particular, spreading the workload across the forward pack.

In comparison to the top sides in the competition, like the Storm, those numbers stack up favourably.

Melbourne sits just behind Brisbane for run metres this season with 1,428m per game. The Broncos also just edge them out on post-contact metres with the Storm registering 460m per game. Brisbane’s forward pack are putting in the work this season.

Another area where the Storm fall behind the Broncos is the spread of workload. Melbourne only has one forward, Nelson Asofa-Solomona, who averages more than 100 run metres per game (108m). Five of their forwards average in the 80-100m range, however.

The concern for Brisbane is that defensively their improvement has not been as rapid.

Melbourne is the second-best defensive unit for limiting metres, only conceding 1,216m per game. Recent trends have shown that the Storm-Brisbane match-up has been dictated by the territory battle, a fight that has regularly been won by Melbourne. Unless the Broncos can put in a stronger defensive performance, that trend is likely to continue.

Brisbane’s trip to AAMI Park is set to be made even tougher without several key players. Adam Reynolds and Herbie Farnworth have been ruled out while Haas has been named despite suffering a shoulder injury against the Raiders.

It means the Broncos will be forced to rely on some of their more unheralded stars to get the job done. However, those players have been responsible for their improved performances in this recent streak. Since Te Maire Martin moved to fullback and Billy Walters slotted in at hooker in round seven, the change in output has been enormous. Between rounds one to six, the Broncos ranked in the bottom four for points scored, points conceded, run metres, linebreaks and linebreaks conceded.

From round seven onwards, they have moved into the top four in the competition for each of those categories. The run metres turnaround is the most startling change with Brisbane leading the NRL since their round seven clash against the Bulldogs.

They have also generated more tackle busts than any team in the competition in that time (36.3 per game). It has been their outside backs contributing the most with Farnworth, Selwyn Cobbo, Corey Oates and Kotoni Staggs all averaging three or more tackle busts a game.

The Broncos’ outside backs have been more efficient with their attacking output. The outside backs have thrived for both teams.

Despite averaging fewer possessions a game, both Farnworth and Oates have dramatically increased their output. Farnworth has double the try involvements while Oates’ run metres and tackle busts have been well up on his 2021 levels.

It’s a similar story with the Storm.

Their spine of Ryan Papenhuyzen (when fit), Cameron Munster, Jahrome Hughes and Harry Grant have taken a lot of the plaudits but it’s their consistency across the board contributing to their success.

Josh King has been a standout. King averages 94 run metres a game, up from 2021 when he was just a bench player with Newcastle. He has also played all 13 matches for the Storm, on track to eclipse his previous best of 18 matches last year with the Knights.

Justin Olam is another to have upped his performances in 2022. Despite already being one of the best centres in the game, his form has gone slightly under the radar this year in a team filled with stars.

He is also the best in the competition at providing options, showing how important he is to the Storm’s attacking efforts.

While the big-name stars will dominate the headlines, expect Friday night’s clash to be won on the back of performances from players who continue to improve year on year to help their teams. 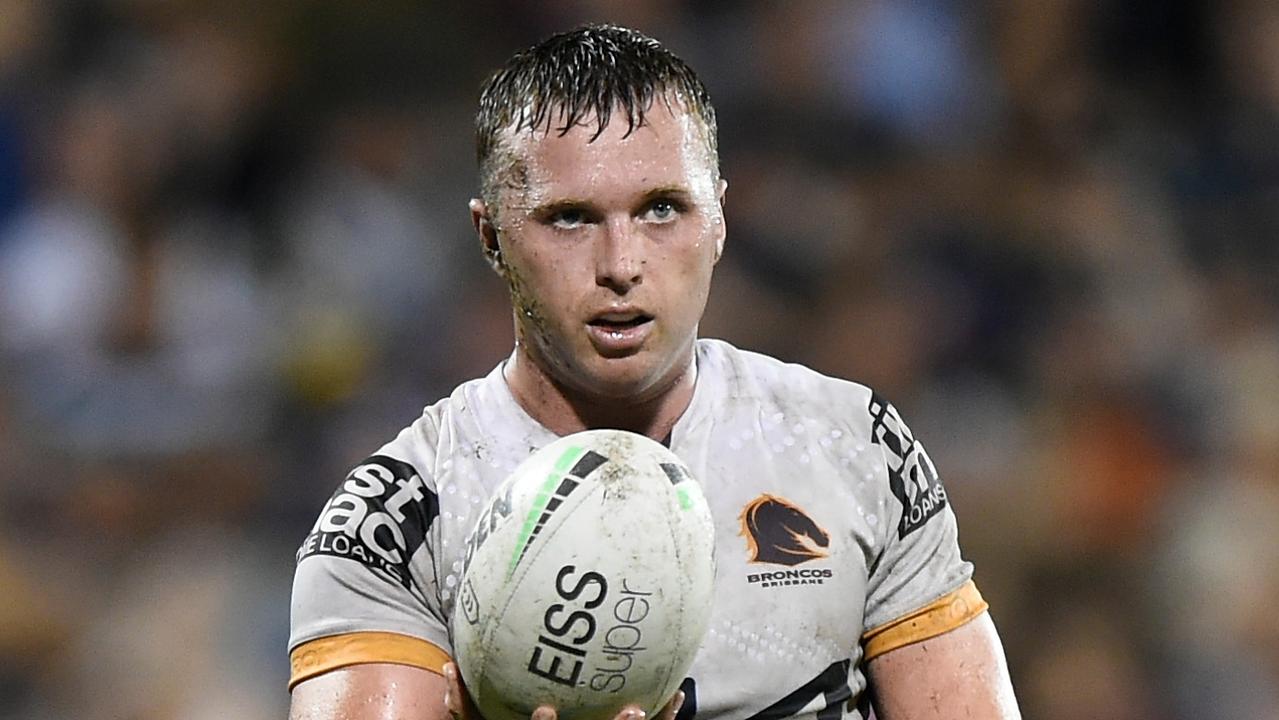 Jake Turpin’s fall has been a tough one, with the gutsy hooker having gone from winning an award as the club’s most consistent player to being unable to find a home in 2023. 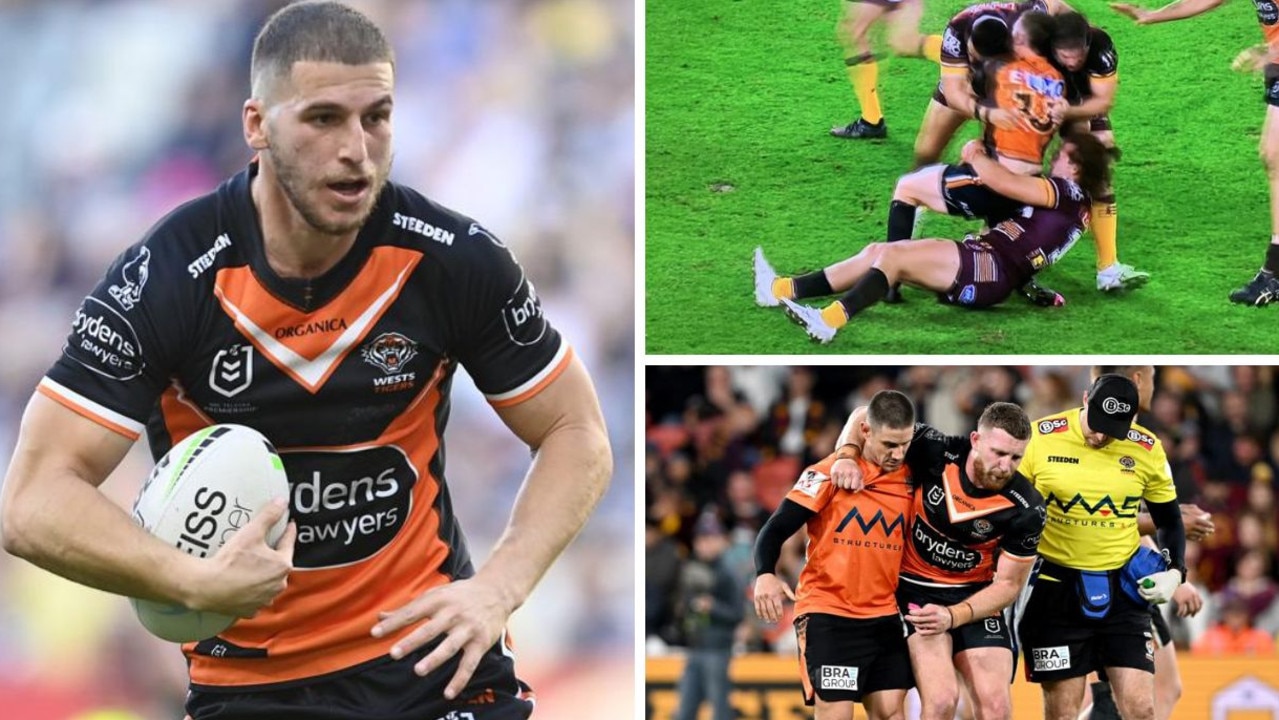 Wests Tigers star Adam Doueihi believes Pat Carrigan got off lightly for the ugly hip-drop tackle that ended Jackson Hastings’ season and the judiciary needed to dish out a longer ban. 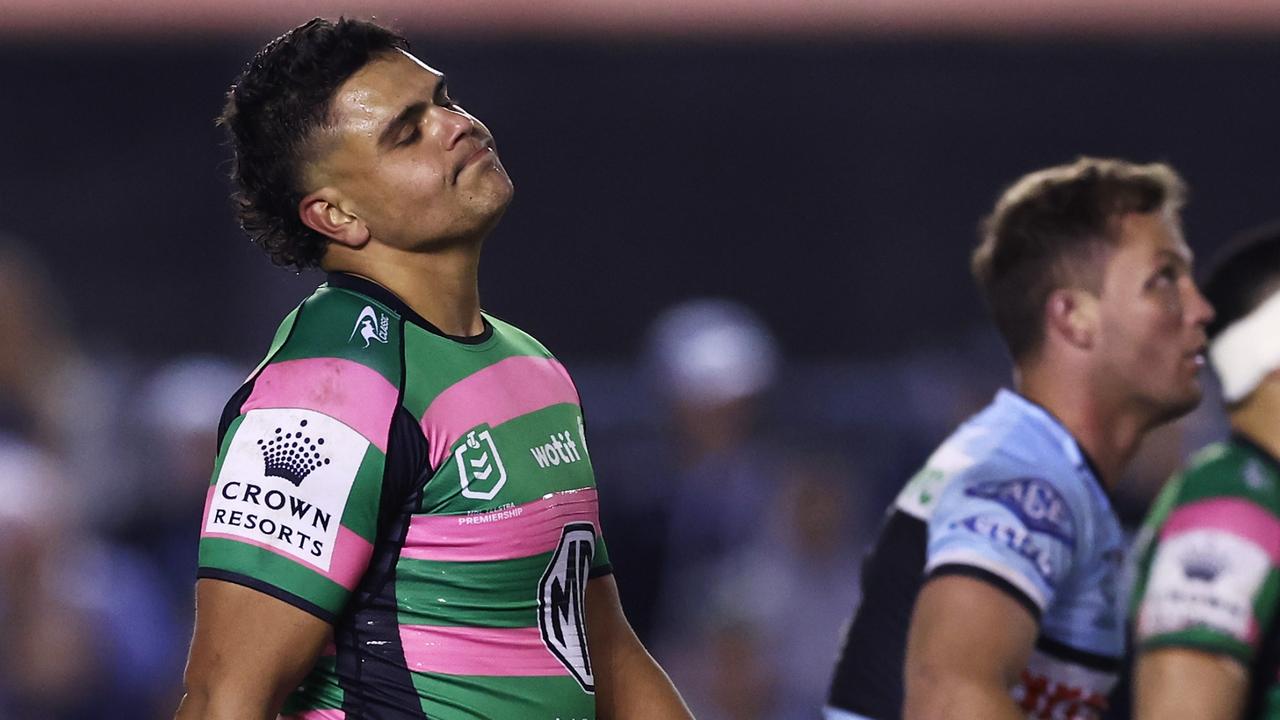