Fox Sports Lab: Joseph Manu’s performance for the Kiwis was one of the greatest on record

Joseph Manu has starred for the Roosters but, as LACHLAN MCKIRDY writes, his game for the Kiwis was on another level. Whether it was Josh Schuster with tears running down his face during the Samoan national anthem or Tongan fans singing in harmony in Auckland, the return of the international representative round brought with it displays of passion rugby league had been missing.

Despite the emotional buy-in of players and fans, however, the mid-season Pacific Tests are set to be scrapped for the next five years.

This is what we’ll be missing. 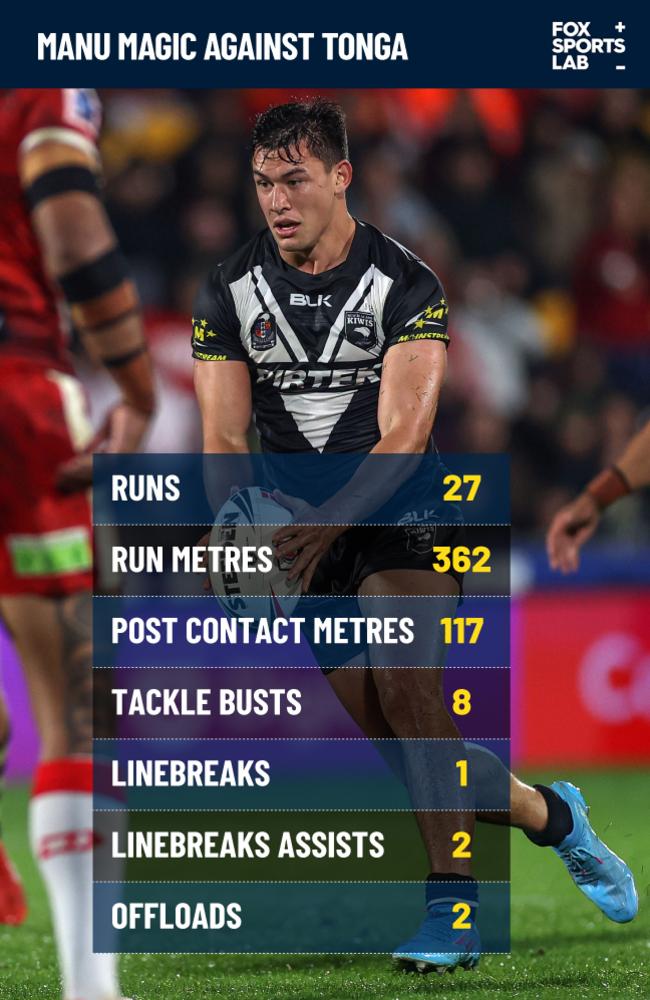 The magic of Joseph Manu.

Joseph Manu, playing in the No.1 jersey for New Zealand, covered every blade of grass on Mt. Smart Stadium as he put in one of the most incredible 80-minute performances we’ve ever seen.

He ran for 362 metres from 27 carries with 117 post-contact metres and eight tackle busts.

His eight tackle busts were impressive but paled in comparison to David Nofoaluma for Samoa. The Wests Tigers flyer busted through 11 tackles on his way to 211 run metres and four tries against the Cook Islands. The Cook Island defenders could do little to contain David Nofoaluma, who racked up an impressive 11 tackle busts for Samoa. Picture: Mark Kolbe/Getty Images

In Fox Sports Lab’s database of over 160 international Tests, Nofoaluma’s 11 tackle busts are the equal second-most on record.

For Nofoaluma personally, not even in his under 20s days for the Wests Tigers has he recorded four tries in a game before.

However, the breakout star of the round was Fijian fullback Sunia Turuva.

The 19-year-old from the Panthers isn’t in their top 30 squad but was selected for the Bati and did not disappoint. 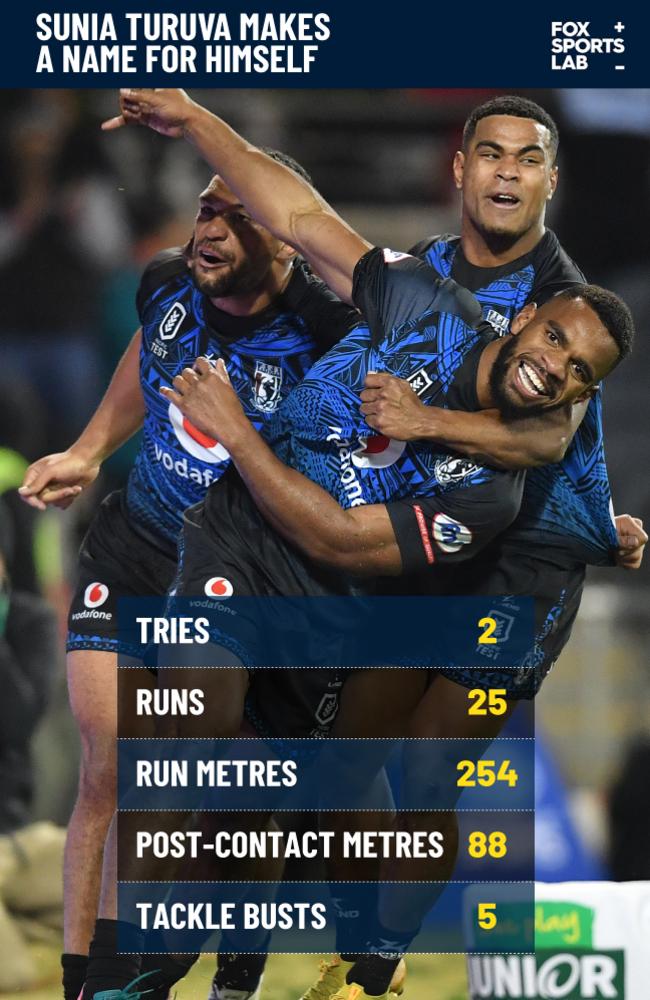 Sunia Turuva makes a name for himself.

In front of almost a hundred of his friends and family in Campbelltown, Turuva scored two tries and ran for 254 metres. Despite Papua New Guinea getting the win, the plaudits rained in for Turuva who has yet to make an appearance for Penrith in the NRL.

He wasn’t the only Fijian to light up the stats sheet with dummy-half Penioni Tagituimua creating a record of his own. Like Turuva, Tagituimua hasn’t made an appearance in the NRL but if a team is on the lookout for a player willing to take on a high defensive workload, he’s their guy.

The 23-year-old made a game-high 60 tackles against the Kumuls. According to Fox Sports Lab, no player has ever made more tackles in an international match.

While Saturday showcased the emotional connection that players have to representing their countries, it can’t be forgotten how important the round is for providing a platform to players who may have otherwise gone unrecognised. Penioni Tagituimua was a record breaker for Fiji in their match-up against Papua New Guinea. Picture: Mark Kolbe/Getty Images

While Manu’s performance for New Zealand was incredible in an international context, it also ranks highly with some of the greatest statistical matches witnessed in rugby league.

His 362 run metres are the second most on record for Fox Sports Lab; just edged out by Brett Hodgson’s herculean effort for NSW in 2002. 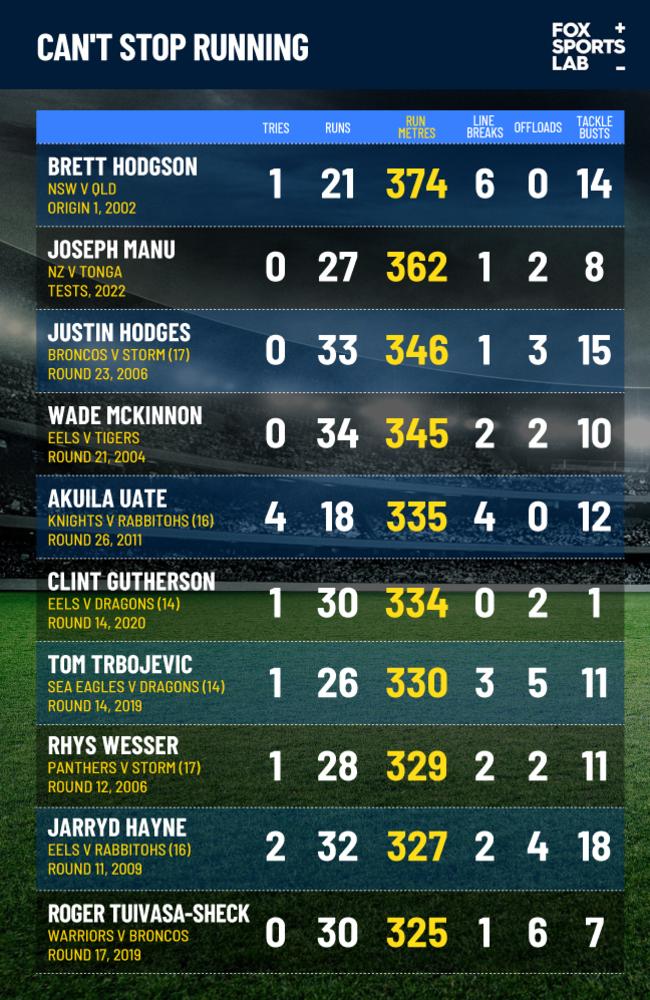 Hodgson had 374 metres from 21 runs, including six linebreaks. Throw in the 14 tackle busts and it’s a performance that deserves greater recognition given the quality of the arena he was playing in.

He more than doubled the next best run metres of any of his teammates (Luke Bailey with 185 metres). He had more linebreaks than the rest of NSW combined.

Unfortunately for the Blues’ fullback, that series is mainly remembered for him being ragdolled by Gorden Tallis in Game III - an unfitting memory for a record-breaker.

But it shows the calibre of Manu’s efforts for the Kiwis that he sits second behind an individual performance considered the best of all time, not just in the Origin arena but in NRL and Tests as well. Manu’s meters were a head and shoulders above the rest in the Kiwis clash with Tonga. Picture: Hannah Peters/Getty Images

Other notable performances with over 300 running metres include Akuila Uate’s four-try epic against the Rabbitohs back in 2011. The Knights flyer made four line breaks and 12 tackles busts in one of the most dominant matches from a winger in the NRL era, while Jarryd Hayne also put the Rabbitohs to the sword back in 2009 where he ran for 327 run metres and registered 18 tackle busts.

Uate is the only player to make this list having played on the wing.

The rest, including Justin Hodges, played at fullback.

But it’s not just fullbacks who finish games with incredible stat lines. In 1988, Queensland prop Sam Backo produced one of the more remarkable individual games ever seen in the third Origin encounter.

The starting prop scored two tries, and had a third controversially disallowed, to finish with 183 run metres, 10 tackle busts, five line breaks and 18 tackles. It was just one of many memorable matches for Backo that season, who went on to be named the Dally M prop of the year.

The most impressive in terms of attacking output was easily Tom Trbojevic against the Warriors last season.

The Manly fullback had two try assists and four try assists to go with 201 metres, form he continued throughout the year as he went on to claim the Dally M medal. 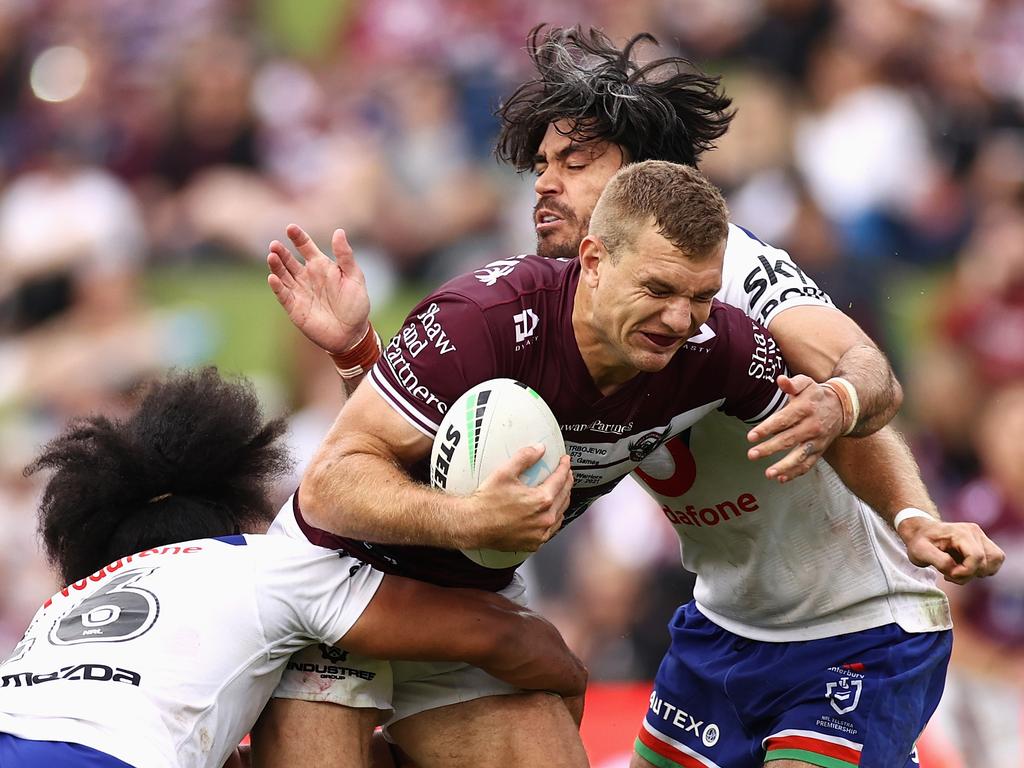 Tom Trbojevic’s stunning round nine performance in 2021 was an attacking effort for the ages. Picture: Cameron Spencer/Getty Images

But arguably the most complete performance in the NRL era belongs to a surprising name: Anthony Watmough. He was at the peak of his powers in 2009 and produced his best in the Sea Eagles’ narrow 19-18 defeat on Monday Night Football in round 21.

Manu has long been considered one of the most damaging players in the NRL. But his incredible effort for the Kiwis against Tonga well and truly ranks him alongside some of the most elite performances we have ever seen in rugby league. 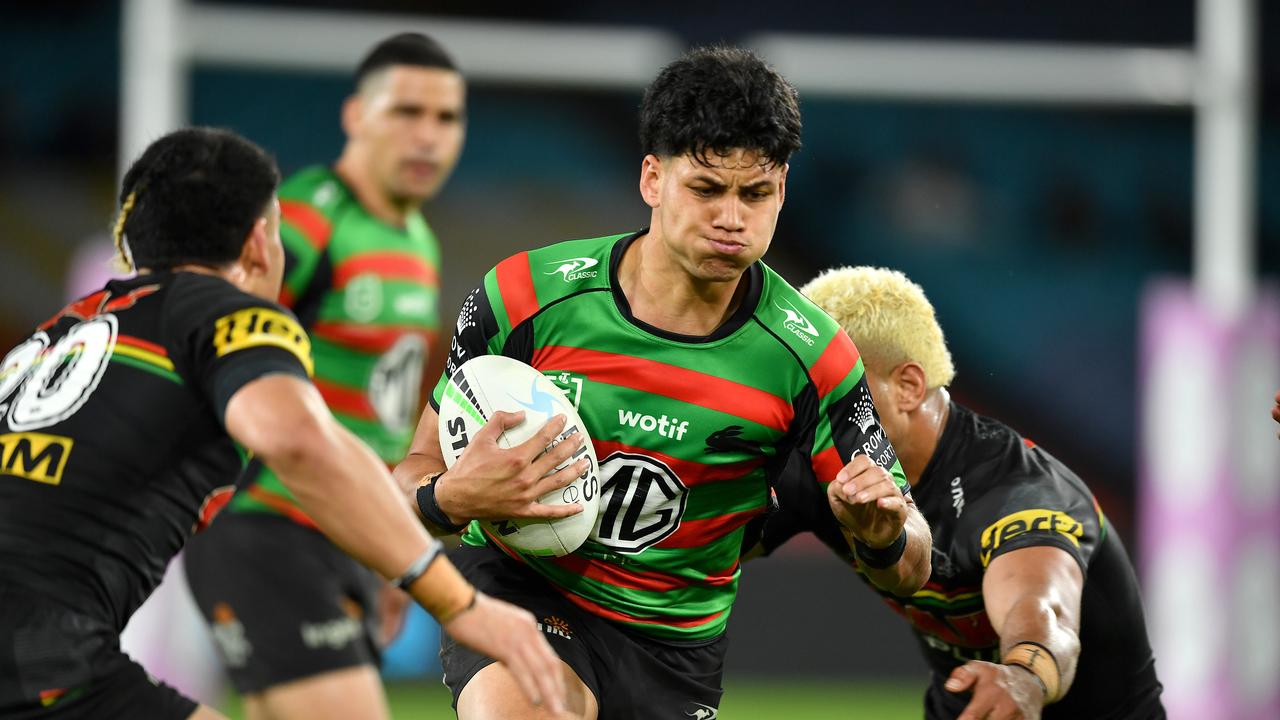