The Broncos have dashed Parramatta’s hopes of raiding their ranks for a replacement for injured winger Haze Dunster.

The Broncos have issued a hands-off edict to Parramatta after fielding an approach from the Eels to sign Brisbane flyer Jamayne Isaako in the wake of Haze Dunster’s horrific injury.

The Eels are on the lookout for backline options following the shocking season-ending injury to Dunster, prompting Parramatta chiefs to make inquiries with the Broncos over the potential services of Isaako.

The Kiwi Test winger is contracted to the Broncos this season, but will sever ties with Brisbane at season’s end to join Wayne Bennett’s Dolphins for their foundation year in 2023.

Given Isaako is not a long-term proposition at the Broncos, the Eels were hoping Brisbane would be amenable to brokering an immediate transfer for the 25-year-old to wear blue and gold for the rest of this season.

But Broncos bosses have no interest in an early release for Isaako, who remains in the hunt for Brisbane’s No.1 jumper for round one after first-choice fullback Tesi Niu injured his hamstring at training last week. Isaako started at fullback in Brisbane’s 26-all trial draw to the Titans last Saturday night and is also an option for a wing spot for the Broncos’ season opener against Souths on March 11.

Isaako has seemingly fallen down the pecking order of fullback options at the Broncos despite playing 13 games at the back last year, but Brisbane coach Kevin Walters insists he has not given up on the Dolphins-bound goalkicker.

“Jamayne is certainly in the mix,” he said. “He had some time against the Titans and he is very versatile, so while he is going to the Dolphins next year, he can certainly play a role for us this season.”

Meanwhile, Walters says the Broncos’ No.6 jumper remains up in the air, with Billy Walters and Albert Kelly to start in the halves against the Cowboys this Saturday night in their final audition to partner Adam Reynolds at the scrumbase.

Walters refused to dismiss the hopes of Tyson Gamble, who showed promise at five-eighth last season.

“There’s a battle on there at five-eighth,” he said.

“I have some ideas in my head but nothing is over the line until we get through this weekend’s game. Someone could jump out of the ground that’s for sure.

“Tyson will get an opportunity this weekend as well and Ezra (Mam), he hasn’t had as many opportunities as the other guys, but we are trying to be fair to all of them and give them equal opportunity to put their best foot forward.

“I’ve got some ideas around who our halves should be for round one, but it all depends what happens this weekend.”

But Griffin says the lengthy suspension is nothing compared to the “devastation” the young Dragons forward is feeling for the shocking injury the controversial tackle caused to his soon to be brother-in-law.

In a shocking twist to the ugly incident that marred the Dragons’ 26-22 win over Parramatta in Sunday’s NRL trial, it turns out Dunster is engaged to Fuimaono’s sister, Taliah, a Dragons’ NRLW star who Dunster has been seeing for more than six years now. But that only made it worse when scans on Monday revealed Dunster, 21, had ruptured his anterior, medial and posterior ligaments, meaning he will be out of action for the entire season and also be lucky to make it back for the start of next season.

Griffin had Fuimaono in his office on Monday morning when he learned he had been hit with a grade three dangerous tackle charge.

Fuimaono was facing a potential seven-match ban had he contested the charge and lost at the judiciary, but Griffin says the Dragons would not be going down that road.

“He is going to cop the five weeks,” Griffin said.

“It is just unfortunate. He is devastated.

“The kid (Dunster) is his sister’s fiancée, so they are all very close.

“He didn’t mean to do it. It is unfortunately a terrible accident. But he is very remorseful and he will cop the early plea.” The tackle has divided opinions within the NRL, with some believing it was not deserving of a lengthy ban given it was not intentional.

But while Griffin was adamant Fuimaono did not set out to injure his good mate, he also concedes it is a flaw in Fuimaono’s technique that he has to get out of his game.

“They are the rules,” Griffin said. “Certainly we don’t practice them.

“There is obviously something in Tyrell’s technique, or his muscle memory, that it has happened a couple of times.”

Fuimaono was also charged with a hip drop tackle last year on Dane Gagai, while he was also banned for five matches for the ugly high shot on Ryan Papenhuyzen during Magic Round that left the Melbourne Storm fullback heavily concussed.

Griffin was at pains to point out Fuimaono was not a thug.

“I just want to reassure you he is not a bad person,” he said.

“But he is terribly regretful and remorseful. 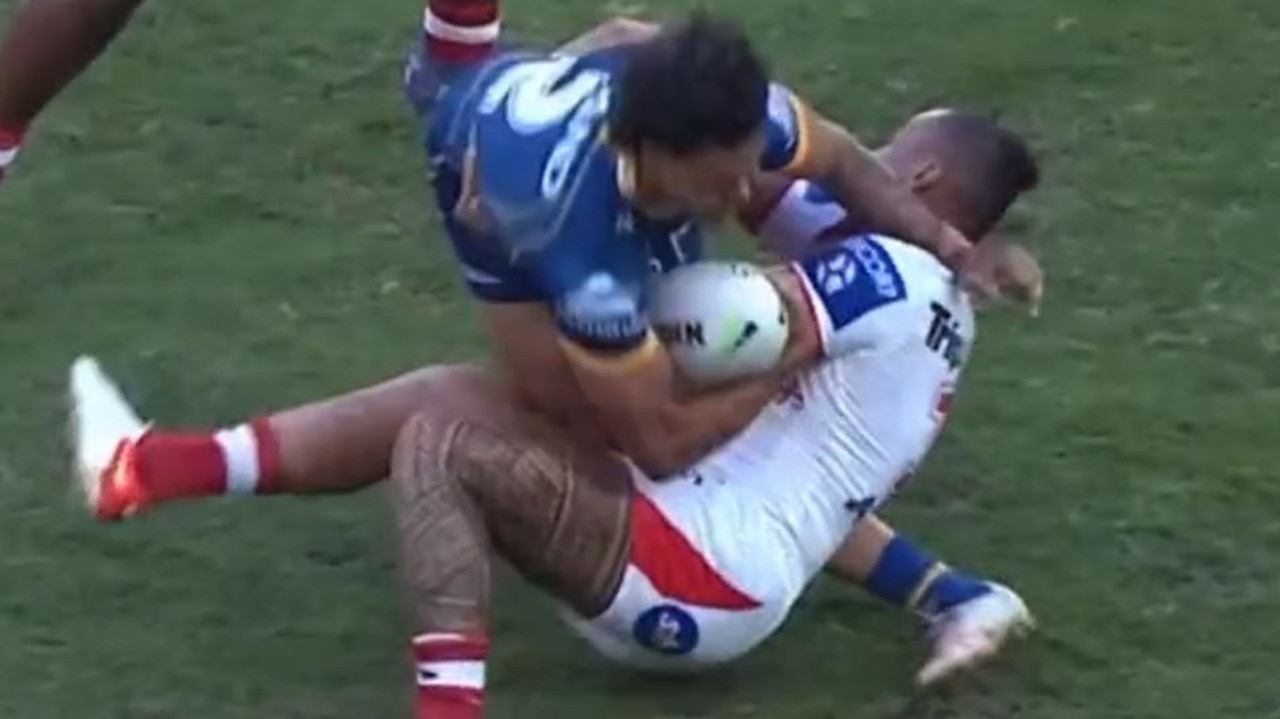 The tackle on Haze Dunster by Tyrell Fuimaono.

“I had him in today.

“He obviously put his body in that position but totally without intent. We have to work hard with him on his technique.

“We never, ever practice anything like that. We actually practice the opposite, to keep your feet and drive through with your legs.

“That is what he was sort of saying today.

“He is at a loss himself (saying), ‘I don’t know how I get myself in those positions’.

“But he is really shaken up about it. He just feels so remorseful.

“He is obviously mates with the other kid and he is part of the family.

“It is not a nice situation.” Dunster was in line for a starting berth on the Eels’ wing, following the departure of Blake Ferguson and the recovery from a knee injury to Maika Sivo, which will keep him out for up to the first three months of the season.

“Haze will undergo surgery in the coming days and then will begin an extended rehabilitation period,” the Eels said in a statement.

New recruit Bailey Simonsson is expected to fill one place on the wing, while Eels local junior Sean Russell is now in line to start the season on the other flank.

Russell, Matthew Komolafe and Solomone Naiduki all spent time on the wings against the Dragons and all showed flashes of promise.