How the Melbourne Storm found the champion within Nick Meaney

Nick Meaney dodged a bullet when a contract bungle saw him avoid signing with the Tigers, ultimately freeing him up to fulfil his potential at the Melbourne Storm.

Nick Meaney has a story every NRL coach in the game should share with their players.

Impatient parents and teenagers thinking they should be in the NRL, need to flick through the Meaney story.

On Saturday night, he’s wearing the famous purple of the Melbourne Storm in the biggest game of the year against premiers Penrith at Magic Round in Brisbane.

Remembering how he got here, Meaney will also be a wearing a smile.

Look close enough at the baby-faced Ballina beach sprint champion and you’ll spot the scar-tissue, born from the mental anguish of wondering if his award-winning talent as a junior league star, would ever be realised.

Meaney has bided his time on less than $200,000 contracts to emerge as the Storm’s “new Nicho Hynes”, with the ability to play any position in the backline, including as the cover for injured fullback Ryan Papenhuyzen.

That was exactly what Storm coach Craig Bellamy said when the fullback, wing, centre or five-eighth sat down at a cafe on the Sunshine Coast last year. “There was no guarantees for Nick, but we needed a bloke like Nicho who could play a number of positions and that was the discussion from day dot,‘’ Storm GM of football Frank Ponissi said.

“His attitude, of not asking ‘what position will I play?’, but instead ‘I’m willing to play any position’ or even with our feeder-club Brisbane Easts, blew us away.

The young father, who is married to high school sweetheart Shania and share seven-month old baby boy Reign, is where he belongs after four years of losing dressing rooms, three homes in three cities, reduced contracts and a wooden spoon. There’s been foot surgery, broken ribs and a gory finger injury in a game that left his tendon exposed.

There’s even the previously untold story of agreeing to a three-year deal to play under rival coach on Saturday night, Ivan Cleary, when he was coach of the Wests Tigers.

In 2018, Cleary and former Tigers head of recruitment Kelly Egan courted Meaney to be the club’s fullback.

Meaney, up in Newcastle where he had developed like a bullet through the ranks after being scouted from Ballina, had Kalyn Ponga ahead of him at fullback.

Meaney’s grandfather Denis had also played with Western Suburbs from 1960-1966 so the move felt right.

The speedy outside back agreed to become a Tiger from the 2019 season, that was, until 24-hours later an apology came through from Egan and Cleary.

The club had unexpectedly been offered the chance to sign Moses Mbye from the Bulldogs.

Meaney was told he could still come to the Tigers, but that it would be Mbye, who would be given first shot at the number one jersey.

Wanting to back his talent, which was clear after securing the 2017 NSW under 20’s fullback jumper, Meaney let go of the Tigers deal to take a smaller offer from the Bulldogs.

He and Shania packed up their home in Newcastle and moved for the next three years to Sydney to play for the Dogs. Nick Meaney was a star for Ballina. Picture: Leigh Jensen/ The Daily Examiner

The decision, with the benefit of hindsight, was a poor one for Meaney.

The Bulldogs fragility as a club, at board level, with pressure on their salary cap and on coach Dean Pay, led to an environment revolved around survival first, success second.

Meaney grew-up in a home of rugby league teachers, his father Damon, coaching his son over several seasons with Ballina’s local A-grade side.

The Dogs couldn’t meet Meaney thirst to learn, develop and constantly improve, as he was shuffled from fullback to wing.

Current Canterbury coach Trent Barrett could see the footballer in Meaney, but when his contract expired at the end of last season, the Dogs were no chance of competing with a phone call from the Storm.

Meaney, who not only excelled on the sand or footy field, but could also slam-dunk a basketball at 14, has always been a special athlete.

Not surprisingly, it’s taken the systematic and successful structure of the Storm to thrust Meaney back into the spotlight that he last stood under in 2017 as Newcastle’s NYC Player of The Year. 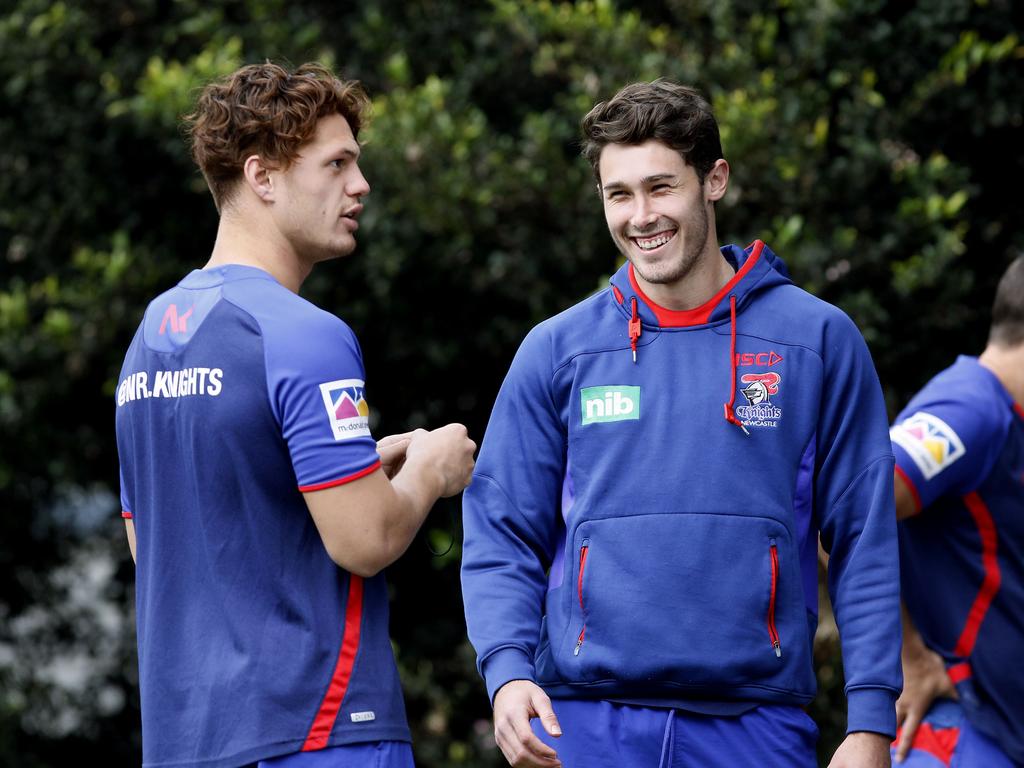 Playing at five-eighth and wing in eight matches for Melbourne this season, he is just four wins away from surpassing the most wins he experienced in three years at Canterbury.

He will also kick goals on Saturday night in the absence of Papenhuyzen.

With Storm legend Billy Slater watching over him at training, Meaney said he was a sponge for development with an understanding of upholding the lofty status that comes with playing in the purple jersey.

“Being in that professional winning environment like the Storm have been ever since they started in the comp has really elevated my game,” Meaney told SEN radio this week.

“There’s a lot of expectation coming to this club of what you have got to be as a player and I’ve just tried to buy into that system as best as I can.

“You look at the Melbourne Storm and they’ve always had that mentality of next-man up.

“You’ve still got to nail your role and keep working hard even when it feels like things are going against you.’’