Both teams filled with a crop of brilliantly talented youngsters who arrived in the NRL simultaneously.

Both entered the season with low expectations, although the Cowboys significantly less than

the ’05 Tigers. The Tigers were viewed as a mid-table prospect, while most expected the

North Queenslanders to languish in the bottom few.

But the area where they are most comparable is the style of football they play.

The ’05 Tigers’ success was built on the vision of coach Tim Sheens.

While teams of that period found success in disciplined football, underpinned by an

aggressive rushing defence, the Tigers totally bucked the trend and played a style based on

skill and ball movement. They played from sideline to sideline, halfback Scott Prince, who

was rebuilding his career, directed the orchestra and the talent around him followed the beat, The Tigers celebrate after victory against the Cowboys in the 2005 Grand Final. Picture: AAP Image/Jenny Evans

Everyone in that team either had or developed a strong level of skill.

And a key man who sat in the middle of all of it was current Cowboys coach Todd Payten.

Payten’s short passing and vision created space, it got his forwards one-on-one tackles and

Cowboy’s team and the style he has them playing.

The demolition of Melbourne last Saturday night was the best example yet.

If you challenge the Storm in a centre-field battle they’re going to beat you. 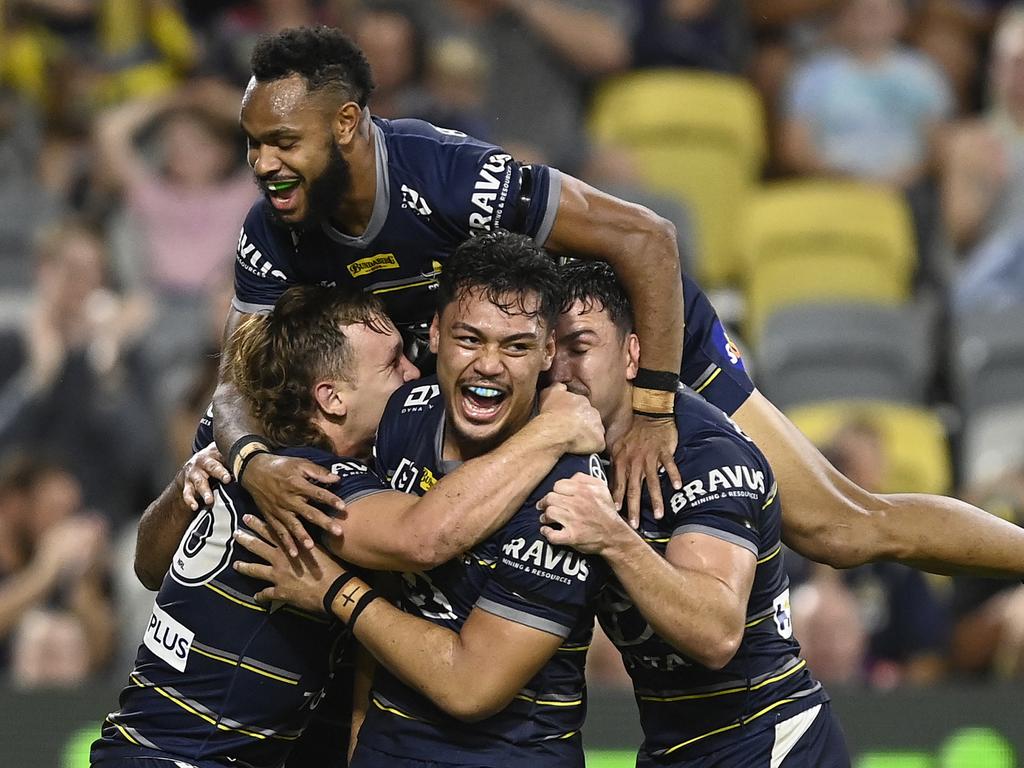 Jeremiah Nanai and his Cowboys teammates celebrate after scoring a try against the Melbourne Storm. Picture: Ian Hitchcock/Getty Images

The way the Cowboys played, in many ways broke some of the Golden rules of Rugby

League, such as establishing forward momentum before even considering pushing the

football toward the touchlines.

Last Saturday night North Queensland pushed the ball to the edges at every opportunity,

refusing to be drawn into a mid-field shoot out.

This totally disrupted the formation of the Storm defensive structure. It stretched the

Melbourne team, either making them vulnerable on the outside edges or through the middle

as a result of loosening the centre-field.

On one occasion in the first half, after a set of constant sideways movement, the dummy half

scooped the ball up, went back toward the posts and put Reece Robson through a gap and

over for a try. A result of the Storm’s defence being loosened.

On another occasion, just minutes after half time the Cowboys pushed the ball quickly to

their outside man on the right side. The Storm scrambled over to save a try in the corner.

With numbers gathered and the defence line shortened, the Cowboys, without hesitation, sent

All night they avoided what I believe to be one of the cardinal sins of attack, resetting the ball

into the middle of the field.

In days gone by it was described by the attack as a “settler.” The truth is all it does is settle

and reset the defence.

Too many ball players can be problematic. In the early rounds it was a big problem for the

Sydney Roosters. The playmakers getting in each other’s space.

But if every ballplayer has a clear understanding of their role, it can work beautifully as it

does in the Cowboys’ case. Halves Tom Dearden and Chad Townsend are bringing out the best in each other. Picture: Shae Beplate.

The numerous playmakers keeps the attack going, even if a (Tom) Dearden or (Chad) Townsend is taken out of play.

Scott Drinkwater is crucial in this. So is the relationship between Townsend and

Dearden. Before the season began my fear was both halves were too similar in style.

But Dearden has made slight adjustments to his game which makes the partnership work.

Rather than be a playmaker who can run the football a bit. His first instinct now is to run and

Townsend, the more experienced playmaker, controls where the attack goes.

The challenges just keep coming for the Cowboys, Friday night they take on the Premiers Penrith,

who are playing at their very peak.

In the last two weeks the Panthers have destroyed top quality opposition, putting on big

To add to the challenge, the game is at BlueBet Stadium Penrith, a ground where if the

When teams are in a rut you’ll hear the coach declare, “We just need to dig in, work harder

and things will turn around.”

A few weeks back the Raiders were on the road to nowhere. But it’s clear Ricky Stuart, rather

than wishing what they were doing would start working better, changed the formula.

competition. More importantly you can see the players are once again really enjoying

Salary cap breakdown: How much it costs to be a finals contenderIsaako reveals Walters’ snub in ugly Broncos exit

You gotta love what you’re doing.