Melbourne are in the final stages of negotiations with two of their superstars over long-term extensions, dealing a huge blow to the Dolphins. But there still a missing piece in the retention puzzle.

Besieged Melbourne have hit back at Wayne Bennett’s Dolphins with Jahrome Hughes to sign a lifetime deal and Harry Grant to become the NRL’s next $1 million player in a Storm super coup.

News Corp can reveal Grant and Hughes are in the final stages of negotiations that will see the dynamic duo ink long-term extensions to steer NRL heavyweights Melbourne through the post-Craig Bellamy era. 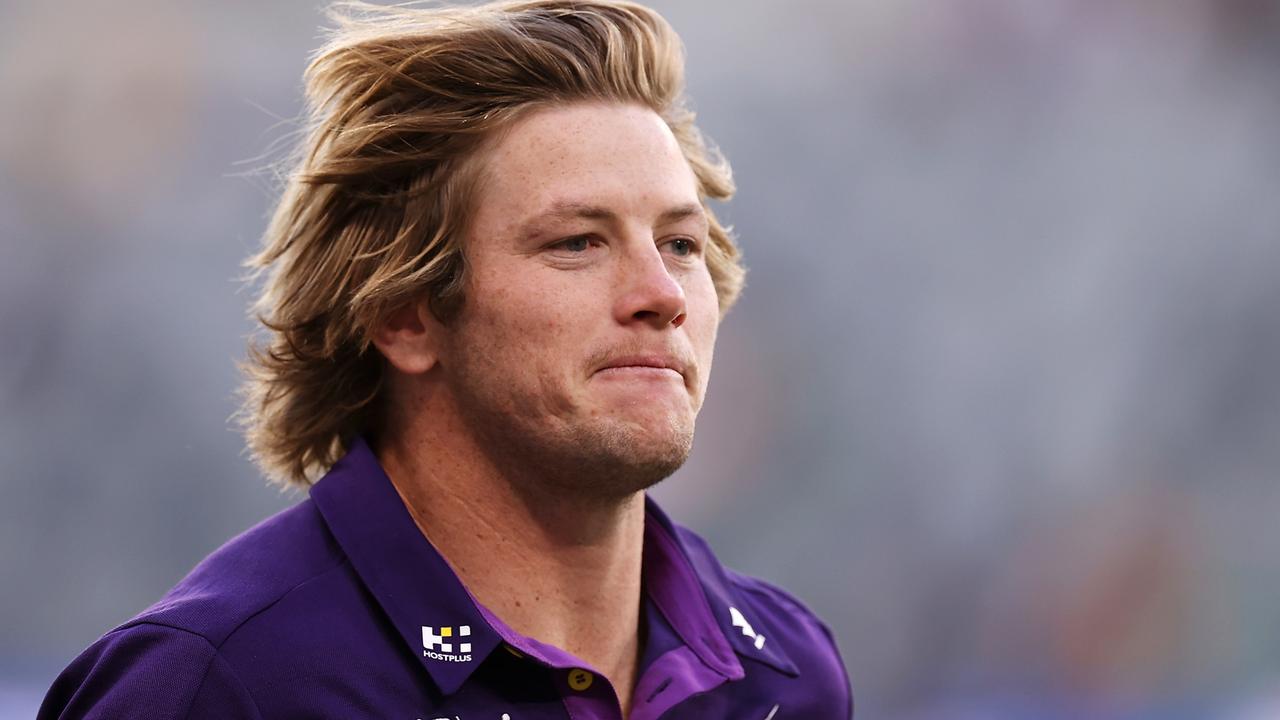 Harry Grant looks set to secure a deal of a lifetime with the Storm.

There were fears the Storm were going to be torn apart by the Dolphins, who had already signed Melbourne trio Jesse and Kenny Bromwich and Felise Kaufusi to spearhead their entry to the NRL in 2023.

The expansion newcomers had also formulated plans to lure Hughes and Grant to Queensland for the 2024 season and believed they had the funds under the salary cap to blow the Storm out of the water.

But the Storm have taken the fight to Bennett. Melbourne supremo Matt Tripp has upped the ante to ensure Grant and Hughes stay loyal by inking mega upgrades worth almost $9 million collectively.

Sources close to negotiations say Storm chiefs are putting the finishing touches on a deal to keep Grant at Melbourne until the end of 2026. The 24-year-old will be upgraded on his current contract for 2023, beefed-up by a multi-year package that will be worth $1 million annually with third-party arrangements.

Bennett was so keen to secure Grant the Dolphins recently increased their original offer, but Queensland’s fourth NRL team is resigned to the classy Rockhampton product staying in Melbourne.

The Storm, meanwhile, have agreed in principle to a six-year contract for Hughes.

Already contracted for the next two seasons, Hughes will be extended a further four years until the end of 2028. Jahrome Hughes could stay at the club until at least 2028.

The Storm have yet to finalise figures for Hughes, but the champion halfback is seeking $900,000-a-season, shy of the $1 million he could attract on the open market or as a marquee recruit at the Dolphins.

In total, Hughes’ six-year upgrade will be worth around $5 million and see the 27-year-old finish his career at the Storm beyond his 33rd birthday.

The Maroons five-eighth’s new manager Braith Anasta claimed on the NRL 360 program on Tuesday night that Melbourne had slapped a deadline on Munster, Grant and Hughes to make a call in the next 48 hours.

Tripp told News Corp there is no official deadline. He said Melbourne will not pressure the trio to pledge their futures, but the Grant and Hughes deals are so advanced they could be formalised in the next fortnight.

Bellamy is tipped to retire as head coach either this year or next and the retention of spine superstars Hughes, Grant and Papenhuyzen will ensure Melbourne are a force for most of the decade.

Tripp said he would not meekly raise the white flag and allow Bennett’s Dolphins to steal Melbourne’s playmaking stars. Will he or won’t he? Munster’s deal remains up in the air.

“I don’t know how much of a threat the Dolphins are,” he said.

“I’ve heard they are chasing Jahrome and Harry and that’s their prerogative, they can do what they have to do.

Bennett made no apologies for targeting Melbourne players given the Storm’s standing as the best NRL team of the past 20 years.

“Anybody who plays at Melbourne is on the hit list,” he said.

“I know what players I need to build a club and those Storm players (the Bromwich brothers and Kaufusi) fit that category, they build a club.

“It’s a very small market for the best players, so we have to make sure we stay calm and patient and make sure we don’t spend money on guys who can’t get the job done for us.”

Craig Bellamy’s Storm have hatched plans to keep their Big Three in Melbourne as part of an $8 million super deal that will represent one of the biggest retention packages in NRL history.

The Courier-Mail can reveal Melbourne have kicked-off negotiations with Queensland Origin duo Cameron Munster and Harry Grant and champion halfback Jahrome Hughes in the lead-up to Thursday night’s clash against Souths at AAMI Park.

Hughes’ management will arrive in Melbourne on game day to advance discussions on a club record six-year $5 million extension. The Storm have made a big play in a bid to retain in-demand halfback Jahrome Hughes. Picture: Getty

The Storm have been decimated in recent months with expansion newcomers the Dolphins poaching Jesse and Kenny Bromwich and Felise Kaufusi for 2023, while Kiwi Test star Brandon Smith will join the Sydney Roosters next season.

But the reigning minor premiers insist their playmaking spine will not be torn apart, with Storm chairman Matt Tripp making moves to keep Munster, Hughes and Grant in Melbourne for the long haul, having already signed Ryan Papenhuyzen to a $2 million extension to keep him at the club until the end of 2025.

Upgrading and extending the Big Three will collectively cost Melbourne in the vicinity of $8 million and rate as one of the most expensive retention drives of the past 25 years.

In 1996, Parramatta famously outlaid $7.8 million to poach Dean Pay, Jason Smith, Jim Dymock and Jarrod McCracken from arch rivals Canterbury during the Super League war, but the Storm’s mega deal would be in a league of its own.

Tripp confirmed he has begun talks on new individual deals for Munster, Hughes and Grant, but is mindful of not pressuring the Origin and Test stars as the Storm plan for life after Bellamy.

“Absolutely I would love to keep them all, but none of them have made up their mind as yet.

“Two of the guys have said let’s just park it for the moment so we can focus on footy, so my preference is to let them find their feet and get used to the idea of sewing them up long-term.

“They (Munster, Grant and Hughes) are all different players and people in their own right but they are bloody good mates.

“I’d love to sign all of them. I’m good mates with the guys, we catch up regularly and play golf, they have been fantastic for this club.

“I’m hopeful (of retaining the trio), rather than bullish at this stage.”

Melbourne hope to secure Hughes to a lifetime deal within the month.

The 27-year-old is contracted for another two seasons and is seeking a four-year extension worth around $900,000 annually, a total package of up to $3.6 million to remain in Melbourne until the end of 2028.

Munster, 28 in September, is off-contract next year and Melbourne are keen to sign the Queensland Origin pivot for a further two seasons in an extension valued at $1.6 million.

In October, the Storm exercised a mutual option for Grant to stay until the end of 2023. Now, mindful of a poaching threat from Wayne Bennett’s Dolphins, Melbourne are open to a three-year extension for Grant worth $2.7 million. The Storm are tempting Harry Grant to stay in Melbourne with a three-year deal. worth $2.7 million. Picture: Daniel Pockett/Getty Images

“This is the most important deal of Jahrome’s career so we want to make sure the terms are right,” said Bartlett of PSM.

“The bigger issue for Jahrome is more around the playing list rather than who the head coach will be.

“He wants to know the nucleus of the team and hope that himself, Munster and Grant will be there beyond 2023.

“If the Storm can keep those guys long-term, that would give Jahrome peace of mind that the Melbourne team will stay together for quite a few years.

“Jahrome is a team player, he has always been a one-in, all-in type of bloke. Keeping the side together is his priority and if the deal is right, he would love to stay in Melbourne and this deal would see him finish his career there.” 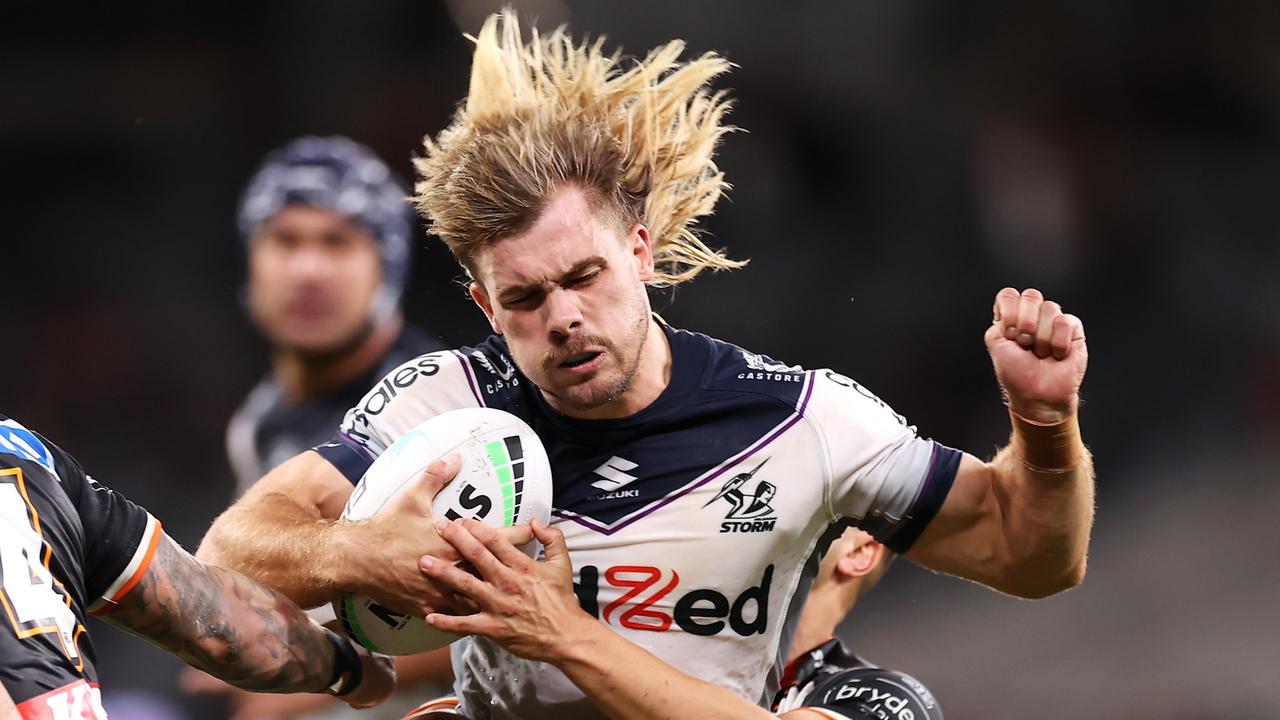 Ryan Papenhuyzen is locked in until the end of 2025. Picture: Mark Kolbe/Getty Images

The Dolphins have been linked with Munster, Grant and Hughes, but if Tripp gets his way, the triumvirate will finish their careers in Melbourne.

“I don’t know how much of a threat the Dolphins are,” he said.

“I’ve heard they are chasing Jahrome and Harry and that’s their prerogative, they can do what they have to do.

“We haven’t done anything formal yet, but they understand where I’m coming from.”