NRL 2022: All the Brisbane Broncos injury and team news ahead of round 15

Brisbane coach Kevin Walters insists Adam Reynolds is not a high-risk signing after the Broncos skipper’s latest injury saga saw him ruled out of Friday night’s blockbuster against Melbourne.

For the fourth time in just 16 weeks, Reynolds has been put on ice due to injury or illness, with Walters reluctant to roll the dice on his marquee $2.4 million recruit in the top-four showdown with the Storm at AAMI Park.

Reynolds damaged his ribs after being up-ended by Canberra rival Jamal Fogarty in last week’s gutsy 24-18 defeat of the Raiders and Broncos medicos were quick to downplay the injury, saying he was hoping to face the Storm.

But News Corp understands Reynolds, who failed to train with the main squad on Tuesday, could be facing two to four weeks on the sidelines.

Walters claims Reynolds’ ribs are “fractured” and is hoping the upcoming representative round, which will see the NRL season put on hold for a week, could buy enough time for his captain to return for the Cowboys derby in Townsville on July 2. “Adam won’t be playing this weekend, he is just too banged up in the ribs,” Walters said.

“We will give him this game off and then with another week off for rep round, hopefully he will be all right for the Cowboys game.

“I think his ribs are fractured or dislocated. There’s no point risking Adam at this stage of the season. He couldn’t finish last week’s game so we have to be smart about the welfare of our players and that’s what we’re doing with Adam.”

NRL TEAMS: FULL LISTS FOR ROUND 15

Reynolds, who turns 32 next month on the day of Brisbane’s round 17 clash against the Dragons on July 10, has endured a rollercoaster maiden season at Red Hill.

He missed the entire trial period with “general soreness”, had his round 1 grudge match against Souths wiped out after contracting Covid and was scratched from games against Newcastle and the Titans last month due to a groin injury.

Then, in his return from his groin complaint, Reynolds lasted just 59 minutes before leaving the field worse for wear after being crunched in a tackle by Fogarty.

The premiership-winning halfback has compiled 10 games in Broncos colours and Walters dismissed suggestions his main man is an injury hazard. “It’s not an age issue, I’m not concerned about his injuries at all,” Walters said. “In this instance, Adam’s ribs were in the wrong place and all the weight came down onto him.

“I said to Adam it’s good for our guys to learn and play without him sometimes and when he does come back in, he will add the polish and the finesse and the competitiveness that he brings.

“We haven’t seen the best of ‘Reyno’ yet, that’s the encouraging sign for later in the season as we head to the finals ... the fact that Adam has more improvement in him.”

In other team news, Kotoni Staggs (shoulder) returns and will have a new centre partner in Brenko Lee, who replaces the injured Herbie Farnworth (torn bicep).

Tyrone Roberts has been named to fill the Reynolds void. Origin duo Payne Haas and Pat Carrigan did not train on Tuesday, but the latter will face the Storm and the former will be given until game day to prove his fitness with a fresh shoulder injury.

“We’re going to give Payne every chance,” Walters said. “He and Pat are resting up with their Origin commitments, but Payne will train with us on Thursday and then we will make a decision on him.” 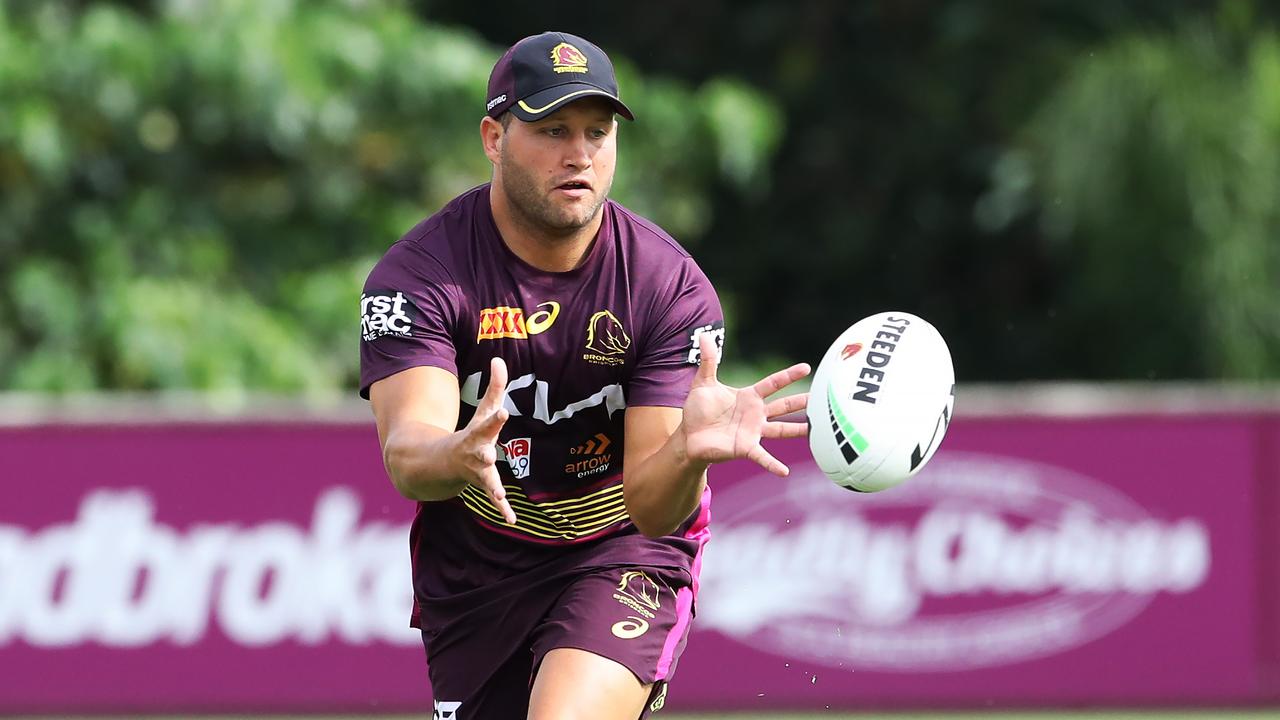 Tyrone Roberts will play halfback for the Broncos against Storm. Picture: Zak Simmonds

A rugby league journeyman who choked up with emotion talking about his move “home’’ to the Broncos might just find himself in the right place at the time … again.

As the unsettling forces of a massive injury toll swirled around him, Brenko Lee trained at centre for the Broncos on Monday and his reappearance this month after his own protracted injuries woes could be a godsend for the club.

Lee, 26, was raised in Logan City and used to travel to Suncorp to watch Darren Lockyer-led sides before starting his own NRL journey which saw him play with the Raiders, Bulldogs, Titans and Storm before the Broncos.

Earlier this season he chocked up with emotion at his first press conference for the club when talking about what it meant to him to play for the Broncos after watching them from close range as a child.

While he has never played more than 20 games for a club, his career does include two memorable highlights – winning a grand final with the Storm and a State of Origin series for Queensland in 2020. 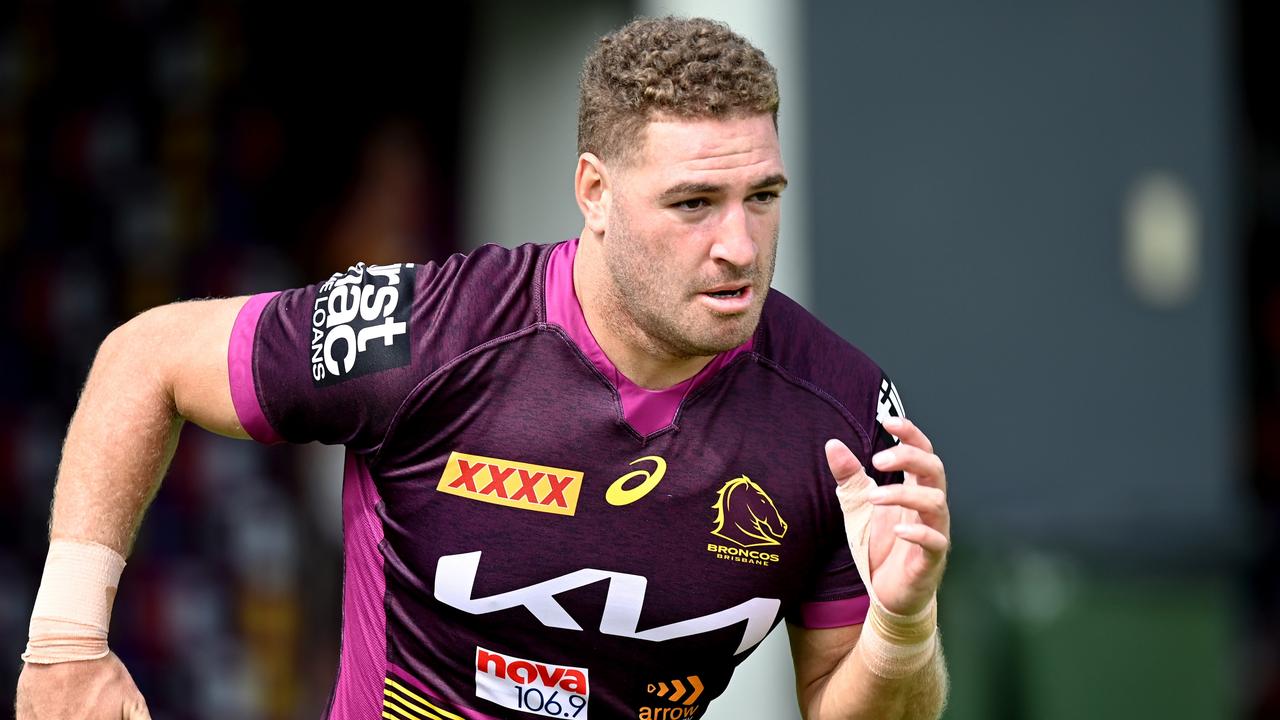 Lee played solidly for the Broncos in their gusty win over Canberra on Saturday, just his second game in two injury-ravaged seasons since winning the premiership.

“Last year I had a bad year because I kept tearing my calf,’’ Lee said after the Canberra win.

“This year I had a slow start. I am finally grateful I have the opportunity

“One thing about this club is that it does give you the opportunity but it is about taking the moment. Growing up in Logan you would come to games like this and see them do well when Lockyer was leading things. It fell off for a little bit but we are back in the top four.’’

With Herbie Farnworth out for the season with a torn biceps, Lee could find himself a key man in the Broncos’ surge to the finals, including Friday’s match in Melbourne against his old Storm mates.

Broncos coach Kevin Walters has been a fan of Lee’s for at least five years. During the inaugural series of Fox Sports Queenslanders Only in 2017, Walters consistently mentioned Lee as one to watch when he was talking about players of promise.

At least a third of the Broncos side took no part in the main training session with Adam Reynolds (rib), Payne Haas (shoulder) and Kotoni Staggs (shoulder) to be assessed on Tuesday before a squad is names for the Storm game.

Brisbane have a terrible record against the Storm and the bookies have written off their chances of an upset win on Friday with the TAB making them $7 outsiders, an extraordinary quote for a team which has just won seven matches in a row.

Brisbane have lost their last nine matches against the Storm and Walters faces the delicate challenge of trying to snap the hoodoo while not compromising the bigger picture of a finals finish in September.

Reynolds has said he is keen to play but may need an injection to soothe the pain on his damaged rib to do so.

Originally published as NRL 2022: All the Brisbane Broncos injury and team news ahead of round 15