NRL 2022: How Andrew McCullough is helping lead the Dragons next generation

Two old and two new. That’s how the Dragons’ spine will look this season and veteran hooker Andrew McCullough is confident the combination can yield results.

Two old heads will help usher in a new era at St George Illawarra as they lead two of the game’s most exciting prospects.

The Dragons will unveil a new-look spine to play the Warriors on Saturday, with teenagers Tyrell Sloan and Junior Amone joining veterans Andrew McCullough and Ben Hunt.

McCullough, at 32, is just six years younger than the combined ages of his teammates. But the Maroons hooker said he could not help but be excited by what the youngsters have shown in the pre-season.

“They have the excitement of playing NRL football and getting there and playing backyard footy,” McCullough said. “That rubs off on us older blokes. You go back to enjoying footy. You want to encourage them to play eyes-up footy and back their instincts.

“They need to play within the structure but it’s a balance with the younger guys. “Benny and I can help them with that. There’s a vibe but the evidence will be in results. That’s just the way the game is. (We want to get) the Dragons back to where they should be and repaying Hook (Anthony Griffin).”

Sloan and Amone had a taste of first grade last season – playing 16 combined games – but are now the first-choice options for a St George Illawarra side who desperately need to create more attacking opportunities.

McCullough, who is heading into his 14th season, said he had grown his leadership responsibilities.

“I’ve been in the group another year,” McCullough said. “I’ve been able to get to know everyone a bit better. The first part of my role is my own performance and then being able to help blokes along the way.

“Naturally that happens when you’ve been in a game for a while you know the ins and outs – the tough and good times. You have to set the standards at training and setting the bar really high to get the guys to achieve that.”

The Dragons’ round one clash against the Warriors on Saturday at Sunshine Coast Stadium will be the first time Hunt and Amone have teamed up as the starting halves in an official NRL game.

They did start together in the recent Charity Shield win over South Sydney in Mudgee, while Amone had three games at the end of last year in No.6 jumper when Hunt was sidelined with a broken arm (and Corey Norman was wearing the No.7). Talatau Amone is rated one of the game’s most exciting emerging stars.

All up Amone played 11 NRL games during his rookie season and it was actually Hunt who put him over for his first try against the Bulldogs.

But after spending the summer preparing to go forward with his halves partner following Norman’s exit, Hunt says he’s been super impressed with what he’s seen from a player rated one of the game’s most exciting emerging stars.

“He is a real talent, Junior,” the veteran playmaker said about his new teenage sidekick.

“He is still very raw and learning the game.

“But you can just see that he has got that genuine talent and knows how to read a defensive line and when to get the ball and take them on.

“I think we can do some really good things to get him involved this year and he can be dangerous.”

Amone’s talent even sparked the interest of Wayne Bennett recently with the Dolphins said to be sniffing around to see if he might become available. 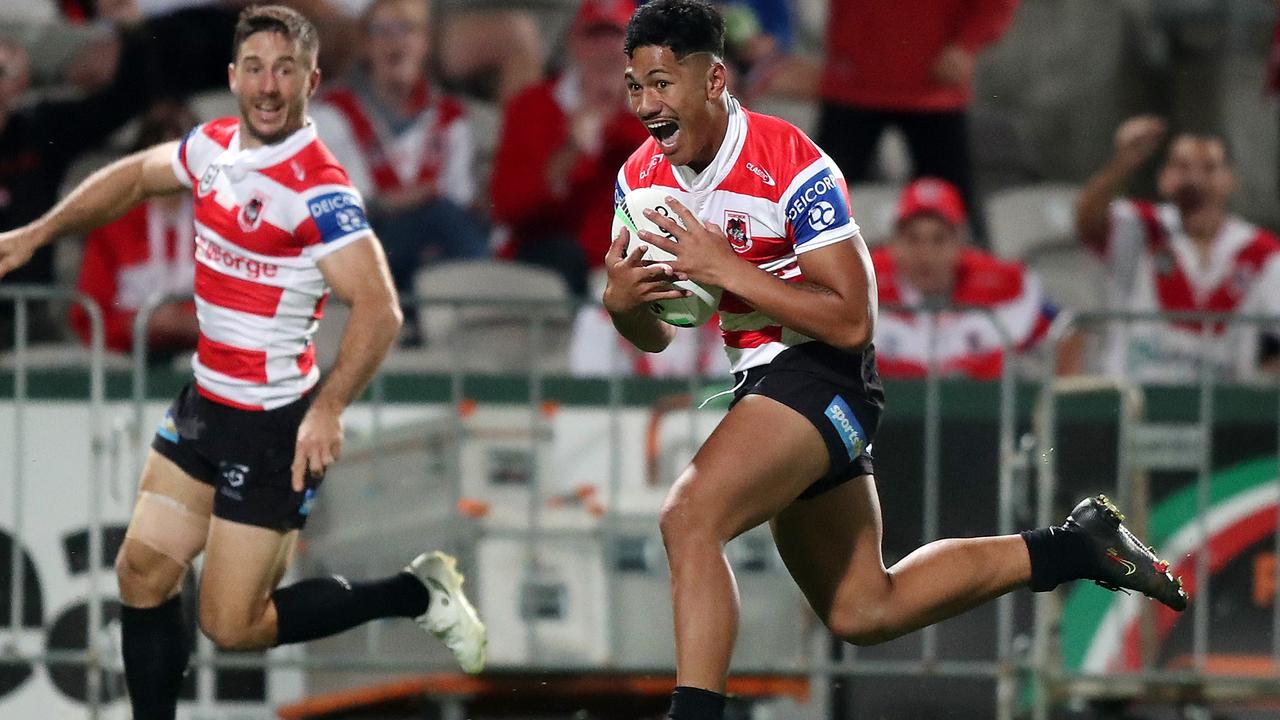 Amone has been labelled as ‘dangerous’ and could be a key factor in the Dragons’ drive to finals.

Though you’d imagine the Dragons would have no intention of letting Amone walk out the door with the club on the cusp of what could be their most exciting period in a decade with a backline overflowing with young talent.

There is just so much anticipation about the likes of Amone, Sullivan, Tyrell Sloan, the Feagai brothers and Cody Ramsey, along with what looks a tremendous centre combination of Zac Lomax and Moses Suli.

But Hunt reckons the key to their success this season hinges on the battled hardened pack coach Anthony Griffin has put together, with the likes of Aaron Woods, Francis Molo, Jaydn Su’A and Tom Burgess adding great experience and depth.

“With the experience that Hook has brought in with the forwards and the youth in the backs and those young guys, there is definitely a feel in the place that we are going in the right direction and we can do some good stuff this year.”

And while the bookies have the Dragons as $6 third favourites for the wooden spoon behind only the Tigers and Cowboys, Hunt says top eight is a realistic expectation.

“I have definitely got the belief that we will (make the right),” he said.

“I think it is there.

“We have got plenty of strike and as long as we can defend really well which we have been working hard on, I think we are a chance.”

Originally published as NRL 2022: How Andrew McCullough is helping lead the Dragons next generation