Dolphins coach Wayne Bennett has made it clear money will prove no barrier in his pursuit of the game’s biggest stars.

Wayne Bennett has put out the welcome mat to Cowboys superstar Jason Taumalolo as the Dolphins coach revealed he has held talks with Kalyn Ponga and is ready to splash the cash to poach the Queensland Origin ace.

On the day the Dolphins launched their membership drive for 2023, a bullish Bennett outlined his plan to sign the code’s elite stars, opening the door for Taumalolo and Ponga to spearhead the NRL’s 17th team for their foundation season.

Cowboys coach Todd Payten has been buffeted by claims he is at loggerheads with Taumalolo, with Broncos legend Corey Parker recently calling for North Queensland to cut their losses and release the star lock midway through his $10 million deal.

The Cowboys insist they have no plans to offload Taumalolo, but situations change quickly in rugby league’s volatile player market and Bennett said he would relish any opportunity to mentor the 2016 Dally M champion.

“If he (Taumalolo) comes off-contract, we would certainly be interested in him,” Bennett said.

“Jason is a wonderful player and has been good for a long time. He has done a great job as captain of Tonga so he is highly credentialled.” Bennett is equally excited about the prospect of joining forces with Ponga as pressure builds on the Dolphins to land a big-name playmaker after signing forwards Jesse and Kenny Bromwich, Felise Kaufusi and Mark Nicholls.

News Corp can reveal Bennett has held discussions with Ponga’s father Andre, who last month claimed Newcastle were in the box seat to retain him after the Knights hired Andrew Johns to mentor the Maroons maestro.

Ponga himself recently indicated he is happy at the Knights, but until he formally activates an extension for the 2023 season, Bennett will remain in the fight for his signature.

It is understood the Dolphins would have to pay at least $1.2 million a season to snare Ponga.

The Dolphins’ pursuit of Ponga is in a holding pattern. Bennett will not table a formal until Ponga provides assurances he is serious about considering a move to the Dolphins, but the super coach says the expansion rivals are not deterred by the Knights sensation’s price tag. 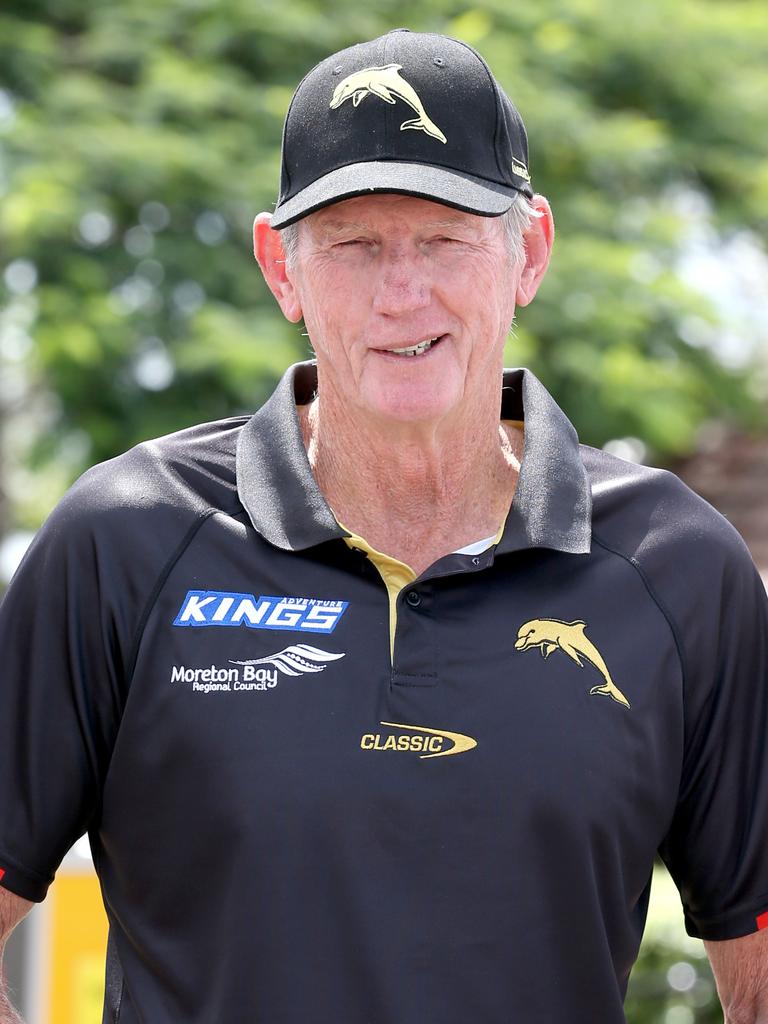 “You have to be able to afford those sorts of guys,” Bennett said when asked if he could afford Ponga.

“But we can’t afford 10 of them. I’m sure if we find ourselves in the market for him (Ponga), we would be able to afford him.

“We’re out there talking to a lot of people, there’s a lot of interest out there.

“We’re very flexible at the moment, we keep coming back to the word ‘best’.

“If we have to wait 12 months to get that type of player (such as Ponga or Storm halfback Jahrome Hughes), then we will wait 12 months.

Bennett also confirmed his interest in former Storm flyer Suliasi Vunivalu, who is a free agent at season’s end after a frustrating code defection with rugby’s Queensland Reds.

“He (Vunivalu) was a tremendous player in rugby league so if he wants to come back, I would be open to suggestions,” the former Broncos coach said.

“I would love to have him, but I don’t know what his position is.”

The Dolphins have just another seven months to sign more than 20 players to complete their inaugural 30-man squad, but Bennett isn’t hitting the panic button.

“There’s no new signings to announce today, but hopefully soon because we need more players than we’ve got,” he said. “I just want you to understand, there are 16 other clubs out there competing and what are they competing for - the best players in the game.

“If we want to go and sign the second and third-best players in the game, we won’t have a problem filling a roster, it would be finished next weekend. But we are looking for the best players and those clubs with the best players are doing everything they can to hang onto them and other clubs that don’t have them are trying to get them as well.

“It’s a very small market. So we have to make sure we stay calm and patient and make sure we don’t spend money on guys who can’t get the job done for us.”

The Dolphins’ foundation membership drive has got off to a shaky start after the NRL expansion club’s website crashed.

The NRL’s 17th club will enter the competition next year and is now accepting its first lot of members.

But a slick marketing campaign and lengthy promotion went up in smoke on Wednesday afternoon when the Dolphins’ website couldn’t cope with an influx of traffic from prospective fans. “Hi everyone - we are having difficulties given the overwhelming traffic and are working on a solution as quickly as we can,” the Dolphins tweeted.

“We appreciate your patience - stay tuned!”

The Dolphins engaged renowned poet Rupert McCall to write a poem about their NRL launch and filmed a slick promotional video at Suncorp Stadium.

Coach Wayne Bennett and CEO Terry Reader addressed the issue at a press conference in Brisbane on Wednesday afternoon to spruik the membership drive.

Bennett laughed off suggestions his relatives were rushing to buy memberships.

“I can’t even find a website myself,” Bennett said with a wry smirk.

Reader said the website crash was an indication of the booming interest in the NRL’s 17th team.

“We would prefer the website didn’t crash but it just shows you the interest in the Dolphins,” he said.

“We had people lining up at the leagues club today before midday trying to get their memberships which shows how ready Brisbane is for a second team. We have a big city and the people here love their rugby league and they can’t wait to get behind us. “We did substantial testing yesterday to see if we could deal with the overload so it’s a wonderful sign. It’s not ideal, we would prefer people buying straight away, but the website will be back and up and running.

“The website will be fixed and it goes to show the interest and excitement.”

The Broncos and Souths are two of the NRL’s heavyweights with members in excess of 30,000 and Reader is confident the Dolphins can reach that figure.

“The answer to that (number of Dolphins members) will be known in the next few weeks and months,” he said.

“From a starting point, we are over the moon with the interest. We have 45,000 leagues club members so we’re looking to make sure we can mix it with the biggest membership clubs in the NRL.”

But that mark could take some time after the rocky lead-up to their 2023 launch.