The Titans insist they still want to win two NRL premierships by 2030 as captain Tino Fa’asuamaleaui reaffirms his desire to transform the Gold Coast’s losing culture.

Origin star Tino Fa’asuamaleaui insists he won’t quit the Titans and wants to turn around the Gold Coast’s losing culture as CEO Steve Mitchell declared the club’s dual-premiership dream was still on track.

The Titans will head into Saturday’s clash with Cronulla at Coffs Harbour sitting in last spot on the NRL ladder following a disastrous first half of the 2022 season.

With only three wins from 14 games, the Titans have slumped below the battling Bulldogs and are the only current bottom four club that hasn’t sacked their coach this year.

A fifth straight loss would intensify pressure on coach Justin Holbrook, who went into this season hoping to improve on last year’s drought-breaking finals appearance.

With the play-offs all but gone, the Titans are now fighting to avoid collecting a second wooden spoon in four seasons following the 2019 debacle under ex-coach Garth Brennan. Tino Fa’asuamaleaui is determined to turn the Titans’ fortunes around on the field. Picture: Chris Hyde/Getty Images

Maroons prop Fa’asuamaleaui has been a rare shining light for the Titans this year, continuing his rise as one of the NRL’s top forwards with consistently excellent performances.

Fa’asuamaleaui, 22, had an 85 per cent winning record at Melbourne (23 wins from 27 games) and won an NRL premiership in his second season, but has enjoyed success just 37 per cent (13 wins from 35 games) of the time since joining the Titans last season.

He knocked back a lucrative offer from Wayne Bennett’s Dolphins to remain at the Titans until at least 2024 and said he was committed to turning the club into a winning franchise.

“It was rare to lose at Melbourne,” Fa’asuamaleaui said. “When I saw Storm lost twice in a row recently, I can’t remember that happening when I was there.

“It’s a bit strange coming from Storm, but these are the bad times where we have to learn and make sure we really take it in.

“I hate losing. Anyone who plays footy should hate it too. That’s something I really want to change at the club. 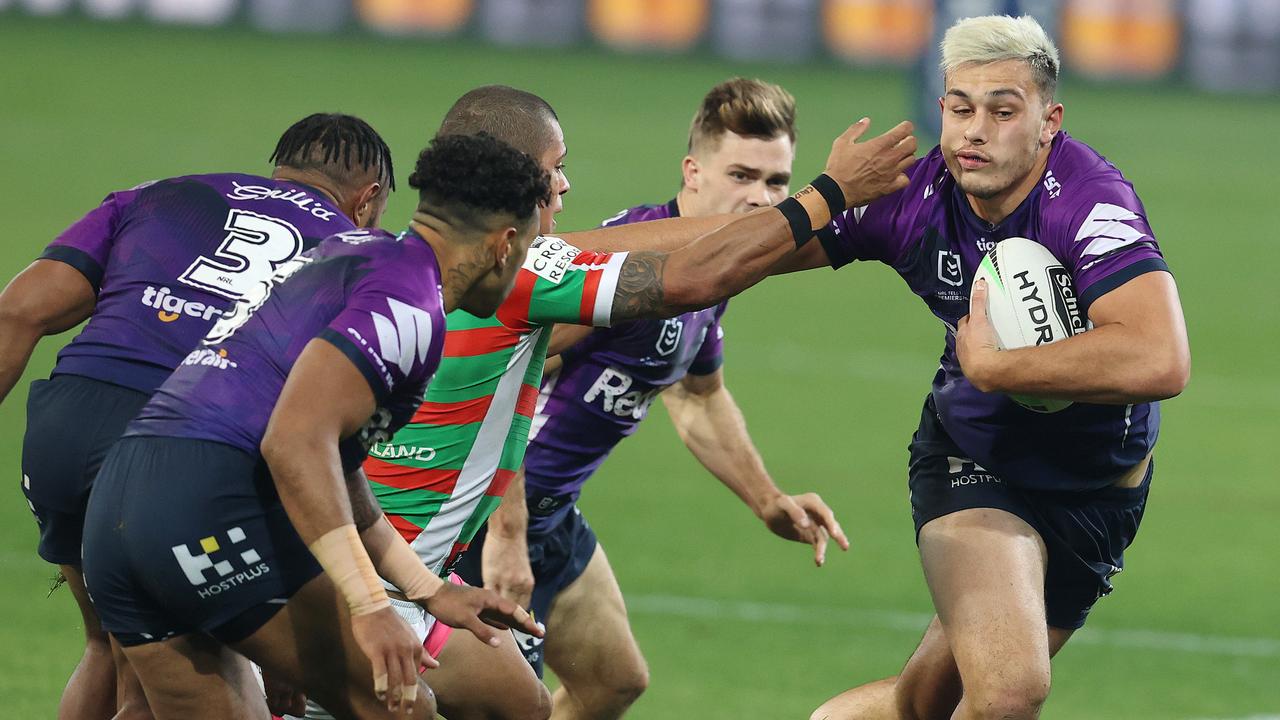 “Hopefully in the future we are like the Storm and the losses don’t happen as often. That’s why I’m at the Titans for a long time. I really want to be the one that changes that.

“I signed at the Titans for a long time because I want to be the one that changes that (losing culture). That’s what I am really motivated about. Hopefully we can work hard enough so that in the future it doesn’t happen.”

After playing finals last year with a 10-14 record, the Titans boldly declared they wanted to win two premierships by 2030.

That dream appears to have gone off course, but Mitchell insisted the goalposts haven’t shifted for the wooden spoon contenders.

“We are well below expectations,” he said. “Our purpose is to make our community proud and at the moment we’re not doing that. We need to be honest.

“The club across the board is well-positioned. The NRLW program is very strong, our diversification of the business through netball and our commercial aspects is really strong. “Our NRL program needs to improve. We’ve got some work to do there.

“That road map to 2030 is firm in the ground. That’s the strategic plan we’re working to.

“Two premierships between now and 2030 is our absolute intent. It’s the same with the NRLW program. Our aspirations strategically and on paddock haven’t changed one ilk and they won’t. That is what we’re working to.”

Despite losing nine of their past 10 games, Holbrook has resisted making mass changes heading into the Sharks game. Mitchell said the team needed to improve its mental resolve and follow Fa’asuamaleaui’s lead.

“We need to see an improvement in our effort on the paddock, our desire and mental rigour,” he said. “We are really strong in patches of games then we have these moments where we’re not.

“We want to see consistency across the 80 minutes in effort and mental rigour. If our group played with the same intentions as our captain played with in regards to effort we’d be in a pretty good place.

“Mental resolve is what we’re looking for.”