With Michael Maguire sacked and finals aspirations gone, there were calls for Adam Doueihi to miss the rest of 2022. But the Wests Tigers star refuses to write off the season.

Adam Doueihi could have sat out the rest of the season.

With the Tigers’ finals aspirations gone and Michael Maguire already out the door, there was a thought that Doueihi remain sidelined to aid his recovery from a second knee reconstruction.

But the 23-year-old many tip to be the Tigers’ long-term skipper quickly quashed any suggestions he was about to write off the rest of the year.

“It was obviously a conversation and people have mentioned it, but I definitely didn’t want to take the whole season off,” Doueihi said. “It wasn’t right for me nor the club.

“I’m here to play footy and do my job. I’m sick of training. I’m not a good observer of footy. I’m really glad to be back.” 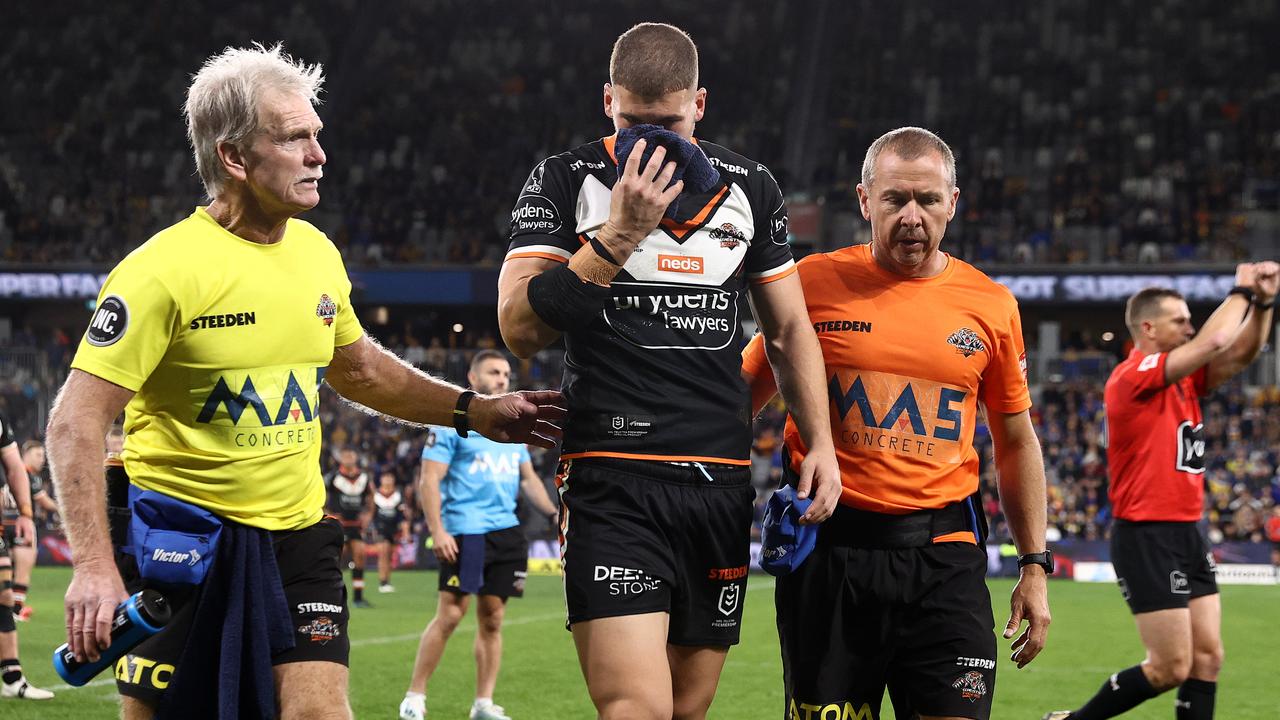 Adam Doueihi reveals there were conversations about him potentially sitting out the entire 2022 season as he prepares for a return from an ACL injury. Picture: Getty Images

Doueihi makes his comeback against Canterbury on Sunday having last played for the Tigers on August 21. With the NRL on pause next week because of the representative round, he could have easily delayed his return.

But a conversation with interim coach Brett Kimmorley fast-tracked the comeback.

“I’ve been cleared by all the medical people, but myself, Tim, Noddy (Brett), even Madge (Maguire) when he was here, we sat down and thought we’re better off taking a few extra weeks,” Doueihi said. “The more weeks you leave the graft, the more it heals.

“We sat down after the game (on Sunday) and Noddy asked if I wanted to play, so I put my hand up. I was keen to play.

“I don’t think it’s all over if you have a third one but you definitely don’t want to be having three (reconstructions).”

His return off the bench is expected to be limited to about 15 minutes, with Doueihi planning on slotting into the backline.

Long-term though he has his eyes firmly on the No.6 jersey.

It could be Kimmorley’s first test as a coach trying to workout how to fit Doueihi and incumbent halves Luke Brooks and Jackson Hastings into two spots.

“Brooksy and Jacko are there now and formed a good combination and know each other’s games. I’m only focused on getting through this weekend unscathed and giving myself more confidence [in the knee].

“I’ve had no conversations with Noddy about where I’ll play after this weekend.” Adam Doueihi will make his return from the bench in Round 15. Picture: NRL Photos

Doueihi was close with Maguire, who signed him at South Sydney before bringing him across to the Tigers and conceded it was “sad” to see Maguire moved on.

Free to sign with rival clubs come November 1, he insists he is in no hurry despite the Tigers wanting to get a deal done.

“I haven’t looked into it,” Doueihi said. “There is no real rush. I want to show the club that I can play good footy. It’s in the back of my mind. Maybe closer towards the end of the year it’s something I will think about.

“You never tap out on your teammates or throw the white flag. I love the club. When I first signed here I said I wanted to bring success and we haven’t done it yet. I’m happy here and I want to bring some success.”