Latrell Mitchell knows he needs to tame his inner ‘beast’ and says he already has the blueprint to finding the balance that he requires.

Returning South Sydney superstar Latrell Mitchell has opened up about the perils of controlling his “inner-beast” as the rugby league world prepares for his first NRL game in seven months.

In a remarkable interview with Fox Sports, Mitchell also reveals plans for a season-long booze ban while claiming he “couldn’t be more apologetic” to Joey Manu – the Roosters player he smashed in round 24 last year to incur a six-week suspension.

And Mitchell admitted Manu’s Roosters will be “headhunting” him in next Friday night’s massive grudge match.

Stream every game of every round of the 2022 NRL Telstra Premiership Season Live & Ad-Break Free In Play on Kayo. New to Kayo? Try 14-days free now.

In an honest concession, Mitchell said he had enormous difficulties overseeing his on-field aggression, describing it as “the beast.”

“It’s more like the beast. I’ve got to control the beast. That’s the challenge I’ve got at the moment that I’m facing,” said Mitchell, who makes a much-hyped comeback in Thursday night’s big match against Melbourne at AAMI Park. 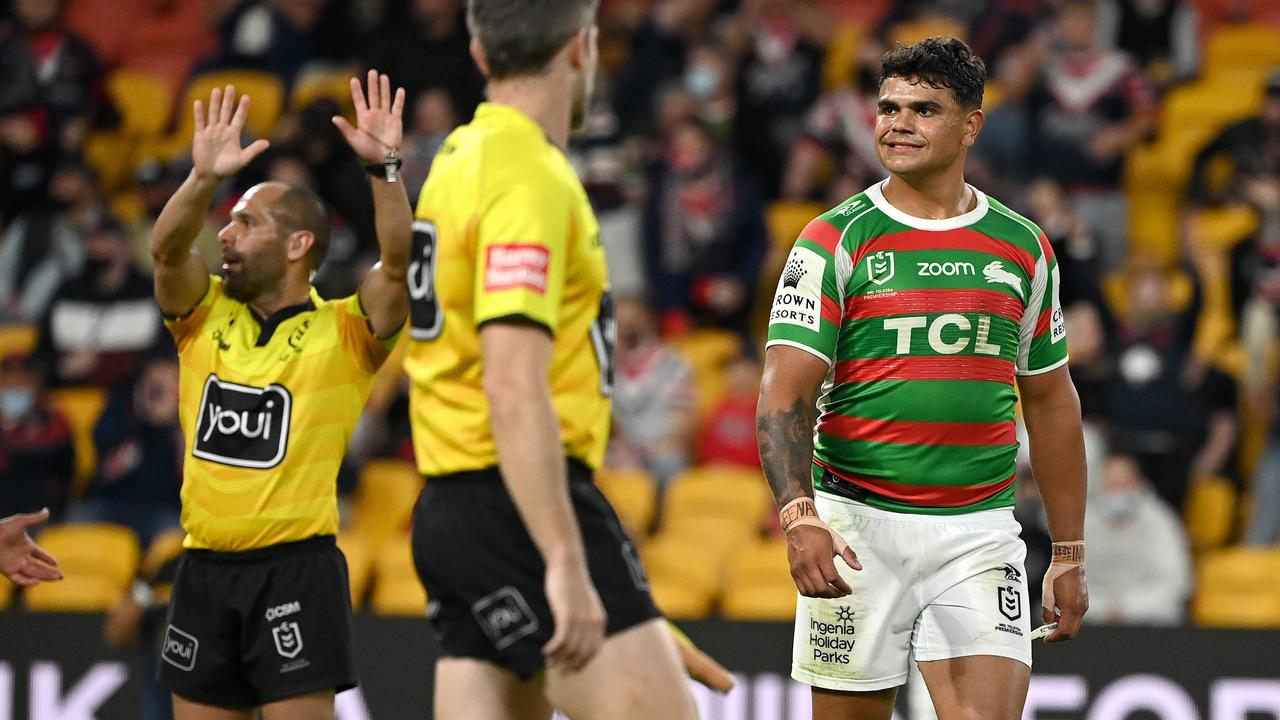 Latrell Mitchell cost Souths big time last year when he was suspended for a high shot on Joey Manu.

“Every time I get on the field I feel like I have got to go hard, tackle someone hard. It’s just controlling him.

“It’s freaky to talk about but I feel when I get to a point that I can’t control him and I’ve just got to play footy. But I’ve reflected and got to bring him out when I need him.

“I think that Origin period is probably the best time I can channel him the best. That’s where I have to take that ‘Origin Latrell’ and bring him back to club level and be able to do that on a consistent level. It’s about controlling it.

“I’m not gonna change for no one. I’ve got this far. No one was complaining three years ago when I was playing.

“I’ve got every intent to go out and play the game the way I still do, and as passionately as I still do and wear my heart on my sleeve.”

Mitchell’s illegal collision with Manu became the most controversial moment of 2021. Latrell Mitchell wants to bring his Origin form back to club level at the Rabbitohs. Chris Hyde/Getty Images

The Rabbitohs champion claims to have made peace with Manu despite simmering tension between the two clubs, who clash in round three at Accor Stadium.

“I haven’t even thought about it,” Mitchell said. “I know there’ll be headhunting, but that’s the game. I’ll be running straight. We’re good. I gave him a message.

“I didn’t really trust too many people to talk about Joey. That’s why I haven’t really come out and said anything. I couldn’t be more apologetic.

“I love him. He’s my brother. I don’t want to hurt my mates but that’s the game, split-second things happen. I can’t control what happened in the past but I can control what is ahead and in the present.

“But I have to play the game the way I play it. He knows that and understands that. I’ll never change. But I’m definitely apologetic about what happened. It’s a better game with Latrell and Joey in it. Great players have to be in the game. That’s why fans pay to sit in their seats.” Joey Manu’s season was over after he was crunched by Latrell Mitchell in round 24 last year. Picture: NRL Photos

The Manu hit and subsequent suspension prompted Mitchell to temporarily lose interest in football and implemented a self-imposed alcohol ban.

“I’ve never been great in the off-season but I got a bit slack there and wasn’t too interested in coming back and doing anything,” Mitchell said. “But I flicked it around from New Year’s onwards and I really looked at myself and where I needed to be.

“I got off most stuff you shouldn’t be doing as a rugby league player like alcohol. I’ve been nine weeks ‘off it’ and I’m feeling as fresh as I ever have. I don’t mind a beer but it’s been the best for me. I’ve been thinking a lot clearer.

“I know my job now and I think my emotions recognise it when I come to a point when I’m feeling a bit anxious or angry, I take a breath. I’m really practising that. It won’t come overnight but I am really working hard on myself.”

Asked whether he would continue his booze ban for the entire season, Mitchell said: “Yeah, I’m going to try, I’m going to do it. It’s been good. I’ve been really enjoying it. I wake up fresher, as you do; more time with the kids. I’ve wasted enough time having fun with the boys. I’m 25 this year.”

Mitchell has been accused through the off-season of suffering anger issues.

“It’s been an eventful few months,” he said. “The off-season was something to reflect on. I wasn’t doing too well there at the time after what happened. But look, I reflected on what happened and myself, and what needed to be done.

“I’m back better now and I’m in a great head space, the best I’ve ever been. I’m excited to get back. I was champing at the bit last week to get back and I can’t wait for this week and put a smile on my face. “I owe my teammates a bit — to come back and have a good season, stay on the field and do my job to the best of my ability.

“I love the game and I play passionately. Good or bad, it’s all good for me. I try and channel that into the way I play rugby league. I play hard and fast I guess, that’s the way I love it. I hope the fans are ready and I can’t wait to get back and out on a couple of shows.”
During the exclusive interview, Mitchell spoke about the pain of missing last year’s grand final.

“I’m not a great spectator. I want to do what I do best and that’s being on the field playing footy,” he said. “To miss that was pretty heartbreaking.

“Setbacks, I learned from my failures. I don’t look at them as negative, more I’ve got to work on myself as a player and as a person.

“I’m to a point now when I’m getting a bit older, a bit wiser I guess. I have to focus on what’s my job and stop being selfish, in a way, and put everything into the team. I owe the boys a lot.”

^ Watch the full interview with Latrell Mitchell on Fox League from 7pm on Thursday as part of the pre-game coverage on Foxtel and Kayo.

Mitchell is finally back from a six-game suspension — incurred for a high shot on Roosters star Joey Manu in round 24 last year — for Thursday night’s big match against Melbourne at AAMI Park.

While telling Mitchell to be careful with his physicality, Daley said the Rabbitohs champion had to play his natural, vigorous game.

“Latrell can’t be thinking about anything other than what makes Latrell play his best football – be aggressive with the ball, aggressive when he tackles. He knows what works for him,” said Daley, who coached Mitchell in the Indigenous All Stars side. “He has to stick to that and not worry about anything else. That’s just who he is. That’s just how he plays. He should come back and play the way he always plays.

“Obviously you have to be careful. If you play with aggression and get it wrong then you can pay a price, as he did last year.

“Latrell knows what works for him and he knows what gets him into the game and we have seen how dominant he can be. When he’s physical, that’s when he’s at his best.

“The big thing will be not trying to overplay his hand and just do what he normally does. Latrell will give everybody else confidence and will make a massive difference to everyone in that team.”

After a shock round-one loss to Brisbane, Demetriou is desperate for Mitchell to add some power to his side.

“I want his passion. I want him out there, I want him loving being out there with his South Sydney jersey on,” Demetriou said.

“It’s more about playing the game in his head before we get there and he turns up fatigued because he has been that excited all week. It’s about getting him fired up and ready to go at the right time.

“Having Latrell back makes a big difference. He’s been itching to go for weeks. It’s probably (about) calming him down a little bit before the game. “I’m stoked to have Latrell in our team. He brings so much on the field but off the field as well. I think he (halfback Lachlan Ilias) doesn’t change but the opportunities he sees will. Latrell is a player who attracts attention, there’s no doubt about that.

“Whatever side of the ruck he is, there are opportunities to play on both sides. That helps Cody (Walker) and ‘Lachie’ but can also help (dummy half) Damien Cook as well. You can see the difference he makes to the flow in our attack.”

“What sometimes gets lost with Latrell with all the discussion about his aggression and physicality is just how skilful he is,” Solly said. “He is one of, if not the, most skilful and athletic players in the game and every fan - particularly Rabbitohs fans and members - will welcome watching that skill level.

“The key to any rugby league game is physical but most fans turn on their TV or go to the game to watch players of Latrell’s extraordinary skill do their thing. Hopefully we get to see the best of those skills on Thursday night in Melbourne.”

When quizzed about Mitchell’s return, Storm five-eighth Cameron Munster said: “He will bring a lot of energy and aggression, he‘s going to be a force, especially being his first game back from last year, and he’s going to want to make a point.”