Almost a third of the Bulldogs’ top 30 could part ways with the club at the end of the season. Find out who’s in the firing line as the NRL cellar dwellers prepare for a major cleanout.

Almost a third of Canterbury’s top 30, including new arrivals Matt Dufty and Paul Vaughan, could part ways with the club at the end of the season as coach Trent Barrett mulls a surprise positional switch for Josh Addo-Carr.

The Bulldogs are in the midst of another cleanout, with Dufty and Vaughan set to be the highest-profile departures in the wake of Canterbury’s poor start to the year.

The duo headline a list of players who may be headed for the exit door.

Canterbury’s roster reshape is in full swing with the shake-up including:

● Dufty and Vaughan set to move to the Super League. Warrington are closing in on Dufty while Vaughan has been linked to Wigan. The Raiders rejected a potential homecoming for Vaughan next season. Matt Dufty has struggled for form at the Bulldogs. Picture: Bradley Kanaris/Getty Images

● Tevita Pangai Jnr has already come on the radar of several clubs, despite arriving at Belmore only this season.
● The likes of Joe Stimson and Brandon Wakeham are unlikely to be offered new deals.
● In-form hooker Jeremy Marshall-King has an option in his favour he needs to activate before June 30. Interest from the Dolphins, Dragons and Warriors mean he is unlikely to take up the deal. Injured forward Jack Hetherington has a mutual option.
● Speculation continues surrounding the futures of Kyle Flanagan and Luke Thompson, despite the pair being contracted next season.

● Maroons player Corey Allen has not been seen in first grade this year and has a year left on a $500,000 contract — on a similar deal to star teammates Addo-Carr and Matt Burton – and has been struggling with injury.

● The club wants to see how back-rowers Matt Doorey and Raymond Faitala-Mariner return from injuries before deciding if they will remain at the club. Faitala-Mariner (foot) could take his spot on the field for the first time since round two last year this week while Doorey (knee) is still a month away.

“They have shown an interest in him,” Schifcofske said. “We have had a couple of chats. He’s having a look at it. He would be enormous over there.”

The Bulldogs have added star quality to their roster next season with the impending arrivals of forward Ryan Sutton, Viliame Kikau and Reed Mahoney. In the midst of their roster upheaval, the Bulldogs are considering moving representative winger Addo-Carr from the flank to fullback in a bid to try to spark the team’s attack ahead of their clash against Wests Tigers on Friday.

Dufty’s performance last Friday night has again come under fire and the Bulldogs are looking for a way to try to get their prized recruit in Addo-Carr more opportunities with the football.

Addo-Carr wanted a shot to play in the No.1 jersey when he first spoke with the Bulldogs about making the move from Melbourne last year.

Despite conjecture at the time, there was no fullback clause in Addo-Carr’s deal nor any financial triggers in his $550,000 contract for playing at the back.

The Bulldogs slumped to last on the premiership ladder after their 16-6 defeat to Newcastle. Canterbury have won just five matches since Barrett took control last year. Liam Martin could be headed to the open market after the premiership-winning forward knocked back a first-up offer from the Panthers.

In a blow that will force Penrith to rethink how they spend their salary cap, Martin has turned down the club’s first attempt to extend his contract beyond 2023.

The Daily Telegraph has been told the Panthers last week offered the edge forward a deal that was well short of his estimated market value, which could be as high as $750,000.

There will be no shortage of clubs willing to talk to the no-nonsense forward should he remain unsigned after the November 1 anti-tampering deadline passes.

Hailing from Temora in the Riverina region of NSW, Martin has been in the Panthers’ system since moving to Penrith as a teenager to play SG Ball. Bursting on to the NRL scene in 2019, Martin confirmed himself as a star last year when he was selected to make his State of Origin debut for NSW.

The Panthers are hopeful of retaining Martin but they will need to come back with a better offer after the initial knock-back.

The club’s second-row stocks are already taking a hit from next year, with excitement machine Viliame Kikau already moving to the Bulldogs on a big-money deal.

That loss will be offset by the recruitment of Tigers backrower Luke Garner, who was last week announced as a 2023 signing for the premiers, who have lost just one match so far this season.

Veteran prop James Tamou believes he can still “match it with the top players” and wants to play on next season at Wests Tigers.

The premiership winner considered retirement in the off-season after undergoing ankle surgery but told The Daily Telegraph his body is still up to the rigours of the NRL.

After joining the club in 2021, Tamou is without a contract for next season but said the Tigers are a genuine ­option beyond this year.

“Absolutely, 100 per cent with the connections I have made here, ” Tamou said. “But players come and go and you never know where you end up.

“Everything was on the table back in the off-season, including retirement, thinking about the kids and the family. At the moment, the body feels good, physically I’m fine.

“I feel like I’m still up to it, to compete with the top players.

“If at any point I look at my game and think I’m a bit behind the eight ball, I’ll think about retirement. But at the moment, I think I can still compete each week.” 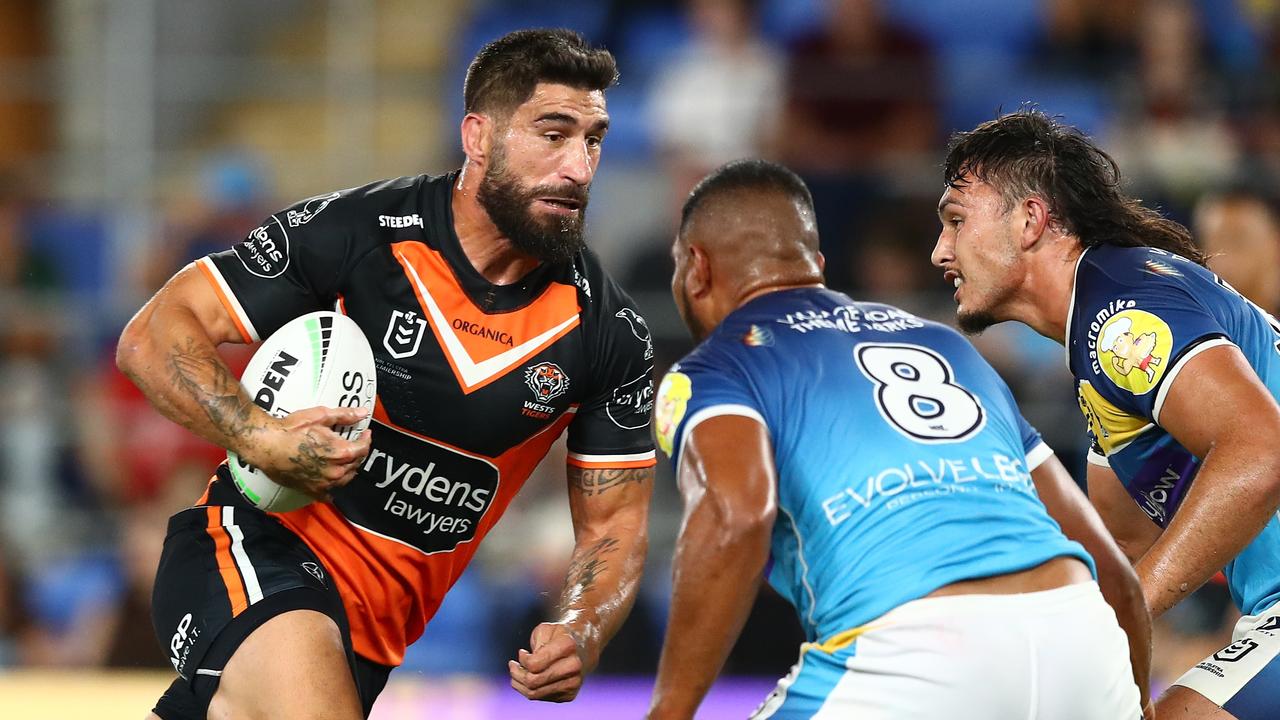 Tamou is one of five players, including Tommy Talau, Thomas Mikaele, William Kei and Jock Madden, without a deal for next season.

The Tigers are in discussions with Madden about an extension but he is seeking assurances the club views him as a long-term option in the halves.

The future of Luke Brooks, who is contracted until the end of 2023, had been under a cloud but his found confidence after being switched from halfback to five-eighth could have an impact on Madden’s decision.

Brooks said Madden could leave the club in a bid to play more regular first grade.

“He went to reserve grade last week to get some time, more match fitness because he has been on the bench for us,” Brooks said. “He had a great game back in NSW Cup from what I watched. He is a great asset. But it is up to him to decide wherever he feels he will be playing the most footy somewhere else.”

The Tigers have 24 players contracted for next season but it is believed the club is looking into moving on hooker Jacob Liddle, who is signed until the end of 2023. Liddle has reportedly been offered to St George Illawarra and Canberra with talk the 25-year old will drop to third on the pecking order next year behind new recruit Api Koroisau and Jake Simpkin. But Tamou believes Koroisau’s arrival will only be a good thing for Simpkin and Liddle.

“He is going to have a massive impact on them,” Tamou said. “Api Koroisau is a world-class player. I got the chance to play with him at the Panthers. The things he does, he is a premiership winner and that experience will help those two go the new heights.”

The Tigers will be looking to snap a two-game losing streak against Tamou’s former side North Queensland on Sunday at Suncorp Stadium.

Tamou, who won a premiership with the Cowboys in 2015, said the Tigers’ engine room will have their “hands full” against the competition surprise packet.

“They have been one of my favourite teams to watch, they play an exciting brand of football,” he said. “They have Jeremiah Nanai, Heilum Luki doing really well, Chad Townsend has straightened the ship for them and their backs are humming.

“Big Jason Taumalolo is one of my favourite players, you can never put him down. He’s just a freak of a talent. We are going to have our hands full.” 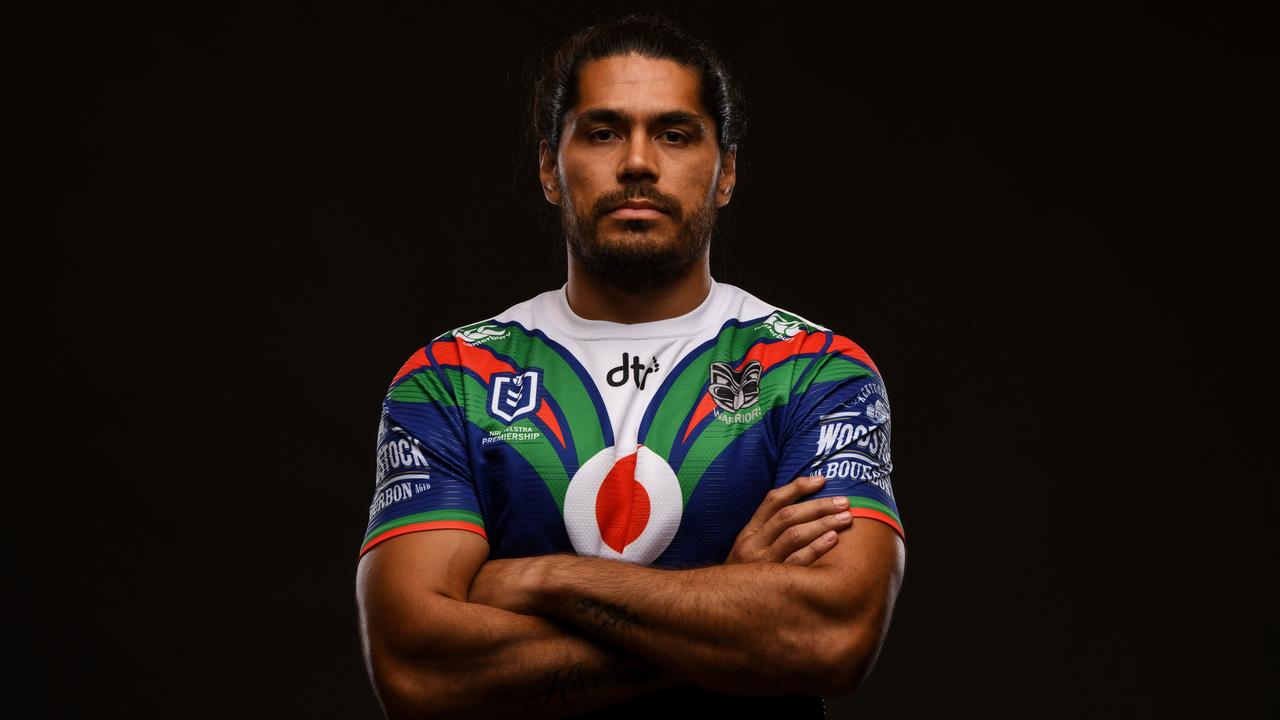 The Warriors are returning home as they left it – as the NRL’s perennial underachievers. Tohu Harris is not just eyeing improved results, but a complete shift in how the club connects with people inside and out. Billy Slater and Cameron Smith are back with the Blues in their sights as the State of Origin series looms, Brent Read reveals why the State could not be in safer hands. Lodge tells all: Why I really quit the Warriors

Matt Lodge has been silent on his departure from the Warriors — until now. He lifts the lid on claims of racism, his bust-up with Warriors owner Mark Robinson and why he rejected a mega deal. 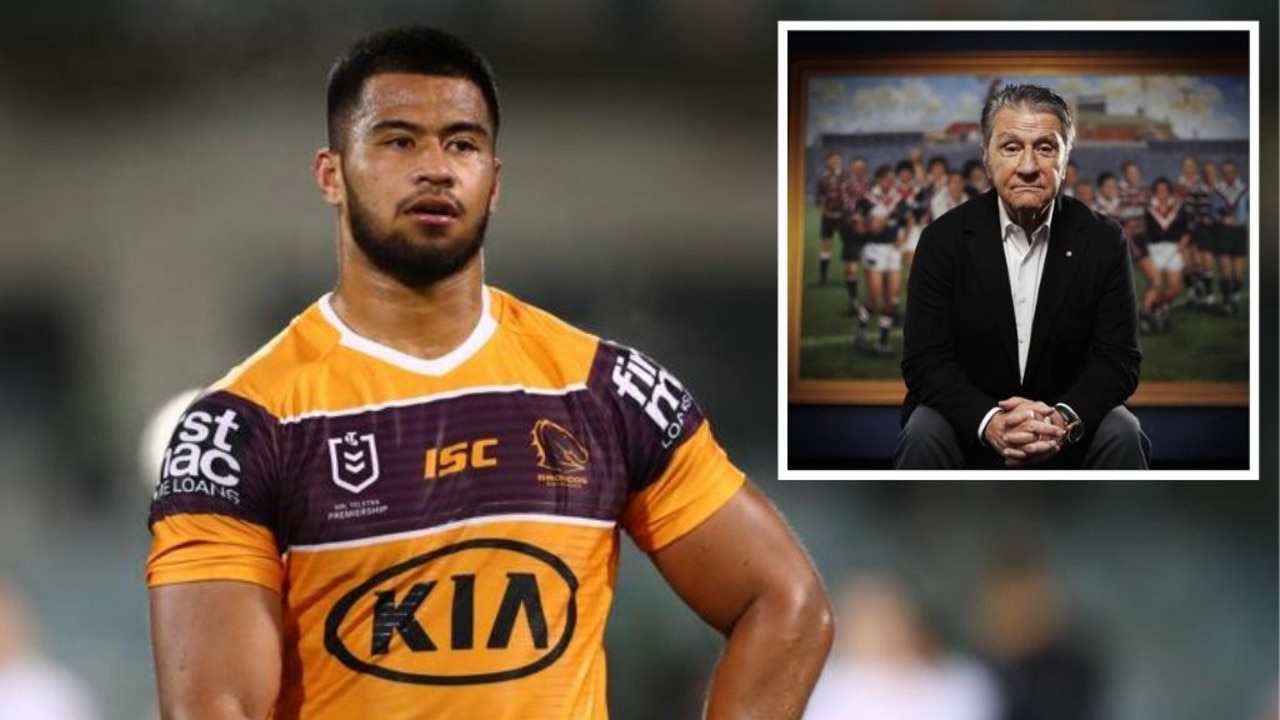 Gamble’s game of NRL snakes and ladders pays off

He’s fought and scrapped for an NRL jersey for as long as he can remember – and now that Broncos playmaker Tyson Gamble has his final chance, writes JOEL GOULD, he’s going to make it count. Sorry, Payne, it’s over. No matter the outcome of the Broncos star’s contract negotiations, Brisbane fans will never forgive you walking out on them.