Maroons coach Billy Slater has dismissed criticism of Knights star Kalyn Ponga’s form and will back him to find his best form for Queensland in Origin I.

Ponga will be named Queensland’s fullback for Origin I, with only injury to prevent the incumbent custodian playing for the Maroons at Accor Stadium on June 8.

Ponga has attracted criticism over his performances and leadership during the Knights’ shocking start to the year, with Newcastle last on the ladder going into Friday night’s cellar-dweller Magic Round clash with Canterbury at ­Suncorp Stadium.

With only four Maroons appearances next to his name since debuting in 2018, Ponga has had an injury-affected Origin career and is facing competition from the likes of Warriors whiz kid Walsh and Titans dynamo AJ Brimson.

But he made a noticeable difference to the Maroons in his sole appearance during last year’s series as Queensland avoided a clean-sweep with a Game Three victory. 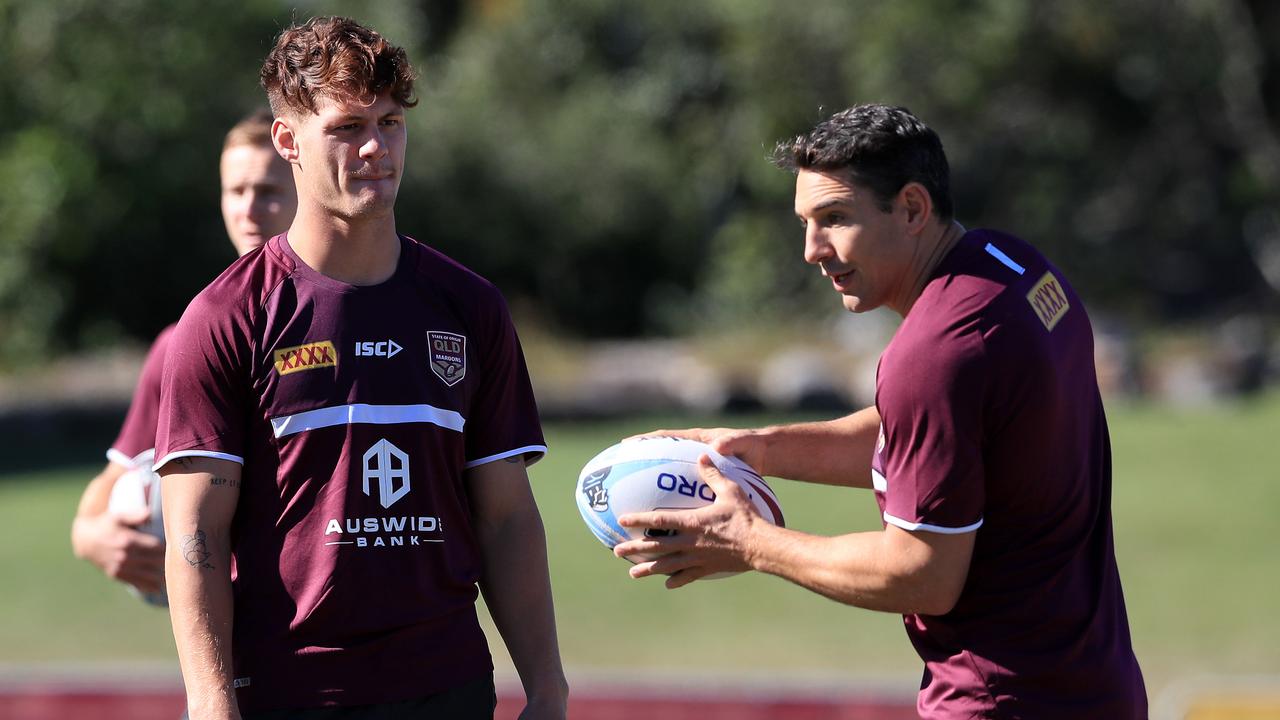 Kalyn Ponga and Billy Slater are set to reunite in the Origin arena again this season. Picture: Adam Head

And despite Newcastle’s struggles his class hasn’t gone unnoticed by Slater, who is set to reward Ponga with the No.1 jersey for Game One.

“Do I think he is playing poorly? No I don’t, actually,” Slater said.

“I think he is putting in a whole lot of effort and he is juggling playing alongside different key players each week. It is really tough playing in a team that isn’t going so well.

“The one thing I like about Kalyn is he is showing those efforts to be in the game. It doesn’t overly concern me how the Knights are going.

“He is the captain of the team, he would feel a huge responsibility for how the Knights are going, but I’m seeing a whole lot of fight and effort in Kalyn’s game. He is playing really tough and getting himself involved.

“He is a quality player and Kalyn is a good person. There was a whole heap of noise around his contract stuff but I felt it was unwarranted and it’s all settled now. Kalyn Ponga has had a mixed season with the struggling Knights. Picture: Ashley Feder/Getty Images

“Kalyn made a huge difference in Game Three last year. I know what Kalyn can produce in the Origin arena and it’s part of my role and my coaching staff’s role to get them prepared well.”

Ponga, 24, is facing the toughest test of his 90-game career as the first-year captain attempts to lead Newcastle out of wooden spoon contention.

But he has been buoyed by the support of Slater, arguably Queensland’s greatest ever fullback who played 31 Origin games for the Maroons and has been acting as a mentor.

“I’ve been fortunate enough to talk to Billy and have him there for advice and help,” said Ponga, who is hoping to raise plenty of money in this weekend’s ‘Score a Try with Ampol’ initiative.

“Even before he was coach of the Maroons he was always that for me. He is pretty honest too. He would tell me if I wasn’t doing all those sorts of things.

“To have him say that, and know that if I need him I can call him and ask for help, is pretty special. He sees things and interprets the game in ways that I don’t yet because he is so good. It’s ­awesome to talk to him.” 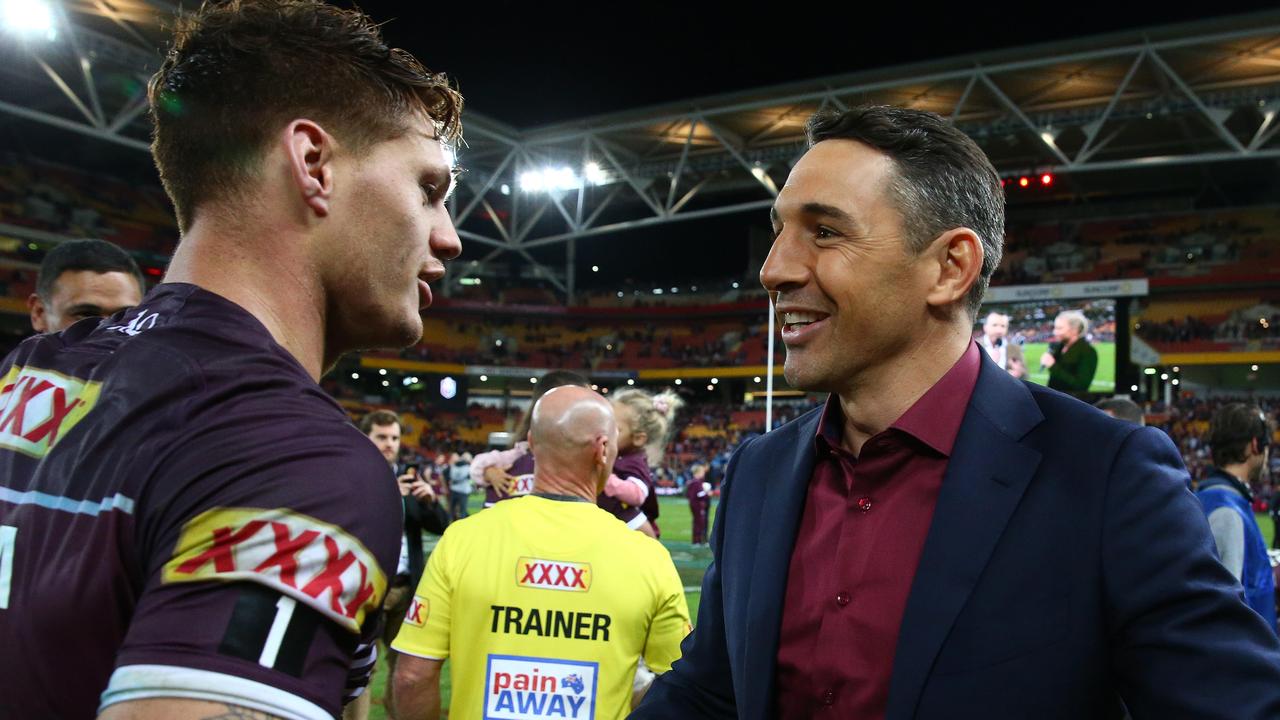 Billy Slater is confident he can bring out the best in Kalyn Ponga in Origin. Picture: Adam Head

After back-to-back wins to start the season, the Knights have lost their past eight games to slump to last place on the ladder.

Injury robbed Ponga of the chance to play in last year’s Magic Round and he is confident the Knights can get back in the winner’s circle against the Bulldogs, especially with $500 to be donated to flood-affected schools by Ampol for every try scored.

“I will try my best to do my part and score a few tries,” Ponga said.

“We’ve got to worry about our effort, that’s one thing we need to be more consistent with over 80 minutes.

“We need to control our footy for 80 minutes and limit the silly things we’ve been doing like penalties and dropped balls.”

Queensland coach Billy Slater has revealed he is considering Selwyn Cobbo for a shock Origin debut as Brisbane’s Magic Round rivals Manly hatch plans to poach the Broncos teenage sensation.

News Corp can reveal the Sea Eagles are one of seven clubs to have expressed interest in the brilliant Cobbo, who has rocketed into Origin contention ahead of his 17th NRL game on Friday night against Manly at Suncorp Stadium.

Cobbo’s predecessor on the Broncos wing, Xavier Coates, made his Queensland debut after just 15 games and Slater said he would not be afraid to hand the 19-year-old his Maroons debut in Origin I at Homebush on June 8.

The 100kg winger ran riot at NSW’s home ground last week, scoring two tries in Brisbane’s 32-12 rout of Souths at Accor Stadium, and Slater confirmed he will be at Suncorp on Friday watching several Broncos, including the classy Cobbo. 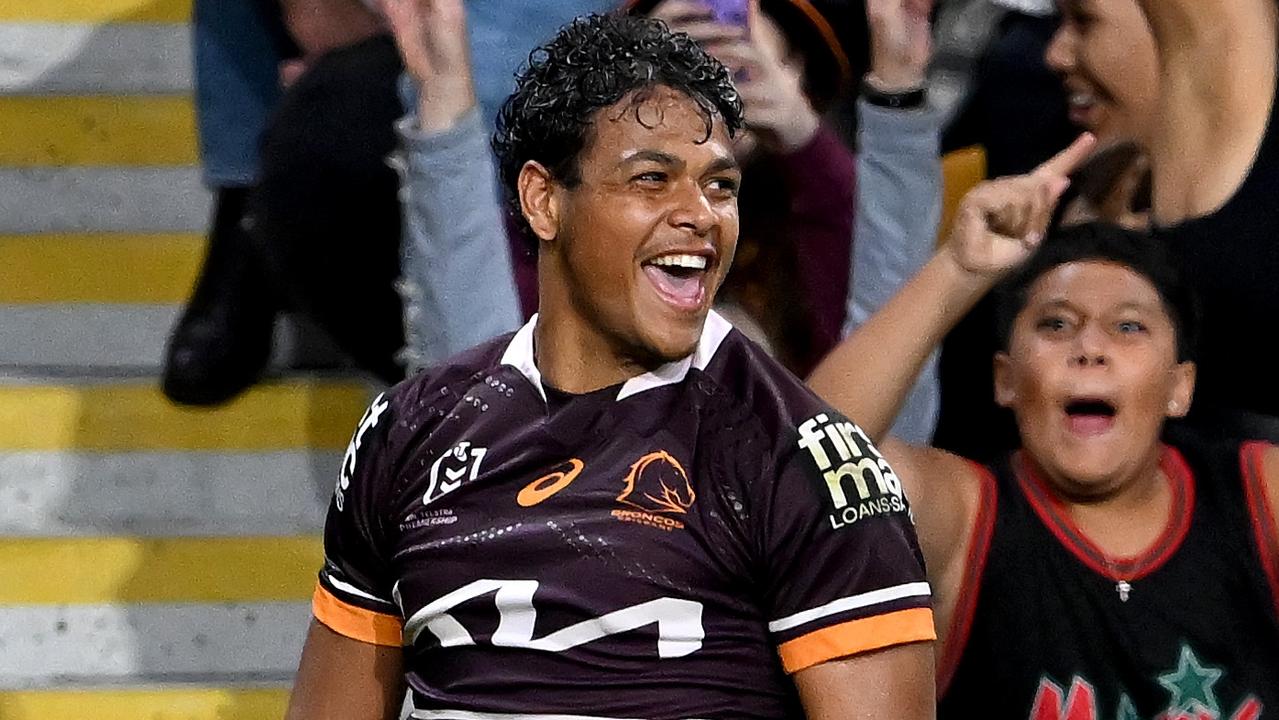 Selwyn Cobbo has been impressive for the Broncos this season. Picture: Bradley Kanaris/Getty Images

“I have been so impressed with Selwyn Cobbo,” said Maroons legend Slater, who played the first of his 31 Origin games at age 20.

“Selwyn is doing a lot of things right, he is really standing out.

“I will make a decision on Selwyn in a few weeks time, but for me, your age is your age and you only get experience in Origin by experiencing the actual game.

“If we feel Selwyn is the best person to fill a position in our team, we’ll pick him, but if other people are better credentialed, then we will back those guys.

“But age is not a concern for me. It is not a barrier for me. I want to see actions each week and I love Selwyn’s aggression. He is a fierce competitor.”

Coates and Kyle Feldt are the frontrunners for Maroons wing spots for Game One, but Cobbo can send an emphatic message to Slater and Queensland selectors with another barnstorming display against the Sea Eagles.

From nine matches this season, Cobbo has four tries, four line breaks, 35 tackle busts and is averaging 114 metres per game. 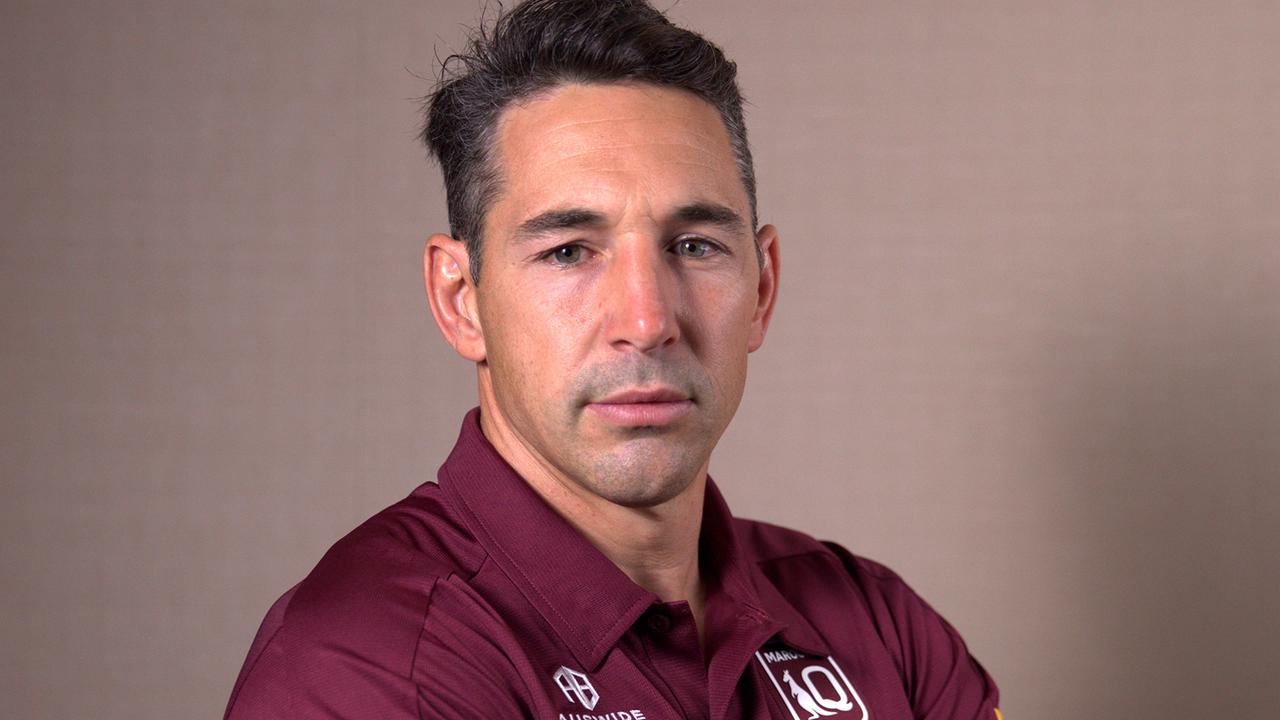 But numbers alone don’t tell the full story. Slater is watching Cobbo’s efforts and body language. He believes Brisbane’s version of Latrell Mitchell has the toughness to relish the physicality of Origin.

“There was a moment a few weeks ago where Selwyn was in the in-goal and he just pinned the ears back and basically said to the defence, if you are good enough to stop me, good luck to you,” Slater said.

“He just has the mentality when he gets the ball and I like it. I actually commentated on his debut game for Channel 9 against the Dragons last year and he displayed that attitude from his opening game, so I know that is ingrained in the way he plays.

“There are parts of Selwyn’s game that are still raw and he will build on those areas in the years to come. He has a good mentor in Darius Boyd (former Queensland winger and fullback) at the Broncos who works on the positional parts of his game, but Selwyn has as much as talent as anyone.” Such is his talent, a host of NRL rivals are circling.

After Cobbo terrorised Souths last week, a big-name official contacted his management urging them to hold off signing with the Broncos, who have begun talks to upgrade the teenager until the end of 2025.

Manly are among the clubs who want Cobbo on their books for 2024, but Brisbane coach Kevin Walters insists the Cherbourg flyer is going nowhere.

“We are very hopeful we can keep him here,” Walters said.

“We see Selwyn as a long-term player for our club, we love what he brings, even at such a young age. He has played some great footy this year which is great for us as a team and great for Broncos fans.

“Selwyn looks good in Maroon and we intend on keeping him here for many years.”