NSW is flush with talent at the fullback position - but Ryan Papenhuyzen is making a case that he simply cannot be left out of Brad Fittler's side for this year’s State of Origin series.

Melbourne Storm coach Craig Bellamy said star fullback Ryan Papenhuyzen “can’t do any more” to earn his first State or Origin call-up after winning the Anzac medal his team’s 70-10 thrashing of the Warriors.

Papenhuyzen scored two tries, and set-up three more in the Anzac Day rout which Bellamy said was as much a result of the visitors being hit by injuries as his own team’s dominance in a 10-try second half.

Behind NSW fullback, and captain, James Tedesco in the pecking order, Papenhuyzen said he “hadn’t really thought” about Origin.

But Bellamy believes he deserves a shot, if only on the bench for the Blues.

“I’d love to see him in there, I think he deserves to be there,” he said. Ryan Papenhuyzen is turning up the heat in the battle for the NSW fullback spot. Picture: Getty

“The incumbent is Tedesco … he’s been one hell of a player for NSW. Last year we were really made aware of how many great fullbacks we have eligible to play for NSW.

“I thought Paps would be a chance last year to go in on the bench. The one thing I will say is he can’t do any more than what he is doing to keep knocking on the door.”

Papenhuyzen said nothing could distract him from playing his best for Melbourne, and anything beyond that was a bonus.

“I haven’t thought too much about Origin to be fair. You play good footy, you get picked in those sides,” he said.

“I’m in a good footy team here, and valued here. That’s what I am focussing on.” Recruit Xavier Coates also scored four tries in his best outing in purple and Bellamy said he had been a “little bit down” about a lack of defensive cohesion with his new teammates.

But Bellamy said the winger threw himself into making improvements and that came through in his starring role in the rout.

“One thing about Xavier, whatever he does he does flat out, he went flat or a few times and that’s why he got a couple of those tries,” he said.

“We love having him in our side and he’s a valuable member.”

Bellamy said the lack of ball the Warriors had in the second 40 minutes, completing just two of seven seven sets, was something he’d never seen before in a game of rugby league and contributed to the huge scoreline.

“I don’t think I’ve ever seen that or heard of it,” he said.

“A lot of things went against the Warriors, but having said that I couldn’t fault too much of what we did. It was a really dominant performance.

“I don’t want to take any gloss off how well we played, but not much went right for the Warriors in the second half. “

Melbourne Storm front-rower Nelson Asofa Solomona provided the try-assist of the season in a match-changing moment at AAMI Park which ended with Warriors winger Dallin Watene-Zelezniak stretchered from the field and his team in tatters.

On a record-setting night Storm took its winning streak against the New Zealand outfit to 12 in a near-unbelievable 70-10 victory with Xavier Coates running in four tries, including three in a stunning eight minutes in a 10-try second half as Melbourne racked up the biggest score of 2022. 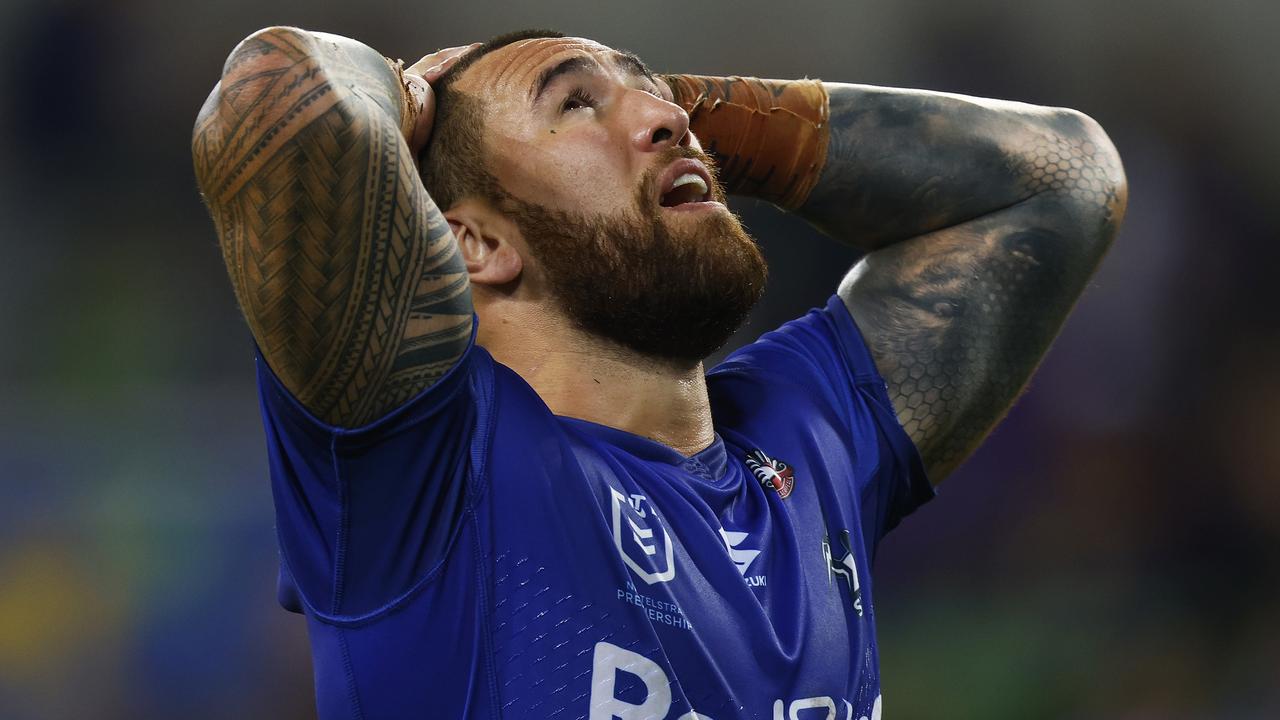 But the staggering try-scoring romp only came after the game was brought to a sudden halt following Ryan Papenhuyzen’s 47th minute four-pointer.

After Asofa-Solomona put up the most unlikely of kicks for the Storm flyer to score for the 10th game straight at AAMI Park, Watene-Zelezniak’s head collided with his New Zealand test teammate’s thigh in a sickening collision close to the line.

Melbourne’s celebrations were immediately muted as the Warriors winger was attended by medical staff from both teams, and after several minutes he was stretchered from the field with blood coming from his mouth.

Watene-Zelezniak was conscious in the rooms and Warriors officials reported that he had likely escaped serious injury.

But with the wind taken out of the tourists, Melbourne scored another two tries in the following five minutes to break their spirit after a more than valiant opening half had them in the game, down just 18-10 following five tries in an entertaining opening 40 minutes.

The wall the Warriors had put up in the opening half then completely collapsed as Melbourne powered its way to eight second-half tries to complete the Anzac Day rout.

“It was quite unbelievable that second-half,” Papenhuyzen said post-match

“I don’t know what to say when you score that many points.” Warriors big man Aaron Pene could find himself in strife after a high hit on Storm centre Reimis Smith, which forced him out of the game with concussion.

He was down for close to 30 seconds before referee Chris Sutton realised there was something wrong, aided by the baying of the crowd who saw Pene’s shoulder collect Smith’s head.

Pene was put on report and the energy rose as Justin Olam, on the back of the penalty, made a 13th tackle bust in the opening half for his team, only to be laid out by Reece Walsh’s shoulder as the Storm centre slipped in to a tackle, leading to the Papenhuyzen conversion to end a frantic opening stanza. No-one was more fired up during the moving pre-game ceremony than Asofa-Solomona who sang the New Zealand national anthem particularly with gusto.

But he charged so hard after kick-off he felt a hamstring twinge which forced him from the field before he could touch the ball.

He went to the bench where enough work was done to get him back onto the field and he rediscovered that pre-match energy to charge for nearly 100m in his 20 minutes of game time in the opening half alone, with some serious post-contact metres, before the outrageous kick which turned the match on its head. 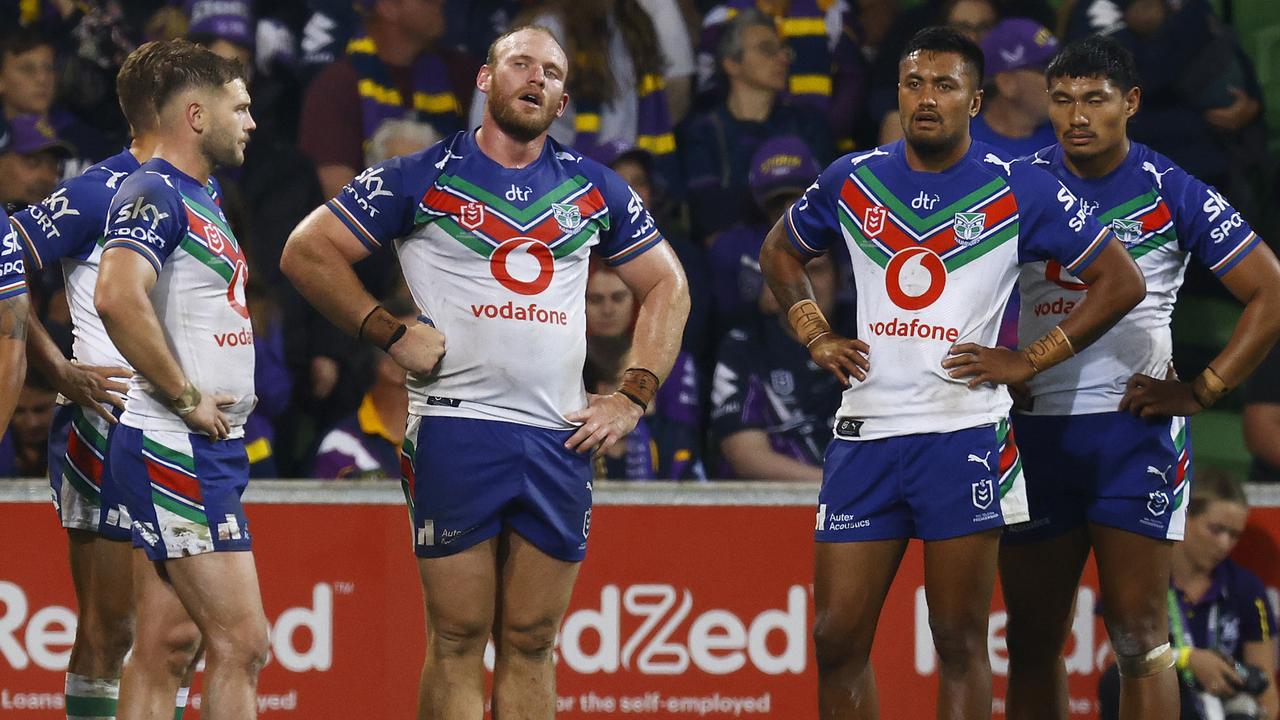 The Storm didn’t know what hit them in the second half.

Warriors winger Ed Kosi couldn’t have had a worse opening 25 minutes, with two fumbles, both without any physical contact from an opponent, leading directly to two of Melbourne’s first three tries.

His fumble in open field as he steamed to the try line was pounced on by Papenhuyzen who fed Hughes for a 70m run and score. Then Kosi didn’t bend enough to pick up last-ditch grubber from Hughes, kicking the ball instead, and Xavier Coates was there to pounce. 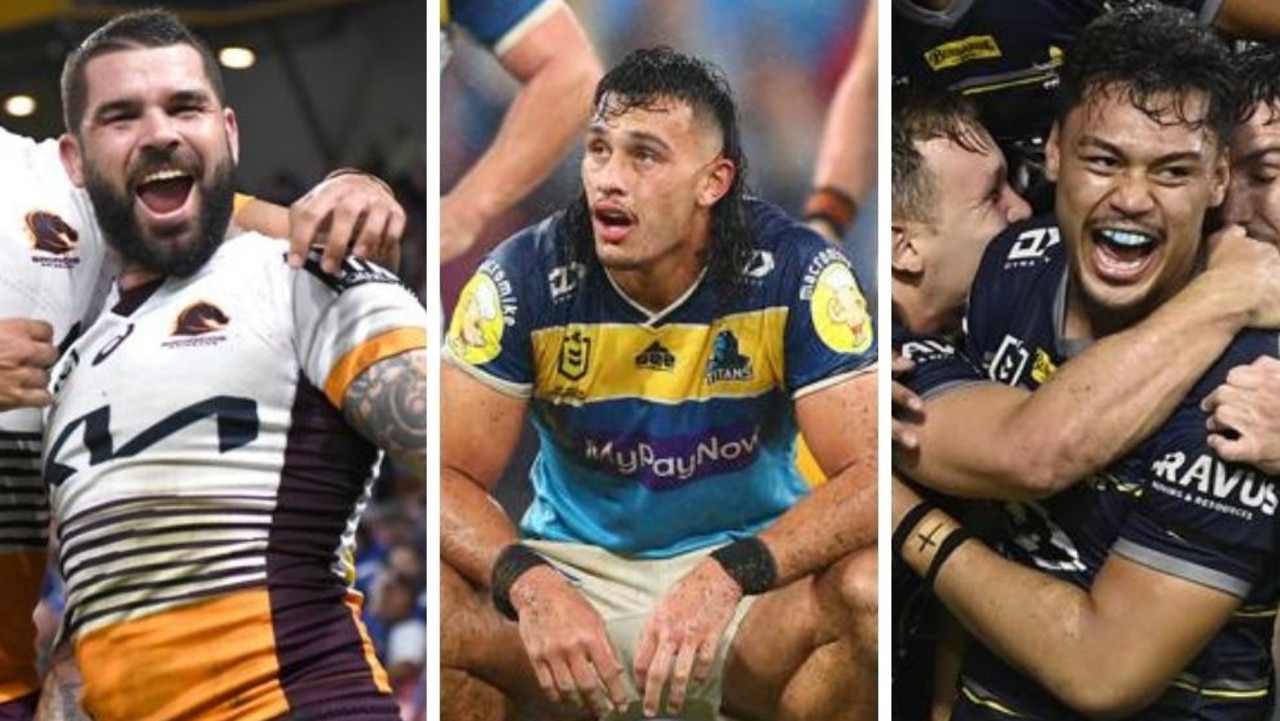