Wests Tigers star Adam Doueihi believes Pat Carrigan got off lightly for the ugly hip-drop tackle that ended Jackson Hastings’ season and the judiciary needed to dish out a longer ban.

Wests Tigers star Adam Doueihi has hit out at Pat Carrigan’s ‘unfair’ suspension and believes the Brisbane forward got off lightly after ending Jackson Hastings’ season with an ugly hip-drop tackle.

Carrigan copped a four-week ban for the tackle that left Hastings with a broken fibula and a syndesmosis injury. But Doueihi wanted to see the NRL judiciary dish out a harsher punishment to the Broncos lock given Hastings is now facing a three-month recovery.

“Personally, I don’t think it was fair, I don’t think so. Jackson is out for three months,” Doueihi said. “People say it is accidental but he sort of went in there with a bit of force and … it’s a tackle you want to get out of the game.

“Seeing it first hand, seeing Jackson and the pain he was in … as I said, he (Hastings) is out for three months, for Patty to come back, I’m sure it wasn’t intentional, after four weeks, I think is not fair.” “I don’t know (what the suspension should be) … but Jackson is out for three months and the person who did the tackle is out for four weeks so we need to find a happy medium somewhere.”

On Thursday, Hastings’ mother, Meg Harrod, revealed on social media that the playmaker’s ankle injury was “worse than expected” but that the surgery was a success.

Hastings has wasted no time in starting the rehabilitation process and was already back at Tigers headquarters 24 hours after going under the knife.

“I reached out to him this morning after he had surgery and it was really successful,” Doueihi said. “He said he was up all night, he can’t sleep at the best of times.

“He’s in good spirits and has decided to come back in and get his rehab underway.”

Last week, Melbourne approached the Tigers, who have not appeared in a finals series since 2012, to loan Doueihi for the rest of the season given the mounting injury toll to coach Craig Bellamy’s backline stocks.

Club officials blocked the deal and offered up winger David Nofoaluma instead. 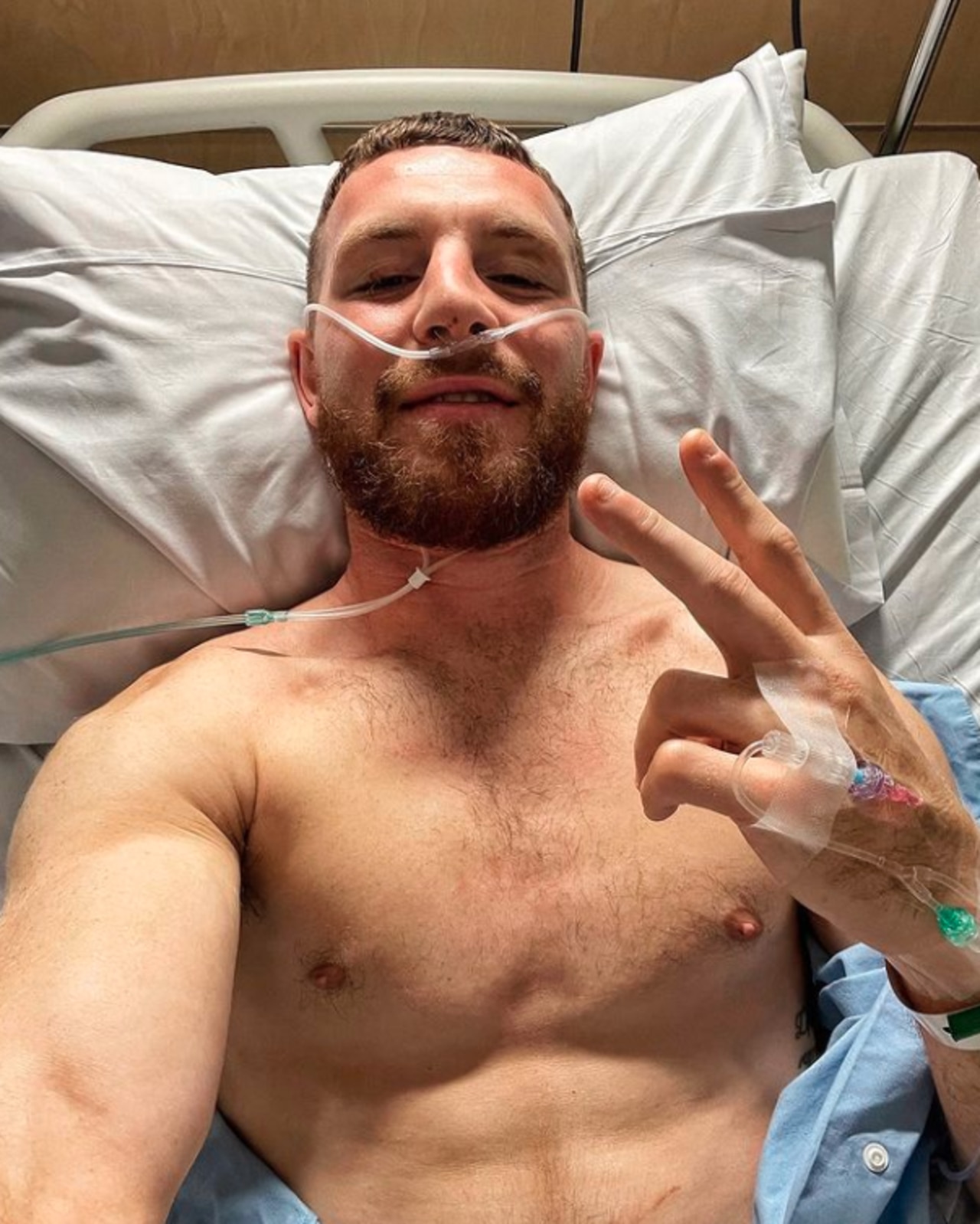 Jackson Hastings had surgery on his leg on Wednesday and is expected to be out of action for three months.

But Doueihi was open to the move south in a bid to gain ‘big-game experience’ having only played three finals matches in his 76-game career.

“The Storm have been in the finals every year in the past decade, they are doing something right down there that not many people know about,” Doueihi said.

“To be able to get the access for a few months and play finals footy, see what it is like playing some big games, learn different structures and bring back some ideas back to our organisation would have definitely helped us.”

With Hastings and Luke Brooks (calf) sidelined, Doueihi will line-up alongside rookie playmaker Jock Madden in the halves for the rest of the season.

Madden, who is without a club for 2023, has been stuck behind Hastings, Brooks and Doueihi at Concord. 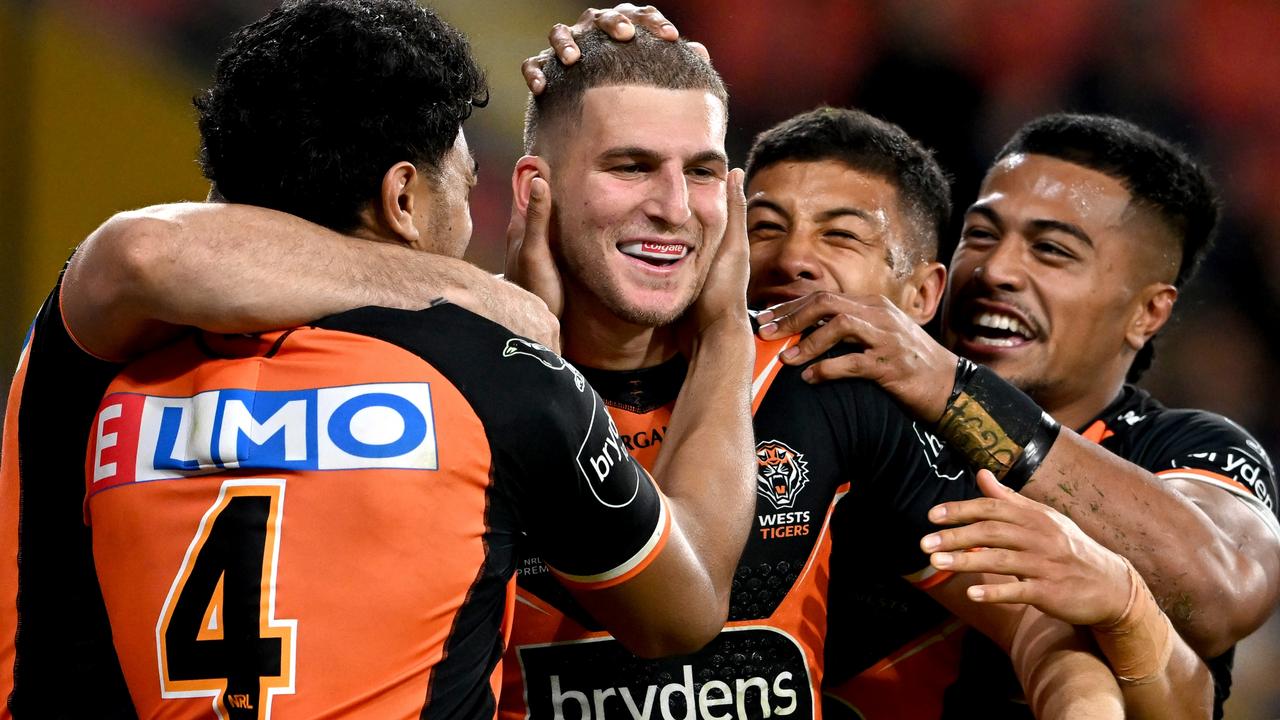 Doueihi is hoping the Tigers ‘snap up’ Madden before a rival club.

Head coach in waiting Tim Sheens told The Daily Telegraph he wants Madden to be part of his squad in 2023. But the 22-year old, who has only played 11 games in two seasons, is looking to play regular NRL and has been linked with a move to Penrith.

“If he wants to stay here, we can keep him,” Sheens said.

“When you are the back-up halfback you are only going to that for so long if you get an opportunity to play somewhere else and be the first string in that position.”

Broncos forward Patrick Carrigan has been suspended for four matches after he was found guilty of making dangerous contact in an ugly hip-drop tackle that fractured Jackson Hastings’ right fibula and did damage to his syndesmosis during Saturday night’s game at Suncorp Stadium.

Carrigan was referred straight to the judiciary for the tackle that has seen Hastings wiped out for the rest of the season.

Hastings writhed in agony after he was held up by Broncos pair Cory Paix and Keenan Palasia, before Carrigan leant his weight to the tackle around the hips and landed on his opponent’s right foot.

On a dramatic night at the judiciary, the NRL’s lawyer had asked for a ban of five to six matches to make an example of Carrigan while defence counsel Nick Ghabar had pushed for two weeks. 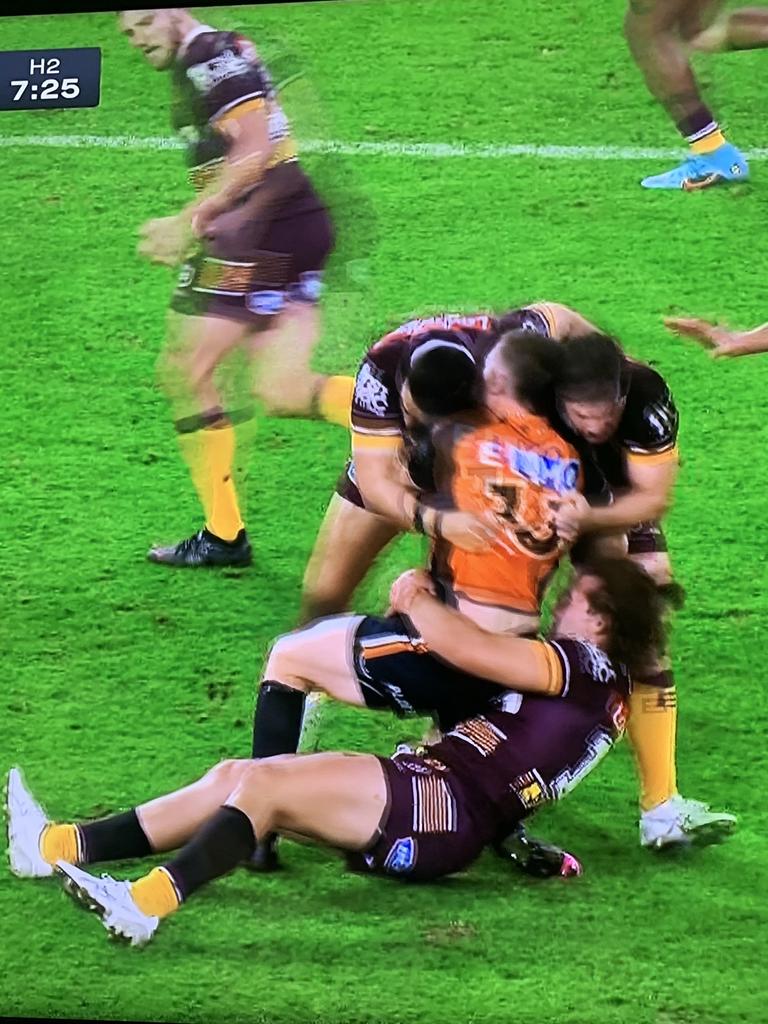 Carrigan was put on report.

The panel of Dallas Johnson and Henry Perenara reached a unanimous decision that Carrigan’s actions had put Hastings in a vulnerable decision and that the penalty would act as a deterrent to other players.

“I’m very grateful to Nick and the NRL for a fair hearing,” Carrigan said.

“I’m a little bit disappointed with the result.

“I certainly didn’t have any intent or malice in what happened, but I’m also aware that Jackson is going to miss a bit of footy. I wish him all the best with his recovery.

“My focus is to be as supportive as I can for the Broncos for the next four weeks.”

The Wally Lewis Medal winner from State of Origin made the trip to Sydney but didn’t give evidence at the hearing.

Instead, five angles of Carrigan’s tackle and a similar tackle by Dragons forward Josh McGuire against the Storm in Round 10 last year were used primarily during the case.

McGuire was hit with a grade three charge under the game’s old judiciary code and was banned for five matches, although he did have carryover points which added to his penalty. The tackle on Melbourne’s Josh Addo-Carr did not result in serious injury, although the winger was forced from the field for seven minutes.

NRL judiciary counsel Patrick Knowles referred to a memo sent by NRL head of football Graham Annesley to all 16 clubs on July 21st, 2020, where he warned players about the hip-drop tackle that had started to creep into the game.

Knowles said that Carrigan’s tackle had all the same “hallmarks” and that it involved the dropping of weight from the hips and the trapping and twisting Hastings’ legs which created an obvious risk of injury.

Knowles asked the judiciary panel to suspend Carrigan for five to six games, pointing to the fact that that Hastings required surgery to insert a plate and screws and that he would miss three to five months of footy as a result.

While he didn’t want “eye for an eye” retribution, he argued that Carrigan’s high level of force and carelessness should be punished severely. The tackle has left Hastings with a fractured ankle and ended his 2022 season. Picture: Getty Images.

Ghabar said his client only deserved a two-week ban given he showed contrition, had done everything in his power to actually limit the risk of injury on Saturday night and had only been charged twice during his 62-game career.

He pointed to a medical report from a third-party doctor that said the injury was exacerbated by the other tacklers pushing from the top, which twisted Hastings into a dangerous position and added weight to the tackle.

Ghabar said that was a lot different to McGuire who landed directly on Addo-Carr’s foot and argued that the Dragons forward was reckless and that his actions bordered on intentional.

Broncos’ top-four tilt turned on its head by feisty TigersCrystal ball: The big carrot at end of Broncos’ dream draw

He went further, saying there were “mitigating factors” from the other two tacklers who twisted Hastings into a dangerous position while Carrigan actually “arched his back” to relive pressure on the foot.

Carrigan will be free to return in Round 25 when the Broncos play the Dragons. 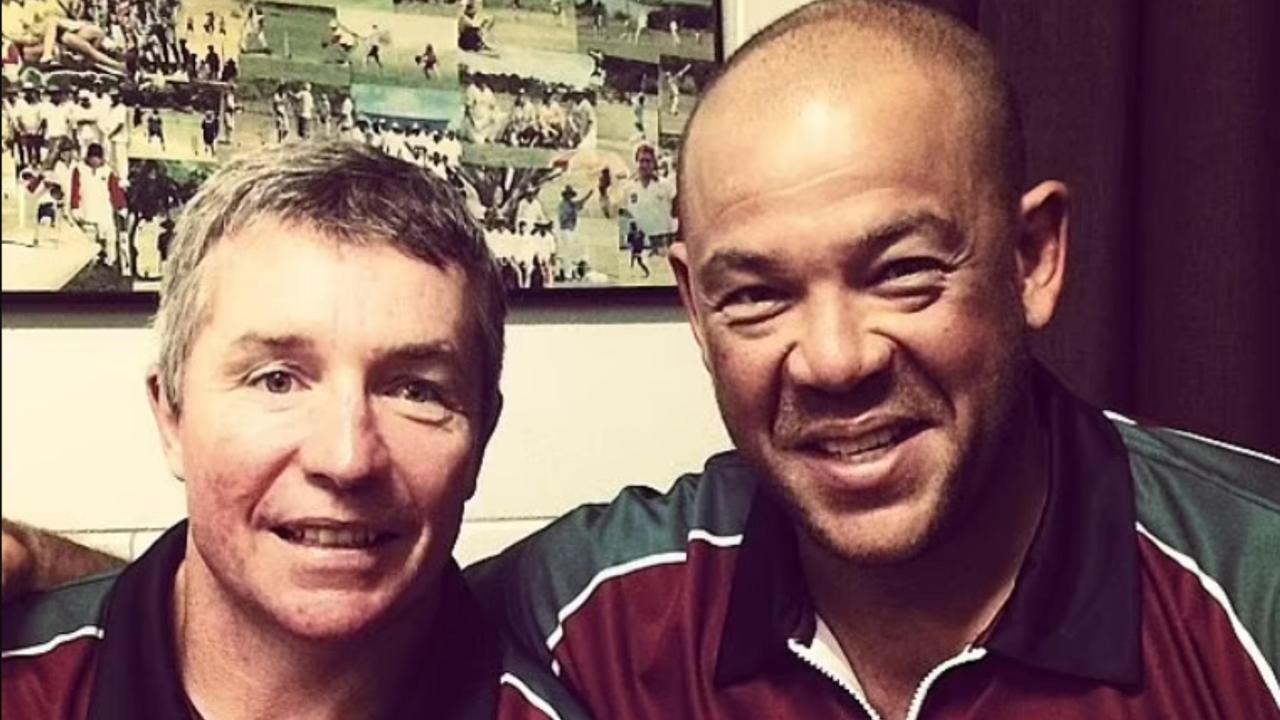