Penrith’s Blues contingent tuned up for Origin with a ruthless destruction of the Warriors, who were unable to end their tenure at Redcliffe with a win before heading back to New Zealand.

Nathan Cleary and the NSW Blues contingent in the Panthers side tuned up ahead of one of the biggest Origin games of their lives with a big 40-6 win over the Warriors.

The Panthers were far from their best but the class of Cleary, Stephen Crichton, Brian To’o, Jarome Luai, Isaah Yeo and company came to the fore when needed in front of a sellout crowd in Redcliffe, the Warriors last game at the venue before returning to home games in New Zealand.

Cleary wasn’t happy with his game in NSW’s 16-10 loss to Queensland in Sydney but he had two try assists against the Warriors, including one cracker from a scrum set piece to set up player of the match Dylan Edwards.

It was a nice taster for Sunday’s showdown in Perth with the Maroons.

“I feel good,” Cleary said, after sustaining what he said was a minor cork to his shoulder.

“I can only take it one week at a time and try and stay present. I was obviously disappointed in the result in Origin I. We are going to turn that around. The last two weeks being around these boys has been good fun and I am ready to go. Viliame Kikau could come under scrutiny by the match review committee for two shoulder charges against the Warriors. Picture: Albert Perez/Getty Images

“[Crichton] is pretty classy. I love playing with Critter. Even in his short stint in Origin I he looked like an Origin player. I think He is ready,” Cleary added when asked about Crichton coming into the Blues starting side for Covid-stricken Jack Wighton.

Two shoulder charges by Panthers giant Viliame Kikau, one on Jazz Tevaga and another on Bunty Afoa, will get further inspection from the match review committee.

Penrith forward Mitch Kenny was put on report for a high shot on Jack Murchie, but there didn’t seem to be much in any of the incidents.

From the moment Penrith prop Moses Leota split the Warriors defence on the back of Api Koroisau guile, there was no way back for the hosts.

Edwards and dynamo winger Taylan May scored before the break and To’o and Yeo the first couple in the second stanza. The floodgates opened for the competition leaders before Luai stepped most players in the Warriors side to give To’o a double.

Assistant coach Cameron Ciraldo hailed “a really committed performance” and said there were no injury concerns for any of the rep players.

“I thought our guys came out in the second half and played Panthers-style footy and were much better physically. It was probably fairly hard for the boys with 14 guys knowing they are going into rep sides next week,” Ciraldo said. “You can’t underestimate how difficult that would have been.” 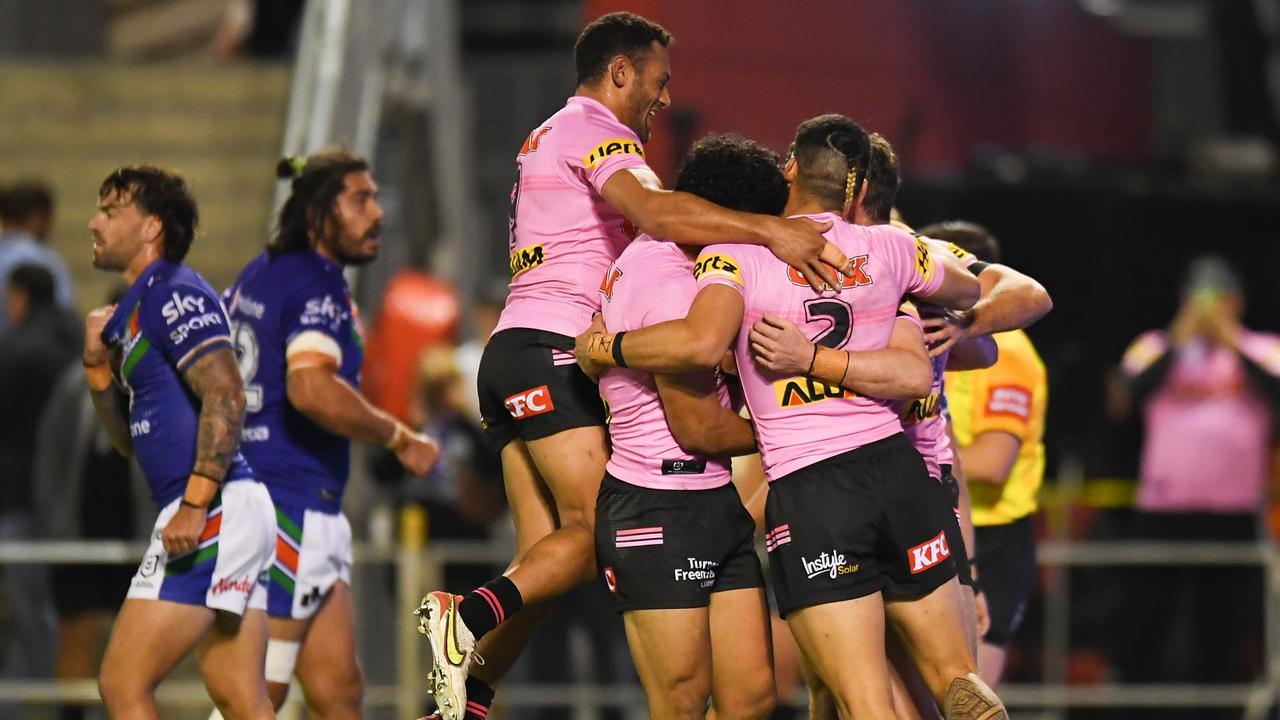 The Panthers celebrate one of their seven tries against the Warriors. Picture: Albert Perez/Getty Images

The Warriors will play their first home game since 2019 in a fortnight against Wests Tigers at Mt Smart Stadium in Auckland after the best part of three seasons on foreign soil since the Covid outbreak.

“It is going to be very exciting for the group and it gives us a chance to reset...and play some good footy and make our people proud,” Warriors coach Stacey Jones said about returning home.

The club’s contribution to the survival of the NRL competition in the most difficult of circumstances will be a lasting legacy the Warriors leave from what has been an unhappy time on the field.

The Panthers struggled during the Origin period last year but are in a strong position to get through this year’s representative window in far better shape.

After Origin II and the Pacific Tests they play the Roosters at home and then have the bye before the final game of the Origin series.

It has set Penrith up for another relentless march towards a vital top two finish. The emergence of try scoring whiz Taylan May, who scored his 14th try for the year, and continual improvement of on-fire fullback Edwards has been crucial.

The victory ensured Penrith became just the fifth side in premiership history to win 14 of their opening 15 games of the season. It was the toughest night for Warriors 19-year-old five-eighth Ronald Volkman to make his debut but the former Rooster showed enough touches of class to suggest he will be an outstanding player in the years to come.

His short passes — inside and outside — have sleight of hand and deception about them. He also put up a beautifully judged pinpoint bomb which was defused by Penrith.

“[Volkman] had some nice touches. He was involved and he gave us some good energy,” Jones said. “He put his hand up. He is confident, and I love players that are confident.”