As if the 2022 season didn’t offer enough intrigue, the NRL’s open market is set to explode with 141 NRL players, including some massive names, fighting for a new contract. Kalyn Ponga, Harry Grant and Jack Bird are all on the last year of their current deals.

More than 140 NRL players are playing for contracts in 2023, including some of the biggest names in the game.

From Kalyn Ponga to Kieran Foran, Jack Bird, Corey Harawira-Naera and Wade Graham, there is plenty to play for in what is shaping as an intriguing 2022 season. 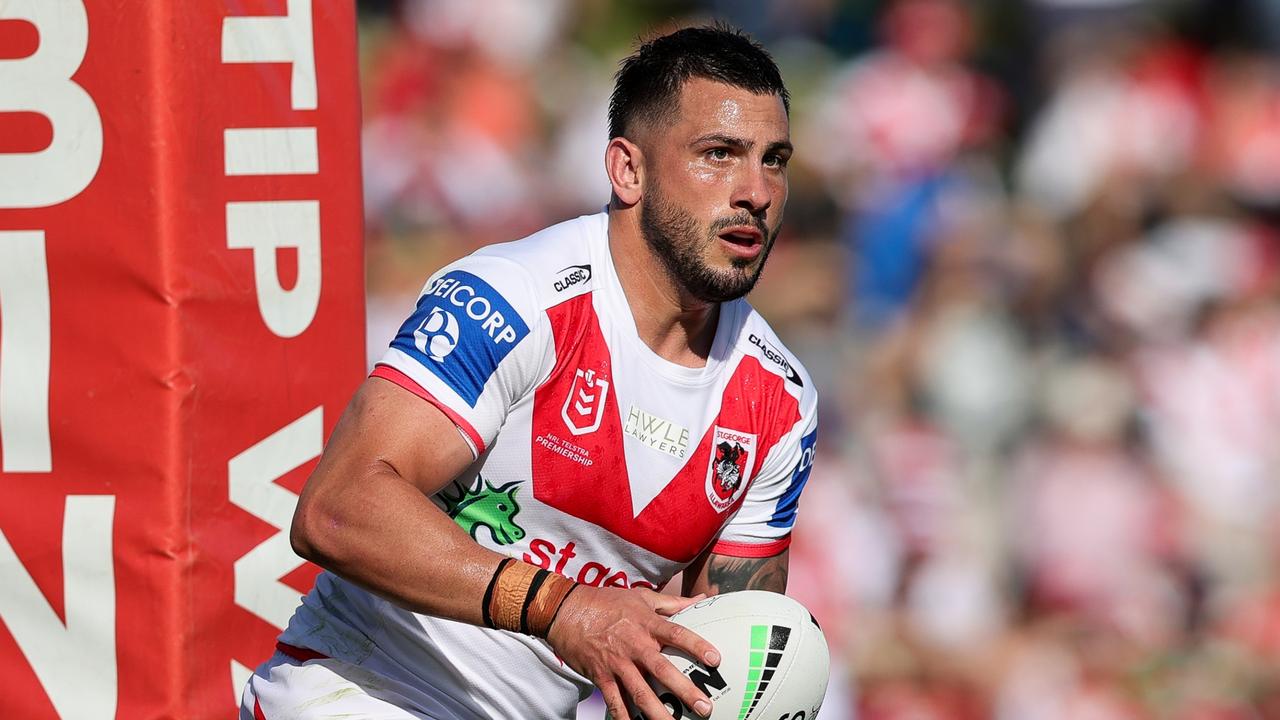 Will Jack Bird stay at the Dragons?

Jack Bird: The Dragons and Bird have struggled to find common ground during their negotiations. Bird rejected the Dragons offer worth about $500,000 - which the club has since withdrawn. Eels are circling.

Aaron Woods: The veteran has a mutual option regarding his contract for next season. He can trigger the deal automatically if he plays a certain amount of games. Has impressed with his leadership during the pre-season.

Marty Taupau: Almost certainly about to embark on his final season at the Sea Eagles. Manly have indicated they do not have cap space to keep the 32-year-old on their books. Is in the final year of a deal worth about $800,000. Interestingly, the Cowboys have made an inquiry for the front-rower for 2023.

Kieran Foran: Has survived the past two seasons on one year deals. Has shown his body can hold up, but how long can he hold off several young Sea Eagles who want a halves spot? Start of the year will be key. 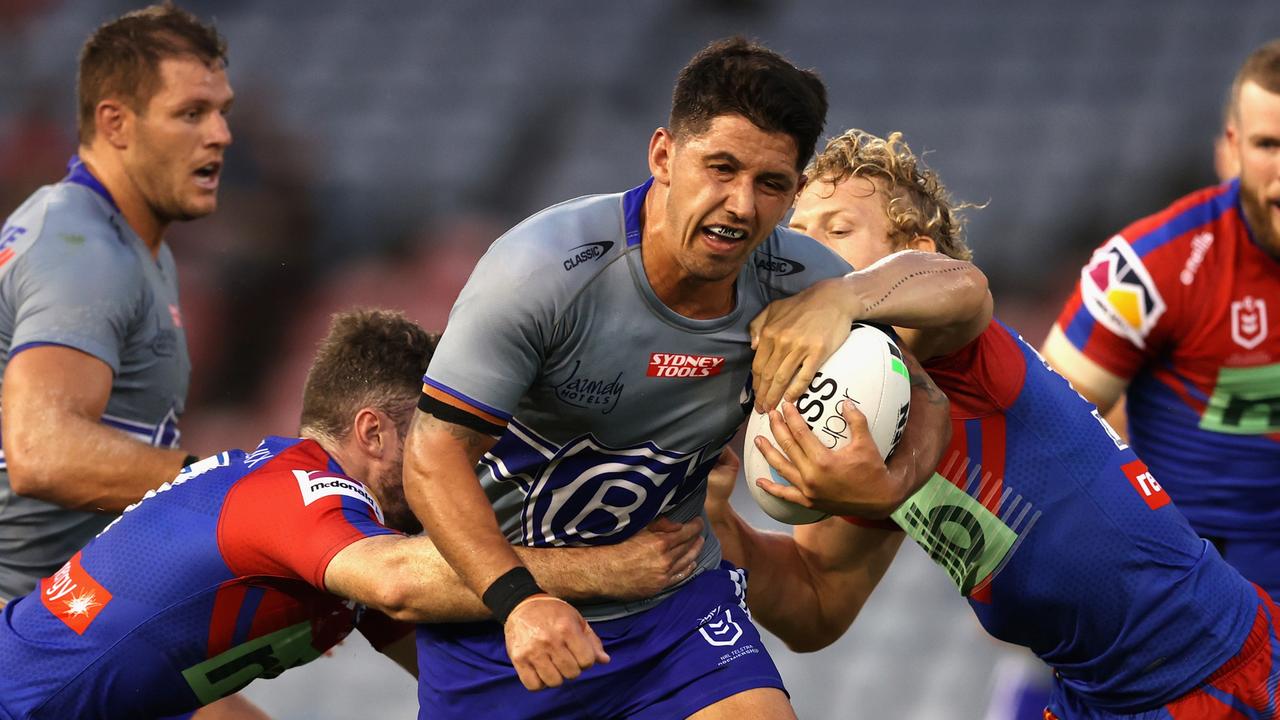 Jeremy Marshall-King will play second fiddle to Reed Mahoney if he stays at Belmore.

Jeremy Marshall-King: Has an option his way to take up the final year of his deal. It is understood he has until June 30 to decide if he wants to extend at the Bulldogs for another 12 months. Will sit behind Reed Mahoney next year.

Paul Vaughan: Landed on a cut price one-year deal. The Bulldogs tight salary cap for next season meant they could only offer him a 12 month contract. His form will dictate if he can land a longer, rich deal either at Canterbury or elsewhere.

Angus Crichton: Technically still a free agent but has agreed to a new extension with the Roosters which should take him until at least 2024. Only re-signed on a one year deal for 2022 but showed his worth last season with a career best year.

Siosiua Taukeiaho: Has been linked with a move to Super League club Catalans next season. Has been a great servant of the Roosters but is likely to play out his final season at the club. 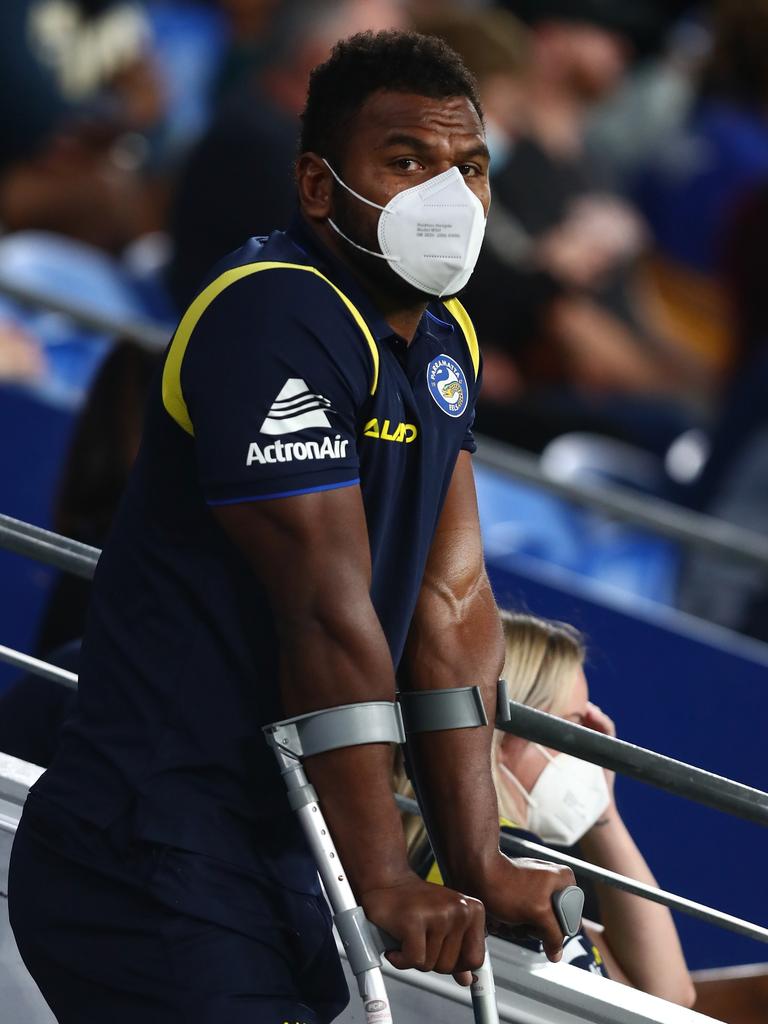 Maika Sivo: The club is awaiting word if Sivo will take up a 12 month option to extend his stay as an Eel. The injured winger has until mid-season to decide if he will commit.

Ryan Matterson: Intriguing situation. The Eels have scope to retain Matterson but he needs to show something early in the season to convince the club to do so. He took up his option to remain an Eel in 2022 but needs to return to his best form to excite the market.

Sean O’Sullivan: The back-up halfback to Nathan Cleary has already proven in Penrith’s pre-season trial matches how valuable he can be, and gets another shot in round one. O’Sullivan will become even more important for the club through the State of Origin period. Expect O’Sullivan to re-sign.

J‘maine Hopgood: The 22-year-old Queenslander is part of the next wave of young forwards at Penrith. He has enjoyed an impressive pre-season and is expected to be retained by the club with an earmark to the future. Wade Graham is on the comeback trail after repeated head knocks.

Wade Graham - The club captain and skilful backrower is on the comeback trail from repeated head knocks, and his return has been delayed by an ankle injury. At 31, he still has another contract in him provided he can stay on the field for a large portion of the season.

Andrew Fifita - The premiership-winning prop has managed 18-games in two seasons due to injury. Turning 33 in June, 2022 is likely to be his farewell season with Cronulla.

James Tamou - In the final season of an original two-year deal. The 33-year-old captain has been pivotal in the Tigers‘ fight for credibility, but with a stack of young forwards coming through the club, 2022 is likely to be his last.

Tommy Talau - This is a sad story. Talau is unlikely to play this season after suffering a ruptured ACL last September. The damage was worse than an average torn ACL, meaning he‘s unlikely to see any football in 2022. He is banking on trust from the Tigers to earn a new deal. 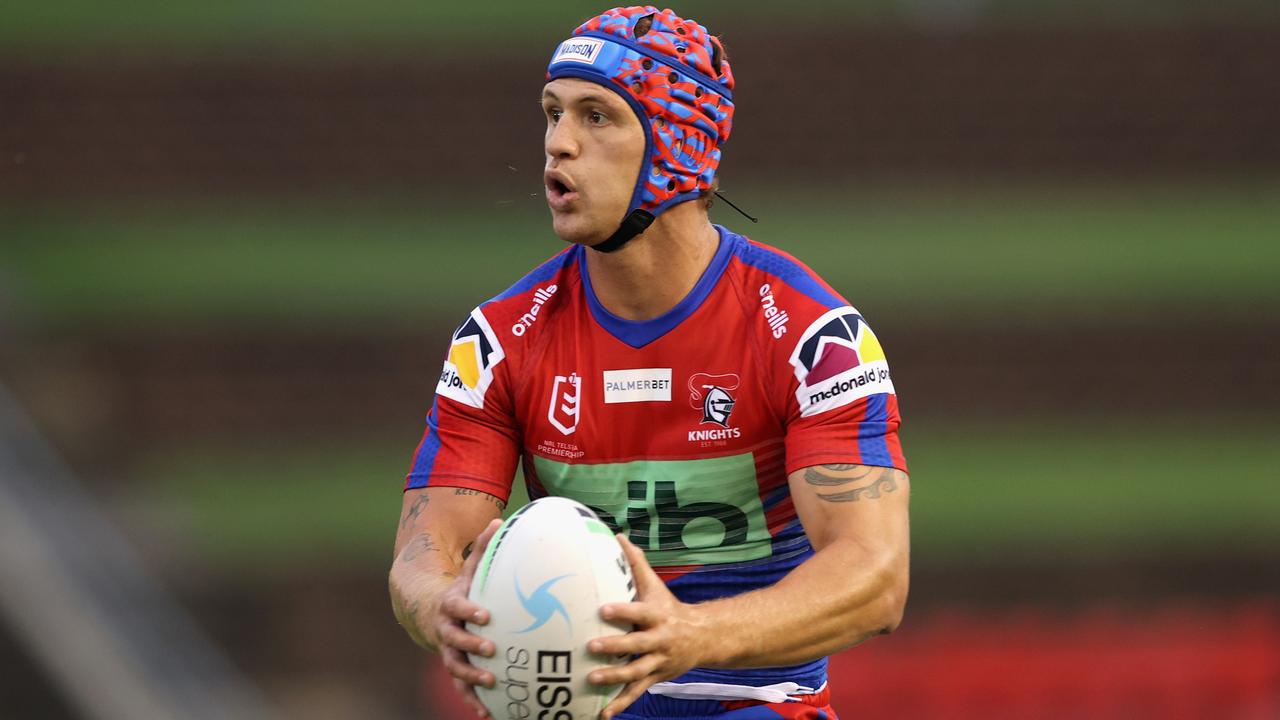 Kalyn Ponga could be the best player available on the market for 2023.

Kalyn Ponga - The player that could send the market into a spin. Ponga holds a contract with the Knights until the end 2025, but nervously for Newcastle fans, Ponga has a clause in that contract that states he can leave at the end of this season. The star fullback has until June 1 to notify the Knights whether he‘s staying on - or he wants out.

Phoenix Crossland - Knocked back an offer from the Broncos to stay with the Knights this year. A talented halfback, Crossland is suddenly a key piece of the Knights puzzle following the loss of Mitchell Pearce and an injured Jayden Brailey. The 21-year-old can cover half or hooker and is in line for a bench spot in 2022.

Adam Elliott - Gained a one-year lifeline after being let go by the Bulldogs, Elliott has impressed the Raiders with his attitude. There have already been informal discussions between club and player about extending his future. The Rabbitohs are keen to retain Jaxson Paulo beyond 2022.

Jaxson Paulo - The young outside back gets first shot at the centre spot vacated by Dane Gagai at the end of last season. The Rabbitohs are keen to retain the 22-year-old, who played 12 games for Souths last season.

Josh Mansour - Mansour is now in the twilight of his career and he is very much playing for his future at the club in coming weeks. His chances of securing a new deal will be dictated by how he plays early in the season.

Herbie Farnworth - The Broncos face a fight to hold onto Farnworth and the interest isn‘t just from their near neighbours the Dolphins or other NRL clubs. It is understood the English rugby union - where former Broncos coach Anthony Seibold is on Eddie Jones’ staff - is keeping an eye on Farnworth.

Corey Oates - A former State of Origin player, Oates has become a fringe player at the Broncos and it is safe to say this could be the most important year of his career. At 27, there is still time to turn his career around but as it stands, it is hard to see him staying at the Broncos. 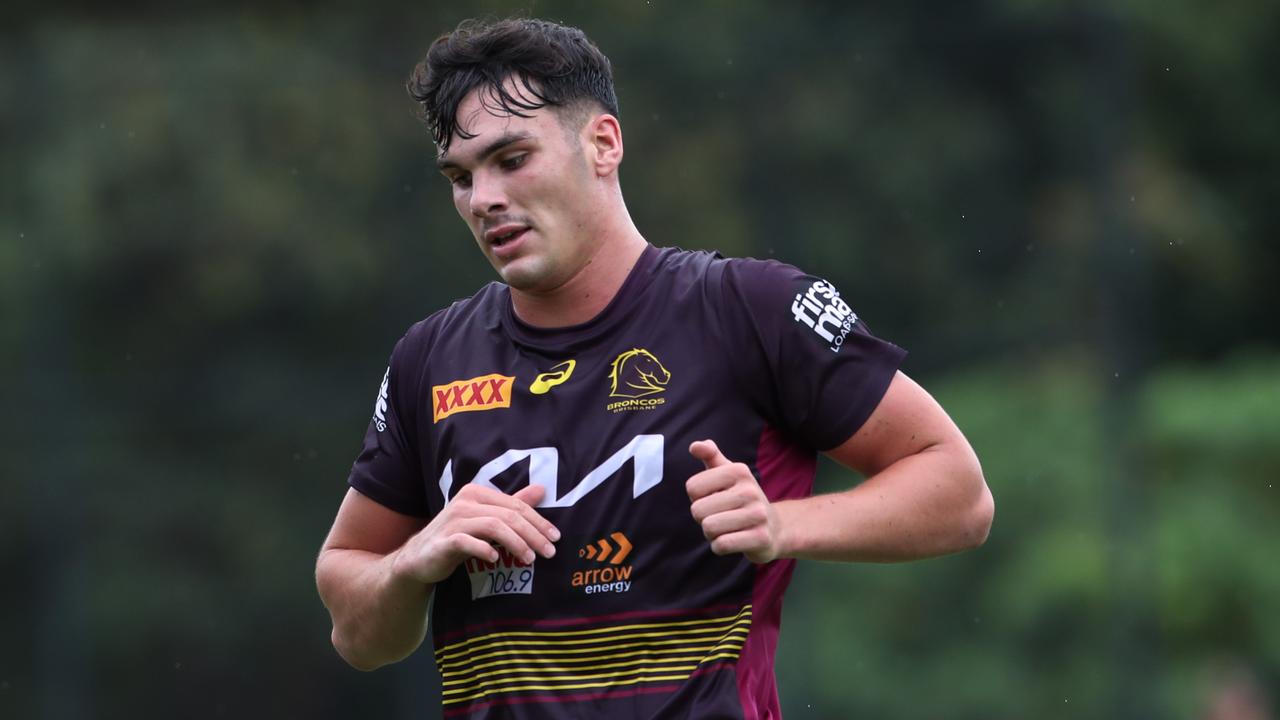 Will Herbie Farnworth stay in the NRL or head to rugby?

Kevin Proctor - There was talk that Proctor reached out to the Dolphins, where good mate Jesse Bromwich has signed for next season. The interest wasn‘t reciprocated and Super League looms for the Kiwi international.

Jarrod Wallace - Like Proctor, has been linked with the Dolphins and the smart money suggests that is where he will end up. Still only 30.

Jordan McLean - McLean went to Townsville regarded as arguably the best front rower in the game but he hasn’t lived up to the billing, in part because injuries have slowed him down. Needs a fast start to the season to earn a new deal.

Jeremiah Nanai - One of the most coveted teenagers in the game, Nanai has clubs queuing up to take him from the Cowboys. North Queensland are desperate to keep him but the Dolphins, Wests Tigers and Newcastle are among the clubs circling. 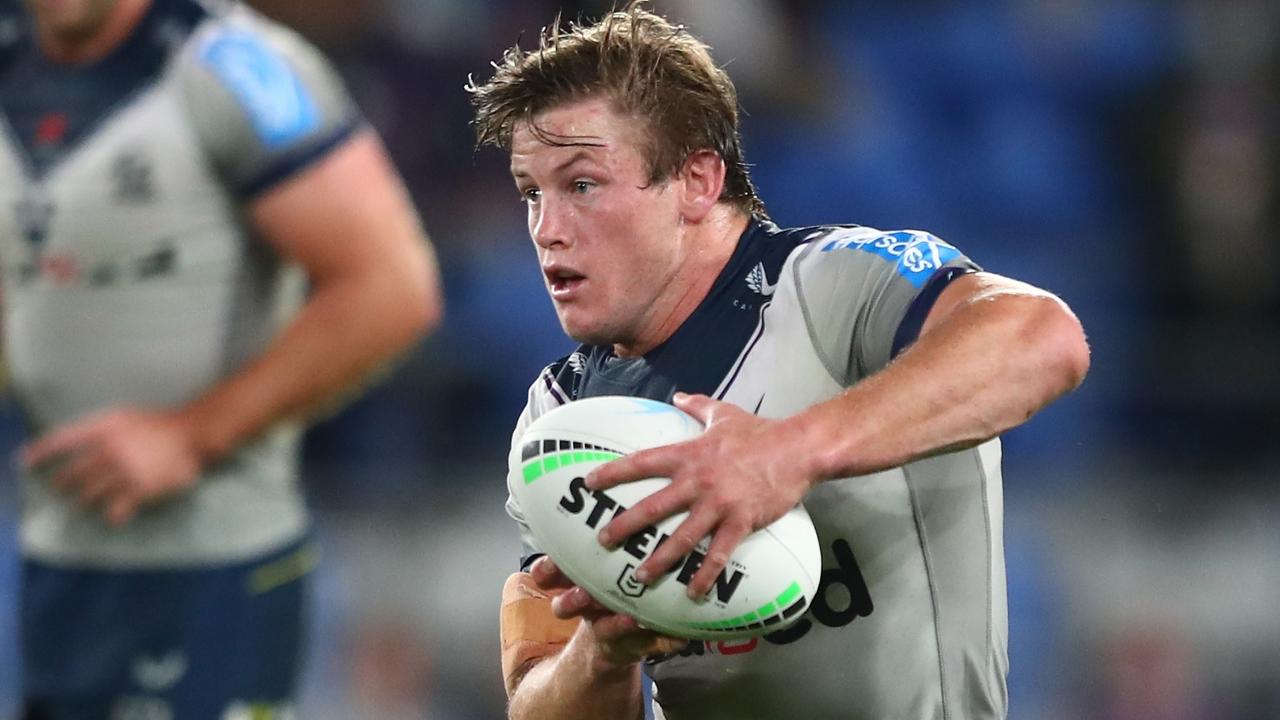 Harry Grant has a club option and will probably stay with the Storm.

Harry Grant (club option) - Grant would be on the wishlist of nearly every team in the NRL should he hit the open market but the Storm are unlikely to let that happen. They have an option in their favour which they will take up.

Tui Kamikamica - The bullocking forward is currently sidelined because he is facing assault charges. His future at Melbourne, let alone any other NRL club, will hinge on the outcome of that case.

Matt Lodge (player option) - Lodge‘s future is in his own hands and there have been suggestions he would like to move back to Sydney with his young family. He has plenty of time to make a call.

Relieved English recruit hasn’t run into ‘maniac’ Madge ... yetThink big: Why there should be no limit to Eels ambitionOld heads helping to usher in new era at Dragons

Kodi Nikorima - Nikorima left the Broncos to join the Warriors and there have been whispers he would love a permanent move back to south-east Queensland. A fast start to the year would help his cause.