NRL 2022: South Sydney pile on the points against the Warriors

Latrell Mitchell and Cameron Murray combined to guide South Sydney to a thumping victory over the Warriors posting an important boost to South Sydney for-and-against.

Latrell Mitchell missed three golden point field goals last week but a suite of sensational plays by the fabulous fullback either side of halftime against the Warriors rocketed a rampant South Sydney into sixth position on the ladder.

Captain and spiritual leader Cameron Murray turned in a red-hot display for the ages to ensure the Rabbitohs were at their ruthless best in a 48-10 win against the woeful Warriors at a sold out Sunshine Coast Stadium.

Last week Mitchell was disappointed he wasn’t able to ice the clash with the Sharks, but he put that well and truly behind him with two tries and a personal haul of 24 points before being given an early mark with 18 minutes remaining. Latrell Mitchell was dominant for the Rabbitohs. Picture: NRL Images

“I wanted to get Blake [Taaffe] some footy and we’ve got two six-day turnarounds and it was an opportunity to take him off and make sure that he is one hundred per cent ready for the big games ahead,” Rabbitohs coach Jason Demetriou said of Mitchell’s early mark.

“He is nowhere near where he is going to be by the time we hit finals, and that is the exciting part. “

Murray had three try assists and a linebreak inside the first 20 minutes. That’s when Mitchell put the foot down and brushed through the teeth of the lamentable Warriors defence to score and then unfurled a cracking pass for Alex Johnston to notch his 159th try and move to equal ninth on the all-time list with Hazem El Masri and Matt Sing.

Souths led 36-6 at halftime against a Warriors outfit that are now officially the Rabbits’ bunnies. The Rabbitohs have now scored over 30 points in their past five games against the Warriors, equalling a feat against one club that they last achieved against the North Sydney Bears from 1917-19.

Latrell is just too strong in broken play.

“Cameron Murray is the key ingredient in this side. Today he is red hot,” Billy Moore said on Fox League of the Rabbitohs skipper.

Rarely has a player dominated an opening to a match this season in such as fashion. The Rabbitohs led 24-0 after 21 minutes and Murray was the catalyst, setting up tries for Lachlan Ilias and Tevita Tatola and steamrolling through for Damien Cook to do the rest.

Throw in a bell ringer on Dallin Watene-Zelezniak that led to a Souths try and it was a perfect performance either side of the ball. Murray left the field late with an HIA but it looked on the minor end of the head knock scale. 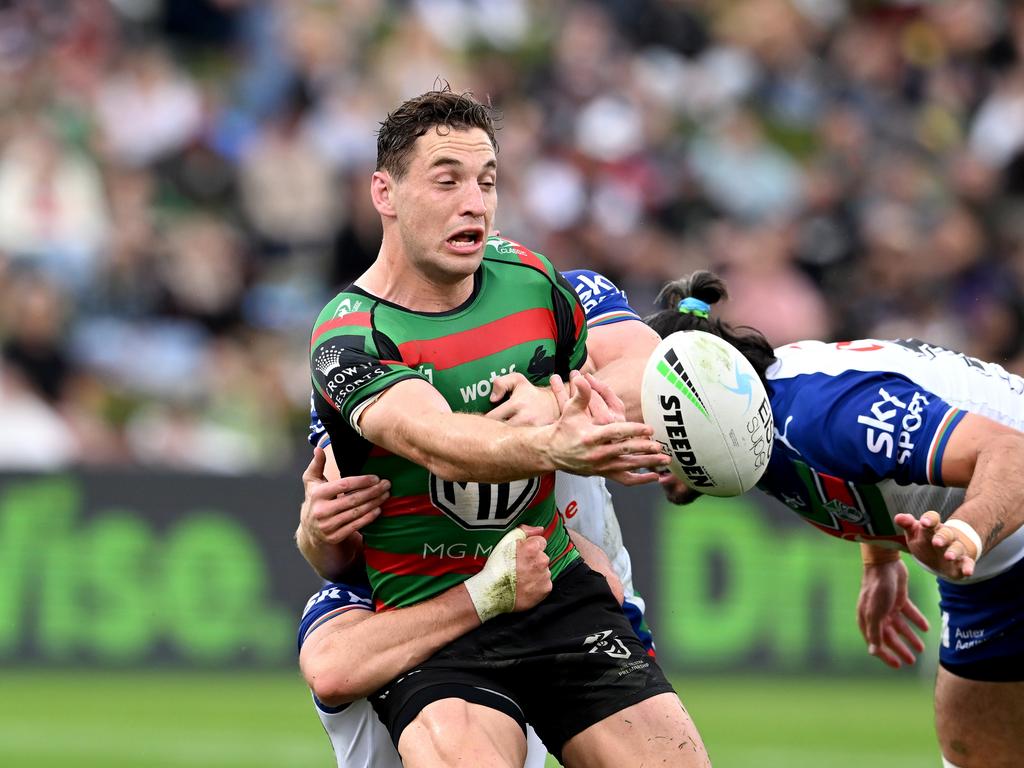 Mitchell hasn’t played finals football since the 2019 grand final when he went back-to-back with the Roosters. Injury and suspension counted him out of finals footy with the Rabbitohs the past two seasons and he will be salivating about the prospect of doing something special in September. South Sydney have the Eels, Panthers, Cowboys and Roosters in the next four games and a top four spot is in their grasp if they can play at their best.

Mitchell will be front and centre of that quest.

“It is on us,” Demetriou said of the Rabbitohs’ top four hopes.

“We’ve got some big games and some aspirations about how we want to finish the season. You can see [the spine] connecting better. This is their fourth game together since round five. If we can keep those guys together at the back end of the season we will be hard to beat.”

Mitchell gave 25-year-old debutant winger Izaac Thompson an afternoon to remember with a no-look pass for a try. Thompson, who spent four years out of the game, has been a try scoring and tackle bust revelation in NSW Cup and more than confirmed that reputation in the big time.

The Warriors could not have played much worse.

“Since I’ve taken over in this role that is probably the most disappointed I’ve been,” Warriors coach Stacey Jones said.

“I thought our attitude to defence was terrible. We are living out of a suitcase but we’ve got four weeks to go and we’ve got to show a lot more than what we did tonight.”

Originally published as NRL 2022: South Sydney pile on the points against the Warriors