The Dragons may have solved their fullback conundrum after Cody Ramsey produced a breakout performance in the key role in a tight victory over the Warriors.

St George Illawarra may have finally cracked their fullback code after Cody Ramsey produced a breakout performance in their thrilling 24-18 over the Warriors.

Playing his first game of the season in the No.1, Ramsey scored a sensational solo try, set up another, and racked up a career-high 149 metres as the Dragons snapped a two-game slide.

Having experimented with Tyrell Sloane and Moses Mbye through the opening 10 rounds, coach Anthony Griffin went with Ramsey at the back in Kogarah.

And the 22-year-old responded with arguably the best outing of his burgeoning career.

It was a fitting display from the merger club, who held a memorial for the late Johnny Raper. 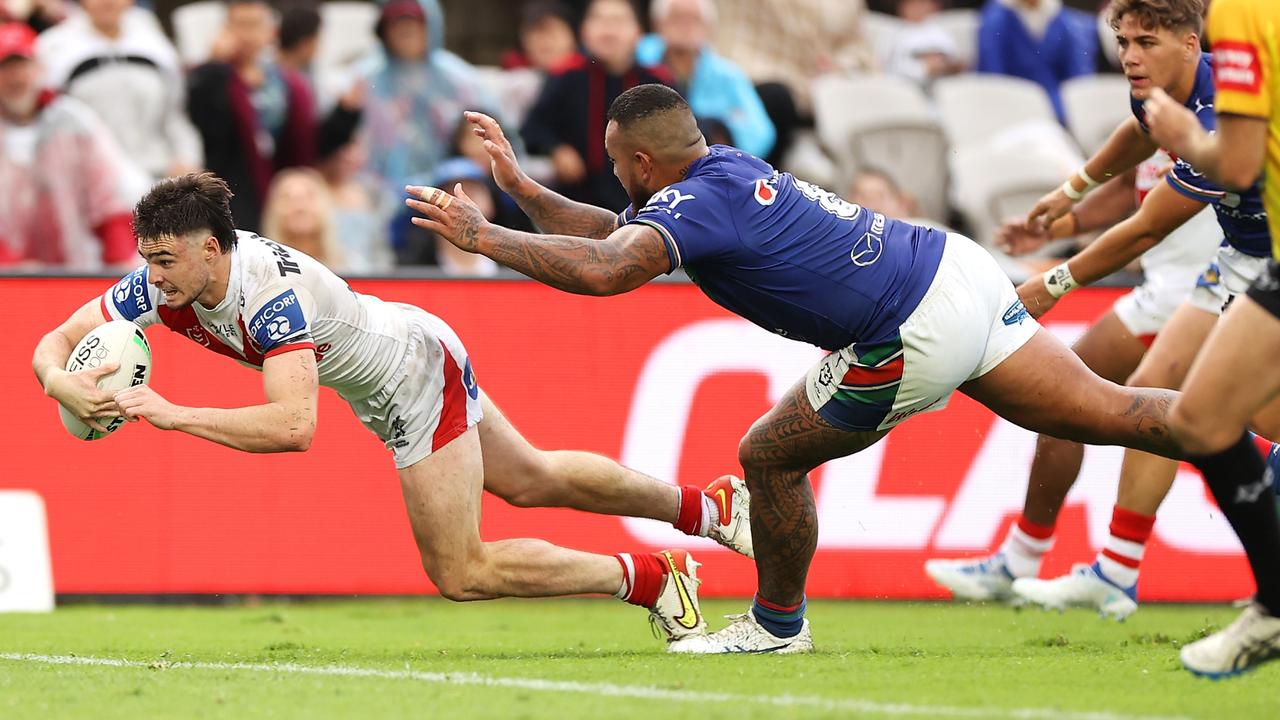 Cody Ramsey starred for the Dragons against the Warriors. Picture: Mark Kolbe/Getty Images

The game could have gone either way in the second half, with both teams having several chances to ice the match, but it was goal kicking that proved the difference.

Leading 14-12 at half-time, a brilliant dive into the corner for Dallin Watene-Zelezniak set the tone for a high pressure second half.

Having extended their lead to eight points, the Warriors then conceded two tries in five minutes to trail 22-18.

The following 20 minutes was arguably the most entertaining football of the weekend.

Both teams dug deep in defence, and a brilliant in-goal team effort from the Dragons to avoid conceding a drop-out resembled a maul from the 15-man game.

When Adam Pompey was dragged over the touch line with six minutes left on the clock, the Dragons had the field position to seal the win.

But more dogged Warriors defence kept them out.

A 40m Lomax penalty goal with 10 minutes on the clock sealed the win, consigning the Warriors to their fifth defeat in their past six games. Griffin admitted his players were probably a little lucky to come away with the win.

The coach said despite scoring with their first use of the Steeden, he felt the Warriors “jumped” his players in the first half.

“We got that first try, but from then on we spent most of the game defending our own end,” he said. “A lot of it was our mistakes … errors and penalties, high tackles.”

Coming off an 89-minute golden point loss against the Titans in Magic Round, Griffin said they showed the same fight to win this week having not been rewarded for it last week.

“I was most impressed with the second half,” he said. “The game was going against us and we had to wrestle it back and we did. I thought they showed some real fight and courage – which we showed last week and we didn’t get the result.”

Griffin said the emotion of losing last week was tough on players.

“It’s a really good sign for us – the fact we kept coming in the game, and got what we wanted,” he said. A memorial for immortal John Raper, who died in February, seemed to pump up the Dragons, who immediately had the first attacking opportunity after Shaun Johnson spilled the kick-off.

The Warriors looked to have the set covered but failed to clean up a grubber in-goal, allowing Lomax through to score his second of the year.

Despite the early error, the Warriors were easily the better side in the first half – particularly between the 10-minute and half-hour mark.

The Warriors were unlucky to only score two tries.

Despite this, the Dragons defended strongly and took their only other serious opportunity of the match when Ramsay carved through for his first of the season.

A try to Shaun Johnson and two to Viliami Vailea saw the Warriors hit the break with a 14-12 lead.

Warriors coach Nathan Brown said he didn’t believe either side were any better or worse, and conceded Reece Walsh’s poor kicking cost them the game.

“It was four tries apiece – it was a 50/50 game. We could’ve kicked a couple more goals but that didn’t happen,” he said.

“It was probably the best our ruck defence has been all year. We had some blokes who played some terrific footy, but we also had two or three players that made some bad choices … and we gifted them a couple of tries far too easy.

“Four tries should be enough to win most games.”

Dragons No.4 Lomax put in his best audition for a Blues jersey, making several key tackles to go along with his first-half try.

While Tom Trbojevic was widely expected to play in the centres for Origin, the elbow injury he sustained against the Eels on Friday night has blown the battle for the spot wide open.

Lomax kicked four from five and scored two tries. He also had 73 run metres and made nine tackles.