The St George Illawarra Dragons slim final hopes appear to be over after a tough loss to the Sharks on a night in which Tariq Sims was once again sent to the sin bin.

Tariq Sims may have played his final game for St George Illawarra after a sickening high shot left Cronulla winger Connor Tracey needing to be stretchered from the field.

Sims was lucky to not have been sent-off for the high tackle which left Tracey knocked out before he hit the ground. The veteran Dragons forward was sin-binned for the swinging arm just 11 minutes into the game with the scores at 6-all.

The match was halted for more than five minutes as Tracey lay prone on the ground. He was ruled out of the rest of the game but joined to watch the game from the interchange bench.

While Sims was lucky not to have been instantly dismissed, he now faces an anxious wait if he will play for the Dragons again. Tariq Sims of the Dragons is sent to the sin bin after a high tackle on Connor Tracey. Picture: Matt King/Getty Images

Sims was a dejected figure as he waited to learn his fate.

“We all respect Tariq,” Dragons skipper Ben Hunt said. “He is a good man. If that was his final game for the Dragons that would be very disappointing.”

It was the third time the veteran back-rower has been sin-binned this year. He spent 10 minutes in the bin twice during the Dragons round 17 loss to Brisbane.

Sims was sidelined for one match for the two incidents but now he is facing his third ban. The NRL match review committee will decide Sims’s fate on Sunday. The 32-year-old’s career at the Dragons is winding down before the joins the Storm next season.

Dragons coach Anthony Griffin said he would have to “there was always a chance” Sims was about to be sent-off. Connor Tracey of the Sharks receives assistance after being hit high in a tackle by Tariq Sims. Picture: Matt King/Getty Images

“I would have to have another look at it,” Griffin said. “It was something the referee thought warranted a sin bin. The second half was his best half of football.”

With just four regular season matches left, Sims will be sweating on a favourable charge. A grade two charge careless high tackle charge will result in a three game ban with an early guilty plea but a grade three will spell the end of his St George Illawarra career with the Dragons out of finals contention.

“I am not sure (if he should have been sent off),” Fitzgibbon said. “He did drop pretty low.”

Sharks skipper Wade Graham said “it did not look great”.

The scientific calculator says they are still a mathematical chance of making the finals, but you can just about put the red pen through the Red V after the Dragons failed to breathe fire in a 24-18 defeat to the Sharks on Saturday night.

The Dragons are now four points outside the top eight but they’re effectively three wins behind the Roosters given their for and against is a diabolical -130.

“It’s tough now,” coach Anthony Griffin replied when asked if he thought his side could still make the finals.

“There’s only one game that matters now and that’s next Sunday. We’ve got to dust ourselves off.”

And they might want to consider banning one fan for life after he and a mate entered the field of play in the final minute when the Dragons were about to pack an attacking scrum.

St George Illawarra had all the momentum but that was lost as security chased down the offenders who were caught at the other end of the field. The Dragons’ struggles in attack were perfectly encapsulated when Moses Mbye ran into his own player and dropped the ball close to the line several plays later moments after Zac Lomax had narrowed the margin with a clutch penalty goal.

St George Illawarra’s attack is a real concern and seems to have gone backwards. It is slow, lacks inspiration and is far too reliant on Ben Hunt.

The night started with two dropped bombs – the first leading to a Nicho Hynes try – and it was another spilled kick by Tyrell Sloan with 15 minutes to play that ended any hopes of a comeback when Wade Graham strolled over to make it 24-16.

St George Illawarra’s meek attack was summed in the minute before half-time when they attacked Cronulla’s like just after Blayke Brailey had been sent to the sin bin for two ruck infringements in the space of five seconds.

They had ample opportunity to pick holes through Cronulla’s defence but instead settled for a few crash plays that were easily handled before Jaydn Su’A grubbered straight to debutant Kade Dykes who was collected high by Jack Bird.

To make matters worse, veteran Tariq Sims has probably played his last game for the club after the Storm-bound forward knocked out Connor Tracey with a sickening high tackle but somehow wasn’t sent off.

“If that was his final game for the Dragons, it would be very disappointing,” skipper Ben Hunt said. PUT THE WHISTLE AWAY

We’ve heard way too much about short whistles lately.

Now it’s the early whistles causing all kinds of problems. And the common denominator? Ashley Klein.

In his first game back after he was dropped for the howler in the Bunker that cost the Tigers two competition points, Klein came up with a couple of strange decisions that cost the Sharks at least one try.

The veteran referee bizarrely rescinded a six again call after he incorrectly awarded a set restart when the Dragons were coming off their own line and should’ve been given a penalty.

But that wasn’t the end of it. Klein blew play dead for an alleged Siosifa Talakai knock on even though replays weren’t conclusive.

It denied Mulitalo a four-pointer after he streaked away down the left sideline. The Bunker may have awarded the try, but we’ll never know because play was blown dead.

The same thing happened later in the second half when Nicho Hynes was penalised for a ball strip but challenged the decision and won. He would have scored a crucial try at 18-16 if play had been allowed to continue. 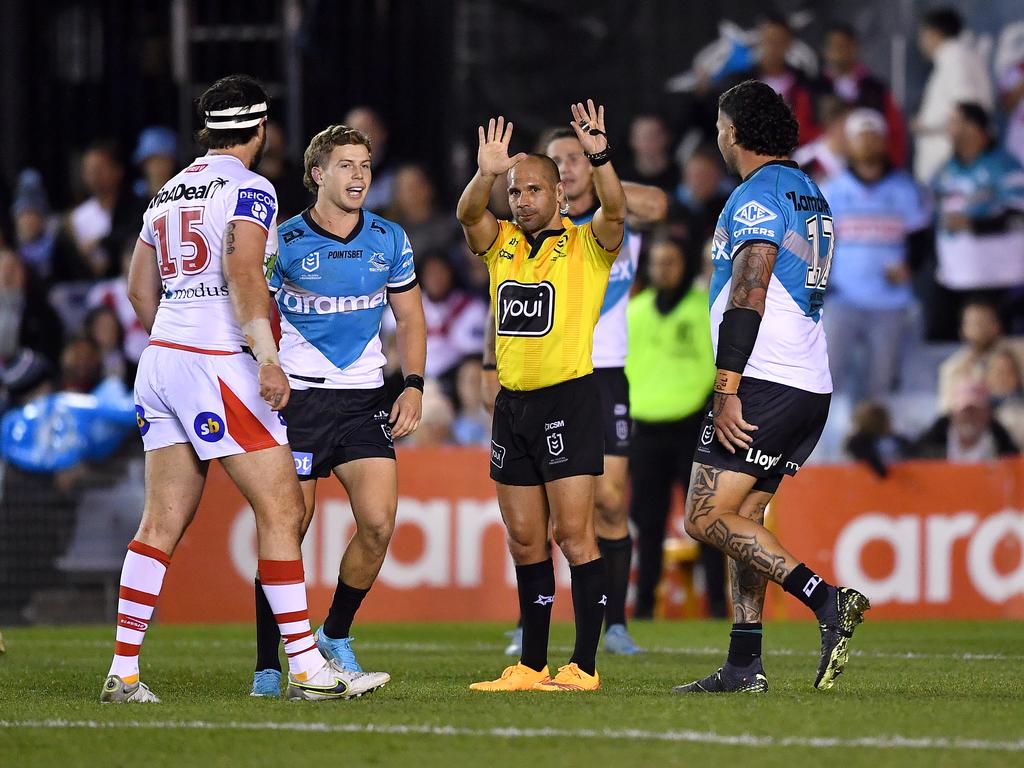 Blayke Brailey of the Sharks is sent to the bin by Ashley Klein.

Losing Matt Moylan to a quadriceps complaint before kick-off could have derailed the Sharks who were already missing fullback Will Kennedy to a serious ankle injury.

But they have a quality option in Braydon Trindall who again stepped up in the halves with a couple of clutch plays.

He followed in Hynes’ footsteps to slice through some feeble defence for his first try of the season and then put Teig Wilton into a hole to score with his first touch of the evening.

“It was a really handy replacement, Craig Fitzgibbon said.

“He knows his role and his place in the team so we had confidence even without Matt that Tricky would be able to get it done.” Braydon Trindallwas superb after being called up to start in place of Matt Moylan. Picture: Matt King/Getty Images)

It didn’t have the memorable moment that Sharks fans were hoping for, but Kade Dykes will never forget his NRL debut.

The local junior became a third-generation Shark, following in the footsteps of his dad, Adam and grandfather, John, who both pulled on the jersey.

Kade made a couple of errors and could have scored a slashing try but was unable to reel in a pass from Mulitalo after a midfield break.

His performance summed up the Sharks who had some nice moments but also dropped too much ball and lacked polish in attack, but at least they’re back up to third and looking good for a top-four finish.

“It would’ve been a sensory overload for the kid,” Fitzgibbon said.

“It’s a big event. I knew he wouldn’t get overawed.”