The Dragons’ Anzac Day win has come at a huge cost with a trio of stars nursing potentially severe injuries, plus the latest on Daine Laurie in our CASUALTY WARD.

As impressive as Monday’s result was, the Dragons could be without several key players for their next game against the Wests Tigers on Sunday.

The biggest concern is Jack Bird who overcame what appeared to be a serious lower-leg injury but did not return in the second half because of a reported broken arm after he was smashed by Joseph Suaalii.

Backrower Jaydn Su’A couldn’t put any weight on his right leg after his ankle was caught under the weight of Jared Waerea-Hargreaves, while Moses Suli battled on but was clearly hampered by a leg injury. 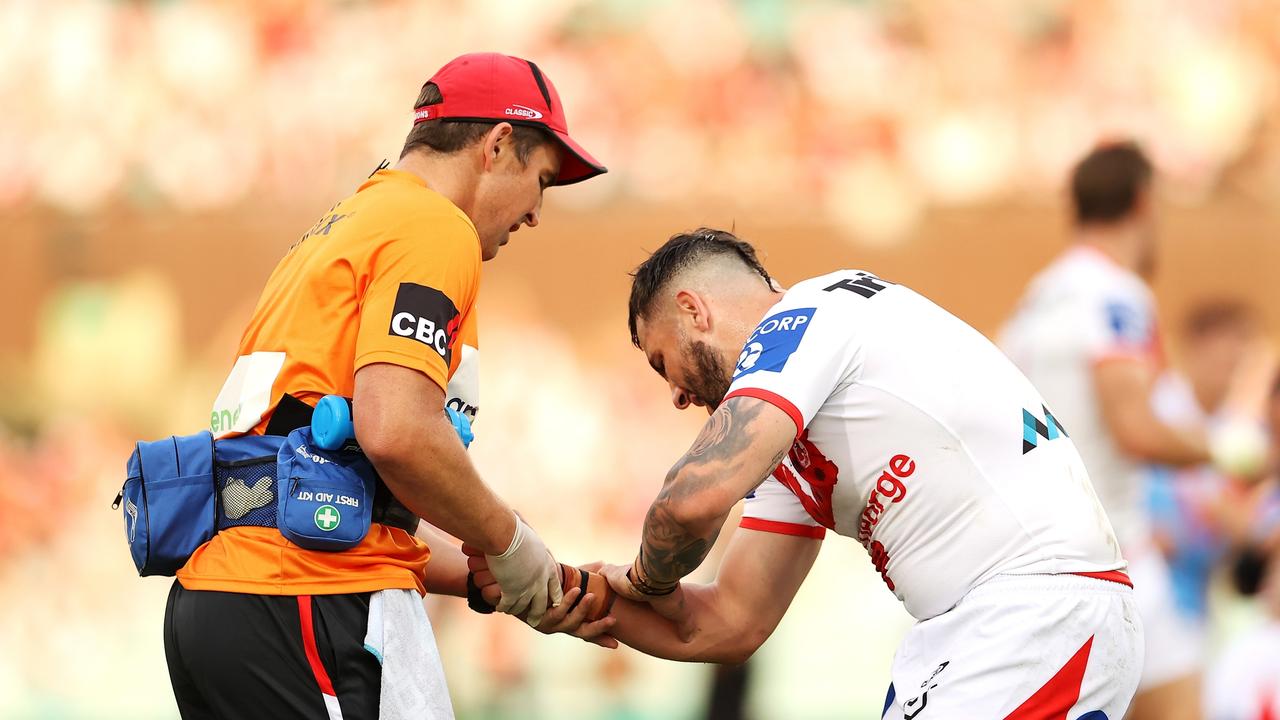 In a blow that comes after the Tigers shocked the Rabbitohs to make it back to back wins, scans revealed Laurie sustained a grade two MCL tear and could be out of action for up to six weeks.

Coach Michael Maguire is expected to hand the No.1 jersey to Starford To’a after the young gun switched from the centres to replace Laurie following the injury on Saturday night.

To’a said he was comfortable at No.1 after playing the entire second half of the match at fullback.

“There are things I can do more to get involved when I’m playing fullback,” To’a said. The reshuffle caused by the injury could see Oliver Gildart returned to the starting side as a centre.

Benched for the clash against the Rabbitohs, Gildart played almost 40 minutes of the clash after Laurie’s injury forced a backline reshuffle.

Gildart, however, could be overlooked for James Roberts, should the veteran be cleared to return from the ankle injury that ruled him out of last week’s clash.

The Tigers will be out to make it three wins in a row when they take on the Dragons on Sunday.

Maguire admitted that back to back win had given his side the confidence they were lacking at the start of the year.

“The pleasing part was being able to back up what we have been doing,” Maguire said.

“We said a few weeks ago that we weren’t far away and the belief around the place continues to grow after a performance like that.

“We have put a lot of work in and the belief and confidence has grown. What I have seen over the last a month is how the group has really galvanised.”

Jake Simpkins is expected to be available for selection this week.

Payne Haas looked in big trouble when he came from the field in the opening 10 minutes of the Broncos Round 7 game, clutching at his shoulder after his first run off the kick off and never looking quite right from that point on.

He was able to return and play out the game with the aid of a painkilling injection, with the early diagnosis being a grade 1 AC joint sprain. Payne Haas picked up an obvious shoulder issue early against the Bulldogs but managed to return to the field. Picture: NRL Photos.

Thankfully players commonly play through AC joint issues, as there is minimal risk of permanent long term damage. The main challenge is getting pain under control to allow the shoulder to function, which shouldn’t be too much of a challenge with a minor sprain.

Unless scans show more severe damage than first thought the expectation would be for Haas to play next week with the aid of pain killing injections and/or padding.

Andrew Davey also suffered a suspected AC joint injury in Manly’s loss to Cronulla, though he was removed from the game almost immediately with the expectation currently he will miss at least next week. He came down heavily and unsupported on his shoulder, which is a typical way to suffer an AC joint sprain. The likelihood here is that the damage is beyond a minor sprain and he could be looking at 2-4 weeks recovery. Injuries seem to be coming in pairs this week, with Taniela Paseka going down with a suspected MCL injury. His seemed the most significant injury of the weekend so far, with a moderate sprain likely being best case. Hopefully Manly can have him back in 3-4 weeks, but they could be looking for a replacement forward for as long as 2 months if a complete tear is present.

Dylan Walker and Will Kennedy failed to finish the Thursday night game with knee and shoulder injuries respectively. Both players have carried ongoing concerns in these joints for weeks and aggravated the existing issue during the game. It’s tough to assess the severity of ongoing issues at the time, with their recovery over the coming days along with scans to guide their expected recovery times. 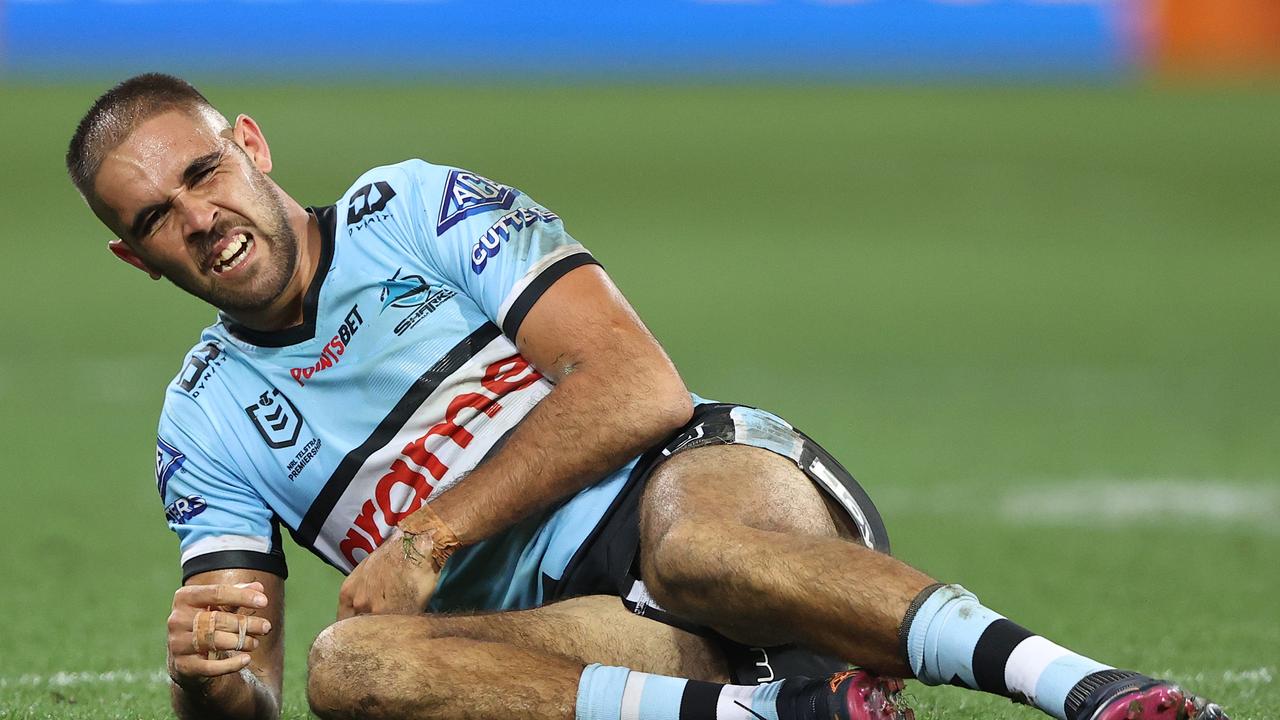 The run of shoulder injuries continued, with William Kennedy also in some doubt for Round 8. Picture: Getty Images.

Jacob Host was in significant pain as the half time buzzer sounded in the Rabbitohs match up with the Tigers, and he failed to return after the break due to a dislocated shoulder. Thankfully the joint was able to be reduced, or “popped back in”, at the ground. Prognosis here has a wide range of possibilities:

- if there is minimal structural damage to the joint and it is functionally stable, rehab will be trialled for 3-6 weeks in an effort to avoid surgery for now and play out the season with it heavily strapped or with a brace

- if there is significant damage to the joint and it appears it will be unstable moving forward then immediate reconstruction surgery will be required due to the risk of further/permanent joint damage, which comes with a recovery time of 3-6 months

Even if Host is able to avoid immediate surgery and trial rehab in the short term, in many cases surgery will still be required post season to repair the shoulder joint. Elliott Whitehead was ruled out during the week after a big collision at training left him with a nasty facial laceration and shifted front teeth. He required surgery to stitch up the facial cut and realign his front teeth, and while he wanted to play a few days is not enough healing time to allow for a safe return to contact sport. He is likely to be available for the Raiders next week.

The Sea Eagles could be without a near entire starting forward pack to face South Sydney next Friday but five-eighth Kieran Foran insists the side is not “panicking”.

Paseka and Walker were injured during Thursday’s loss to Cronulla. Back-rower Andrew Davey (shoulder) is also expected to join them on the sidelines. Paseka will miss at least a month while there are fears Davey may need surgery. To compound their woes star back-rower Haumole Olakau’atu is facing a one game ban after he was charged for his high tackle on Cronulla’s Aiden Tolman which resulted in Olakau’atu spending 10 minutes in the sin bin.

The careless grade two high tackle charge means Olakau‘atu will be suspended for two games if he fights the charge and loses.

Foran said the club’s depth was being tested.

“We’ve picked up a few in the last two games,” Foran said. “We seem to have a few blokes going down at the moment.

“They are not too serious but they are injuries keeping guys out for a few weeks. Also been hit with guys going down with Covid-19. There’s been disruptions. Most clubs are getting used to now. Taniela Paseka was forced from the field with a knee injury and could be out for some time. Picture: Getty Images.

“Our depth is better this time around. The guys coming in are more ready than what they were last season. We are showing that. There isn’t a panic around the injuries. We have this belief that anyone that comes in and has to fill a hole will do a good job.”

The Sea Eagles will have to turn to the likes of Kurt De Luis, Ben Trbojevic and James Roumanos to fill the void.

Foran said the side did well to regroup after a shocking first half where they conceded 32 unanswered points.

“There was a howling wind that we ran into,” Foran said. “We had to stem the flow of tries better than what we did. Had we walked in at halftime 16-0 down knowing we had the wind would’ve been a big confidence booster.

“As disappointing as the first half was the fact we were able to go out there and give ourselves a chance of winning and not let them go on with it was something that we should be proud of. We showed fight and respect for the jersey.” 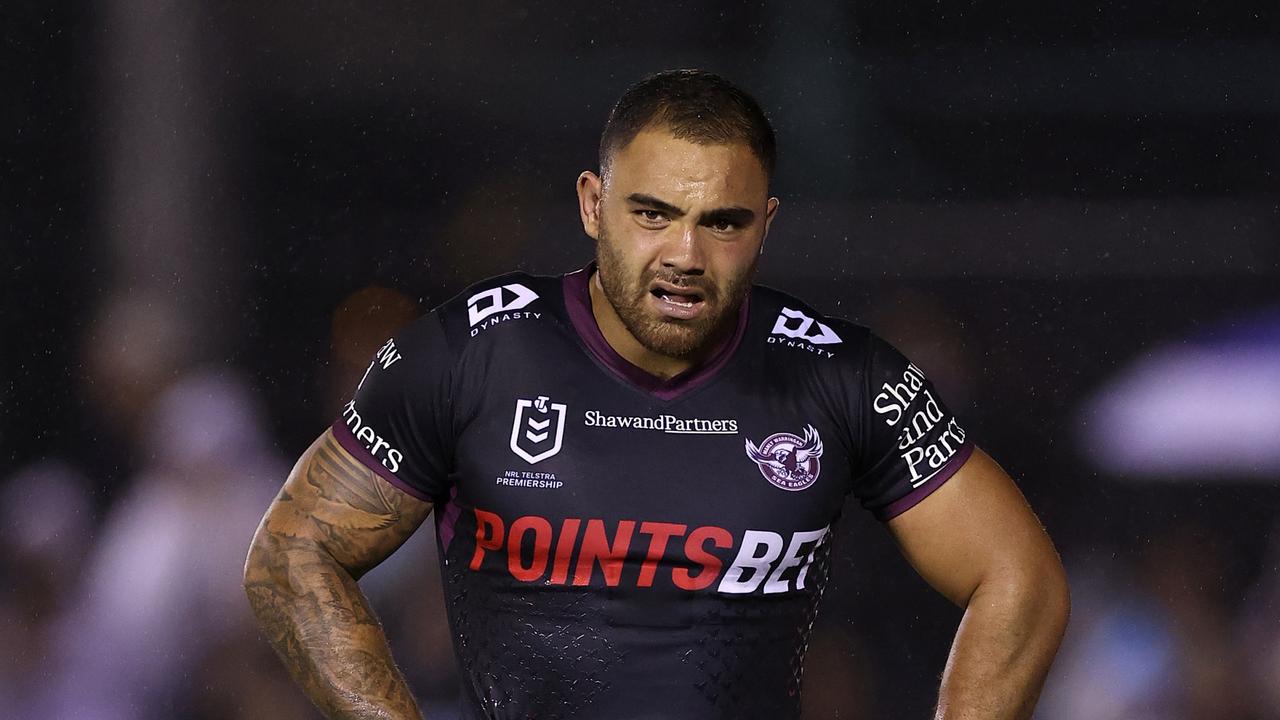 Dylan Waker has impressed in his bench utility role for Manly but is set to be out for Round 8. Picture: Getty Images

Meanwhile, the Sharks are sweating on the fitness of fullback Will Kennedy.

Kennedy failed to finish the match as he deals with an ongoing shoulder issue. He was in doubt in the lead-up to the match against Manly but took to the field.

If he is missing fill-in captain Nicho Hynes is expected to shift to fullback with Braydon Trindall playing in the halves.

The Sharks play Brisbane on Thursday.