The Raiders have finally overcome their second-half fades to secure their fourth win of the season, but a sickening high shot could see their skipper suspended.

Sharks winger Sione Katoa will be wishing the sun never came out at Suncorp Stadium.

Katoa had a nightmare afternoon underneath pinpoint Matt Frawley bombs in a phenomenally brave 30-10 win by the Raiders who had three players sin-binned and were down to 11 men during the second half.

The Sharks had 60 tackles inside the Raiders 20m zone, most of them in the second half, but Canberra lifted to a man.

“I know what it is inside that jumper and we saw that. I was really proud of that effort,” Raiders coach Ricky Stuart said.“It was courageous. It was a very tough win.”

The hapless Katoa was unable to see the ball on two occasions in the first half as he shielded his eyes from the rays after two days of relentless rain. It would be unfair to blame Katoa for Cronulla’s loss. They were awful and the switch of Nicho Hynes to fullback was a flop. The Raiders were sensational, completing 20 of 21 sets in the first half and taking a deserved 20-0 lead into the break despite losing Charnze Nicoll-Klokstad to the sin bin.

Canberra’s second half was a backs-against-the-wall display of heroic proportions. Corey Horsburgh was binned for a professional foul and then Elliott Whitehead joined him when his shoulder knocked Dale Finucane senseless. The Sharks, who had beaten the Warriors with Will Kennedy sent off the previous week, were only able to breach a defiant green wall twice in the sin bin periods. 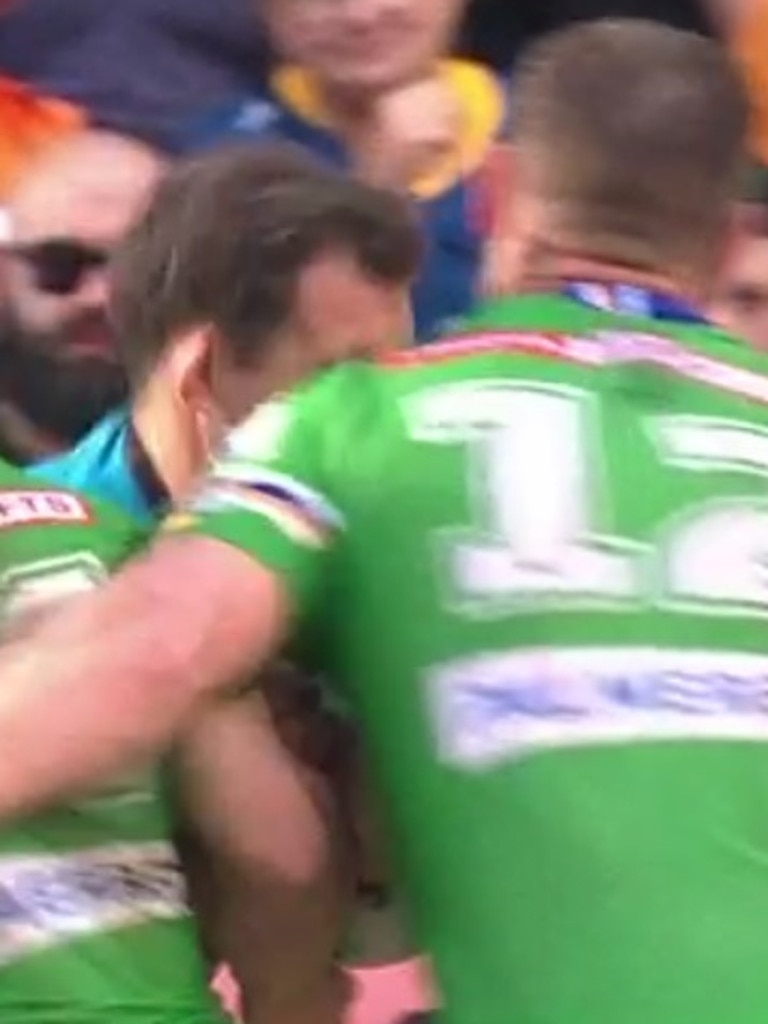 Raiders skipper Elliott Whitehead was sin-binned for the shot and could be facing a stint on the sidelines if suspended. Picture: Getty Images.

It was an afternoon to remember for 25-year-old rake Zac Woolford, son of Raiders legend Simon Woolford, who set up a first try and the clincher for half Brad Schneider before Hudson Young capped a stellar game with a runaway try at the death.

“I was very happy for Zac. It was the responsibility of all of us to make his first game a memorable one and I’m sure he will remember this one because he had a wonderful contribution,” Stuart said.

Hynes, moved from half to fullback to compensate for the loss of Kennedy to suspension, had an unhappy afternoon at fullback. Cronulla lacked direction in the halves with Matt Moylan and Braydon Trindall unable to take control. Hynes, who is hoping to grab the number 14 jersey for the NSW Blues, had a great record at fullback with the Storm but the Sharks don’t have Cameron Munster and Jahrome Hughes in the halves and were unable to take advantage of their numerical advantage. 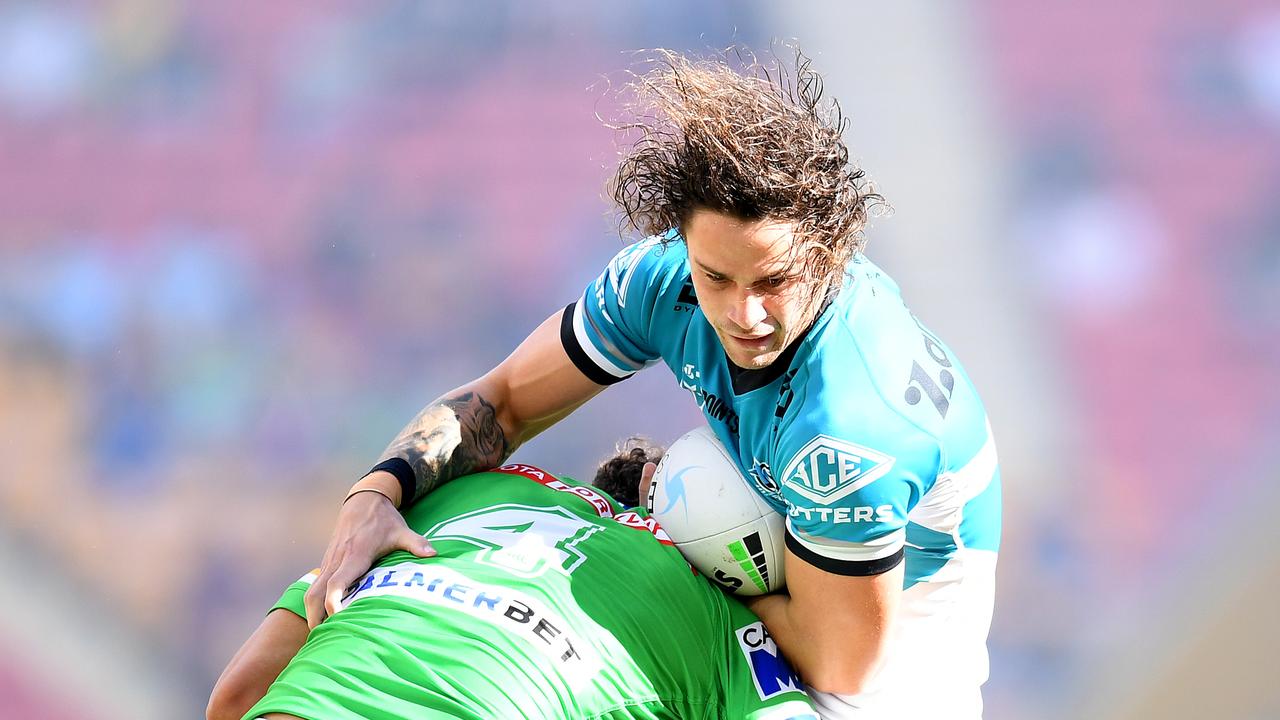 The Nicho Hynes fullback switch clearly backfired, as the Sharks attack struggled to score points, despite having the numbers advantage. Picture: Getty Images.

Hynes said he would have to lift if he stayed at fullback and added the Sharks would rally around Katoa.

“Everyone has those days. Unfortunately today Sione dropped a few but he has been unreal for us. He’ll be better for it and will learn from it,” Hynes said.

“If I going to stay at fullback I am going to have work harder no matter who is at the back or in the halves. I probably didn’t put my hand up too much today. [The playmakers] needed to combine better. It wasn’t working for us but we’ll be addressing that.”

Raiders prop Josh Papalii, who turned 30 on Friday, had an entourage of 40 family and friends on hand with their ‘Papa’ shirts in the stands to watch the Raiders legend. He didn’t disappoint, charging over from close range to give the Raiders a 12-0 lead. Playing his 249th NRL game for the Raiders, Papalii has been one of the side’s best and was enormous in high humidity alongside his front-row partner Joseph Tapine who celebrated his 150th NRL game in style. With State of Origin just around the corner Papalii’s form is a huge boost for the Maroons who will need all their big guns firing on all cylinders.

Private training sessions with the son of a rugby league legend has emerged as the circuit-breaker to Matt Moylan’s best start to a season in four years.

Training more than he ever has, Moylan’s “day-off’ sessions with Justin Lang, the son of former premiership-winning coach John Lang, is a stunning about-face given the Sharks playmaker’s inability to train over consecutive days just 12-months ago.

Confidence and brutal honesty from Sharks coach Craig Fitzgibbon is also being attributed to Moylan’s strong season with Cronulla so far. Matt Moylan puts his improved form and fitness down to smarter decisions off the pitch. Picture: Bradley Kanaris/Getty Images

Ahead of a Sunday Magic Round clash with the Raiders, Moylan is aiming to play 10 consecutive games for the first time since 2018 - the same year, when at five-eighth, he helped steer the Sharks to within 80 minutes of a grand final.

Moylan has spent the past three seasons hampered by calf and hamstring issues.

They not only impacted his physical output, but mentally, his confidence to trust his body took a beating.

In one-on-one meetings prior to Fitzgibbon’s arrival at Cronulla last year, the coach met offsite with Moylan and challenged him to alter his mindset and attention towards training and preparation.

The ensuing attitude-shift from Moylan was enough to convince Fitzgibbon the 30 year-old was worth signing to a one-year deal over keeping former half Shaun Johnson.

With the blessing of the Sharks high performance staff, Lang has kept Moylan ticking along on his days off with a schedule of pilates, hip mobility exercises, passing and grappling drills.

“Before we started back in November, Fitzy and Pickles (Sharks head of high performance Nathan Pickworth) floated the idea of working with Langy to me,’’ Moylan said.

He signed and gave away his boots to two of these kids, who were beyond stoked.

Then he signed another ladâ€™s jersey and said â€œyou want the rest of the boys to sign it as well?â€ and took him into the sheds to get it signed. #NRLSharksWarriors#NRLpic.twitter.com/UuIp8jEiXO

“Our training and what I’ve been doing with Langy has been working for me and I’ve really enjoyed it.

“I’m training more than I ever have.

“I’m trying to eat better and cut down on nights out. I haven’t really been out at all.

“I’m making smarter decisions with what I’m doing off the field.

“I go in on days off and it’s just that little stuff that I need to do outside of Sharks to be able to be ready to train and put my body in a position to be able to cope and play and train each week.

“I feel like I’m building my form nicely and able to train and work hard.’’

Managing 11, eight and 15-games respectively over the past three seasons, Moylan’s confidence in his body has returned at a time where he has formed a lethal combination with halfback Nicho Hynes. Matt Moylan had been restricted to just 34 games over the course of the past three seasons. Picture: Zak Simmonds

Off-contract at the end of this season, Moylan said his desire was to stay at the Sharks alongside Hynes while laughing-off any assertion that his strong from was due to his need to secure his future.

“I was off-contract last year as well,’’ Moylan pointed-out.

“I definitely want to stay. I’ve enjoyed my time here, obviously it hasn’t always been good times with a few injuries and from that dropped my form.

“But I feel like there’s still plenty of footy left in me and I’m confident with where the club is headed and feel like I can still offer a lot.

The future kings of the NRLMarket Watch: Panthers star knocks back new deal

“I’ve loved working with Fitzy and what he has brought to the club.

“The hard work-ethic that he has instilled in the playing group and the confidence he’s shown in giving me an opportunity here is why I’m trying to repay him and the club.’’