The women’s State of Origin clash provided another thrilling match between the Sky Blues and Maroons.

There were plenty of influential players on the night in front of a record crowd in Canberra.

Find who starred on the big stage? All 34 players rated below.

The reigning Dally M medallist scored a try, threatened, busted tackles, dropped a bomb, dropped an f-bomb (in her halftime interview) then returned after oranges to do it all again in the second half. Outstanding game for the rugby convert who re-signed with St George Illawarra this week. Emma Tonegato scored an impressive try in a strong performance at the back. Picture: Mark Nolan/Getty Images

No going back to sevens now for Tonegato. Sheâ€™s rugby league to the bone. https://t.co/NGm2ope1Va

Been a big year for the Scone schoolteacher who won an NRLW premiership, married Knights Old Boy Adam Clydsdale days later and now has an Origin series win. One big error but strong in attack.

Nicknamed Winx, Sergis stars almost as often. Outstanding with ball in hand, the primary school support teacher made huge yards through the middle. Exciting times now too for her young students, who this went sent the Blues star a card reading: Miss Sergis when are you coming back? We miss you!

According to the Fox Sports Lab, ran for 192m – or more than 70m more than any other woman on the field – while also making 11 tackle busts, three offloads, a line break, 12 tackles, no misses and zero errors. Also scored the match winner. Perfect? Geez, it was close. Tough night for the Sydney beautician who dropped a bomb that gave Queensland a try and ran for just 36m. Still, undoubtedly much bigger things ahead for the prolific NRLW tryscorer who has signed a two-year deal with Parramatta.

Missing from the NSW side for two years, the exercise physiologist made a strong return to the representative arena. Scored a brilliant solo try in the first half and produced a solid kicking game.

Only four years ago this Hay tradie was selling raffle tickets at her local pub, foot in a moon boot, when she saw a Jillaroos game on TV and thought, ‘yeah, let’s give it a crack’. Got burned for a try but was in plenty else and was great with the boot. 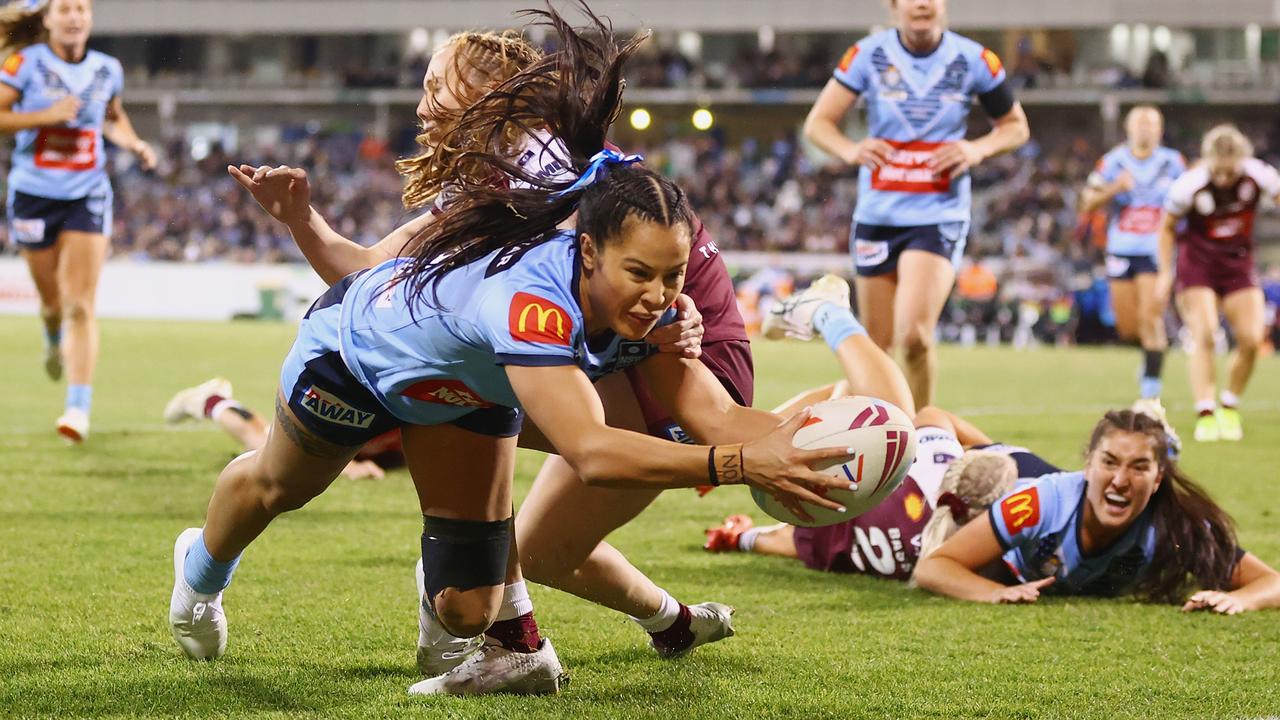 Tiana Penitani had a try disallowed on a mixed night for the winger. Picture: Mark Nolan/Getty Images

Run for 125m, or more than any other player on the field. But, c’mon, what were you expecting from a Parramatta prop who can squat 188kg? As always, the Mounties Sponsorship manager worked her clacker off.

Typical Energiser effort from the Wollongong personal trainer and incumbent Jillaroos No.9. Grubbered perfectly for a first half try to Tonegato, continually schemed around the ruck and was also huge defensively.

No guesses as to why Newcastle have shelled out $100,000 for the partner of fellow Knights recruit Adam Elliott. Just as you would expect an athlete who finished SAS Australia, Boyle dominated the opening 20 minutes and was solid again on her return. Millie Boyle got the Sky Blues on the front foot with a powerful opening stint. Picture: Cameron Spencer/Getty Images

Shows all the traits expected of a NSW Origin mainstay and daughter of a south coast dairy farmer. Made more tackles than any other player on the field, including some crucial ones.

Not a lot of time for the Indigenous All Star but, regardless, a massive effort to be a State of Origin winner after missing selection last year.

Nicknamed Psycho, and plays accordingly. Worked hard underneath that white headgear for the time that she was out in the middle. Solid off the bench, but limited time thanks largely to the huge game of Davis.

Limited opportunities for this Roosters premiership prop who was awarded the Karen Murphy medal on NRLW Grand Final Day.

When the Blues had an opposed session against the Canberra Jersey Flegg side this week, somebody asked how hard the boys should tackle. At which point somebody motioned towards Johnston and said not to worry about too much. Young Newcastle prop brought a wonderful dose of crazy for the Blues.

Massive effort to be part of Origin after just hirst year of NRLW with Roosters. Tall backrower got limited time off the pine but is headed for far bigger things. Caitlan Johnston was strong up the middle for the Sky Blues. Picture: Cameron Spencer/Getty Images

Huge game from the fullback who the Newcastle Knights have shelled out $100,000. Continually looked most likely to cause trouble for NSW

Brisbane rookie nudged out Queensland favourite Karina Brown for the spot and enjoyed a solid, if unspectacular night, tried hard.

Strong attacking effort from the athlete who has the Olympic rings tattooed on her arm. Scored a great try to keep Queensland in the game with 12 minutes to play. One of Queensland’s favourites, had a tough assignment up against Isabelle Kelly. Who starred.

Ranked among the fittest players anywhere in the NRLW, this Australian Defence Force product was seemingly everywhere for much of the game and appeared to have scored the match winner before being ruled off side.

While she may only stand just 167cm tall, Aiken’s standing as one of the game’s quickest was on display when she burned Pearson for a first-half try. With a dozen minutes to play, it was the Maroons five-eighth there again – offloading impossibly at the tryline. 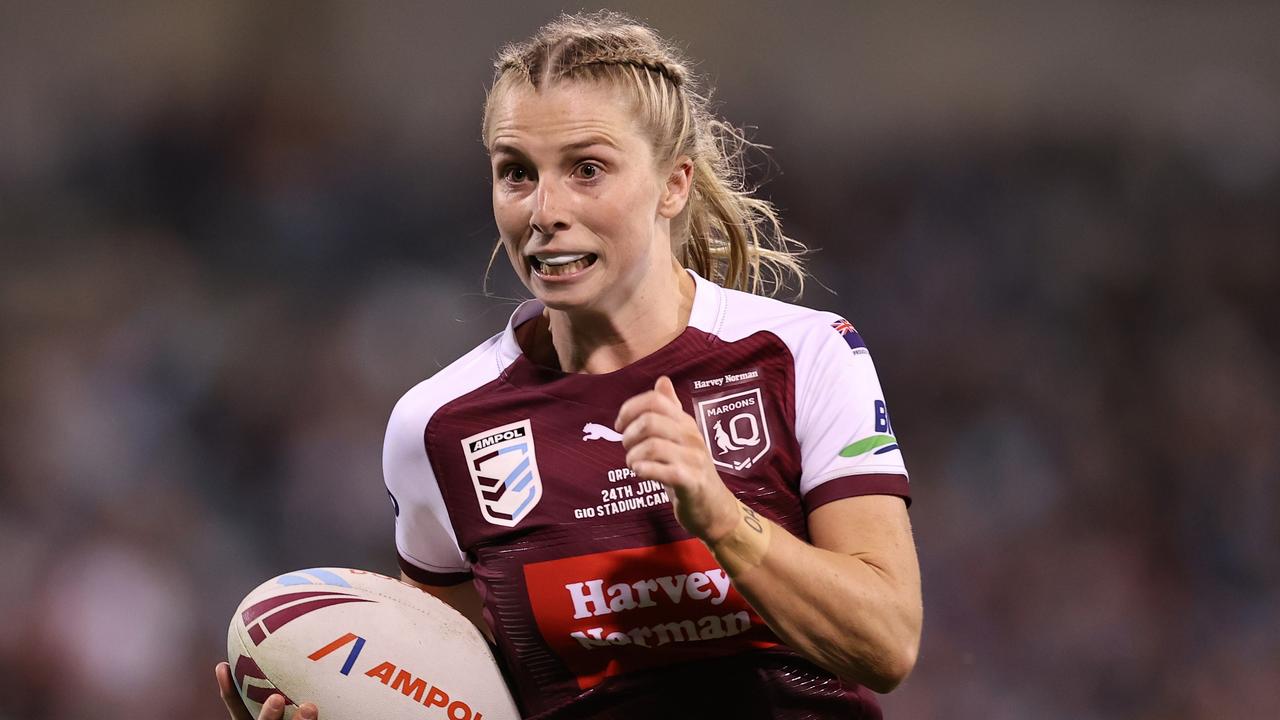 Tarryn Aiken dashed over for an excellent solo try in the first half. Picture: Cameron Spencer/Getty Images

As expected of a player widely regarded as the GOAT, came up with several big plays, including a towering bomb that would eventually saw the Maroons called back for offside. Also had two goalkicks hit the posts

Tried hard early but struggled to get her usual signature offloads away. Also came up with an error close to the tryline. Still, ran for 99m which was the most of any Maroons forward.

Unable to play in this game last year because of work commitments, the Maroons hooker made a solid return to the representative arena, including a couple of big defensive plays. Massive effort to even make Origin after only playing one game for Titans this year before injuring her knee. Worked hard in the middle.

Player of the Game in Origin last year, Jordan Rapana’s sister didn’t quite reach those same heights this time around. But having already played with four NRLW clubs, you can see why plenty remain keen on her services.

Nicknamed The Wombat, this 19-year-old wrecking ball ran hard and tackled harder, with her technique surely leaving some blues nursing the same coloured skin when they wake today. Undoubtedly, a player of the future Versatile Broncos utility, worked as hard in defence as you would expect a Queensland forward who also happens to run a dog walking business.

Big effort in attack from the Gold Coast hairdresser, whose day started long before kick off given every Maroon who wants her hair branded always goes to the 24-year-old Titan.

Despite having enjoyed more farewells than Farnsey, this 40-year-old Queensland legend was looking for one more fairytale farewell. Unfortunately got limited time because of a HIA.

Huge effort in the time she was on the field considering the backrower only celebrated her 19th birthday in Queensland Origin camp this week. 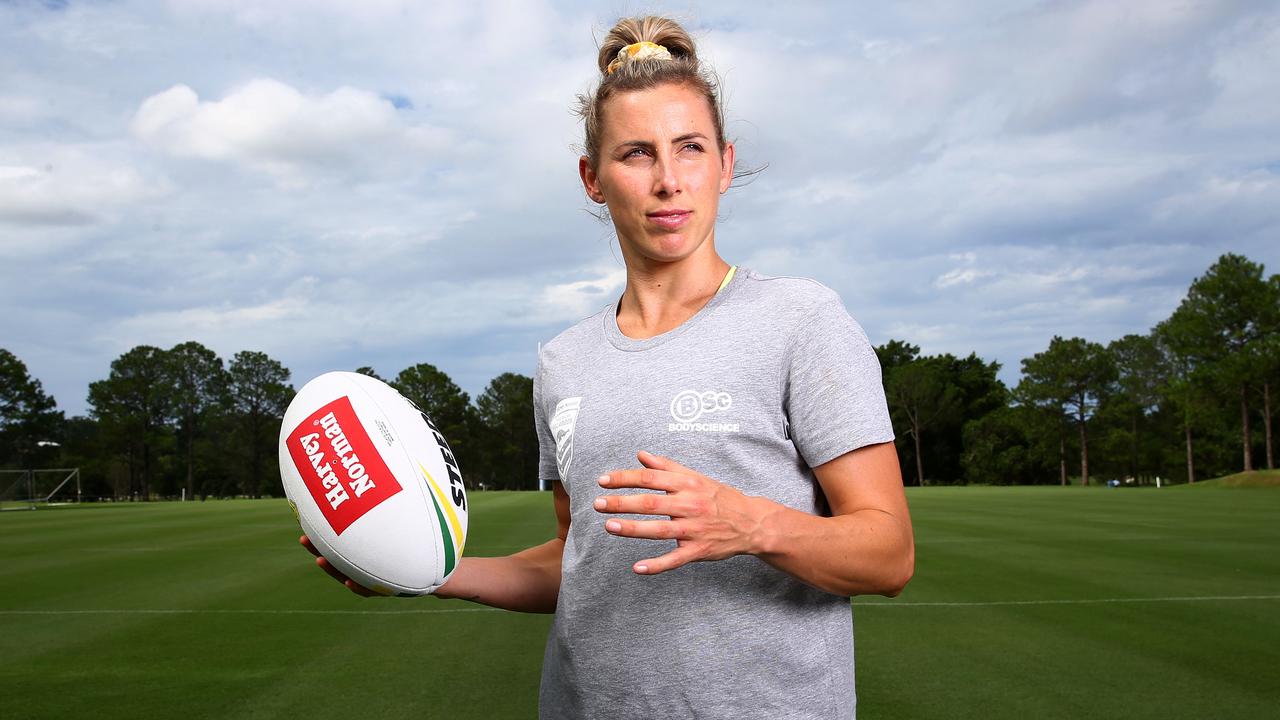 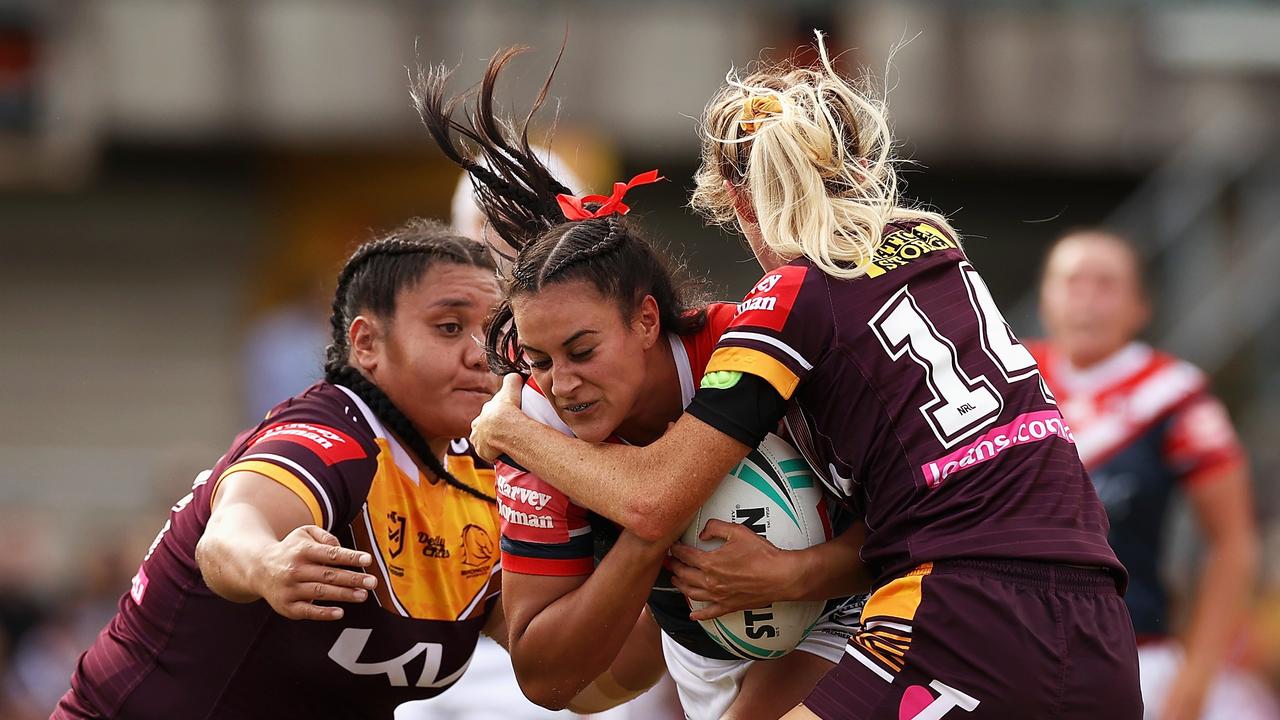 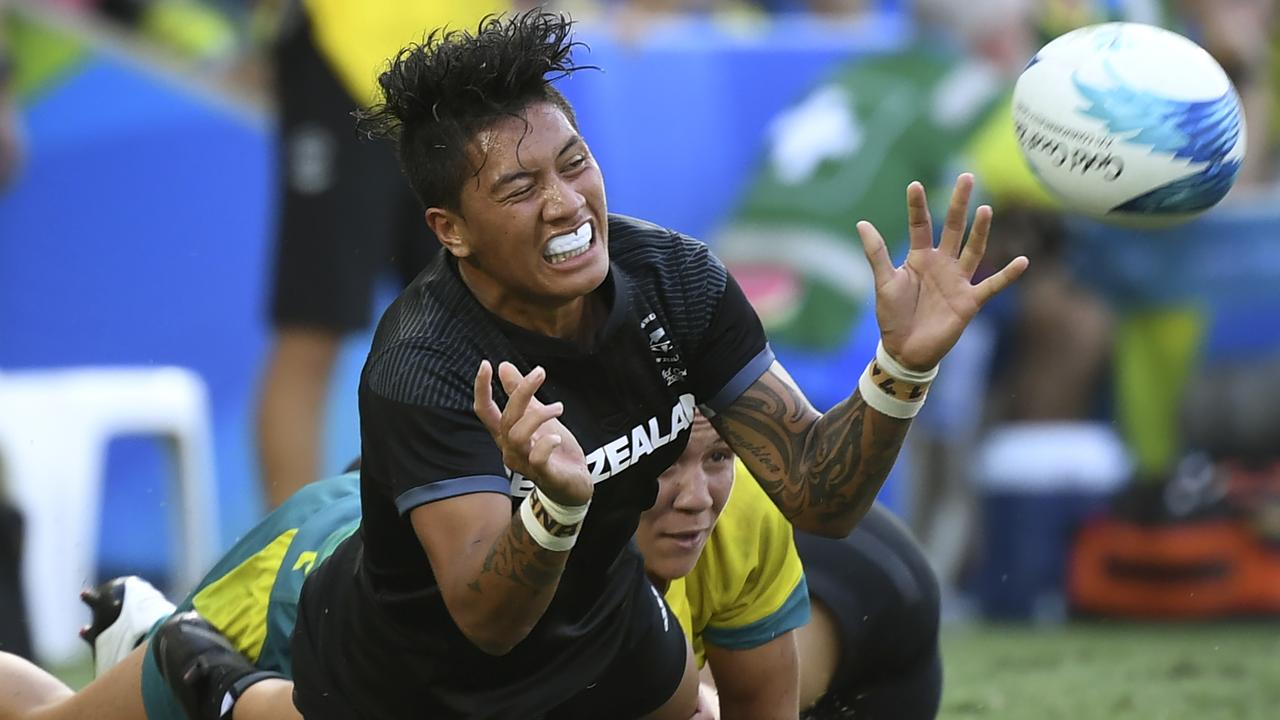