Billy Slater will blood another backline rookie while recalled Jai Arrow could keep Queensland’s Game One hero on the bench. FULL SQUAD AND LIKELY TEAM.

Queensland coach Billy Slater will blood another rookie with hulking Cowboys winger Murray Taulagi to make his Origin debut as the Maroons look to bury the Blues next Sunday night.

And Rabbitohs forward Jai Arrow has been recalled to the Queensland side to replace Taulagi’s luckless Cowboys teammate Reuben Cotter, who injured his hamstring in the warm-up in Friday night’s miracle win over Manly.

Queensland’s Game One bench sensation Pat Carrigan was tipped to be promoted for Origin II, but Slater is considering thrusting Arrow straight into the starting side to replace Cotter in the No.13 jumper.While Cotter could miss the rest of the series, the Cowboys have another new Maroon in Taulagi. The 23-year-old has been a revelation for the Cowboys this season, scoring nine tries from 14 games, and has impressed Slater with his 103kg frame, finishing ability and clever defensive reads. 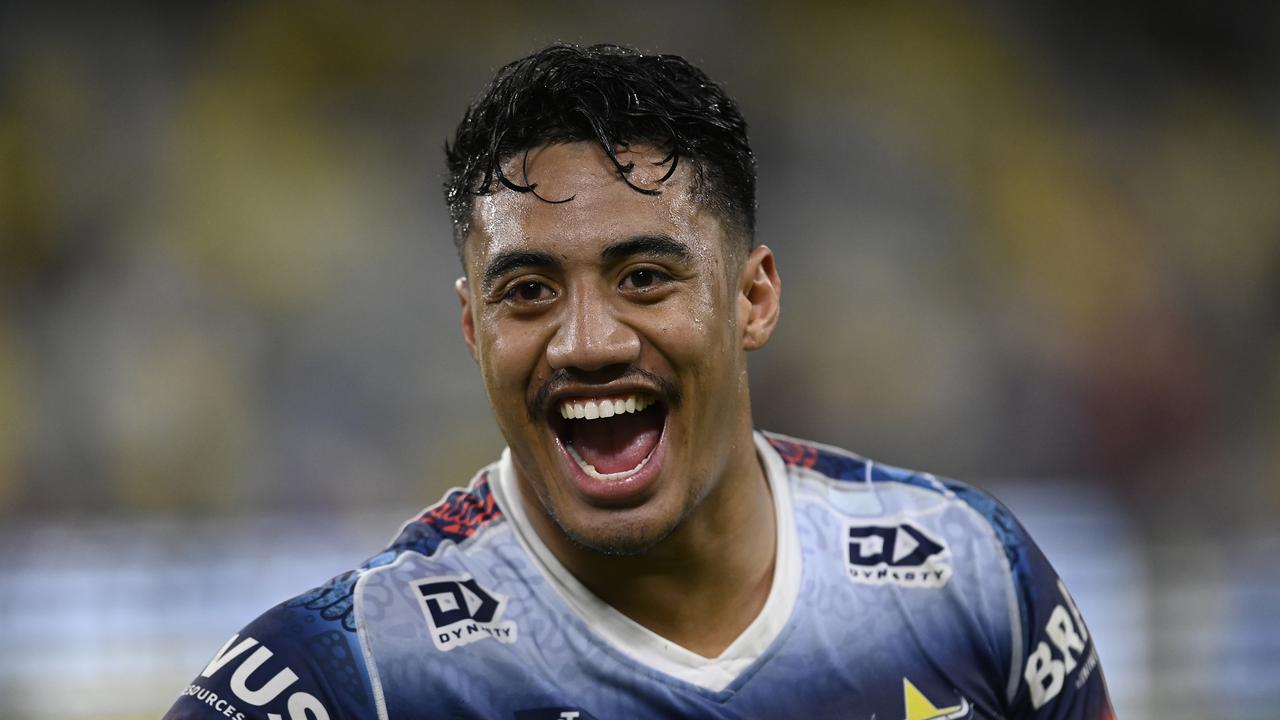 Slater was also looking closely at Tabuai-Fidow, who debuted for Queensland last year, only for ‘The Hammer’ to suffer a head knock against the Sea Eagles on Friday night.

The Queensland team for Origin II will be named on Monday and Cowboys coach Todd Payten believes Taulagi is ready for the code’s toughest arena.

“‘Muzz’ is doing great things for us,” he said following the Cowboys’ epic 28-26 comeback against Manly.

“He has taken his game to a new level and is playing really confidently.

“Muzz is a big body who is strong out of his own end. ‘Hammer’ (Tabuai-Fidow) is more about guile, finesse and speed.

“They are both good in the air, try-scorers and are both really good players.”

Injuries permitting in today’s games, Slater is expected to make only one other change to his winning 17-man squad, with Arrow to put the disappointment of his Origin axing last year when he returns for Game Two in Perth.

Arrow was banished from Camp Maroon in the lead-up to last year’s dead-rubber following a breach of Covid protocols.

He was then overlooked for selection by Slater for this year’s series-opener, won 16-10 by Queensland in Sydney, although he was a member of the Maroons’ extended squad. 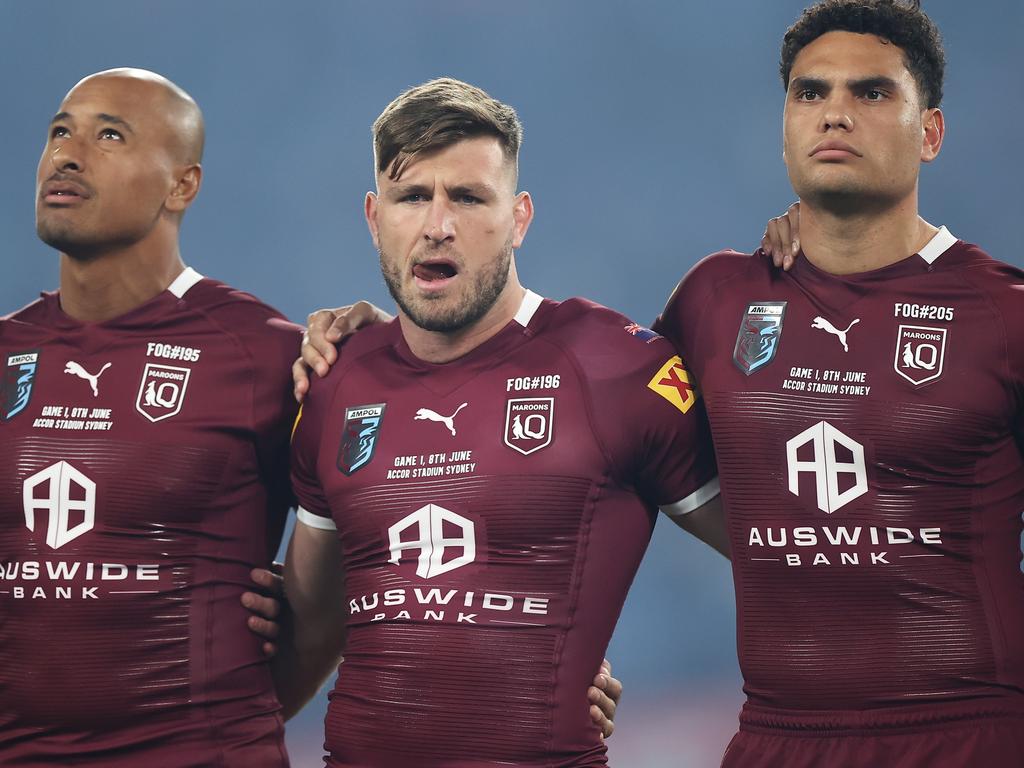 With Cotter suffering a hamstring injury that will see him miss the remainder of the series, the hard-working Arrow is back in a Maroons jersey.

And the South Sydney forward could yet start in the No. 13 following the devastating bench impact of debutant Pat Carrigan in Game One.

Carrigan was close to man-of-the-match honours with an incredible performance from the bench and Slater may look to retain that interchange approach in Perth.

While Carrigan will battle it out with Arrow for a starting spot in the Queensland team, his Broncos clubmate Kotoni Staggs is set to be axed from the Blues line-up for Origin II.

Staggs was well contained in his Origin debut in Game One and his night ended early in the second half when he left the field with a shoulder injury.

Staggs played soundly in Friday night’s 32-20 loss to the Storm, but it is understood NSW coach Brad Fittler is leaning towards blooding Matt Burton in a centre alliance with his former Penrith teammate Steve Crichton.

Staggs was picked in Tonga’s extended squad during the week and it appears the Broncos ace will be playing against New Zealand, not Queensland, during representative round this weekend.

Queensland officials have urged the NRL not to bow to pressure from NSW regarding the State of Origin officiating as head office finds itself under pressure to dump Ashley Klein when the series heads to Perth.

NSWRL officials have raised concerns regarding the performance of Klein in Origin I after coach Brad Fittler used his press conference to question the Maroons’ tactics in the ruck.

News Corp understands that there is a belief within the NSW camp that Klein allowed the Maroons to adopt a Melbourne Storm-like approach to defence, which stagnated the Blues attack. There is a push for Grant Atkins to control the second match, although it is unlikely the NRL will make a change.

That prompted a prickly response from Queensland Rugby League boss Bruce Hatcher, who said NSW’s desires should play no role in the appointment of the officials as the series goes on the line in the west.

“There is no logic in it,” Hatcher said. The Blues weren’t happy with Ashley Klein’s refereeing in Game II. Ashley Klein is likely to retain his spot as referee for Game II in Perth. Picture: Mark Kolbe/Getty Images

“That was a great game, a fantastic game. It flowed. We send teams out to play. You can’t have sides going and saying we don’t like him, we want someone else.

Fittler suggested Queensland had deliberately slowed down the ruck in Origin I, his claims no doubt filed by the presence of former Melbourne players Billy Slater and Cameron Smith on the Maroons coaching staff.

However, NRL head of football Graham Annesley used his weekly press briefing on Monday to demonstrate that Origin I was one of the fastest games of the year and there was no discernible difference between the speed of the play the balls between NSW and Queensland.

The game was played at a rapid-fire pace as Klein kept his whistle in his pocket. Atkins sat in the bunker.

The other referee in the mix to replace Klein would be Gerard Sutton, although the Blues have had long been frustrated when Sutton controlled matches previously.

Sutton’s brother Bernard was an advisor to the Queensland camp last year and has previously been involved with the Storm. NRL chief executive Andrew Abdo phoned Bernard Sutton last year to say that if he stayed on the Maroons’ coaching staff, it would be taken into consideration when head office sat down to select the referee for Origin.

Bernard Sutton stepped away from his job with the Maroons and Gerard was appointed to take charge of Origin. Gerard was overlooked along with Atkins for game one of this year‘s series in deference to Klein.

“It will be exactly the way it always is — the referees coaching staff will make a recommendation to the executive and we will consider that recommendation,” Annesley said.

“Our job is to select the best person for the job based on form and capability. Our only aim is for the game to be as entertaining as possible and for the best team to win regardless of who is appointed.“

Slater responds to big loss ahead of Origin II

Queensland’s Game One debutant Pat Carrigan is set to make his starting debut in Origin II with fellow Maroons rookie Reuben Cotter in danger of missing the rest of the series.

The Cowboys’ incredible come-from-behind 28-26 defeat of Manly was marred by the sight of Cotter hobbling off after straining his hamstring while warming up just minutes before kick-off.

Scans on Saturday confirmed the damage, with a grade-two hamstring tear ruling Cotter out of Origin II on Sunday, June 26 as Queensland shoot for a series win under rookie coach Billy Slater at Perth’s Optus Stadium.

Cotter will be sidelined for three to five weeks, with the worst-case scenario leaving him at long odds to be fit for Origin III at Suncorp Stadium on July 13.

Cotter was Queensland’s unsung hero in their 16-10 win in Game One, making 49 tackles and playing the full 80 minutes, but Slater has a welcome replacement in the equally industrious Carrigan.

The Broncos ironman had the game of his life off the bench in his Origin debut and is expected to slot into the Queensland No. 13 jumper.

That would leave a vacancy on interchange, with Carrigan’s clubmate Tom Flegler and Souths workhorse Jai Arrow likely to fight it out for the final bench spot.

Slater watched the Manly-Cowboys clash while in Melbourne commentating on the Storm-Broncos showdown for Channel 9 and was left to lament the loss of his defensive hardman Cotter. “Reuben not playing in that game was a concern for us,” Slater said.

“Reuben was a big part of what Queensland did in Game One so if he’s not there, it will be a big loss for us.”

Slater received another minor scare when Broncos stand-in skipper Kurt Capewell injured his knee against the Storm, but the Maroons back-rower said after the 32-20 loss: “I had a bit of a knee clash, but it was just a bump. I’m OK for Origin.”

Barring any further injury dramas, Queensland’s victorious side will be largely unchanged, although Slater must find a new left winger after Melbourne flyer Xavier Coates hurt his ankle in the series opener.

Cowboys young gun Murray Taulagi is tipped to edge out teammate Hamiso Tabuai-Fidow to make his Origin debut, but Brisbane veteran Corey Oates is also in the frame after a two-try display against the Storm. 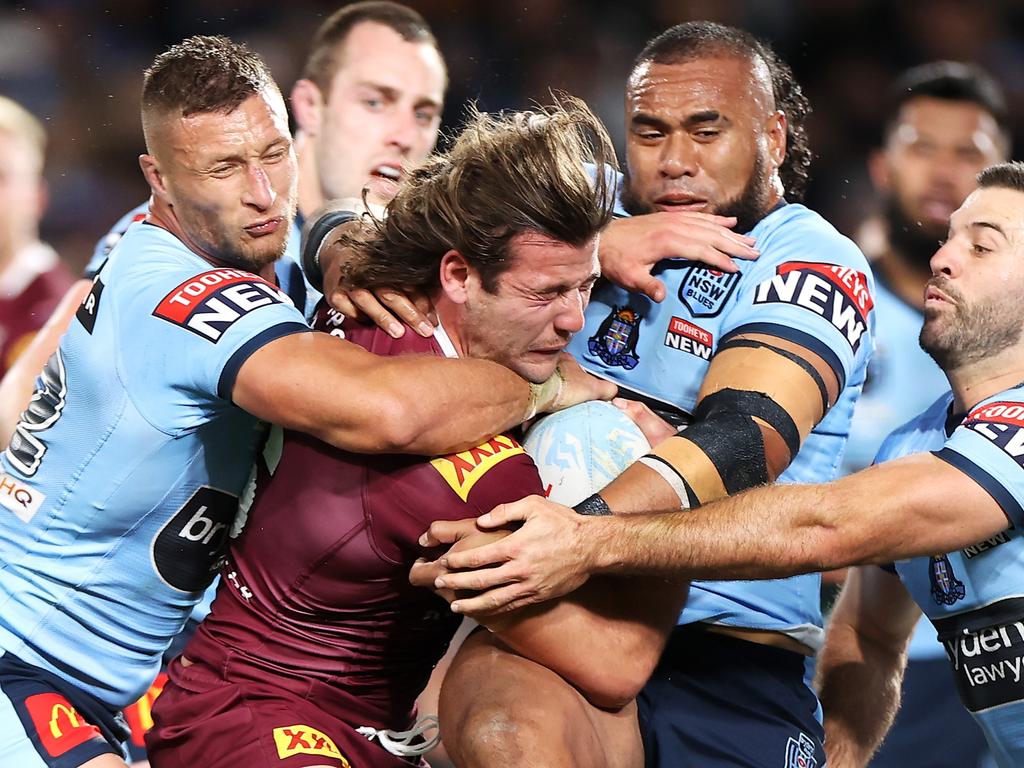 Patrick Carrigan gave the Maroons a huge boost off the bench in Origin I. Picture: Mark Kolbe/Getty Images

Taulagi plays outside Maroons centre Valentine Holmes at the Cowboys and Slater could leverage that left-side combination in Origin II.

Taulagi’s Maroons call-up would cap a remarkable rise for the 23-year-old, who has played 45 games since his NRL debut in 2019 and impressed this season with his 103kg frame, finishing ability and power running out of his own end.

“Murray has had a real standout year, but I haven’t ruled out Corey Oates,” Slater said.

“Murray is just another product of a Cowboys side playing really well, but Corey is a quality player and he is playing to his strengths at the moment.

“There can always be injuries which changes the look of the side, so we’ll see how the weekend plays out.”