The Blues might have had the highest-earning team but it was a bunch of bargain-priced Maroons who rose to the occasion in Game I. Check out the salaries of every Origin player.

The NSW Blues started favourites in the opening game of the State of Origin series at Accor Stadium, but they were stunned by Queensland’s new crop of talent, including Cowboys back-rower Reuben Cotter.

Before Origin I, News Corp conducted a deep dive into the salaries of the Blues and Maroons squads, and uncovered a gaping $500,000 chasm between the respective sides.

The divide was slightly closer when you took into account their relative worth on the open market, yet the gap remains. Among the key findings, News Corp discovered that:

* The Maroons spine is worth in excess of $4 million, with all four players part of rugby league’s million-dollar club;

* Brisbane winger Selwyn Cobbo is the lowest paid player on either side, although his earnings are set to skyrocket when he agrees a new deal, either at the Broncos or at one of the rivals chasing his signature;

* Halfbacks Nathan Cleary and Daly Cherry-Evans are the highest paid players on their respective teams, earning well in excess of $1 million a season; and

* In terms of earnings, the largest gulf is between the respective back rows where NSW’s Cameron Murray, Tariq Sims and Isaah Yeo rake in a combined $2.1 million, significantly more than their Queensland rivals. 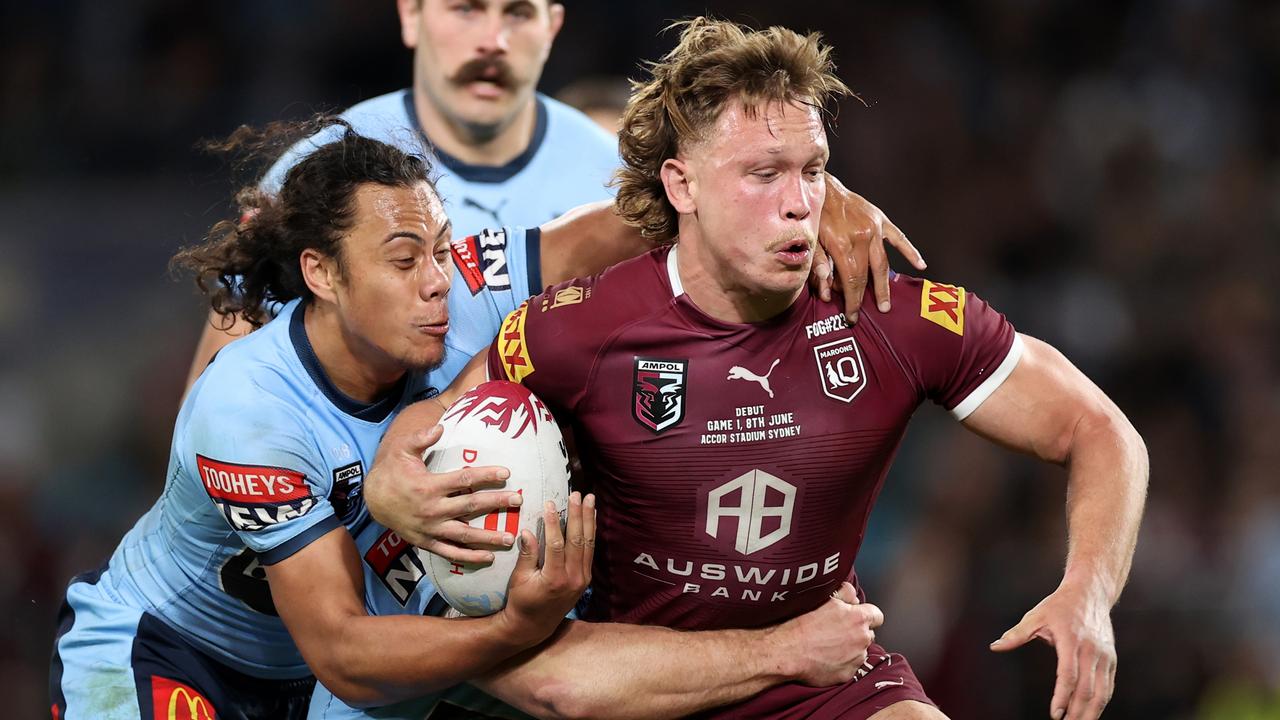 Reuben Cotter was one of Queensland’s best in Origin I. Picture: Cameron Spencer/Getty Images

The Maroons boast a $4 million spine — Kalyn Ponga, Cameron Munster, Cherry-Evans and Ben Hunt are all million-dollar men — but the total value of the Queensland squad is dragged down by the presence of bargain basements stars Cobbo, Jeremiah Nanai and Reuben Cotter.

News Corp understands that Cobbo is on a contract worth about $180,000 a season, although he is in line for a massive upgrade when he comes off contract at the end of next season after finding himself in the sights of a host of clubs.

Nanai was barely on $100,000 before he had his wages doubled when he signed a one-year extension with North Queensland earlier this year, the Cowboys kindly handing him an immediate upgrade as part of the deal.

Cotter, likewise, is in for a big pay hike at some point in the near future despite having signed an extension in the off-season that ties him to the Cowboys until the end of 2025.

At the time he signed the deal, Cotter was coming off a series of injuries that had stymied his career. Having finally found some blue sky in terms of avoiding injures, he has become a star with the Cowboys and forced his way into Billy Slater’s Maroons squad for the opening game of the Origin series.

There was a school of thought that the Maroons should be favourites heading into Wednesday night given the form of Munster and the fact that Brisbane, Melbourne and North Queensland have been in red-hot form through the opening half of the season.

The bookmakers didn’t listen and installed the Maroons as underdogs, a stance seemingly vindicated given the values of the respective squads. Even if all 34 players were placed on the open market, the Blues would still prevail.

The Maroons have four players in their squad earning more than $1 million a season compared to only two in the NSW side. Penrith’s Cleary is now the highest paid player in the game and leads the way for the Blues, closely followed by James Tedesco.

They are the only players in the NSW squad on seven-figure salaries. However, the earning capacity of the NSW side is more evenly spread across the side. After Cleary and Tedesco, Murray and Canberra star Jack Wighton are believed to be the next highest paid with both earning around $850,000 this year.

Wighton was named in the centres after fending off the challenge of Stephen Crichton, who has been designated the utility tole in the interchange bench. 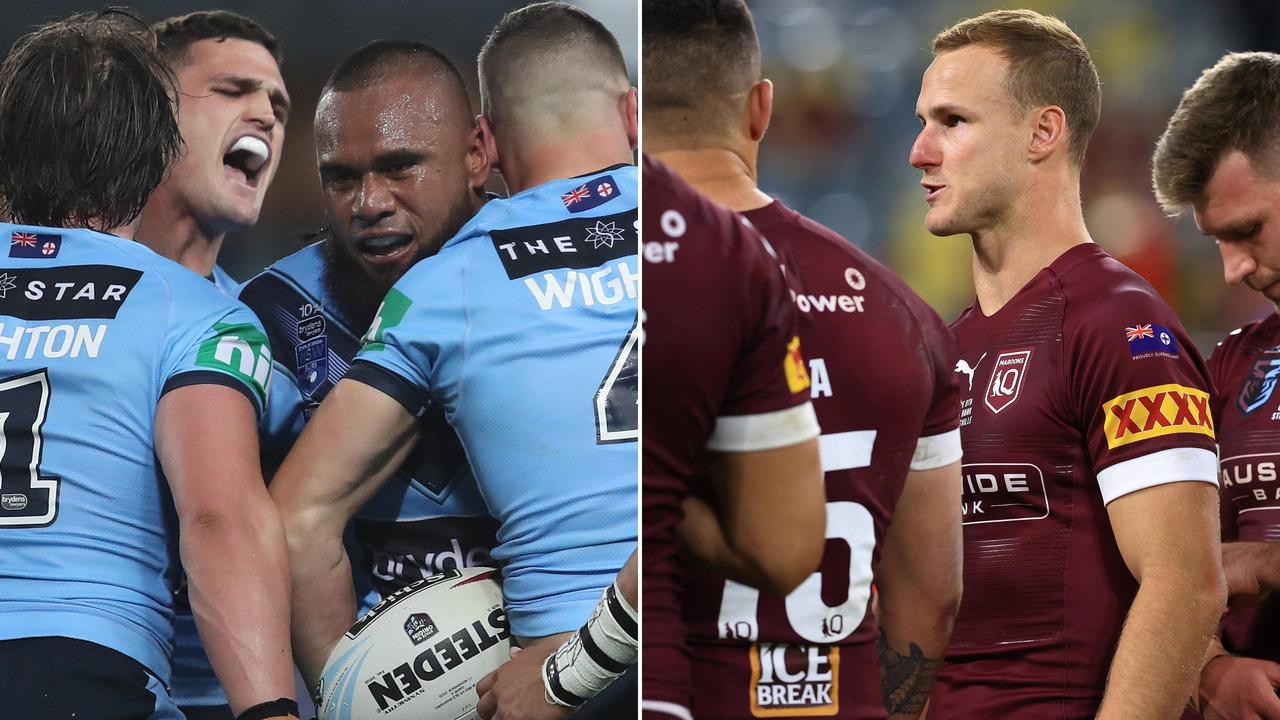 Nathan Cleary (NSW) and Daly Cherry-Evans (Queensland) are the highest paid players on each Origin team.

“With Tom (Trbojevic) and Latrell (Mitchell) out, it has caused a lot of debate about who was best to play in the centres,” NSW adviser Greg Alexander said.

“It was hard to narrow it down to the three and then to go one way. It caused a fair bit of consternation between the group.

“There was just a lot of chat about who we thought would be best. Jack has been there, he is an Origin player and he is aggressive. We thought that was the best choice to start with.”

NSW coach Brad Fittler made some significant changes to his side for this year’s series, axing loyal servants Jake Trbojevic and Josh Addo-Carr.

Those decisions attracted criticism from some quarters yet Fittler had a quickfire response for the critics who questioned his decision to make change despite winning three of the past four series.

“The team would be all 32 year olds,” Fittler fired back.

“Everyone gets their chance because they took someone’s position. I think I heard Damien Cook say you get this jersey, you borrow it for a while, you do your best and you pass it on.

“The good thing at the moment is we have great competition and people are playing their way into a role.”