State of Origin 2022: Harry Grant-Ben Hunt combination to be unleashed by Maroons

Billy Slater is set to unleash his trump card in game two as Queensland looks to wrap up the State of Origin series in Perth — and it should have the Blues backline on edge.

Injuries ruined Queensland’s secret weapon in Origin I but dummy-half dynamos Ben Hunt and Harry Grant are preparing to launch a double whammy on NSW in Perth.

If the Maroons have more luck on the injury front at Optus Stadium on Sunday night, Hunt and Grant will join forces together on the field to blitz the Blues.

Hunt, 32, will start his 13th Origin game for Queensland at hooker, with Grant to once again come off the bench as the Maroons’ super sub following an impressive Origin I performance.

But Queensland coach Billy Slater has formulated a plan that could see Hunt shift to a ball-playing lock role, instead of going to the bench, when Grant is at hooker.

That would give the Maroons a five-pronged playmaking attack along with halves Daly Cherry-Evans and Cameron Munster and fullback Kalyn Ponga.

The strategy wasn’t able to be used at Accor Stadium in the series-opener given the Maroons were forced to burn two unplanned interchanges after winger Xavier Coates and bench backrower Jeremiah Nanai suffered ankle injuries.

But it is back on the table and Hunt is hoping Queensland’s plan can be put into action.

“It’s definitely something I’m hoping we can do,” Hunt said.

“I’d love to be out there while Harry is.

“There was a bit of a plan to use us together in game one but it wasn’t set in stone. Anything can change in a game. Billy just did what he thought was best for the team and it obviously worked.

“With the way the first game worked out with injuries, and Reuben Cotter (lock) not getting tired, we just left him out there.

“He’s out of the mix now (hamstring injury) so you never know. We will be prepared for anything.” Harry Grant and Ben Hunt are set to be played in tandem in game two. Injuries robbed Billy Slater of the chance to play his attacking trump card.

Grant and Hunt hail from the Rockhampton region and both are graduates of league nursery St Brendan’s College in Yeppoon.

Grant, 24, grew up idolising Hunt and is hoping they can join forces together to clinch the series for Queensland in what will be his fourth Origin.

“We will see how the game goes,” Grant said.

“We spoke about having a plan before the game with the interchanges and how we use them, but that can change with injuries and what happened in game one when we had to shift players around. We’ll see what the coaches go with and what happens.

“I’d love to be on the field with him. We will have a good week and go from there.

“Hopefully I go to dummy-half and let him take all the hit-ups.”

By starting Hunt, a regular halfback who has excelled at hooker in Origin, Slater has options up his sleeve compared to NSW.

The Blues have selected two out-and-out hookers, with Penrith’s Api Koroisau and South Sydney’s Damien Cook to share the duties with the series on the line.

It’s hard to see the Blues adopting a similar approach, but Hunt said NSW’s dual hookers would be a threat after Cook played 80 minutes in Game One.

“I think Api deserves to be in the side, that’s for sure,” he said.

“He is a fabulous player and has been great for Penrith. He has been a good player for a long time.

“I’m not surprised by the move. They obviously think he can offer something there and they can bring Cook off the bench to use his speed when the game slows down a bit.

“We will definitely be aware of him (Cook). We worked really hard on him in the first game.

“Any time there is a quick play-the-ball he is out of there. He is going to have more energy now so we’re going to have to be better.”

You know what they say about men with big hands? They score plenty of tries.

Nanai, 19, has scored 11 tries in 13 games for the resurgent Cowboys this year to retain his spot in Queensland’s State of Origin team ahead of Sunday’s second game against NSW in Perth.

While Nanai has credited a volleyball background for his athletic leaping, it’s the backrower’s hands which give him an advantage when it comes to catching and planting the ball.

At 186cm and 104kg, Nanai is a big body and fellow Queensland backrower Kurt Capewell has never seen anything like “Miah’s Mitts”. 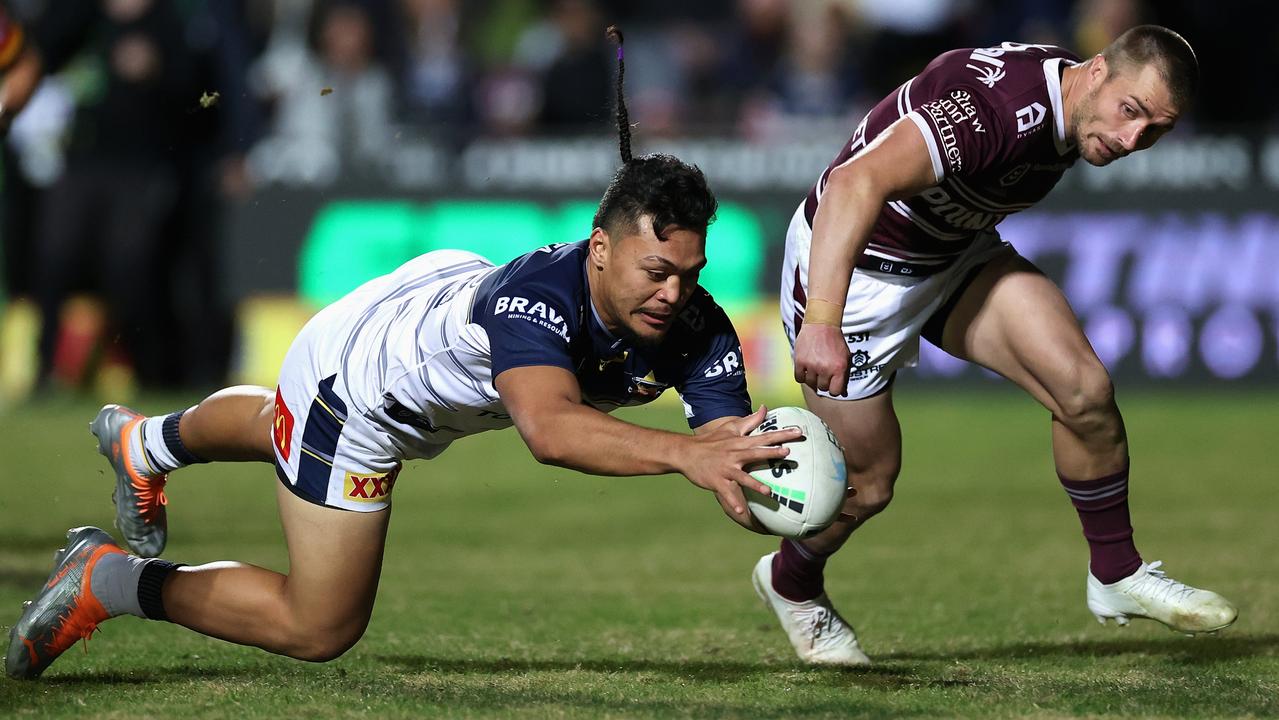 “He has got the biggest hands I’ve ever seen in my life,” Capewell said.

“It’s unbelievable. His hands are twice the size of mine.

“He is a good kid. He is quiet and goes about his training well.”

Nanai’s X-factor proved too hard to resist for Maroons coach Billy Slater, who blooded him off the bench in Queensland’s 16-10 Origin I victory in Sydney.

Nanai was restricted to 36 minutes in his Origin debut after sustaining an ankle injury that forced him from the field briefly before he bravely returned to finish the game in pain. The Cairns product revealed the injury hasn’t healed and he will carry it for the remainder of the season before he can properly rest it.

But he is in the big league now and has to learn how to play with pain.

“I was hoping it wasn’t too bad when I went back to the Cowboys,” Nanai said.

“I had a week off against the Dragons and I’ve been looking after it and recovering.

“It’s still a bit swollen, but I’m taking it step-by-step to slowly get back on the field at full strength.

“I’m not a little kid anymore. I’ve got to toughen up in this big game.

“It’s going to be sore for the rest of the year. I’ll leave it to the physio to strap it up all year and it will slowly recover.” Nanai was strong defensively in Origin I. (Photo by Cameron Spencer/Getty Images)

Most of Nanai’s time on the field in Game One was when Queensland was desperately defending its line amid a late charge from the Blues.

Nanai made 19 tackles but only managed two runs and he is hoping to have more of an impact at Optus Stadium when he comes off the bench.

The Blues didn’t experience his insane jumping and try-scoring efforts which could help Queensland secure the series in Perth.

“It was disappointing to get hurt,” he said.

Johns: ‘All in’ Blues unfathomable Game II snubCrichtons ready to add ‘mongrel’ to BluesWomen’s Origin: The plan to ‘take heads’ for $100K

“I was grateful I got to get back on the field and finish the game off and get a win.

“I’m going to do what Billy wants me to do when he puts me on the field. I will play my game.”

Originally published as State of Origin 2022: Harry Grant-Ben Hunt combination to be unleashed by Maroons