NRL clubs are ready for a November 1 frenzy with 15 players in Origin II in the mix to hit the open market. See which rep stars are on the hit list.

This will be the $10m State of Origin fire sale – and there’s some megabucks to be made.

Unbelievably, 15 players from State of Origin II in Perth could flood the NRL open market in just four months, prompting a frenzied scramble by cashed-up clubs to secure the cream of rugby league.

And players know – as do their agents – that a big game in Origin II on Sunday night can increase an annual contract value by up to $50,000.

The market will be red hot with several clubs having already started scrutinising the available big-name talent expected onto the market; Canterbury and the Dolphins certain to be active. Cameron Munster is among a star-studded list of Origin players off-contract after next season. Picture: Mark Kolbe/Getty Images

Canterbury’s Matt Burton is under contract until after 2024 but the final season is an option in his favour while Angus Crichton comes off after this year.

It adds up to around $10m worth of elite talent.

Latrell Mitchell, who should play Origin III provided he comes through his return club game for Souths against Parramatta next weekend, is also off contract after next season.

Crichton, the Roosters and Blues edge forward, has been linked to Parramatta, Wests Tigers and Melbourne. Speculation about a Crichton shift to Victoria continues to increase, although Storm management on Tuesday denied an interest.

“It’s unrivalled the amount of star players coming off contract at the one time,” said one leading player agent. “They are some of the biggest names in rugby league.

“Clubs have started talking about November 1 and who they may target.

“Some clubs won’t have the cash to chase but others are moving around their cap as we speak to ensure there is space to go after a big name once some of these players hit the open market in a few months.” Matt Burton will make his Origin debut for the Bluess in Perth. Picture: Paul Kane/Getty Images

Most clubs will be anxious to lock down their star players to avoid any open market scramble.

Penrith will face the challenge of trying to retain three Origin players – Crichton, Martin and To’o. The Panthers salary cap will already be tight through Nathan Cleary, James Fisher-Harris and Isaah Yeo.

Munster looms as the big fish.

He has been linked to deals worth up to $1.2m but does harbour a quiet desire to remain in Melbourne under coach Craig Bellamy.

“Munster will be the biggest story,” said one Sydney-based coach. “Can you imagine the headlines if he ended up quitting Melbourne? It would be huge news.”

Mitchell wants to re-sign at Souths and the club is ready to kickstart contract discussions. Cook is another champion the Rabbitohs desperately want to keep.

Brisbane also face the difficult task of re-signing Cobbo and Flegler while Cronulla will be keen to retain Talakai.

Sydney Roosters forward Angus Crichton is poised to knock back interest from several NRL rivals to commit his future to the Bondi club.

Crichton, who has been recalled into the NSW Blues side for game two in Perth, told News Corp a deal to stay in the Tricolours is edging “closer”.

“We are getting closer towards finalising a deal and obviously I want to stay at the Roosters, that is my ideal preference. I think we will get to that,” Crichton said.

“It’s a matter of working through that with the club and Robbo (coach Trent Robinson) and I’m hopeful we will have a result soon.”

The 26-year old is still without a contract for season 2023 and has drawn interest from a number of clubs, including Wests Tigers and Parramatta. Blues and Roosters forward Angus Crichton has been linked to the Eels, Tigers and Storm. Picture: Paul Kane/Getty Images

It’s believed the Eels had been monitoring Crichton’s contract talks with the Roosters. The western Sydney club viewed Crichton as a potential replacement for Ryan Matterson before the Eels backrower penned a four-year extension worth around $650,000 a season to stay in the Blue and Gold.

The Tigers had also held internal talks about making a play for Crichton, where he would forge an edge combination with Isaiah Papali’i after the club let go Kelma Tuilagi and Luciano Leilau.

The club was hoping to use the relationship Crichton built with coach Michael Maguire during their time at South Sydney as leverage. But Maguire was sacked from his role as head coach earlier this month.

Crichton told News Corp he had heard all the speculation about his future but insisted no talks had taken place with a rival club.

“There has been a few different rumours about different teams being keen but Roosters is where I want to stay and that’s all I can really say. I love the club and I want to stay as long as I can,” Crichton said. “I haven’t met with any other team at all.”

It’s believed Crichton had initially agreed to term to remain at the Roosters but the club’s salary cap squeeze would have prevented them from being able to lodge the deal with the NRL. 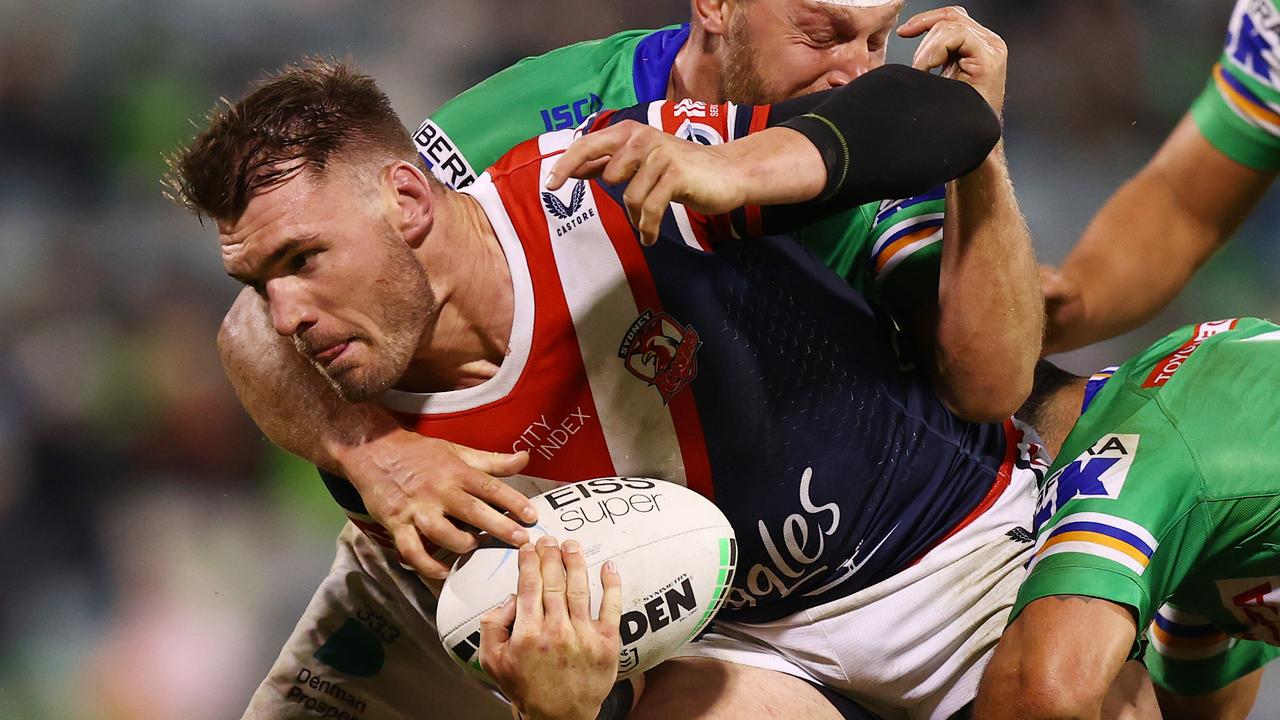 Angus Crichton is keen to stay at the Roosters. Picture: Mark Nolan/Getty Images

Crichton said his main focus at the moment was levelling the State of Origin series on Sunday night and then producing his best football for the Roosters, who are in the unfamiliar position of being outside of the top eight after going down to Eels on the weekend

“You want to be in that top four all the time,” Crichton said.

“To be outside of the top eight is not great but we have a lot of faith in our team with what we can achieve and how we can play.

“We have to keep on working hard and get back to the footy we know we are capable of.

The Roosters engine room has been missing veteran Jared Waerea-Hargreaves (hamstring) since round 12 and hard hitting Victor Radley (ankle) last featured back in round 10.

Crichton believes the untimely injury to Radley, who is part of Fittler’s Blues extended squad, hasn’t helped in the Roosters’ battle to stay in the top eight.

“He’s that structural player in the forwards that directs us through the middle, we miss his aggression in defence but he’s more than just an aggressive player,” Crichton said.

“We also miss his organisation in attack. It is good to see him running around again and hopefully he’ll be back playing for us soon.”