NSW has numerous holes in its Origin team, starting with Latrell Mitchell’s centre spot, while Kalyn Ponga is under pressure as Queensland No.1. FOX SPORTS LAB rates the contenders. 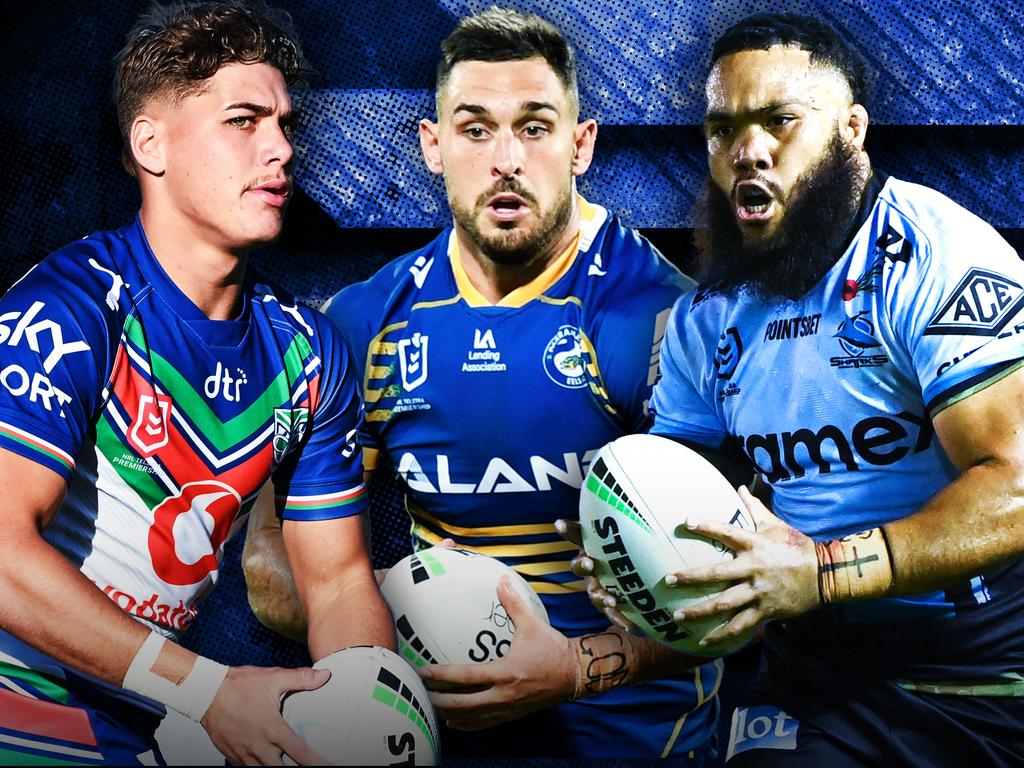 Several players are on the brink of making their Origin debut after standout starts to the 2022 season.

Brad Fittler and Billy Slater are close to naming their respective squads and injuries to key personnel will be weighing heavily on the minds of both Origin coaches.

For NSW, replacing Latrell Mitchell is high on the priority list. The powerful centre is set to miss game one through a serious hamstring injury. His club teammate Cam Murray is also in doubt after being rushed to surgery for a shoulder injury.

As for the Maroons, Slater will be combing the competition for someone to step into the shoes of Christian Welch, who will miss the series with an ACL injury.

Fox Sports Lab has crunched the numbers to examine the frontrunners for four key positions up for debate ahead of the first showdown on June 8.

The race to replace Latrell

Mitchell blew game one open last year with his explosiveness and ability to break the line. Two tries, two try assists and two linebreaks set the platform for the Blues to win the match 50-6.

Fittler is looking for a left centre with a similar ability to change – and he has several impressive candidates ready to fill the void. The man with the inside running appears to be Brisbane’s Kotoni Staggs. The 23-year-old’s talent is evident but this season he has produced the consistency to go to the next level.

A right edge player, Staggs’ defence has been his strong point this year. He’s averaging 15.4 tackles per game and, most impressively, dominated his showdown against fellow NSW contender, Siosifa Talakai, in round eight.

“He’s taken the battle personally,” said NSW assistant Greg Alexander on Fox League. “Staggs has been very good defensively all night on the man that has been all the chat in the NRL.”

However, if Fittler is looking for a centre to change the game with ball in hand, the numbers suggest looking elsewhere. Staggs has averaged less than nine runs a game, well down on Talakai’s 15 and Stephen Crichton’s 14.

The Broncos have been reluctant to overuse Staggs throughout the season. His average run metres (91) are not as strong as Talakai (154), Crichton (120) and another potential contender, Campbell Graham (132).

It’s the same story with average post-contact metres with Talakai (56) almost doubling Staggs (30) on the season so far with Crichton (36) and Graham (46) also ahead. Talakai has also benefited from playing in a free-flowing Sharks backline with five tries, five try assists, six linebreaks and five linebreak assists. Outside of linebreaks (seven), Staggs has less in all those categories.

But Staggs is still proving a handful despite limited opportunities. The Brisbane centre is averaging more tackle breaks per run (0.47) than his Cronulla rival (0.41).

There are a number of reasons for Fittler not to pick Staggs: Talakai plays on the left for Cronulla, Crichton has experience outside the Penrith spine and Graham has been around the Blues squad previously.

However, if Fittler is confident in the ability of his halves to get the ball to Staggs more regularly he would benefit from a defensively strong centre with game-breaking potential, fit for the Origin arena.

Who will fill out Freddy’s scrum?

Unfortunately for Fittler, it appears the only back-rower he can count on for his starting side is Penrith co-captain Isaah Yeo. He’s all but set to don the Blues’ No. 13.

The other certainty was Murray, but a shoulder injury requiring immediate surgery means he is now racing the clock to get ready for Game Two.

Of the rest of the chasing pack, many are making their case for a NSW berth. Ryan Matterson has been in Fittler’s extended squad before but a debut looks likely on the back of great form for the Eels in 2022. In just 59 minutes a game, Matterson’s numbers have led the way for back row contenders profiting from playing more in the middle for Parramatta this year.

He has averaged 14.4 runs per game with 133 metres on average. Throw in 48 post-contact metres a game and 13 offloads on the year and Matterson’s figures make a compelling case.

South Sydney’s Keaon Koloamatangi is another youngster on the verge of NSW selection. The 23-year-old has been one of the best in a struggling South Sydney side with 13 runs a game for 112 metres. He has similar figures for post-contact metres (44) to Matterson and has also been busting tackles for fun (21).

Both uncapped players have outperformed players Fittler has previously selected for the Blues’ back row.

Tariq Sims wore the No. 12 jumper in the final game of last year’s series. But the soon-to-be Storm player has struggled to find any sort of Origin-level consistency this year for the Dragons.

His runs (10) per game are down on his rivals and his metres (80), post-contact metres per game (33) and offloads (two) are lower than his usual levels.

It’s a similar story for another NSW stalwart, Tyson Frizell. The Knights enforcer has averaged 12 runs, 98 metres and 38 post-contact metres a game. Both could struggle to make their way into a much younger Blues forward pack than it was two years ago.

Liam Martin’s runs (10.4), metres (83), post-contact metres (31) and offloads (seven) are similar to Sims. However, after playing all three games off the bench last year the Penrith back-rower is likely to benefit from his success at state and club level and should retain his place.

Angus Crichton is another Fittler is likely to remain loyal to. His numbers this year sit in the middle of the pack at 12 runs and 104 metres a game. However, his post-contact metres (46) continue to be up there with some of the best in the competition.

Martin and Crichton’s role in last year’s victory will probably see them selected in the squad for game one and with Murray ruled out, there is a good chance Fittler turns to Frizell for experience.

But Matterson’s numbers should be enough to land him an Origin debut with Koloamatangi not far behind.

The pressure on Ponga

With his contract situation now behind him, Kalyn Ponga can focus on his footy again. But after an underwhelming start to the season for the Knights, the incumbent Maroons fullback has plenty of talented depth breathing down his neck.

Slater is unlikely to make too many changes but several young exciting backs around the NRL have outperformed Ponga to start the season. The Newcastle No. 1 has only had two tries and two try assists this year, a disappointing return through seven matches. He is also running the ball less than his counterparts with 12 runs per game from an average of 38 possessions.

AJ Brimson is one potential replacement, despite the fact he has spent the majority of 2022 at five-eighth for the Titans.

In his two matches at fullback, he ran the ball more consistently than Ponga with 12.5 runs per game from 29 possessions. However, his return was less than Ponga’s with only 94 metres a game and 29 post-contact. He also didn’t have a single try, try assist or linebreak assist from the back, which could be why Justin Holbrook has moved him back to five-eighth with Jayden Campbell’s return from injury.

The man putting up the best case to usurp Ponga so far in 2022 has been Warriors’ custodian Reece Walsh. Despite not registering a try of his own through eight matches, Walsh has been a shining light for the Warriors this year.

He has had a combined nine try and linebreak assists while also averaging 118 run metres a game from 11 runs. He outranks Ponga with 30 tackle busts and a slightly better kick defusal rate.

Walsh’s Origin debut was delayed due to a hamstring injury before game two last year. While Ponga remains the safe, reliable option for Queensland, Slater knows better than most what a young rookie can do in the Origin arena and Walsh’s numbers show he is already performing at an elite level.

In Origin I last year, the Blues had nearly 600 more run metres than the Maroons. Their roll-on continued through the series as the Blues dominated territory. One of Slater’s biggest challenges is picking a forward pack to not only compete, but win that battle early.

With Josh Papalii, Kurt Capewell, Felise Kaufusi and Tino Fa’asuamaleaui all set to feature, the only starting position up for grabs is prop, left open by Christian Welch (ACL).

The obvious replacements are Jai Arrow, Lindsay Collins or Moeaki Fotuaika, who have all had Queensland experience.

Fotuaika likely has the inside running. He was a standout for the Maroons last year and has continued that form in 2022.

He averages 11 runs a game for 107 metres in a Titans side struggling for consistency. He has also averaged less than one (0.9) missed tackle a game, fewer than Arrow (two) and Collins (2.1).

With 18 tackle busts and six offloads, he is also proving a handful in attack and would complement Papalii well as a starting forward.

The one big Maroons bolter is Cowboys forward, Reuben Cotter. Cotter is usually a dummy-half but has played at prop the last few weeks for Todd Payten. While an Origin debut would most likely come from the bench given his versatility, starting in the middle could be a genuine option.

Cotter’s average run metres (116), post-contact metres (43) and tackles (34.9) are well above the other contenders to replace Welch.

He’s also played big minutes with an average of 61 a game. But in the past two weeks at prop he’s punched out 80 and 75 minutes respectively.

“Queensland prides itself on and that‘s tough, tenacious and not missing tackles,” Cowboys and Queensland star Valentine Holmes said. “If he did pull a jersey on and get that chance I’m sure he would definitely take it with two hands.”

It would be a surprise to see Cotter start in the No. 8 jumper, but he has already proven this year he is not afraid of a challenge. Brad Fittler has previously banned contract negotiations from the NSW State of Origin camp. Payne Haas has nearly cost himself a spot twice. QLD Maroons selector: Is Fifita making your side?

Could new Maroons coach Billy Slater leave out David Fifita for Game 1? Injury and iffy form have made it a serious question. Pick your own 17-man Maroons team here and compare them to our experts. One of NSW’s best forwards in last year’s State of Origin series is set to be overlooked for Game I. Find out who is in the frame to secure a front-row spot.

The incredible reinventions of Valentine Holmes Parker: The NSW team this Queenslander would pick

Queensland great COREY PARKER has not only picked his Maroons team for State of Origin I, he’s revealed who he’d select in the Blues side. Both line-ups feature three debutants and big omissions.