KFC SuperCoach teams analysis Round 9: Cheapie with a sweet draw

South Sydney have made a huge selection call in their backline and KFC SuperCoaches are the beneficiaries. Lowdown from TOM SANGSTER.

KFC SuperCoach expert Tom Sangster runs his eyes over the NRL team announcements for Round 9.

* Isaiah Tass CTW $175,400 – Most popular buy this week after retaining his centre spot at the Rabbitohs ahead of Taane Milne, who missed last week through suspension and has been named on the extended bench. Tass’ job security is therefore good after winning his spot on merit, although keep a keen eye on Late Mail (thankfully the Rabbitohs play the first game of the round). The price rise potential is huge given the break even of -69 and projected rise of almost $100,000. 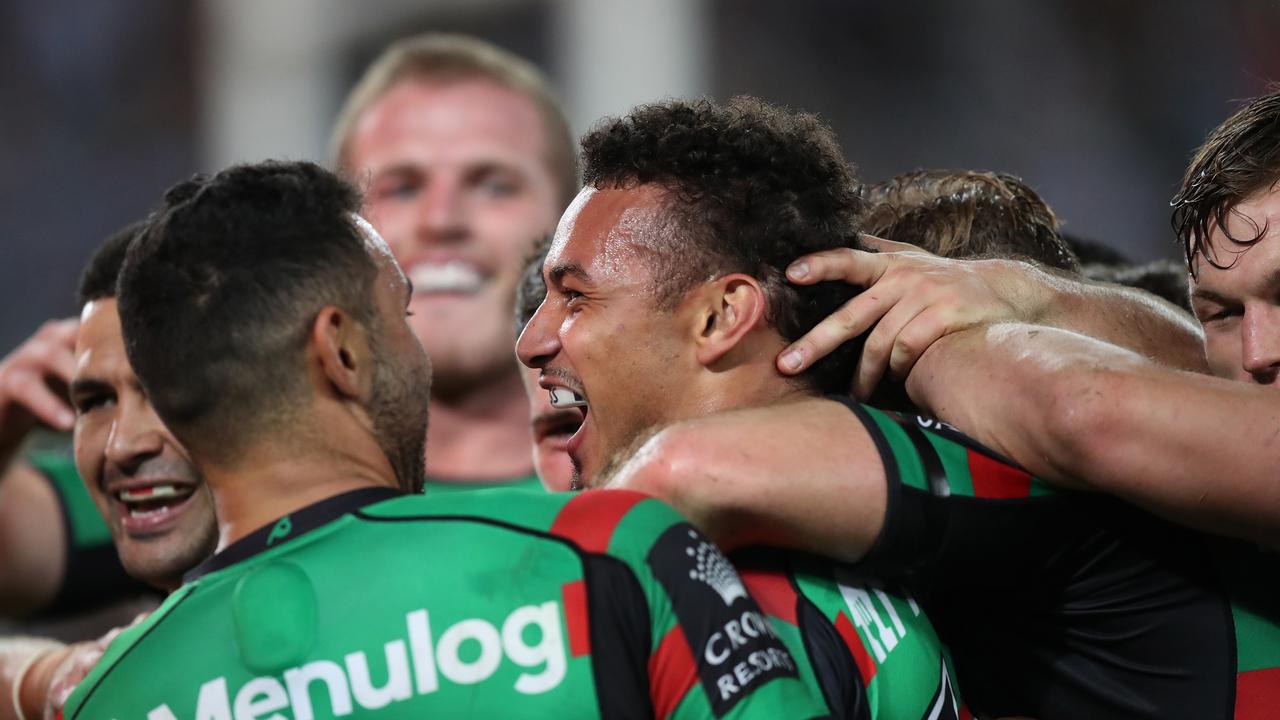 Isaiah Tass is the most purchased player this week. Picture: NRL Photos

* Te Maire Martin FLB/5-8 $205,100 – Popular cheapie Lachlan Ilias is ready to sell after peaking at a rise of just over $100,000 and Martin is the obvious bargain replacement. Ilias to Martin is the most popular trade of the week and while it hardly creates mass cash, the $100,000 is no doubt handy.

* Cody Walker 5-8 $514,500 – The KFC SuperCoach great has dropped by $220,400 so far this year as he adjusts to life without his marshal Adam Reynolds. It was a slow start to the season for Cody, but he has adjusted nicely in the last few weeks with a three-round average of 73.3, compared to a 33 average before that. Throw in the break even of -8 and projected rise of almost $50,000 and you’re looking at a very good buy. Also throw in his likely non-selection for Origin and you’re looking at a seriously good buy. Then add the barely-believable draw (bottom eight clubs for every single one of the next six weeks) and you’re looking at a guy who is seriously hard to leave out.

* Xavier Coates CTW $521,000 – And to think 12,000 KFC SuperCoaches sold two weeks ago. Coates has since scored seven, yes seven, tries and now sits with a break even of -69 and projected rise of $104,500 this round. He is therefore the fifth most purchased player as the risk-takers pile on. But with Origin looming, it’s only a quick cash grab and definitely a luxury trade.

* Isaiah Papali’i FRF/2RF $779,300 – Very popular purchase this week as KFC SuperCoaches look to offload David Fifita (injured). There are also some savages selling Payne Haas, but surely that’s an over-reaction given how valuable he is in a tough FRF position. Speaking of a tough FRF, Papali’i is almost 10 points per game ahead in the position (even though he plays on the edge for the Eels). He misses the first bye but will be crucial over the rep period – he won’t play Origin because he’s a Kiwi.

* Jason Taumalolo 2RF/FRF $605,600 – Speaking of a tough FRF position, and byes, and Internationals … Taumalolo sits second at FRF for total points. But unlike Papali’i, Lolo is available for the first bye in Round 13 and therefore looms as a near-must for that week. With a break even of 66, it’s hardly an urgent trade. But serious KFC SuperCoaches must have a plan to get him in before the byes.

* Taylan May CTW $526,400 – Coach Ivan Cleary has left us hanging. May was the third most sold player heading into teams day. Of course, many of those parting ways presumably thought May would be dropped to accommodate the return of Brian To’o. However, Cleary has strung us out by naming To’o on the extended bench. Most mail suggests that even with To’o back, May will retain his spot in the starting side with Charlie Staines the man to drop out.

Thankfully the Panthers play early in the round (7.55pm on Friday) and we should get a decision/indication before big trades need to be made. While May has theoretically peaked (BE 73), he also plays on the wing for the Panthers (a great spot to be) and has the best average of any fit CTW in the game. Hold and play in your 17 every week, pending late changes this round. * Tom Trbojevic FLB $969,900 – Tommy Turbo is back. And while he’s not a buy given the break even of 163 and looming Origin selection, his return thankfully hasn’t effected star cheapies Christian Tuipolotu and Tolutau Koula. Injuries to both Brad Parker (knee) and Jason Saab (toe) mean Tiupolotu and Koula have been retained.

* Viliame Vailea CTW $205,100 – Even with Dallin-Watene-Zelezniak (concussion) back, Vailea has retained his spot in the starting backline at the Warriors and will initiate his first price rise after this week. The popular early-season cheapie is still owned by more than a quarter of KFC SuperCoaches. 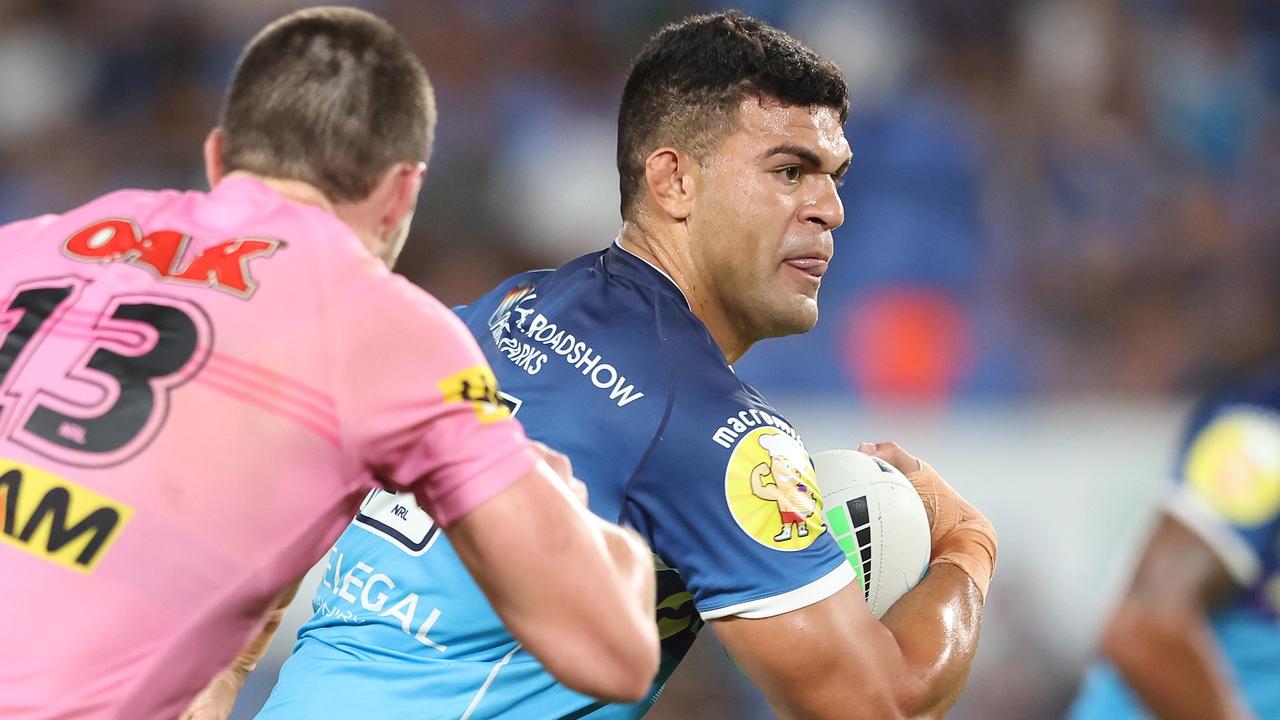 * David Fifita 2RF $709,700 – Out for a month with a knee injury and therefore the most sold player this week by a long distance. Basically, those holding this long have had a tough decision made for them after two poor weeks in a row. Papali’i and Taumalolo are calling.

* Payne Haas FRF $648,800 – On the losers list given he is expected to miss at least a week due to a shoulder injury. But definitely don’t sell given his reliability in a tough FRF position.

* Chris Randall, Brad Schneider, Will Penisini – Popular cheapies who have all peaked and can be cashed in at any time. All are high on the sell list this week. 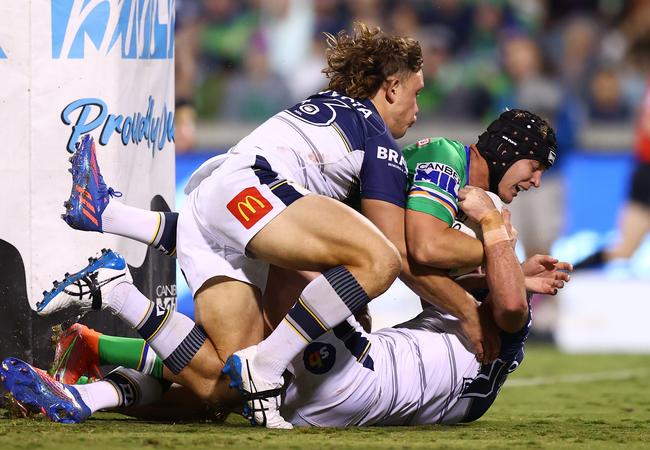 Isaih Tass holds his spot with Taane Milne named in the reserves on his return from suspension. However, Jaxson Paulo has been named on the bench. Liam Knight returns and is named on the bench in place of Davvy Moale. Shaq Mitchell is dropped from the 24.

Two big outs for the Broncos with Payne Haas and Kurt Capewell missing from the team. Pat Carrigan returns after a long absence (knee) and will deputise for Haas in the front row, TC Robati gets the start in the second row in place of Capewell. Billy Walters is still named to start at hooker though Jake Turpin lurks in the reserves.

Ricky Stuart has had enough. Xavier Savage and Semi Valemei are out with Jarod Croker returning at centre and Jordan Rapana shifting from fullback to wing in place of Savage. Rapana’s move permits Nicoll-Klokstad to revert to his job of starting fullback. Jack Wighton (suspended) is replaced by Matt Frawley. Elliott Whitehead is again named to start after being a late withdrawal for two weeks running.

Josh Jackson (Covid) is back which sees Max King go to the bench and Billy Tsikrikas (suspended) out. Brent Naden (Covid) also returns at the expense of Jayden Okunbor.

No changes but there’s a Sir Mixalot sized but to add to that with Brian To’o and Moses Leota named in the reserves. Watch late teams.

Tom Opacic returns to the team at centre which sees Dylan Brown revert to the halves and Jake Arthur go to the reserves. Also in the reserves is Sean Russell (ribs) who is working back to fitness after a long break.

A bit of movement here. Luciano Leilua (ankle) is replaced by Alex Seyfarth. Tyrone Peachey and Stefano Utoikamanu come on to the bench and Jake Simpkin is to start at hooker.

Daniel Tupou returns from his one match suspension and will start on his customary left wing in place of Kevin Naiqama. Paul Momirovski starts at centre in place of Adam Keighran (ankle).

David Fifita (knee) is out which sees Kevin Proctor start at second row and Sam Mcintyre slot in to the reserves. Jayden Campbell is still in the reserves.

An unchanged team from Todd Payten, though no doubt he will tinker with his backrow starting one player named on the bench and shifting his lock to prop or vice versa as is his wont.

Might be easier to list who hasn’t changed as the Knights are well and truly copping it in injuries right now.

Adam Clune is replaced at halfback by Phoenix Crossland while Jake Clifford has been replaced at five-eighth by Tex Hoy. Dom Young returns on the wing replacing Simi Sasagi. Lachlan Fitzgibbon returns to the second row at the expense of Brodie Jones. Kurt Mann (ankle) is expected to miss the next two weeks opening the door for exciting middle Leo Thompson to start at lock. Pasami Saulo and Mat Croker join the bench.

It’s a settled storm with only Tepai Moeroa (bench) out replaced by Jordan Grant.

Talatau Amone makes way for the return of Jack Bird. Amone slips to the bench pushing Jayden Sullivan to the reserves.

Skipper Dale Finucane returns at his customary lock position which sees Cam McInnes go to the bench and Braydon Trindall the reserves. Matt Ikuvalu and Connor Tracey lurk in the reserves.

‘The game wiped me’: How NRL deserted broken Origin star

Dallin Watene-Zelezniak (concussion) returns just in time to mark up against a Cronulla edge featuring Siosifa Talakai. Eliesa Katoa earns a start in place of Bayley Sironen, Aaron Pene comes on to the bench.

Originally published as KFC SuperCoach teams analysis Round 9: Cheapie with a sweet draw 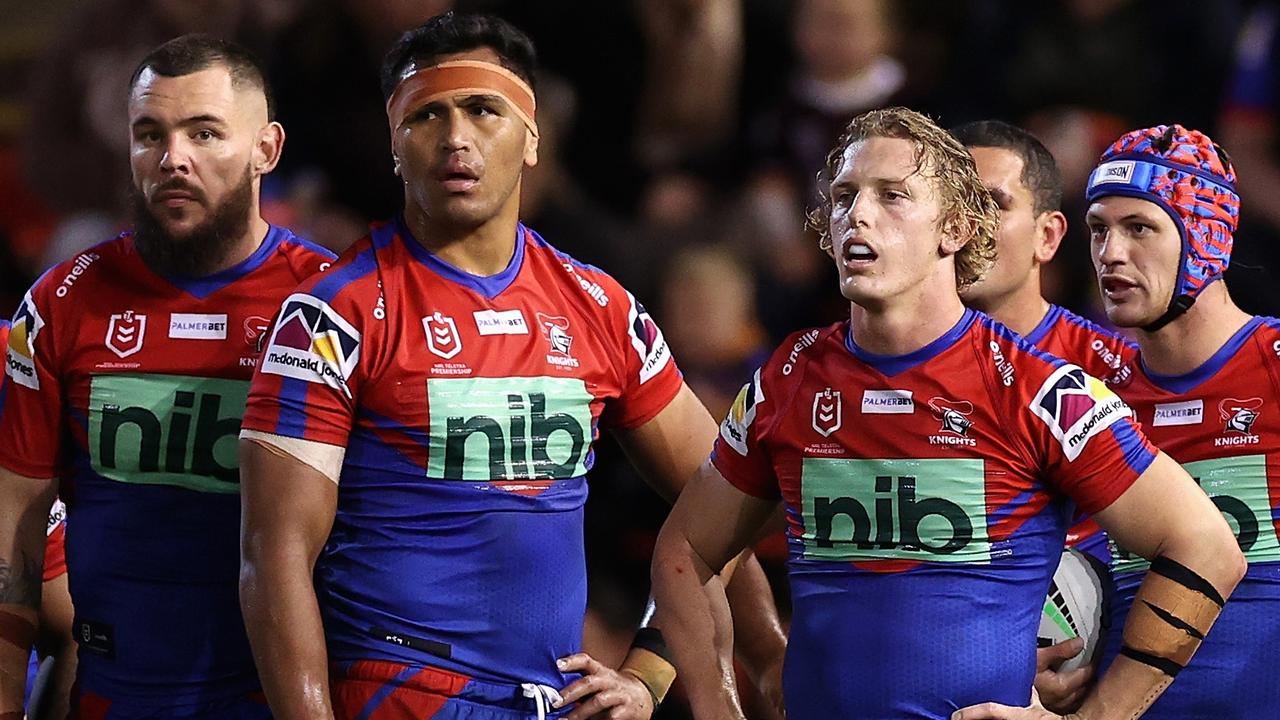 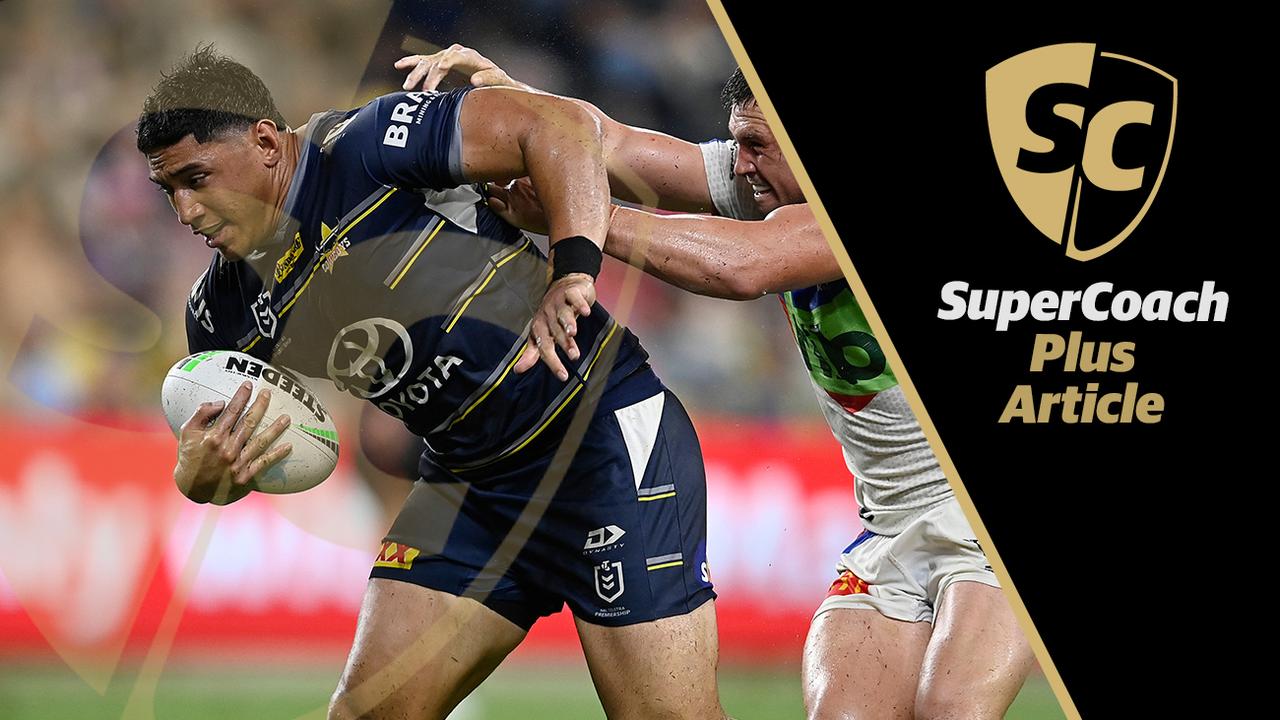