There are a host of team changes for Round 10 and the most popular cheapie of the week has been named to start, but another has missed out. See full team news.

Some big calls to be made this week and in an attempt to pre-empt duplicate questions on hot topics I’ll try to dot point some major issues below:

Do I trade Ryan Papenhuyzen? I’m leaning to yes. The unofficial timeline is 2-4 weeks. After the game Paps said he had torn the hamstring, that he had jarred the knee and was dealing with long-term ankle problems. All that combined suggests we’re more at the four weekend of the spectrum and that’s a sell for me.

If I trade Papenhuyzen who do I get? If you don’t have Nicho Hynes then he’s the top pick. If you do then I’m leaning to Tommy Turbo over Teddy and Drinkwater. Tommy had a lazy 20 runs on his comeback game looking dangerous in most of them. The Tigers did well to limit him to 78 points. The price is still a little high and the draw is not ideal (Broncos, Eels, Storm then Origin) but if you are selling an upside gun like paps I think you need to replace with an upside gun and Turbo is that.

Any left field options? It’s not a complete POD pick (he’s currently the sixth most bought player) but Reuben Garrick goes well when Tommy plays well and at $650K he’s a cut price way into Turbo. Do I sell Siosifa Talakai? I’d prefer not to, but in my case I am very tempted. My decision point is whether I sell Cook or Talakai to get in Grant (who I rate as a must). At this stage I feel Talakai is peak price and Cook is more reliable and will likely score more points over the course of the season so am leaning to selling Sifa.

How about Tago? I still want to hold Tago even with a tough draw of Storm, Roosters, Cowboys (I can’t believe I added Cowboys in the tough draw either but you can’t deny form) but appreciate that a 5RA of 43PPG is losing him fans fast. Ben Trbojevic has been named to start at centre for Manly in Round 10, and is set for a significant price rise. Picture: Getty Images.

And lastly, what about Burbo? This one I’m not 100% on – but I’m close. Trbo Jr Jr, or Burbo as he is known, was good and Ok last week scoring two tries (good) but just 35 in base (Ok) when playing second row. Another positive (for Burbo) was the Early Mail news that Josh Schuster’s calf injury is not healing as fast as expected opening the door for Burbo to get at least one and maybe two more starts at second row. And of course, Burbo was selected ahead of Morgan harper last week anyway so there’s the prospect that when Schuster does return Burbo moves to centre. Lots of positives, to which you can add a BE of -51 and a projected $100K increase over the next two weeks with scores of just 30 points. AND he covers the Rd 13 bye. Lots of positives, the only negative is that to get him I need to use a boost, but if I need more Tommy Sangster has a special code you can enter for five extra boosts so I’ll just hit him up for that.

MAGIC ROUND: ROUND 10 TEAMS

TEAM NEWS: Not much in the way of changes from the Dogs with an unchanged 13 and the only move being Chris Patolo coming on to the bench in place of Ava Seumanufagai.

TEAM NEWS: Mitch Barnett is back after serving his lengthy suspension and slots straight on to an edge for the Knights, with Tyson Frizell still out. Adam Clune also returns after missing last week (knee) and his return sees Phoenix Crossland revert to the bench as the utility. Sauaso Sue is in the reserves but would not surprise to see him join the bench.

TEAM NEWS: A couple of Origin stars in Payne Haas (shoulder) and Kurt Capewell (neck) return to beef-up the pack which sees Pat Carrigan move to lock, TC Robati to the reserves and Kobe Hetherington to the bench.

TEAM NEWS: Tohu Harris (ACL) is set to play his first game of the season and has been named to start on an edge. Marcelo Montoya (suspension) slots in on the wing with Rocco Berry punted to the reserves and Adam Pompey moving in one to the centres.

TEAM NEWS: New recruit Kodi Nikorima has been named to play #14 against his old club. Cam Murray (neck/shoulder) is out which sees Jai Arrow move to lock and Jacob Host start on an edge. SuperCoach cheapie Isaiah Tass has been dropped after an average game last week replaced by Jaxson Paulo. Tom Burgess is a big return and as a result Davvy Moale slides to the bench.

TEAM NEWS: It’s time to rearrange the deckchairs at the Titans. Jayden Campbell returns at fullback, so AJ Brimson slots in to five-eighth and Will Smith is dropped all together. Both wingers, Corey Thompson and Greg Marzhew, are out replaced by Phillip Sami and Jamayne Isaako while centre Pat Herbert is dropped with Esan Marsters getting a run. Kevin Proctor is punted to the reserves with Isaac Liu moving from the middle to an edge and Jarrod Wallace coming in at prop.

TEAM NEWS: No changes at the Dragons!

TEAM NEWS: Ryan Papenhuyzen (hamstring/Knee/ankle) is out for up to six weeks with Nick Meaney having first crack at replacing him. Reimis Smith (pec) is another who will miss an extended period, Marion Seve has been called up to replace him in the centres.

TEAM NEWS: Scott Sorensen returns after missing last week, Matt Eisenhuth is the player who has been sent to the reserves though it would not surprise to see him replace Jaeman Salmon in the final line-up.

TEAM NEWS: Will Kennedy (suspended) is out so Nicho Hynes moves from halfback to fullback with Braydon Trindall coming in to the halves. Jesse Ramien (suspended) is replaced at centre by Connor Tracey. Royce Hunt comes on to the bench in place of Andrew Fifita.

TEAM NEWS: Lindsay Collins (suspended) will miss this week so veteran Siosiua Taukeiaho starts and Daniel Suluka-Fifita comes on to the bench. Hooker Sam Verrills (collarbone) will miss an extended period which is offset by the return of Connor Watson.

TEAM NEWS: No changes to the team that won last week. Sean Russell still lurks on the reserves.

TEAM NEWS: Just one change for the Tigers but it’s a big one with Luciano Leilua set to play against the club he is joining in 2023. Leilua’s return pushes Seyfarth to the bench and Thomas Mikaele to the reserves.

TEAM NEWS: No changes to last week’s team. Let’s see if coach Todd Payten can go 2 for 2 and play the team as named like he did last week. SuperCoach: Top PODs to win you a prelim final

The KFC SuperCoach preliminary finals are here and these are the top PODs to give you the edge, via former champion WILFRED ZEE. 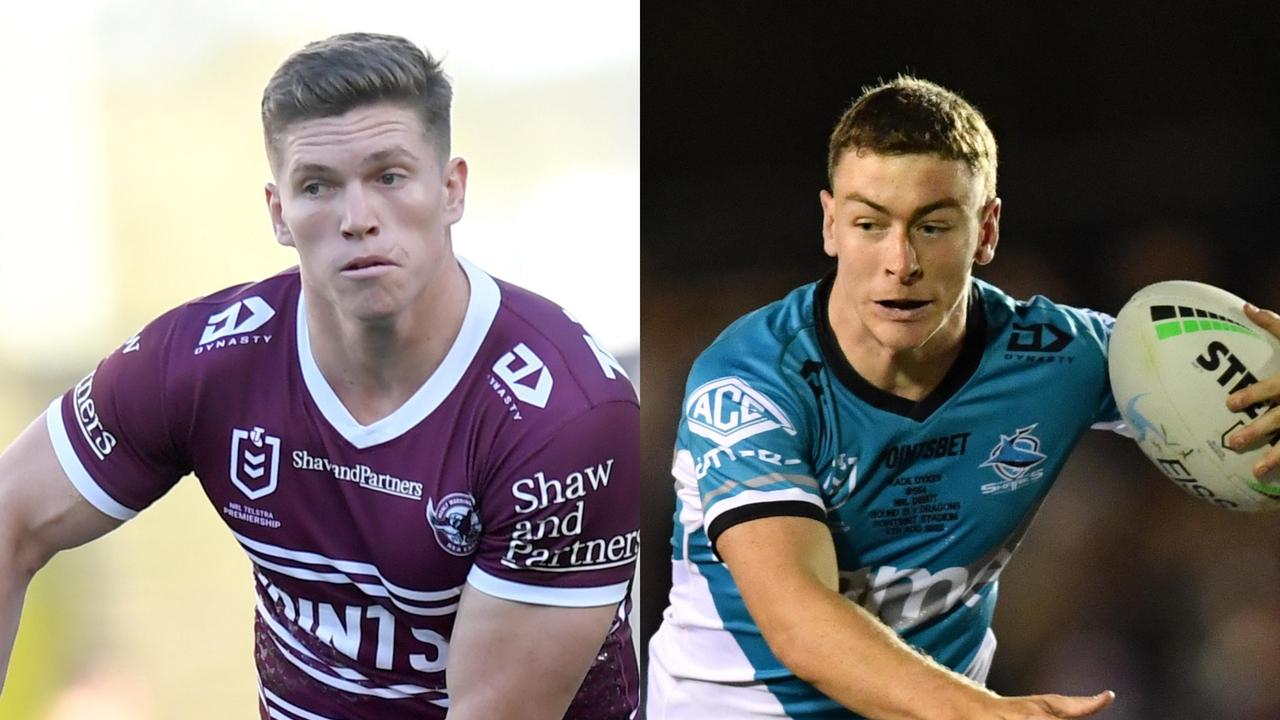 Manly’s season has gone from bad to worse, and there’s bad news too for their opponents. Full predicted team changes here.

It’s KFC SuperCoach preliminary finals time so every move matters. Get the lowdown with Tom Sangster and Rob Sutherland. It’s sudden death in KFC SuperCoach and these are the players who could win you an all-important preliminary final. Full NRL teams analysis Parramatta and Cronulla welcome back influential playmakers to their teams, while the Rabbitohs have kept Latrell Mitchell in the mix to play. Find who’s in and who’s out for round 23. Damaging backrower David Fifita has called for his Keebra Park schoolmate to remain at halfback, saying “I have a good combination with him from growing up.”