Superstar fullback Tom Trbojevic got the news he was dreading after scans on his shoulder confirmed he will miss the rest of the season.

In a crushing blow to Manly, NSW and Australia, Manly superstar Tom Trbojevic has been ruled out for the season.

A devastated Trbojevic confirmed the injury diagnosis to The Sunday Telegraph on Saturday night. The Dally M Medal winner dislocated his left shoulder in Manly’s narrow loss to Parramatta on Friday night.

Trbojevic was too distraught to be interviewed when contacted by The Sunday Telegraph.

“I’m not up to talking right now,” he said via a text. “Tommy gives so much to the game. This a cruel blow but we know he will bounce back,” Hasler said.

It will be a hammer blow to Manly, who sit outside the top eight with five wins from 11 games and face Melbourne this Thursday night at AAMI Park.

Trbojevic was enjoying a return to form when the injury occurred during the second half of Manly’s late 22-20 loss to Parramatta on Friday evening.

He was attempting to shovel a ball dead-in-goal when he landed awkwardly and was taken immediately from the field with his shoulder in a jumper sling.

Stephen Crichton, Jack Wighton, Kotoni Staggs and Siosifa Talakai are the frontrunners to replace the gaping hole left in the NSW backline.

The omission of the star duo is a seismic blow for both NSW and Fittler who lost his only series as Blues coach when the two strike weapons were unavailable in 2020.

In more positive news for the Blues, The Sunday Telegraph can reveal key forward Cameron Murray is poised to make a shock return to the field, after originally being considered little chance of being fit for Origin selection. 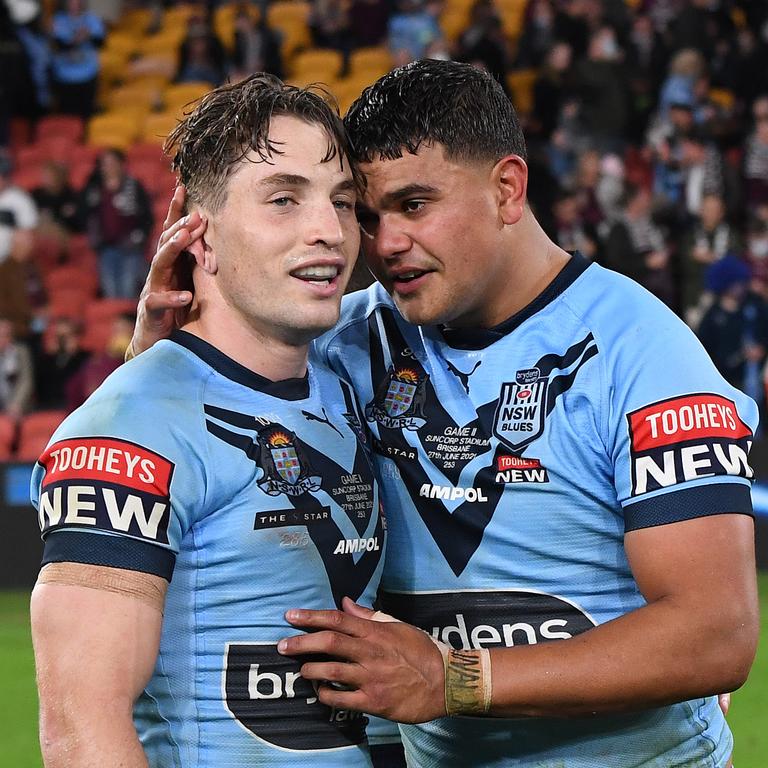 (L) Cameron Murray is set to make a shock recovery ahead of origin I. Picture: Bradley Kanaris/Getty Images

Just 11-days after undergoing shoulder surgery, the South Sydney captain is on track for a rapid recovery and is aiming to lead the Bunnies next weekend.

The results of scans will determine how long both Manly and NSW will be without Trbojevic, who left Commbank Stadium with his left shoulder immobilised and in a sling on Friday night.

The damage could reveal a recovery period of anywhere between four weeks to the rest of the season.

Fittler has just seven days to find two new centres before picking his Origin I squad next Sunday. 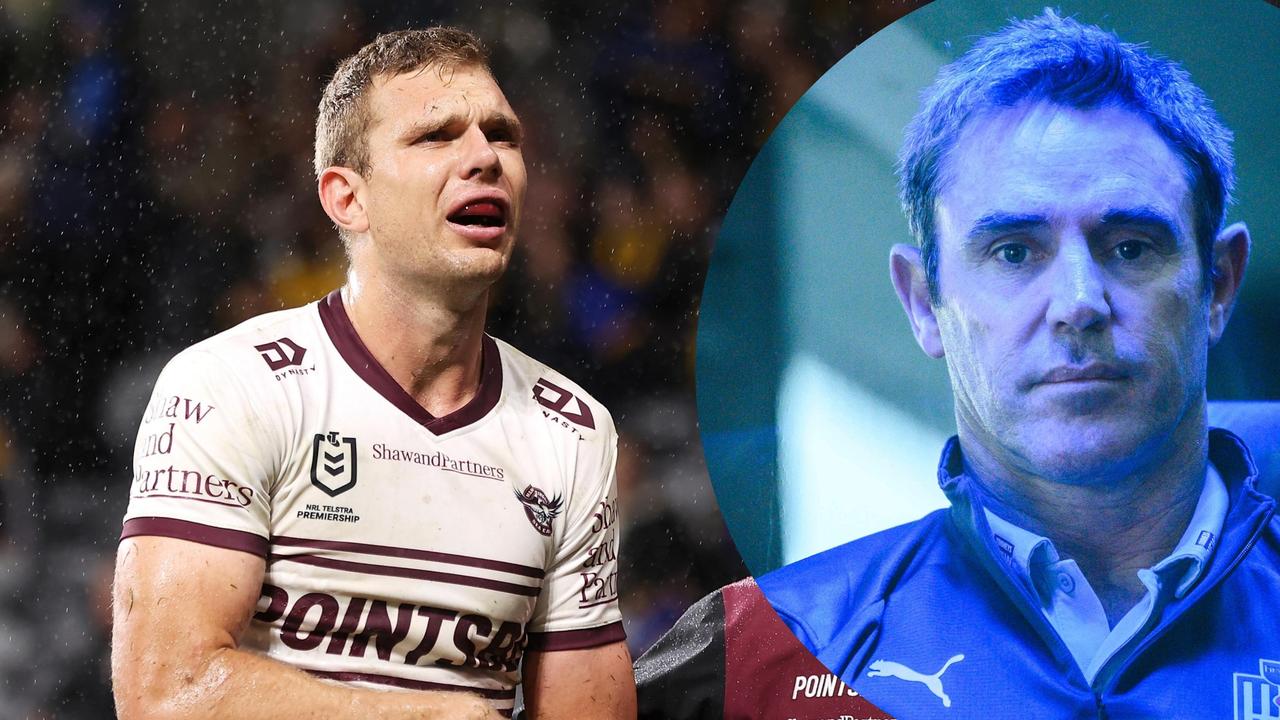 The opening game of the State of Origin series is on June 8 in Sydney.

“Obviously he (Trbojevic) won’t be playing State of Origin,’’ Fittler said on Nine.

“We’ve got another week to go to make a decision.

“If you look over the history of State of Origin, some of the greatest wins have come under the greatest adversity, that’s the beauty of the game.

“I was confident he (Trbojevic) was going to play in the centres, so there’s an opportunity for someone to make a name for themselves and step up.’’

As a result of Trbojevic‘s injury NSW are cooling as favourites.

Crichton’s rich form and key combination with a large contingent of Penrith players that will be named for the Blues, including Nathan Cleary, Jarome Luai, Liam Martin, Isaah Yeo and Brian To’o almost guarantees the 21 year-old will make his NSW Origin debut.

Wighton holds a slight advantage having performed for the Blues at centre in the past. Stephen Crichton of the Panthers would appear to be a certain selection at right centre. Picture: Bradley Kanaris/Getty Images

Of Wighton‘s nine Origin games, five have been at centre, including during the victorious 2019 series.

Undeniably though, Staggs and Talakai are the focus of discussion within the Blues brains-trust despite neither having played State of Origin before.

Staggs, who prefers to play at right centre has been in devastating form for the Broncos over the past 18-months.

However, the blockbusting Talakai holds a clear statistical advantage.

He leads the NRL for average run metres (180) and is equal-first for tackle busts (58).

Fittler could still opt to select Talakai on his bench, with the Cronulla powerhouse capable of playing at centre, or in the forwards.

One less concern facing Fittler is the inclusion of Murray.

Murray only needs to pass a fitness test on Tuesday to be cleared to return for Souths round 12 clash with the Wests Tigers at Accor Stadium on Saturday. 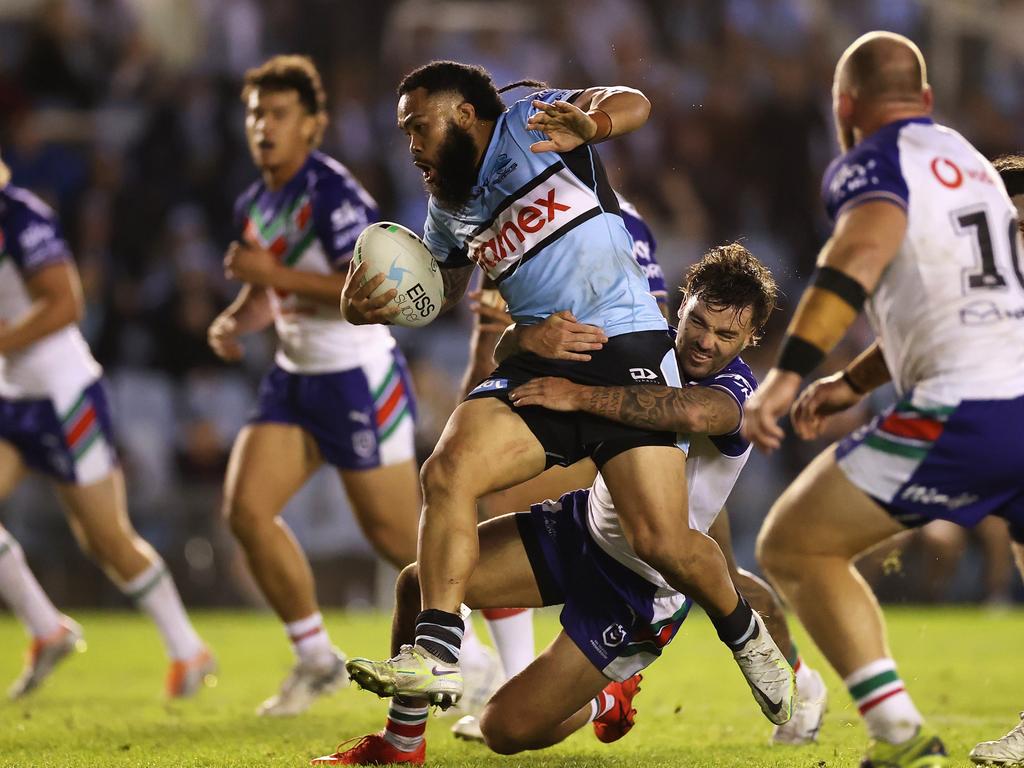 Siosifa Talakai of the Sharks can cover centre, scond row and play in the middle. Picture: Cameron Spencer/Getty Images

Rabbitohs physiotherapist Eddie Farah had originally indicated that the shoulder procedure would keep Murray out for “three to four weeks.”

If he returns next Saturday, Murray will have missed only two games.

Murray missed last week’s Magic Round win over the Warriors and will remain sidelined for the Bunnies clash with the Raiders in Dubbo on Sunday.

However, in a testament to the Rabbitohs leader‘s willpower and dedication to his rehabilitation, Murray is pushing to benefit from one game under his belt before Origin I.

The Rabbitohs are fully supportive of Murray doing everything possible to play on Saturday - in readiness for the Origin series opener.

Murray‘s availability for the Blues would prove a major bonus for Fittler, who rates the lock-forward as one of the most crucial elements of his forward pack.

The 24-year-old has played seven times for the Blues, including all three matches in the second row for NSW last year.

Brad Fittler is resigned to being without Tom Trbojevic for this year’s State of Origin series after the Sea Eagles fullback dislocated his left shoulder in the 22-20 loss to Parramatta on Friday night.

The injury will rule him out of the series which starts on June 8 and puts his 2022 NRL campaign in doubt, with scans set to reveal the full extent of the injury.

Trbojevic was having one of his best games of the season and looked set to conjure a famous Manly win before he landed awkwardly while trying to defuse a grubber midway through the second half.

It’s not just the Sea Eagles who will suffer, with the Blues set to be without last year’s player of the series.

“He was starting to look good and he was coming up with some big plays. He’s had a tough couple of years,” Fittler said of Trbojevic who ran riot at right centre last year.

“We tried to interview (his brother) Jake after the game. That was tricky viewing.”

This continues a horror run for the Blues who have lost incumbents Cameron Murray, Dale Finucane and Latrell Mitchell to injury, while hopefuls Ryan Papenhuyzen and Victor Radley are also sidelined.

It means Fittler won’t be rushing into any team selections at the end of the round.

“I don’t want to pick one this week because there’s another week to go and there’s another five games to go. I think I’ll stick to a pencil at the moment,” he said in the CommBank Stadium sheds after the game. The Blues coach lamented the fact his side would be without some of their most important players against a resurgent Queensland team led by Billy Slater, but he’s confident whoever comes in will get the job done.

“They’re big personalities, and that’s what State of Origin is all about – getting all the biggest stars,” Fittler said.

Why NRL battlers were wrong to let star halves goShow us the money: RLPA fires first shot in pay battle

“Hopefully Latrell will be fit and play a part in the Origin series somewhere, but as it seems at the moment, Tom won’t be.

“The one thing that I do know is that Origin always sets up great moments and great occasions, so the fact we’ll be down a couple means we’ll have to turn it into a great occasion.”