NSW Blues star Matt Burton could be forced to weigh up a multimillion dollar code switch when his Bulldogs contract expires at the end of 2023, writes PHIL ROTHFIELD.

Rugby Australia wants to sound out Canterbury Bulldogs and NSW State of Origin star Matt Burton for a multimillion-dollar code switch when his NRL contract expires at the end of next season.

Burton’s booming left foot kick has caught the attention of sporting fans across the nation, including AFL and rugby union, and landed him in the sights of Wallaby recruiters.

Rugby Australia chairman Hamish McLennan has confirmed Burton’s name has been discussed as a potential signing as the code starts to prepare for the home 2027 World Cup.

Rugby experts believe he would be a sensational fullback with his torpedo kick that has been measured at up to 70m.

This is equal to the longest kickers in AFL and up there with the best punters in the NFL. 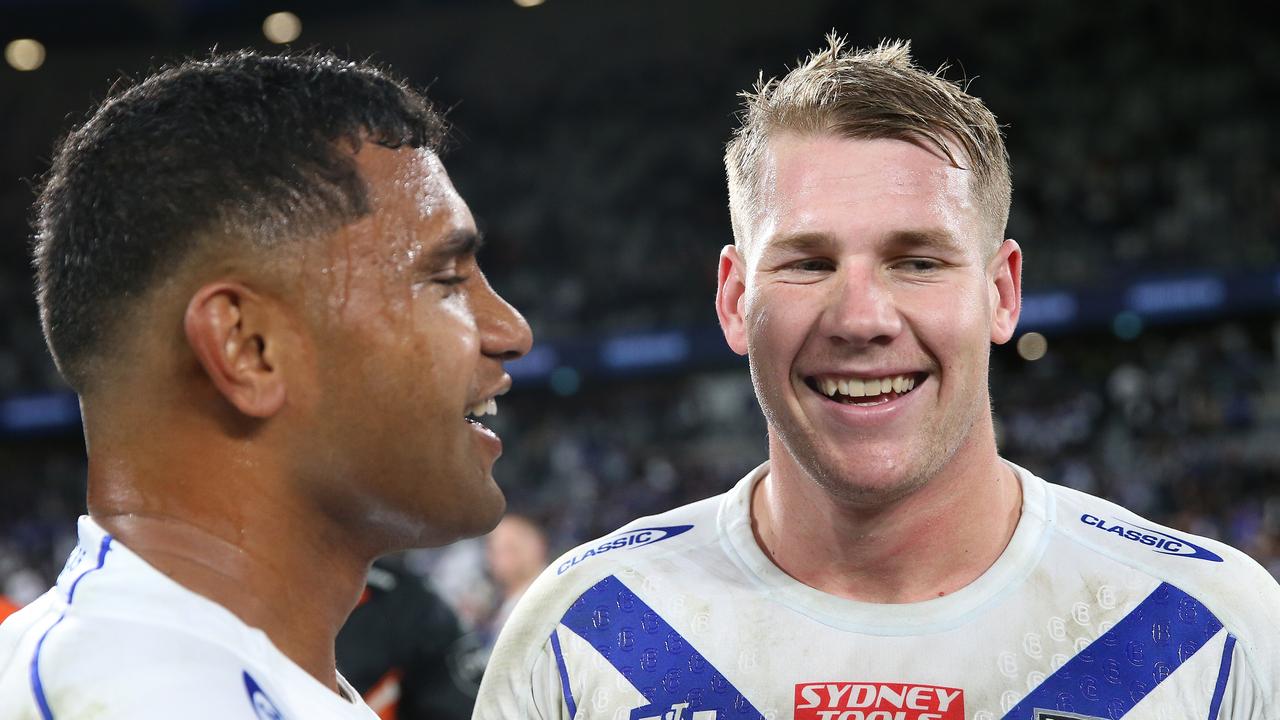 Matt Burton could be targetted for a shock code switch to Rugby Union when his current contract ends at the end of 2023.

The RA has recovered from their precarious financial position during Covid to be in a position to have a serious crack Bulldogs centre.

“Matt’s exactly the sort of player we need,” McLennan said. “Everyone has seen his kick – he’s a freak. He’s a great player with lots of potential.”

He said there are others on an RA hit list including Roosters star Joseph Suaalii, who is on only a 12-month deal at the Chooks.

“I’m not going to name them all but we’re looking into it with a few of them,” he said.

Burton, who played rugby at school, is looked after by player agent David Riolo, who managed Karmichael Hunt for his switches to AFL and rugby.

“Matt’s very happy in league but if there’s an approach from the ARU you’d have to look at it,” Riolo said. “We’re about to start looking at all the legitimate options. The Bulldogs are on the top of the list and then we’ll go from there.

“Burto might end up the NFL. Who knows? At least you don’t get punched in the head because you’re wearing a helmet.”

Rugby is now in a strong enough position to make a competitive offer. McLennan has overseen a huge financial turnaround in the last 12 months which has put the sport in the best position to chase NRL players since the likes of Israel Folau, Hunt and Suliasi Vunivalu switched codes.

“All our commercial support has lifted now that we’ve got the World Cup,” he said. “The team is performing and our gate receipts in Brisbane last week were the biggest since 2013.

“With the World Cup we’ll take north of $100 million

“We’ll have a new media rights deal to negotiate in 2025.

“And we’ve got the Lions tour in 2025 (an expected $80million profit). We’ve been able to turn things around big time.”

The NSW Waratahs would be the obvious destination for Burton although the Queensland Reds and the Brumbies will no doubt be interested.