The Western Bulldogs want to be challenging for premierships for years to come. But they’ve got some big list questions to work out first. Read our full list analysis.

Many expected the Western Bulldogs to either contend for a premiership or go one better in 2022 after a grand final appearance last year.

Luke Beveridge’s side has been extremely inconsistent, when many thought they would go on and become a force.

Injuries haven’t helped, but how can the Bulldogs deliver on the promise they have with one of the great lists in the AFL.

WHERE THEY ARE AT

The Bulldogs have a staggering amount of talent on their list, especially in their midfield where Marcus Bontempelli, Jack Macrae, Josh Dunkley, Bailey Smith, Adam Treloar and Tom Liberatore are arguably unrivalled in the comp.

The Bulldogs also have two of the best ball-using defenders in the game in Caleb Daniel and Bailey Dale, a key forward in Aaron Naughton who could be anything and can completely dominate games. Tim English’s emergence as an elite ruckman has been a big positive for the Bulldogs.

Tim English is starting to emerge as a premier ruckman in the competition, and in reserve the Bulldogs have top draft picks Jamarra Ugle-Hagan and Sam Darcy by the way of their Next Generation Academy and father-son.

But for all their top-talent you get the sense that the Bulldogs aren’t quite the complete team yet.

They are lacking a real top key defender, with tall forwards able to cause them damage far too often.

The Bulldogs aren’t also good enough when it comes to one-on-one defending.

So with an average age of around 25, the fourth oldest in the competition, there are some issues that Beveridge needs to fix if the Bulldogs are going to make the most of their premiership window. Bailey Smith should soon re-sign with the Bulldogs. 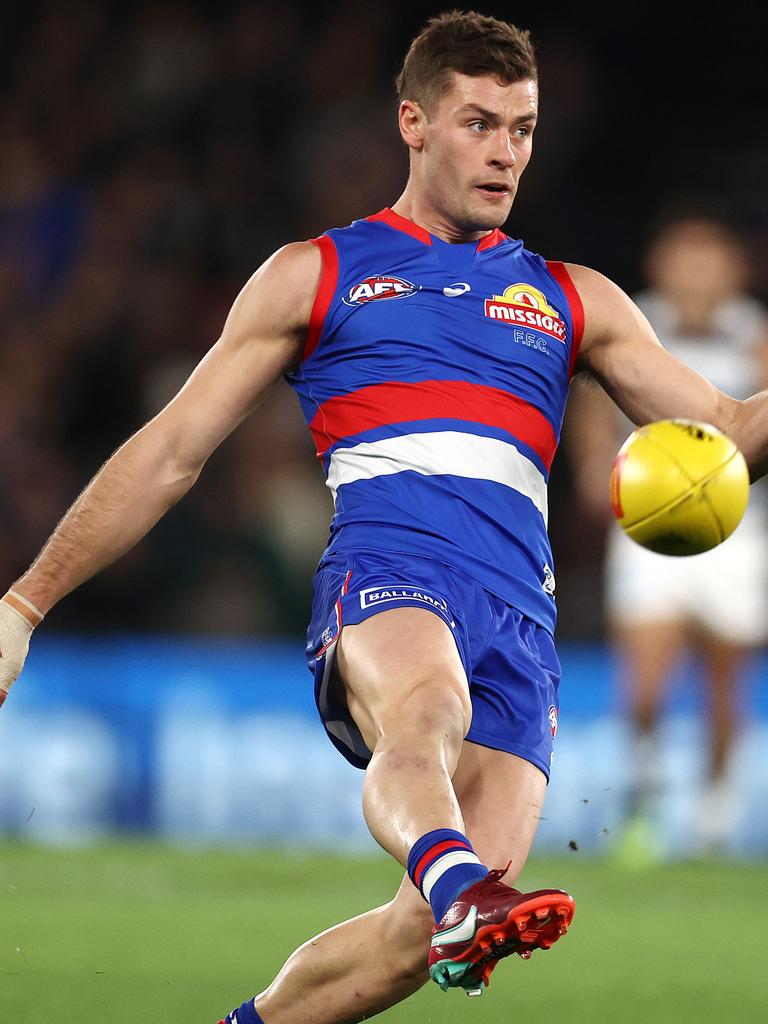 The Bulldogs have tried to fix some of their issues in recent years by pouncing on unwanted players from rival clubs.

Stef Martin came in after they had concerns about English’s ability to deal with the bigger bodies in the ruck, Mitch Hannan arrived from Melbourne to provide a forward option.

Tim O’Brien has arrived from Hawthorn to help with their key defensive stocks.

There’s a big list of players out of contract at the end of this season that the Bulldogs need to re-sign.

English is about to turn his back on Western Australian clubs and re-sign with the Bulldogs, Smith should join him soon – although there’s a lot of debate about how much he is worth.

Daniel and Dale are out of contract and should re-sign.

The one of interest will be Dunkley, after he sought a move to Essendon at the end of 2020.

WHO’S OUT OF CONTRACT 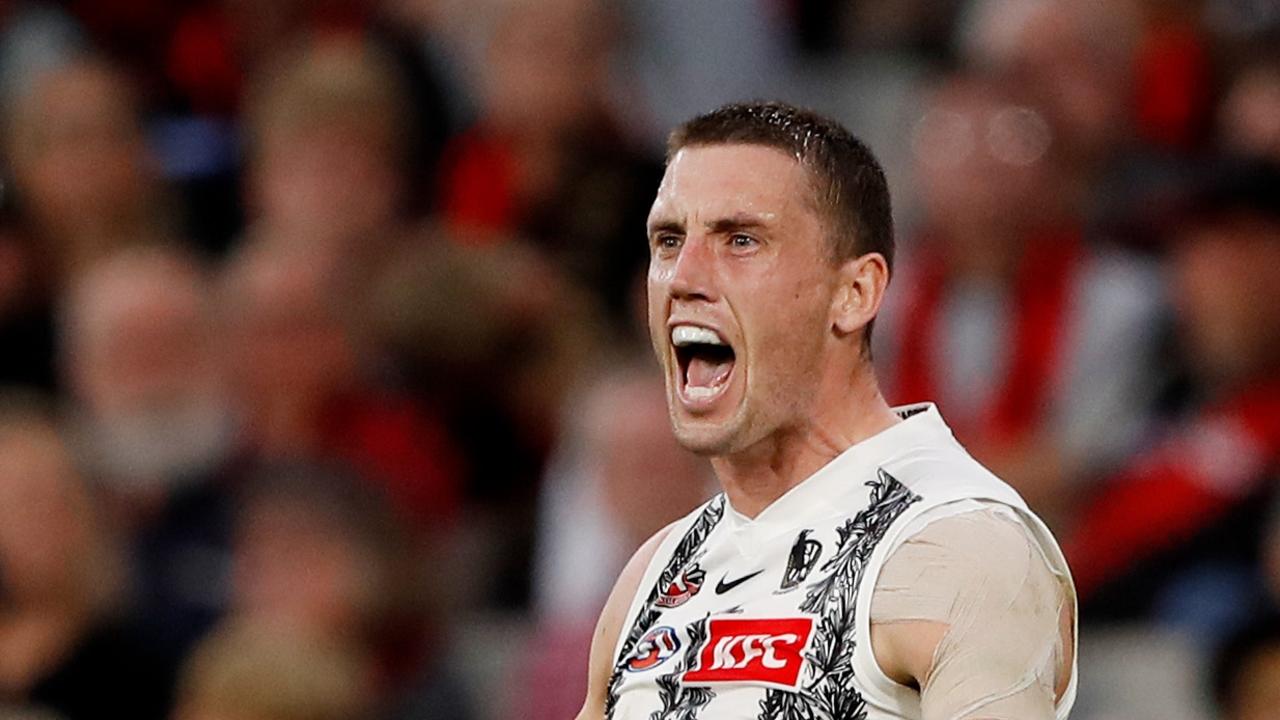 Darcy Cameron has flourished without Brodie Grundy in the Magpies side.

Daniel McStay – The Brisbane key forward is being heavily pursued by clubs in Melbourne and it would be worth the Bulldogs time having a look at him. He would be a very good support for Naughton and the returning Josh Bruce.

Griffin Logue – Has been dropped twice this season and put contract talks on hold with Fremantle. Would be a good key defensive option for the Bulldogs.

Darcy Cameron – Could the Bulldogs again take advantage of Collingwood’s salary cap situation? Cameron is emerging in the league with Brodie Grundy injured. But when Grundy does return, where does that leave Cameron who can play ruck and forward and would form a good combo with English. 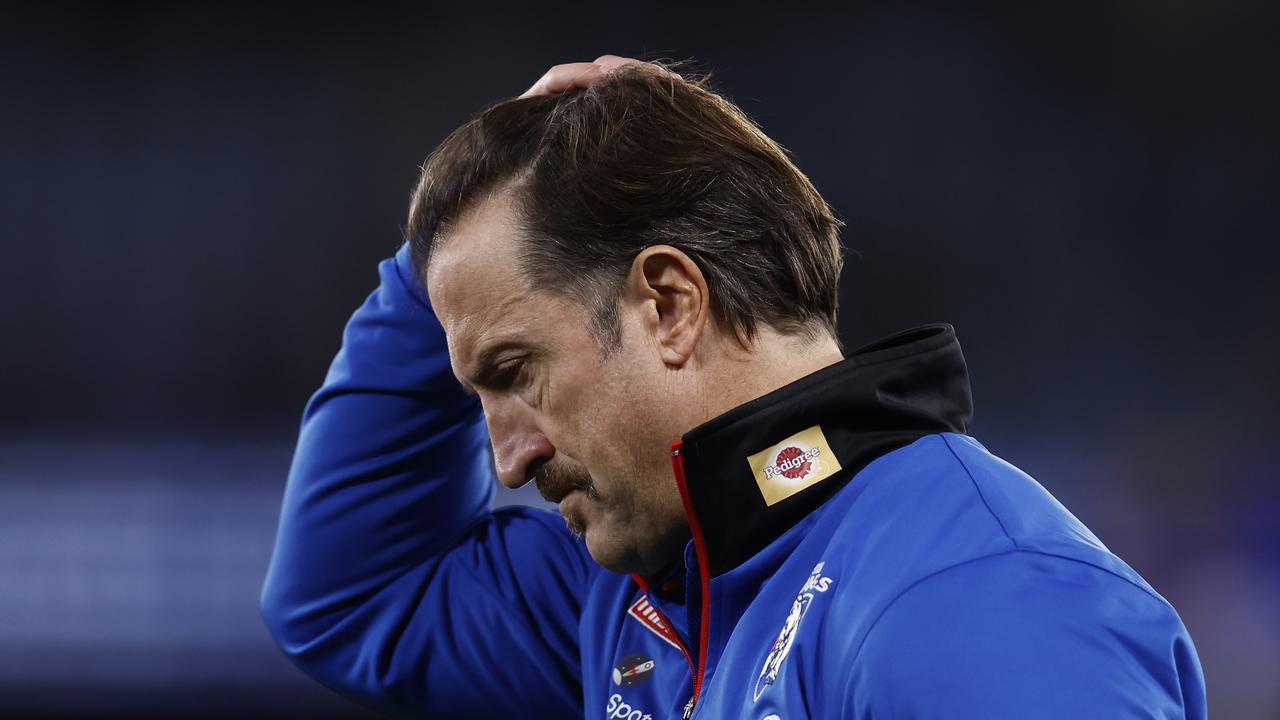 Luke Beveridge has work to do to turn the Bulldogs into a contender again.

THREE BULLDOGS THAT A RIVAL CLUB WILL BE LOOKING AT

Josh Dunkley – Asked for a trade at the end of 2020 but says he is happy at the Dogs. But hasn’t signed a new deal, and there is some chatter that the South Australian clubs could look at him.

Bailey Williams – A “pre-agent” with his contract expiring at the end of 2023, could a rival club pounce early? Has shown some good form for the Bulldogs in defence.

Tim English – Is likely to re-sign very soon but until he does West Coast in particular will be looking at ways they could try and get the West Australian home.