Geelong coach Dan Lowther has provided an eye-opening insight into the taxing life of an AFLW player as the push for the league to go professional ramps up. Plus, Round 7 teams and tips.

Geelong AFLW players are not leaving the club until close to midnight as they try to cram as much rehab and education in as possible into the time they have at GMHBA Stadium while still working full-time jobs.

Cats coach Dan Lowther, who himself works full-time in the education sector while juggling the responsibilities of being a senior coach, said while finances would dictate when AFLW becomes professional, the players were crying out for more time to improve and grow the game.

“The answer always comes down to finances and the availability of money to make that happen,” Lowther said.

“I know there has been a lot of talk in the media and the AFLPA around a time frame but my view is the players clearly want to be doing what they are doing in a football capacity as often they can, so full-time is clearly the endpoint, and that is why they are at the club from 4.00 all the way through until 11.00 at night because they want to leave no stone unturned to do what they need to do.

“Whether that be vision, conversations with coaches, extra touch, recovery or massages, all those types of things take time, so it has got to the point where players are saying, ‘give us the time, but we need to be financially backed from a professional perspective to be able to sustain that’. 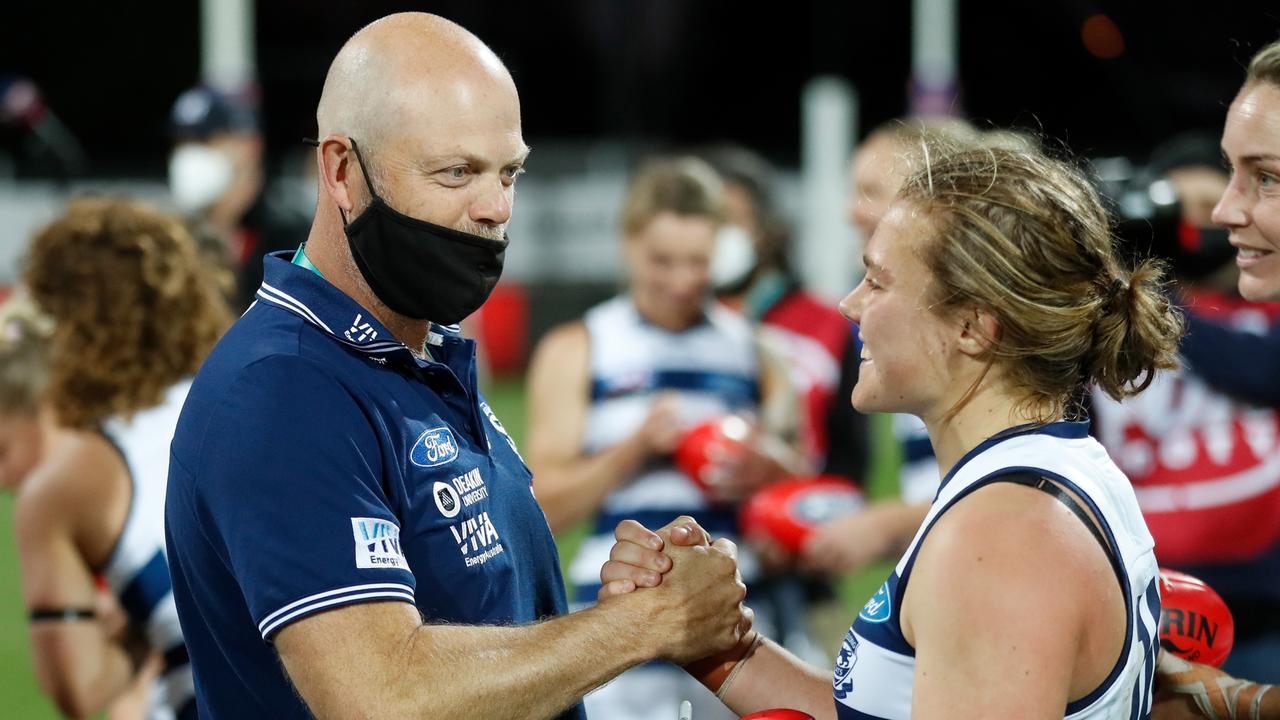 The constant changing of AFLW fixtures this season due to Covid cases at clubs has forced Lowther and other staff and players to rearrange their professional lives, which he said was only made possible thanks to having understanding employers.

But, Lowther admitted it had been a challenging time for part-time players, coaches and staff.

“The fact the sport is a part-time professional game has probably been the most challenging for staff to organise their lives around the time and commitment they give to AFLW,” he said.

“We have doctors, builders, and professionals like myself who rearrange schedules to make sure we can stick to a certain timetable and then all of a sudden the timetable is flipped and those changes can’t be undone.

“So on any given training day you might be down on staff numbers, down on coaches, down on players who with their work commitments can’t get there to a certain time.

“It sounds like everyone in the workforce has understanding employers but there is a commitment to doing your job so that part is hard, that constant flipping and reorganising people’s lives and work to try to fit in a game that wants professional applications given to it, but the time factor is a burden for everyone involved.”

AFL Women’s players have earmarked 2026 as the season they want to become fully professional.

But the competition’s union has not ruled out reaching a full-time capacity earlier than its four-year target.

AFL Players’ Association boss Paul Marsh said creating a professional AFLW was a “strong ambition” but was one that had received overwhelming support from players during recent consultations.

The date is part of a player-driven vision model — with the AFLPA canvassing players on issues relating to the entire competition and their experiences. AFLW players have called to be made professional by 2026. Picture: Getty Images

Marsh strongly believes that nominating the 2026 season sets a realistic and achievable target.

“But by and large, that’s the time frame that we’re talking about. I say deliberately ‘by’ 2026 – that doesn’t put a limit on it getting there pre-then.

“We think with the expansion, new teams, new players and giving the clubs and the industry time to get itself geared up, we think it’s a realistic and reasonable time frame.”

The AFLPA continues to work with players on the overall vision for the competition, which is hoped will be finalised in coming months.

AFLW players are currently contracted for 23.5 weeks per year, and a total of 338.5 hours across the pre-season and season proper.

But many are putting in far longer hours at clubs and training, with many also juggling full-time jobs and study along with their elite football career.

The collective bargaining agreement between the league and players is set to expire on October 31, coinciding with the expiry of the current broadcast deal and men’s CBA. Pursuing a joint CBA between the two competitions has received support from some players and has not been ruled out, but it is not considered critical to implementing the players’ vision for the game.

The top two paid players at each club are excluded from any calculations for additional services agreements, meaning some players could earn well over $100,000 without it being included in a club’s figures.

The league launched its vision road map for the competition in late 2021.

It said that it aimed for AFLW players “to be the best paid sportswomen in a domestic competition in the country”, with other “aspirational targets” including equal participation and representation in community football by 2030, and at least 50 per cent of AFLW senior coaching positions held by women.

Western Bulldogs skipper Ellie Blackburn said this week that she enjoyed both working and playing football, but Marsh said choice for players was the ultimate outcome. “From the player perspective, it’s having the option as to whether they work and play footy,” he said.

“That’s one thing we are trying to find as part of this solution – we don’t necessarily want to take work off players.

“We want them to have the choice. Because there are lots of players who will look at this and say ‘I want to do both’.

“There’s a number that will be attached to that at the right time, and that’s a product of hours and games and all the rest of it. But having the choice of whether you’re footy full-time or whether you’re work and footy is where we want to get to.”

The players’ target of 2026 is the result of an “extensive process” that has lasted over 12 months.

“We’ve got strong ambitions here to get to this point as quickly as we can,” Marsh said.

“And it will be good for the industry if we can get to this point.

“It’s something that we’re passionate about and determined to get to.”

North Melbourne and Collingwood will be intent on staking their premiership claims when they meet in a crucial AFLW clash this round.

North sits fourth on the ladder, one win ahead of the sixth-placed Magpies and within striking distance of frontrunner Fremantle.

Gold Coast will be trying to keep in touch with the top-six when it opens the round against Brisbane Lions in the Q Clash, while West Coast will be hopeful its improved form continues against Richmond at the other end of the table.

Scroll down to see who our experts are tipping.