AFLW: Sarah Perkins opens up on family pain and why she joined Hawthorn

Part of Sarah Perkins knew she was running away.

The AFL Women’s star is known for staring down her opponents, trolls and her doubters.

But when it came to facing her own grief and overwhelming emotion, Perkins just wanted to hide.

Her dad, Ken, a through-and-through Hawk, was lost to cancer just before Christmas.

It was an escape – she knows that now. But despite best efforts to lock away her sadness, it was a suitcase she would eventually have to open.

And that time is now, returning to her home state and the warmth of her family in order to process her grief and play football at the club he loved so much, under none other than former premiership coach Bec Goddard.

“It was a huge decision to come home, and definitely not one that I took lightly,” Perkins told the Herald Sun this week.

“I didn’t hear from the Hawks until a couple of weeks ago, and I didn’t really think about it too much after I spoke to them.

“He passed and I ran away from the issue.” Ken was diagnosed with lymphoma on the day that Perkins left hotel quarantine in 2020 and ongoing Covid restrictions in both Queensland and Victoria meant that time together was limited as his battle was waged.

“We didn’t think that we’d have the limited time that we did,” Perkins laments.

“Every time I seemed to come back, there was more border controls.”

Despite Ken’s loyalty to the brown and gold as a live-and-breathe Hawk over some 40 years – Perkins says “he’d come up with his own chants, he drove the van, everything” - was inherited by his kids, with Perkins recalling a day as a kid that she shared a kick with a bloke named Sam Mitchell, with whom she now shares the hallways at Hawthorn.

To say he was rabid is an understatement.

But Ken could be spotted at Crows or Suns games where his daughter featured, resplendent in a club polo and cap complete with her player badge.

His Hawthorn allegiance almost mattered little when his Sarah took the field.

He saw Perkins decked in Hawthorn colours when she played for the team’s VFLW outfit a few years back, winning the 2018 VFLW premiership, but as for what he’d think of her lobbing at Waverley Park in this sign and trade period is pretty obvious. Perkins and her dad Ken with the 2019 AFLW premiership cup. Picture: Supplied

Perkins’ parents split up when she was a kid, but she credits her mum Sandy for her strength, particularly throughout Ken’s battle, in supporting her children.

And there’ll be a bit more of that to come in coming months, Perkins jokes.

“I’ve actually got a suitcase of washing here for her to do,” she laughs.

As AFL Women’s enters a new era, so does Perkins.

Her father’s passing came just eight weeks before she endured torrid body-shaming abuse, withstanding being gripped by grief to hit out at trolls.

It’s been the toughest time in her life, she concedes.

But her footy focus remains clear.

After a flag at Adelaide, Perkins has worn the jumper at Melbourne and most recently at Gold Coast, where she admits she weighed up staying, given the foundation the Suns have set since joining the competition in 2019.

But her heart is in Victoria, and at Hawthorn, there’s a little extra.

“The chance to come back home and be closer to family and I guess just really spend some time grieving the passing of my dad properly, being close to my mum and my nephews was a huge pull for me and my brother and sister,” Perkins says. 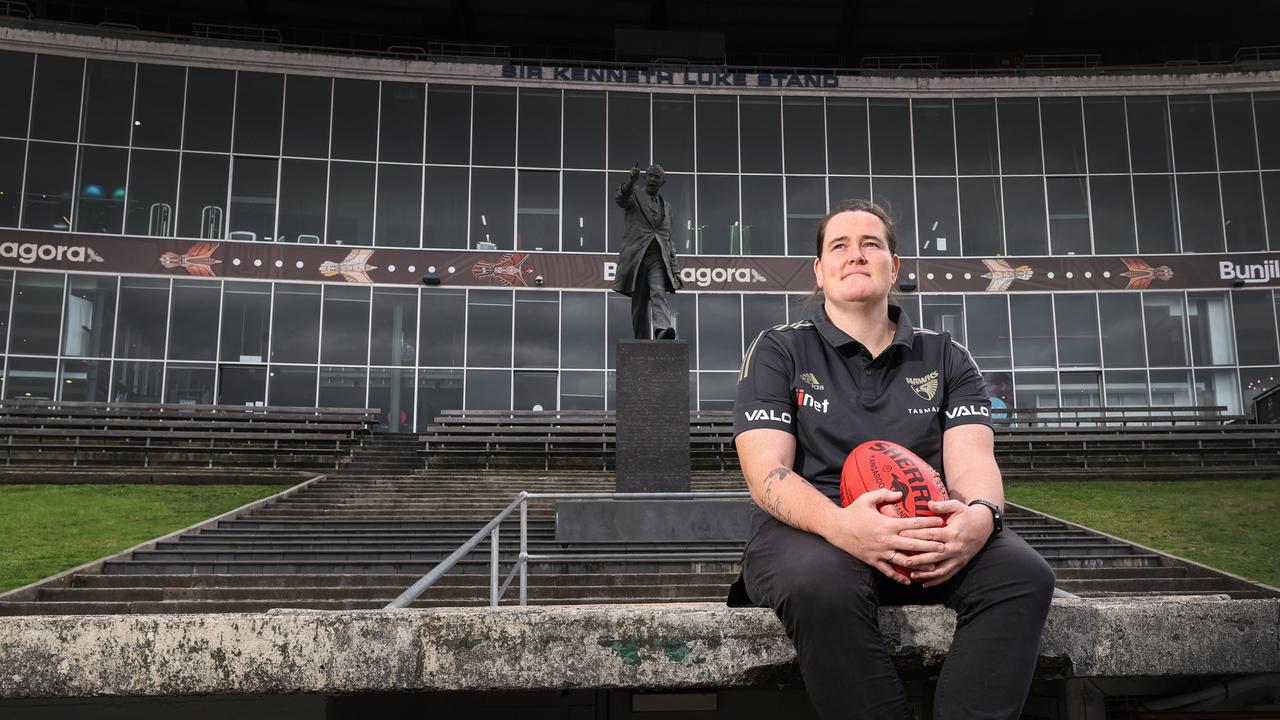 It’s about more than footy for Sarah Perkins as she prepares for life as a Hawk. Picture: David Caird

“I had to go with my heart, which was to come back home and thankfully I’ve ended up at the club that I grew up barracking for and my dad spent 40 years of his life volunteering and hanging out and cheering them on as his fourth child.

“It’s all realistically a fairytale for me to come back and be close to them and have a chance to really connect and think about my dad every time I walk into the footy club, which I think will help with my grieving process.

“Some sort of fate has aligned … there’s the pull of family and they’re the family club but there’s a strong connection here for me.

“It’s not easy to talk about, but I know how much joy the football club brought my dad and my siblings growing up and I hope that we as a women’s team can do the same.”

Originally published as AFLW: Sarah Perkins opens up on family pain and why she joined Hawthorn