When picking the best Broncos lineup of all time, there was always going to be some hard luck stories. But one cut was tougher than all the rest. Subscribe for the full squad.

It’s a fair question to ask when you look at this greatest Broncos team and wonder how on earth there is no room for Wally Lewis, The Emperor of Lang Park, quasi-Queensland premier and all things rugby league royalty.

There is never any doubt The King is the greatest State of Origin player, but if there is one tragedy from the birth of the Broncos, it is that their rise to the big league came just as Wally’s star was starting to fall.

Lewis was approaching his 29th birthday when he led the Broncos onto Lang Park for their top-flight debut against Manly in 1988. There were embers of Wally magic in the maroon-and-gold, but his 46-game Broncos chapter was marred by his shock sacking as captain by Wayne Bennett, prompting his career finale at Little Brother battlers Gold Coast.

While The King’s legacy will always burn beautifully, his departure paved the path for this team of champions. The biggest omission? Wally Lewis is an immortal - but his two seasons at Brisbane weren’t enough for a starting spot in their greatest ever team.

Finished his career at five-eighth but his first nine seasons at the Broncos were devoted to his silky incisions from the backfield. Won three of his four premierships in the No.1 jumper, headlined by his dismantling of the Roosters in the 2000 decider which earned him the Clive Churchill Medal.

Fijian flyer Lote Tuqiri had strong claims but it’s hard to go past the all-action, thrashing style of a winger who fought tackles like he was defending his lifetime savings. The fifth most-capped Bronco in history with 274 games and Hancock’s 122 tries places him third on the club’s all-time tryscoring list. Dependable until the 80th minute.

Peerless as Brisbane’s finest centre and in the conversation among the greatest attacking centres of all-time. The Pearl’s balance, speed and ability to use his lethal fend as a springboard to the tryline captivated league fans for a decade. His matchwinning tries in the 1992 decider and World Cup final were magical moments. Remarkably, he scored four tries in a game on five occasions for the Broncos.

Chris Johns was a strong candidate but Hodges gets the nod on the back of skill, presence and late-career maturation which saw him captain the Broncos in the 2015 grand final. Such was his talent, he was blooded in first grade at 17 and not even a famous fallout with Wayne Bennett over his signing with the Roosters could halt his return to Red Hill for a glorious decade. Outstanding at fullback in Brisbane’s charge to the 2006 premiership.

Never before. Never again. All the champions have a special magic of their own and so it was with Wendell, who was the most lethal winger in the world in his prime. Just ask him. Cocky, charismatic and supremely talented, Sailor revolutionised wing play with his brutal kick returns which effectively gave the Broncos another forward. The Broncos have had enjoyed the primes of some of the greatest props in the game’s history - and few were feared quite like Shane Webcke.

Often lived in Alfie’s shadow but one word sums up Walters - winner. ‘Kevvie’ was the Broncos’ talisman, winning five premierships at the club, highlighted by his captain’s knock in the 2000 grand final. Walters could find gaps himself but also had sublime touch and vision to make others look good. His trademark ‘out balls’ for a flying Steve Renouf would be delivered with the precision of a surgeon.

The Little Master stood ever so tall. His tiny 165cm frame belied his gargantuan courage and ferocious will-to-win in a 258-game journey. When the game was on the line, Langer was the halfback champion who wanted the ball. Countless times he saw game-changing moments visible to nobody else. Wayne Bennett regards ‘Alfie’ as the greatest Bronco. Enough said.

Straight talking and played accordingly. There was not a Broncos victory without the sight of Webcke powering through the midfield with his bullocking frame. The 254-game warhorse was as consistent as he was relentless and capped a fine career with a farewell lap of honour in the 2006 grand final.

The one position where the Broncos have not produced a blue-chip champion but 182-gamer Kerrod wasn’t far away. An excellent hooker who brought flair, incision, guile and cunning in an era when many rakes played as bash-and-barge-style props.

Played only 118 games for the Broncos but his influence cannot be undersold. Petero Civoniceva is so unlucky to miss out but ‘Lazzo’s’ signing changed Brisbane’s destiny. His arrival from Canberra instantly triggered back-to-back premierships for the Broncos and a golden age was born. He was a colossus in the front row oozing a Midas touch wherever he went. 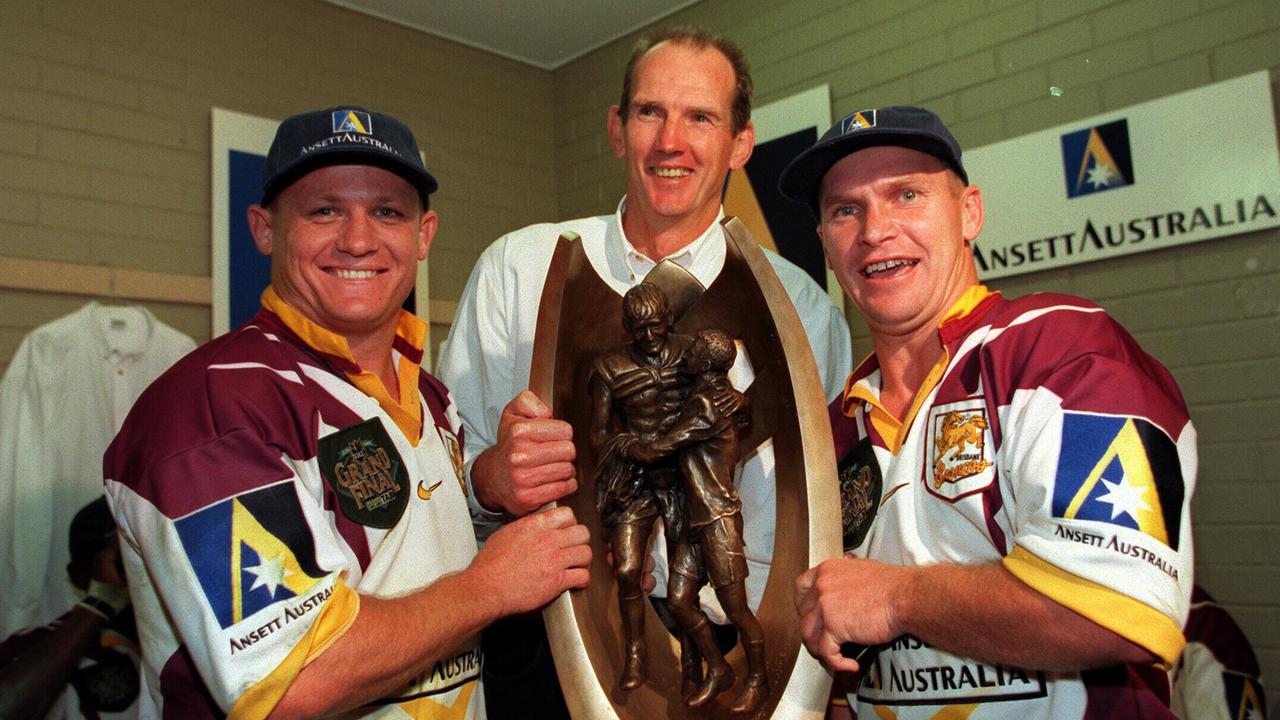 The scariest Bronco in history - ‘Tunza’ Carroll included. Tallis played with such competitive fire he could shape games and break opponents with his sheer will and when he ran with an unrivalled ferocity, the rest of the Broncos went with him. The Raging Bull was superb in the 1998 grand final that won him the Clive Churchill Medal.

Brad Thorn narrowly misses out to Thaiday, who was the spiritual leader of Brisbane packs with his brutal running and defensive bravery that netted a premiership ring in 2006. The club’s third most-capped player, Slammin’ Sam played 104 more matches for the Broncos than Thorn and unlike Thorn, he stayed loyal to Brisbane until the end of his 304-match career.

Tonie Carroll hit harder but no Broncos forward endured longer than ‘Cozza’. The Broncos’ most-capped forward with 347 games, Parker was a midfield ironman who tackled his heart out and developed sublime second-phase play late in his career. Over the course of his career, he sacrificed at least $1 million to remain a one-club Broncos legend.