George Kambosos’ super fight against Vasiliy Lomachenko has collapsed, opening the door for a $10 million grudge match in Australia.

George Kambosos Jr’s showdown with Vasiliy Lomachenko has collapsed - opening the door for Devin Haney to take on ‘Ferocious’ in a $10 million super fight at Melbourne’s Marvel Stadium on Sunday, June 5.

Lomachenko had agreed in principle to a deal last month, but Kambosos Jr’s promoter Lou DiBella confirmed the two-time Olympic gold medallist has withdrawn after electing to remain in Ukraine to defend his country against the Russian invasion.

Lomachenko, one of the best pound for pound fighters in the world, is a member of a territorial defence squadron in Ukraine. Under Ukrainian law, men aged 18 to 60 deemed fit to serve in the army are banned from leaving the country, although efforts were being made for Lomachenko to be given dispensation to fight Kambosos Jr.

But the 34-year-old has insisted on staying home to be with his family, meaning Haney shapes as the Plan B option to face Kambosos Jr in the Sydneysider’s first world-title defence on Australian soil.

“How can anyone question? the fight he’s going through right now is much bigger than any boxing match,” DiBella told ESPN this morning.

“We made a deal with him (Lomachenko), the deal was literally done before the invasion, we wanted to give him any chance within reason with our allowable timetable.

“We have nothing but the utmost respect for his decision. “Kambosos wanted to make sure once we made that deal that Lomachenko had ample time to decide. ... We said all along we would try to make the biggest fights and we did that today.”

Haney has now been offered the opportunity to fight Kambosos Jr and the American is certain to jump at the chance, with negotiations set to ramp-up in the coming days for the Marvel Stadium blockbuster.

Haney (27-0, 15 KOs) owns the WBC lightweight title while Kambosos Jr (20-0, 10KO) is the WBC’s franchise champion. The Australian also owns the other three major 135-pound titles and is recognised by many as the undisputed lightweight champion.

If Kambosos and Haney fight each other, the debate will be settled once and for all.

Kambosos Jr told News Corp last week he is poised to destroy Haney after he shocked the boxing world with his stunning defeat of Teofimo Lopez last November. “I would fight both Haney and Lomachenko on the same night. That’s how confident I am,” Kambosos Jr said.

“I have already beaten the best guy in our division in Lopez, I beat him up, so Lomachenko or Haney are not as great a threat.

“Haney is a good talker, but behind the scenes he is a scared little boy. I would brutally knock him out.

“He has never had the pleasure of actually taking the belts off a champion and putting it around his waist.

“Whoever I fight next ... I will be inflicting major damage.”

Kambosos Jr faced the prospect of being stripped of his belt if he refused to fight Lomachenko, who was the mandatory, but with the Ukrainian out of the equation, Haney’s big moment will arrive Down Under. 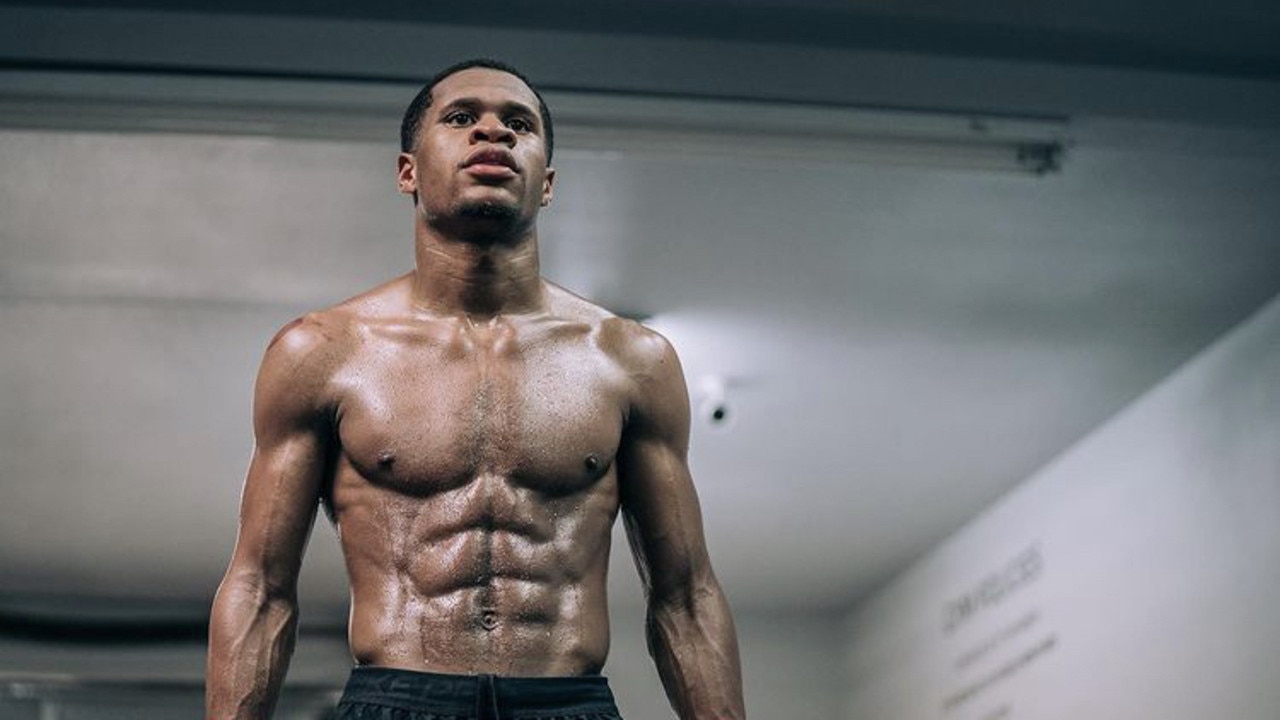 Kambosos has slammed Haney, calling him a “scared little boy”.

“The WBO had made it very clear that it would strip George Kambosos Jr. if he were to fight anybody other than the mandatory, Vasiliy Lomacheko,” his manager Peter Kahn told ESPN.

“George did not want to relinquish any of the belts and therefore was going to ... fight the mandatory.

“In his mind he was always going to win and then would move on to fight Devin Haney.”

“There were other factors at play regarding the deals that were presented but it also served another purpose, which is to keep the belts intact.”

George Kambosos has slammed Devin Haney as a “scared little boy” and warned the unbeaten American to prepare to be “brutally” knocked out if their super fight comes to fruition.

News Corp understands promoters are in the advanced stages of negotiations for Kambosos’ maiden world-title defence on Australian soil, slated for Melbourne’s Marvel Stadium on June 4.

Two-time Olympic medallist Vasiliy Lomachenko was the frontrunner to face Kambosos, but that now appears unlikely following his decision to enlist in the Ukrainian army to repel the Russian invasion.

That has opened the door for Haney (27-0, 15KO), the fast-talking American who has put Kambosos on notice, warning he will terrorise the Sydney sensation with his speed and “ring IQ”.

Kambosos walked away with four belts following his stunning defeat of Teofimo Lopez last November, but there is one world title left to complete the Full House - the WBC strap owned by Haney.

A Kambosos-Haney showdown could be announced as early as next week and ‘Ferocious’ laughed off suggestions he is running scared of the American, saying he is unstoppable in the lightweight division.

“I would fight both Haney and Lomachenko on the same night. That’s how confident I am,” Kambosos said.

“I have already beaten the best guy in our division in Lopez, I beat him up, so Lomachenko or Haney are not as great a threat.

“Haney is a good talker, but behind the scenes he is a scared little boy. I would brutally knock him out.

“He has never had the pleasure of actually taking the belts off a champion and putting it around his waist.

“Whoever I fight next ... I will be inflicting major damage.”

Kambosos’ life has changed forever in the afterglow of his Lopez boilover which stunned the boxing world.

The 28-year-old is no longer the underdog who made $800 and personally sold tickets to fans for his first professional fight at the Croatian Club in Punchbowl in 2013. He is now the top dog with the wealth to construct his own boxing gym.

He has gone from the hunter to the hunted, but Kambosos (20-0, 10KO) has a warning for his rivals - he will never switch off.

“I told the Americans before I won the world titles: I am very stubborn. Nothing has changed. Haney or Lomachenko or whoever will not get these belts off me.

“My boxing has gone to a whole new level since winning the belts.

“I am hitting harder, my conditioning is incredible at the moment. My lifting and power has gone through the roof.

“I am going to keep doing more damage to these guys. Let them keep underestimating me and I will keep proving them wrong.

“The stubbornness comes from the doubters who pushed me to the side and said I wouldn’t get there, said I wouldn’t do much. I have that chip on my shoulder. I have that mongrel inside me. Other guys get to the top and the fame and money comes and they lose their hunger, but my desire is even stronger.

“I am a machine right now.

“These belts have not made me complacent. The baggers can say what they want. I know that Australians and Greeks are 100 per cent behind me.

“When I do step inside that ring real soon against the biggest names for the biggest fights, I will have a whole army lifting me up every step of the way.

Kambosos remains tight-lipped about his next opponent but says a formal announcement is imminent. Matchroom boss Eddie Hearn told British media on Friday: “June 4th is the proposed date, so we’ve got two or three weeks to make the fight (Kambosos-Haney), really.”

“It’s going to be a sellout,” Kambosos said of his title defence on Aussie soil.

“Whatever the capacity is, we will fill the stadium. We will get 40-50,000 people to fight, this will be the biggest fight in Australian history and I’m confident it will sell out.

“These are big events, big fights and the negotiations take time. Hopefully we will have an outcome very soon.”