Cameron Smith is coming back to haunt the Blues with the Maroons legend revealing there is just one hurdle to clear before joining Billy Slater’s coaching staff.

Cameron Smith is coming back to haunt the Blues with the NRL champion revealing his desire to help rookie Maroons coach Billy Slater bring the Origin shield back to Queensland.

Queensland Rugby League is in the advanced stages of negotiations with Smith, who declared he is ready to return to Camp Maroon and help his great mate Slater inflict more misery on Brad Fittler’s Blues.

Smith, the most-capped player in Origin history with 42 appearances, and Slater were key architects of Queensland’s golden era, when former coach Mal Meninga steered the Maroons to nine series wins in a decade between 2006-15.

Now the band is coming back together, with Slater keen to appoint Smith in a mentoring role as part of Queensland’s army of coaching assistants that already includes another retired legend in Johnathan Thurston.

Smith has yet to formally ink a QRL deal until a number of conditions are met - he is reluctant to enter a Covid-style Origin bubble - but the former Maroons skipper wants to help Slater create another Meninga-style dynasty.

“I am absolutely keen to help out,” Smith said. “Billy is one of my closest mates and it’s not only helping the football side, it’s wanting to help out my good mate as well.

“I want to make sure I give Billy a successful start to his coaching career, I’d like to see him coach the Queensland team for a long time like Mal Meninga did and enjoy success with the Maroons.

“If I’m someone he would like to talk to or confide in or ask for advice, I will certainly be available to him anytime.”

The prospect of future NRL Immortal Smith returning to Camp Maroon is a major shot in the arm for a Queensland team that endured a horror 2021 series.

Aside from two heavy defeats, including a record 50-6 hammering in Game One, Queensland were rocked by the Ronaldo Mulitalo eligibility scandal and a Covid breach that saw Jai Arrow kicked out of Camp Maroon. 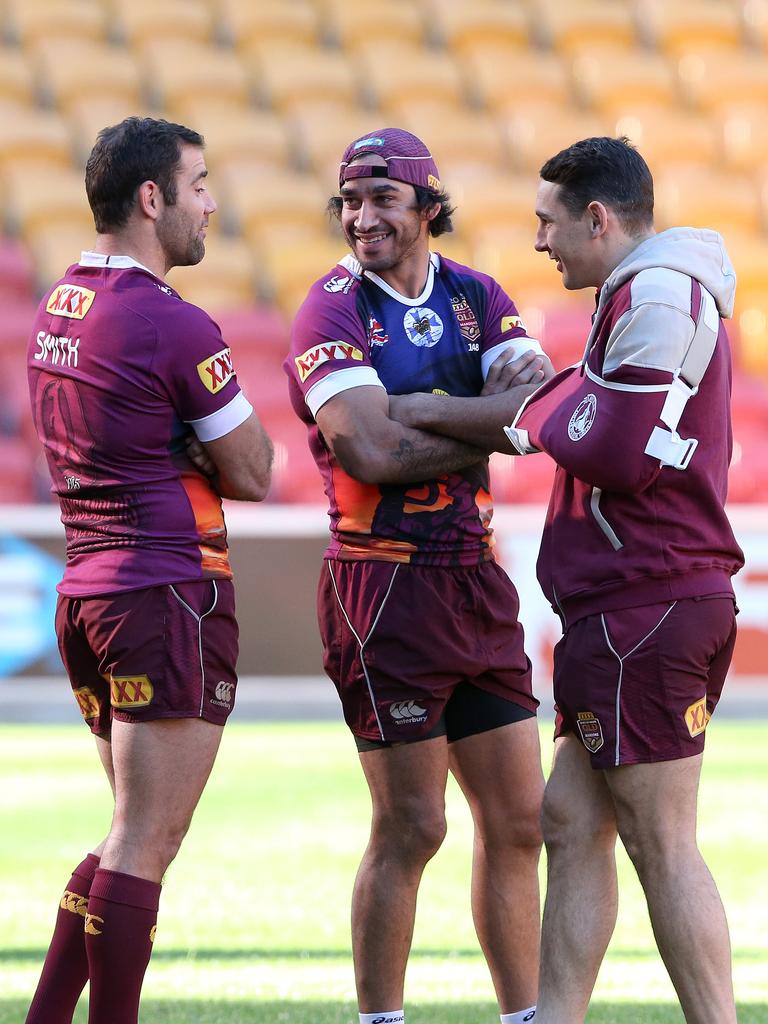 But the sight of a Slater-Smith-Thurston trinity this season is sure to have the NSW camp nervous about a Queensland fightback.

Smith, who retired from the NRL after leading Melbourne to the 2020 premiership, now resides on the Gold Coast. He confirmed he had fielded an approach from Slater, but says there are some hurdles to clear before his Origin return is formalised.

“When Billy first contacted me about the opportunity when he was confirmed as Queensland coach, I was chuffed that he made the phone call,” the 430-game NRL icon said.

“I’ve had multiple discussions with Billy around a potential role with the Maroons. He felt I could add some value to the footy team and we are working through his idea of what my role would be in the Queensland side.

“I raised a few concerns with him as well. I have some pre-existing commitments away from football that I have to make sure I can fulfil and if I was involved in the Queensland side, that those commitments won’t be affected.

“There are also things going on with the Covid virus and lockdowns around sporting organisations and competitions. It’s not something I’m overly keen to be involved with again, I was involved with bubbles during my time at the Storm in 2020 and I don’t want to be in lockdowns or bubbles again.

“But if I take on any role with the team, I will be taking it seriously.

“Looking at the Queensland Maroons right now, it’s an exciting time for the team.

“They are coming off a series loss last year, a lot was said about their performances, but I see that there is a lot of improvement in the footy side, so if I’m able to help out in any capacity, I am willing to do that.

“Like Billy, I want to see the Queensland team be successful.”

Cameron Smith’s return to the State of Origin fold is yet to be finalised but it has the unequivocal backing of former teammate and Queensland board member Cooper Cronk.

Freshly-minted Maroons coach Billy Slater has approached Smith about being part of his coaching staff alongside another member of the greatest dynasty in Origin history, Johnathan Thurston.

Smith wants to be involved as well, although an official announcement on his return to the Queensland set-up has been put on hold because he is yet to put pen to paper on the deal.

Cronk, a Queensland Rugby League board member who played a role in Slater’s appointment, spent his playing career alongside Smith before the pair’s relationship soured.

Nevertheless, he insists he can see only good coming from Smith’s prospective role with the Maroons.

“For me, Origin is less about the x’s and o’s and more about the ability to come together and unite under a cause,” Cronk said. “Then just let the gun players of our competition go and do their thing — provide an environment for them to shine.

“Billy and Cameron’s story of how they went from kids in Queensland to the Melbourne Storm, to become two of the greatest players to play their position, that stuff right there is enough to feed to the likes of Kalyn Ponga, Harry Grant, Christian Welch.

“It is great — the game’s record holder and one of the greatest players to ever play the game. Along with Billy’s love for analysing and breaking teams down — the lessons they have been exposed to, there is no other player on the planet that has been exposed to what they have.

“Throw (Johnathan) Thurston in and imagine the conversations those three can have.”

Slater has thrown himself into his role with the Maroons, having begun talks with Queensland players as part of his preparations for this year’s series.

“I am pretty lucky — I met with Billy the other day,” Maroons fullback Ponga said.

“To be able to say that I can give Billy a call at any time and not take that for granted …. I am pretty fortunate.” 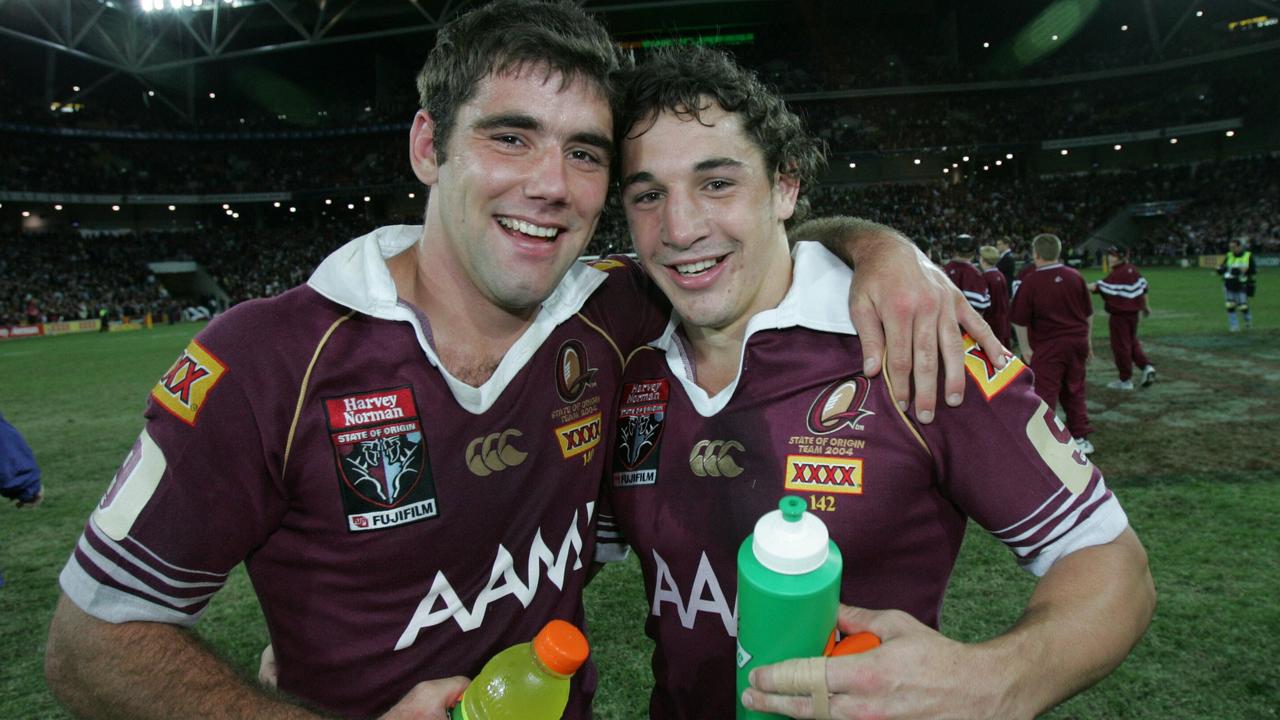 Slater’s gravitas with Maroons players goes without saying but Cronk insists it would be folly to underestimate his tactical nous.

“When you look at it from a surface level — hasn’t coached before — I completely get it,” Cronk said.

“Dive deeper into the person. This bloke got in his car, drove down from Queensland just for the opportunity to play rugby league.

“He goes to Melbourne and represents his state and country 30-plus times. Pass those lessons on, add a little bit of the nuances that make Queensland tick and win Origin, and I think there is a good recipe there.

“He has got it, he has got it. At Melbourne Storm as a player and now as a consultant-coach, he loves it. He breaks down teams to the nth degree, to the point when I was playing with him that it became annoying, stop doing it, we are just going to be more simple here.

“There is a good mix there. But you never know until you jump in the deep end and he is about to find out.”