Formula One: Young Aussie Oscar Piastri in line for F1 debut after Daniel Ricciardo tests positive to Covid-19 ahead of Bahrain Grand Prix

Daniel Ricciardo’s final preparations for the new F1 season have suffered a massive setback – but it could pave the way for another Aussie young gun in Bahrain.

Young gun Oscar Piastri could step in for Daniel Ricciardo in the opening race of the Formula One season in Bahrain next weekend if his fellow Australian is unable to race after a deal between Alpine and McLaren.

The day after McLaren confirmed Ricciardo had tested positive to Covid-19, the Alpine F1 Team announced it would allow Piastri to be used as a reserve driver for McLaren this year.

Piastri was announced as Alpine’s reserve and test driver for the 2022 season after he won the Formula 2 championship last year.

The 20-year-old’s role means he would step in for either of the Alpine drivers, Fernando Alonso or Esteban Ocon, if they were unable to race.

But he could now find himself subbing for Ricciardo, or his teammate Lando Norris, if either of the McLaren drivers were unable to take to the grid this year. Oscar Piastri could be set for his F1 debut. Picture: Mark Thompson/Getty Images

Ricciardo was forced to miss all of the final pre-season test in Bahrain, which wrapped up on Saturday night, after he started to feel unwell last week.

But McLaren has said it expected Ricciardo would be well enough to race in the season-opening Grand Prix next weekend.

Alpine said it wanted to maximise racing opportunities for its young drivers.

“In the spirit of offering maximum racing opportunities to our stable of young talent, we have agreed that McLaren may call upon BWT Alpine F1 Team reserve driver Oscar Piastri in the event one of their drivers is unable to race,” Alpine said in a statement.

“Oscar will remain fully contracted to Alpine and we will retain first options on his services.

“I’m confident he will be fit again next weekend,” Seidl said.

“He is feeling better already. But as we know, it simply takes a few days until you are fully back in good shape.

“But again, expect Daniel to be back in good shape next week.” McLaren has said it expected Ricciardo would be well enough to race in the season-opening Grand Prix. Picture: Clive Rose/Getty Images

Alpine F1 team boss Otmar Szafnauer said Piastri would be Alpine’s reserve “first and foremost” but any racing exposure he got would benefit the young Melbourne racer.

“It would be great if Oscar can get some races under his belt in F1 and get that very valuable experience,” Szafnauer said on F1 TV.

“We’ve talked to McLaren about Oscar being a reserve if they need him. He’s definitely our reserve driver first and foremost, so if there was a conflict, we would take him.

“But if Daniel can’t drive, then we’ll offer him up.”

Considered one of the most exciting emerging F1 prospects, Piastri was striving for an F1 seat this year but had to settle for a reserve driver role with limited opportunities to break onto the grid..

In the past three years, the Melbourne racer has won the Formula 2 championship, the Formula 3 title in 2020 and the Formula Renault Eurocup in 2019.

Daniel Ricciardo’s preparations for the start of the Formula One season have suffered a setback after he tested positive for Covid-19, forcing him to miss the final pre-season test.

After feeling unwell the Australian star was forced to sit out the first two days of the official pre-season test in Bahrain and his team McLaren confirmed in a statement on Saturday morning he had returned a positive PCR test.

But McLaren expected Ricciardo to be well enough to take part in next weekend’s opening race of the F1 season in Bahrain, saying he was already starting to feel better. Daniel Ricciardo’s preparation for the opening race of the season in Bahrain have been hit with a setback after testing positive to Covid. Picture: Getty Images.

“McLaren racing can confirm that after feeling unwell from Wednesday onwards in Bahrain, Daniel Ricciardo has now returned a positive PCR test for Covid-19,” McLaren said.

“Daniel is therefore continuing to isolate in accordance with local regulations.

“Under these regulations Daniel will be released in time for next weekend’s Formula One Gulf Air Bahrain Grand Prix.

“Daniel is already beginning to feel better, and we wish him well for a quick recovery.”

Ricciardo’s teammate Lando Norris completed testing for McLaren on the opening two days and will remain in the car for the final day of the second pre-season test.

The timing is a blow for Ricciardo as he misses crucial testing time in the new car as F1 launches into new regulations for 2022.

Despite missing the final pre-season test, Ricciardo tried to look on the positive side of his Covid diagnosis in that it came before the season had started. 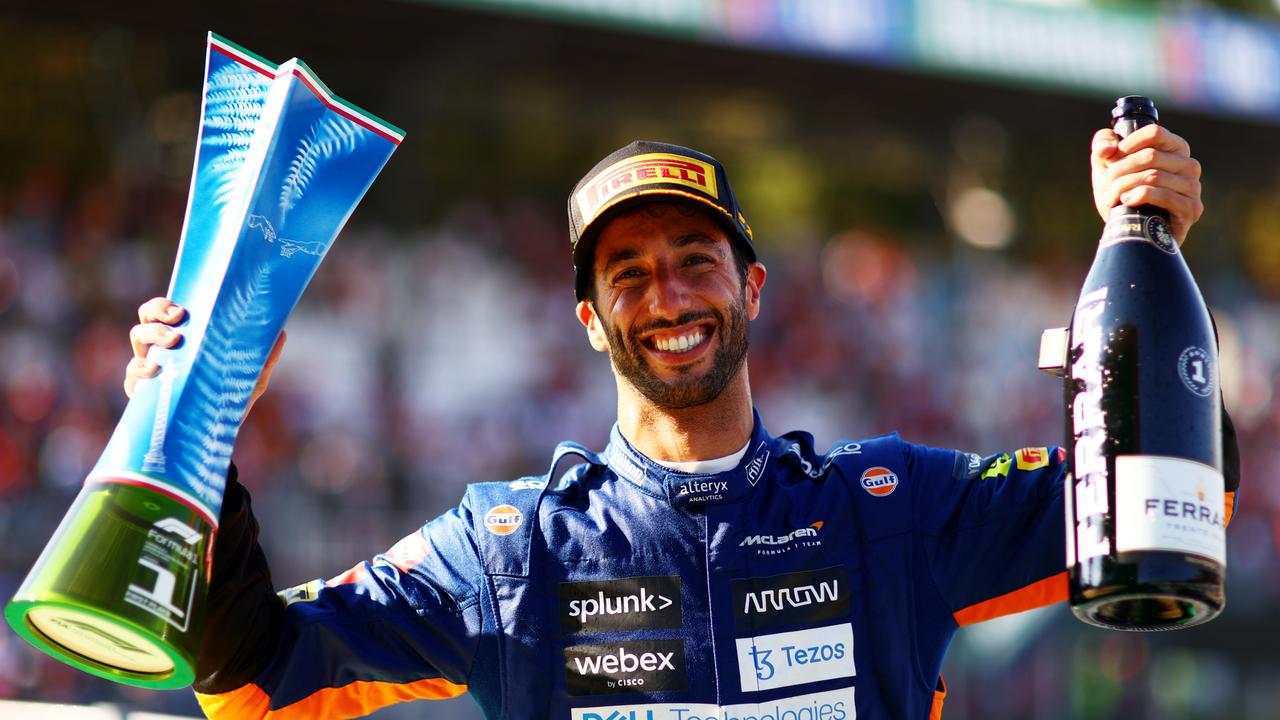 Ricciardo is in his second season with McLaren, finishing eighth in 2021. Picture: Getty Images.

“Better this week than next,” Ricciardo wrote on Instagram.

“Unfortunate to miss the test, but I’m starting to feel better. I’ll stay isolated and just focus on next weekend.

“Big thanks to Lando and McLaren for the heavy lifting, I owe you some beers (milk for Lando).

“Appreciate the well wishes from everyone as well.”

Ricciardo is entering his second season with McLaren, finishing eighth in the standings in his first year with the team in 2021.

His opening season with McLaren was highlighted by a stunning victory at Monza – his first Formula One win since he was with Red Bull in 2018.

Ricciardo showed encouraging form for McLaren during the opening pre-season test in Barcelona two weeks ago.

The opening Bahrain race starts on March 18 before the season then heads to Saudi Arabia and then the Australian Grand Prix from April 8-10.

Originally published as Formula One: Young Aussie Oscar Piastri in line for F1 debut after Daniel Ricciardo tests positive to Covid-19 ahead of Bahrain Grand Prix